Donated Heart Successfully Transplanted After Being Rescued From Helicopter Crash

After the heart was rescued from the helicopter, the doctor carrying it tripped and dropped it on the ground. 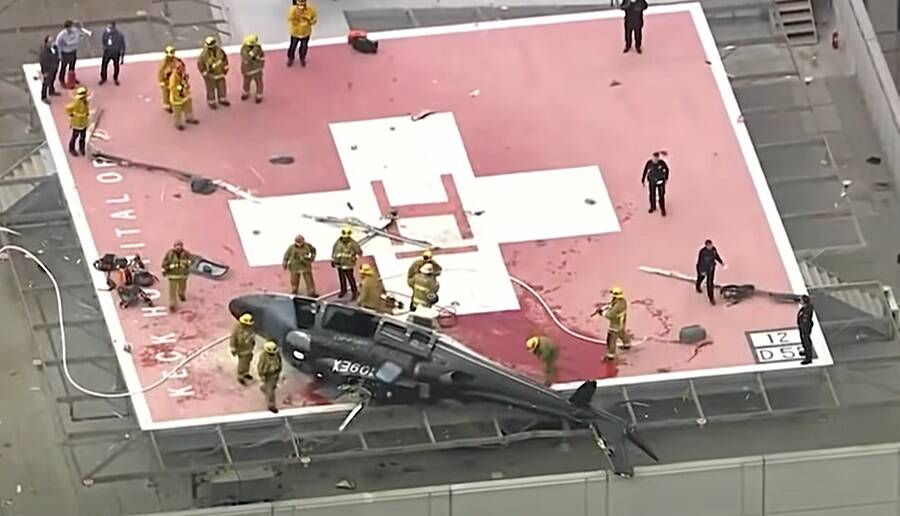 YouTubeA donated heart was rescued from a helicopter crash before being used in transplant operation hours later.

On November 6, a helicopter carrying a donated heart from San Diego to the Keck Hospital in Los Angeles crashed onto the hospital’s rooftop. The heart was safely retrieved from the helicopter wreckage and is now remarkably beating inside a patient’s body.

According to IFL Science, the crash was severe enough that it broke the helicopter’s propellers and tail, flipping the aircraft onto its side. The heart-pounding moments right before the helicopter crashed into the building’s roof were captured on video.

Reports from the scene describe firefighters using hydraulic tools to cut open the crashed helicopter to retrieve the passengers and the donated heart.

Fortunately, the precious cargo on the helicopter was found safe. Two members of the Keck Medical Center of USC that were aboard the aircraft survived the accident without any serious injuries while the pilot suffered minor injuries.

But the rescue was full of dramatic moments. Before the organ could be secured, the doctor carrying the rescued heart tripped on a metal plate attached to the roof, sending the heart rolling across the ground — and spurring hospital staff and rescuers to quickly check on the organ.

“While saddened that two people on our transport team sustained injuries, we feel very fortunate that they were not life-threatening and we were able to provide our patient with a new heart,” said cardiac surgeon Mark Cunningham who performed the transplant surgery.

“The Keck Medicine of USC team displayed quick thinking, strong leadership, and a steadfast dedication to patient care, ensuring the best possible outcome from this incident.”

According to the United States Health Resources and Services Administration, a donated organ can survive up to four or six hours once extracted from a donor. They are matched with organ recipients by the United Network for Organ Sharing (UNOS) based on a number of criteria, such as the severity of the recipient’s need and travel time between both donor and patient.

Watch the dramatic moments when the heart was dropped after it was retrieved from the wreck.

Despite safety precautions around transporting organs, it remains a risky business. An investigative report found that a high number of donated organs were lost or delayed in their transportation after being shipped on commercial flights. Of course, the longer it takes to transport a live organ between donor and recipient, the likelier it is to become unviable.

The report found nearly 170 organs between 2014 and 2019 were unable to be transplanted, and nearly 370 endured “near misses” with delays of two hours or more due to transportation problems. It’s a troubling discovery given nearly 113,000 people are currently waiting for donor organs in the U.S.

As for the cause of the helicopter crash, investigators from the Federal Aviation Administration, the National Transportation Safety Board, and other government agencies are still trying to figure that out.

However, their findings are not likely be released due to the Health Insurance Portability and Accountability Act, otherwise known as HIPA, a federal law that protects sensitive patient health information from being published without the patient’s consent.

With so many patients awaiting life-saving organs every day, let’s hope we won’t see any more dramatic delays in the news.

Next, read about the man born without a testicle who received a transplant from his twin so he could have biological children. Then, go inside the story of how one patient’s arm transplants changed to match her natural skin tone.