Thanks to one bored 19th century hunter, Australia has a massive rabbit problem. 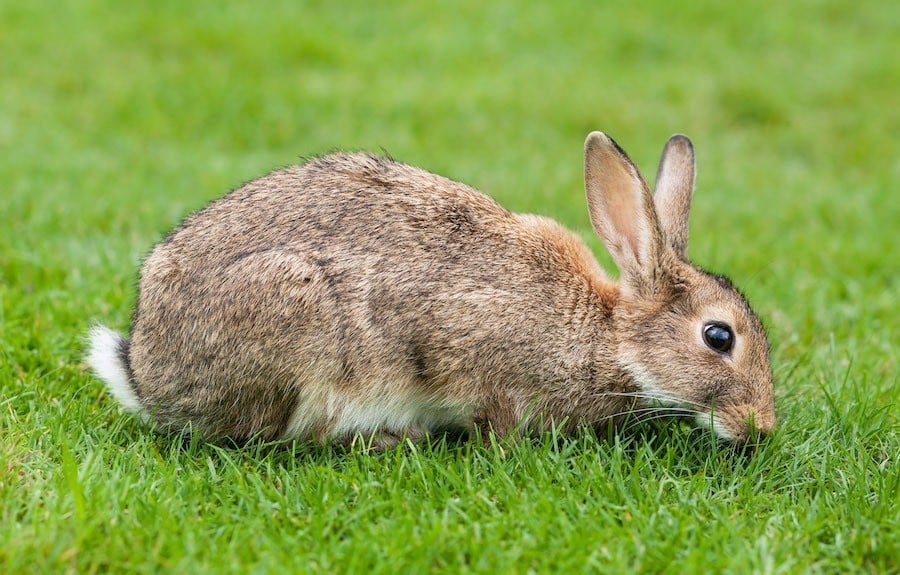 In Queensland, Australia, it’s illegal to own a pet rabbit unless you’re a magician. Why? Because for the past 150 years, rabbits have caused immense ecological damage to Australia.

Australia’s temperate conditions — general lack of seasons and little cold — and huge swaths of natural low vegetation make for an ideal rabbit home, so much so that the perennially-breeding creatures destroyed two million acres of floral lands in Victoria before they were even spotted in another state.

Currently, more than 200 million rabbits inhabit 2.5 million square miles of Australia. If that sounds like a lot, consider the fact that there used to be three times as many rabbits in the great down under.

Read on to learn how this invasive creature got to the island — and what Australian authorities are doing to curtail a massive ecological disaster.

A Brief History Of Rabbits In Australia 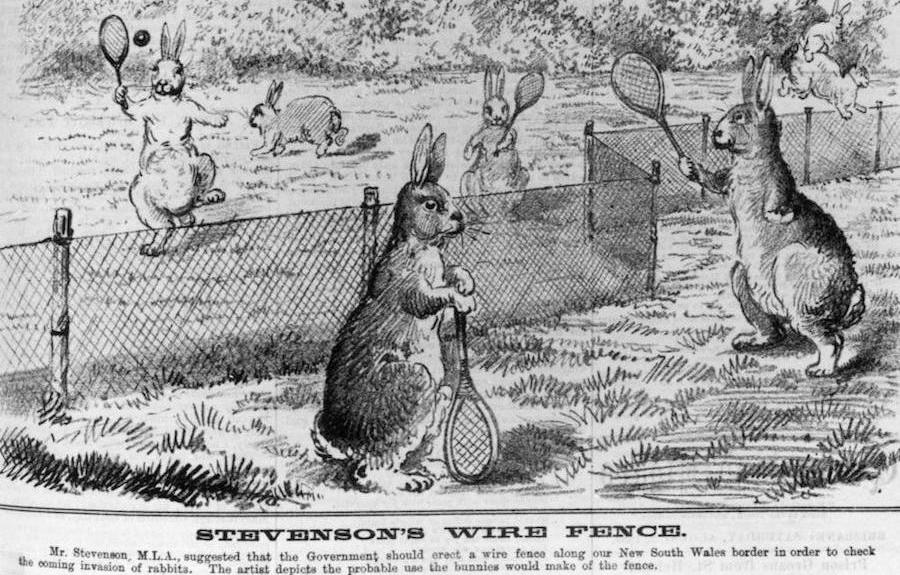 Wikimedia CommonsThe critical response to erect a rabbit-proof fence between New South Wales and Queensland, c. 1884:
“Mr Stevenson, M.L.A., suggested that the Government should erect a wire fence along our New South Wales border in order to check the coming invasion of rabbits. The artist depicts the probable use the bunnies would make of the fence.“

Rabbits have set up shop in Australia since the late 18th century, when the First Fleet — 11 ships carrying convicts that founded the first European settlement in Australia — brought them along for food in 1788.

In the 1840s, rabbit-keeping was a common practice among colonists, with bunny rabbit thefts showing up in court records. Rabbits became part of a colonist’s diet and farmers kept them trapped together with stone enclosures.

Unfortunately, they would soon spread across the country.

The story goes that a landowner by the name of Thomas Austin imported 24 European rabbits from England and released them into the wild for hunting purposes in October 1859.

Austin had been an avid hunter when he lived in England, and when he moved to Australia, he was disappointed that he didn’t have anything to kill for sport. So he asked his English nephew to send 12 gray rabbits, five hares, 72 partridges and some sparrows in hopes of creating a local population.

Austin’s nephew couldn’t find enough gray rabbits to fulfill his uncle’s request, so he sent a couple domestic rabbits to make up for it. Some biologists believe this is why the rabbit population exploded — a hybrid rabbit suited to Australian conditions formed when the two distinct types interbred.

And hunting he found. Within ten years of Austin releasing the rabbits into the wild, the population became so vast that Australians could kill two million — annually — without significantly affecting their numbers whatsoever.

Bunny Rabbits Are An Ecological Nightmare 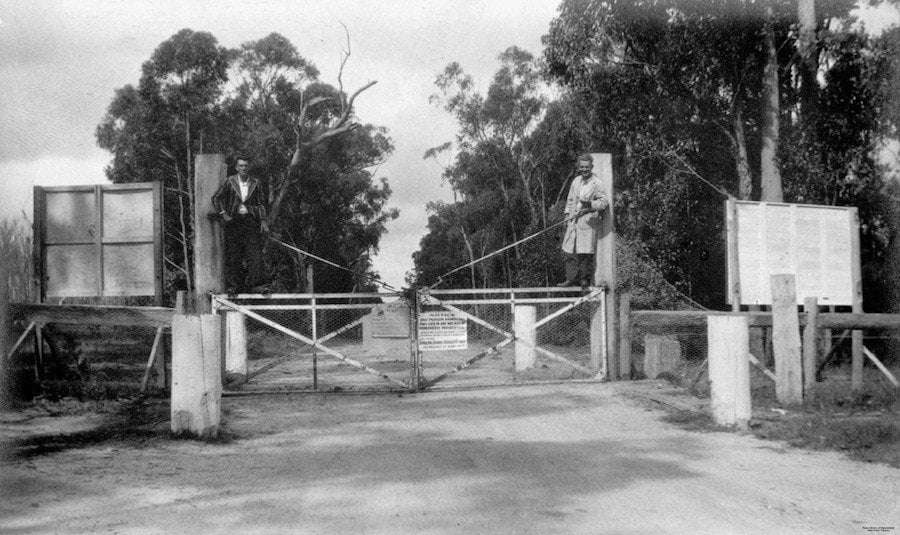 Wikimedia CommonsGate in the Rabbit Fence at Stanthorpe, Queensland, c. 1934.

The bunny rabbits’ growth was truly superlative: Indeed, experts say it is the fastest recorded spread of a mammal anywhere in the world.

And that growth came with significant ecological consequences. While large, Australia is not a great country for farming. And what little agriculturally fit land there is, rabbits plunder for survival.

Rabbits tend to excessively graze by act of habit — there’s just too many of them — and by diminishing the vegetable cover, wind can erode away the fertile top soil.

This matters because soil erosion affects rates of re-vegetation and water absorption. This has consequences. Take the Australian livestock industry, for example: As the amount of grazable land decreases, so does the population of sheep and cattle.

“Rabbits are very good at finding the seedlings of shrubs when they are very small and grazing them out to the extent where the native shrubs are completely unable to regenerate,” said Greg Mutze, a research officer at the Department of Water, Land and Biodiversity Conservation in South Australia, to the Australian Broadcasting Corporation.

Farmers thus extend the range their livestock will travel to eat, but that in turn adds to the problem by causing land to get overused. All in all, Australia’s rabbit infestation has cost its agricultural industry billions.

The damage extends beyond agriculture. Biologists have attributed the destruction of the eremophila plant and various Australian trees to the bunny rabbit, which feasts on their seedlings. Due to the sheer number of rabbits doing this, it becomes next to impossible for native flora to reproduce.

Native animals, such as the pig-footed bandicoot and the greater bilby, have seen their numbers decline dramatically as well. Why? They’re going after the same food sources as the rabbits, and just can’t compete with an all-consuming bunny rabbit horde.

Reducing The Amount Of Rabbits In Australia 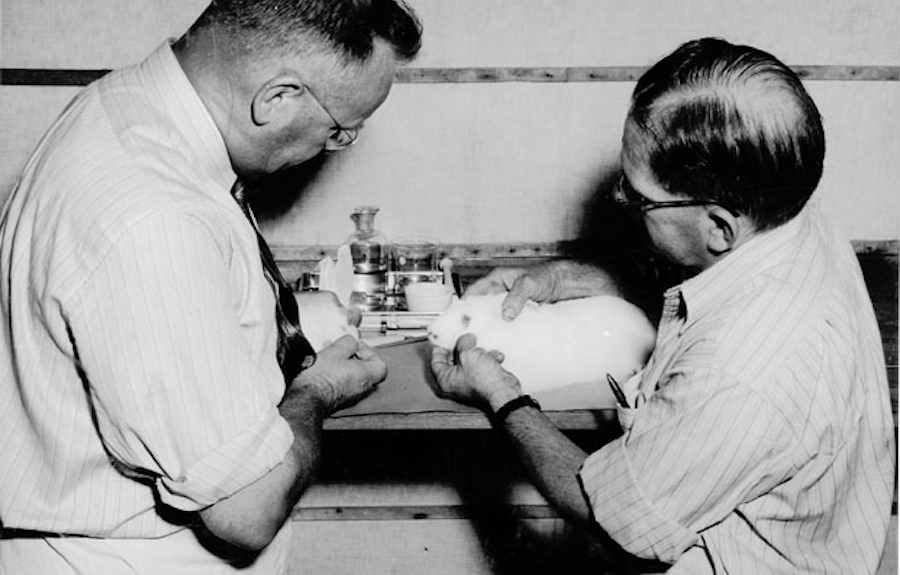 For the longest time, Australians trusted two means of managing the rabbit pest problem: trapping them, and shooting them. But by 1901, the Australian government had had enough.

They resolved to build three rabbit-proof fences in hopes of protecting Western Australia’s pastoral lands. It took them six years, but by 1907, more than 2,000 miles of fences crossed the continent.

The first fence, stretching 1,138 miles vertically down Australia’s entire western side, is still considered to be the world’s longest continuous standing fence. The second fence branches off the original for 724 miles to the southern coast, while the third fence stretches horizontally for 160 miles.

Despite Australia’s best efforts, the fence was unsuccessful. Too many rabbits managed to get to the protected areas before the Australians completed the fence and the ones that didn’t dig underneath it.

Myxomatosis affects only rabbits, causing them to develop skin tumors and blindness before succumbing to fatigue and fever. The disease is devastatingly effective, caused bunny rabbits to die within 14 days of contracting it.

Still, nature — even pests, nature’s unfortunate fruits — finds a way to survive. The remaining rabbits bred their numbers back up to 200 million and today, the disease only works on 40 percent of wild bunny rabbits.

However, pet bunny rabbits haven’t developed the same immunity. Since the Australian government doesn’t allow veterinarians to vaccinate pet rabbits against the disease, countless children have sobbed while their beloved pet perishes.

All in all, Australia’s rabbit population is a fraction of what it used to be. Yet it continues to burden the country’s farmland to the point of failure.

The bunny rabbits have been there for more than 150 years, and until someone does the impossible and creates the perfect biological weapon for rabbits, Australian farmers will have to continue relying on conventional means — including guns and steel-jaw traps — to get them off their land.

After learning about the plague of rabbits in Australia, check out these heartwarming photos of therapy animals, before learning about how Australia hopes to save its koala bears.