Callao Man was shorter than four feet and was just as comfortable climbing trees as it was walking on the ground. 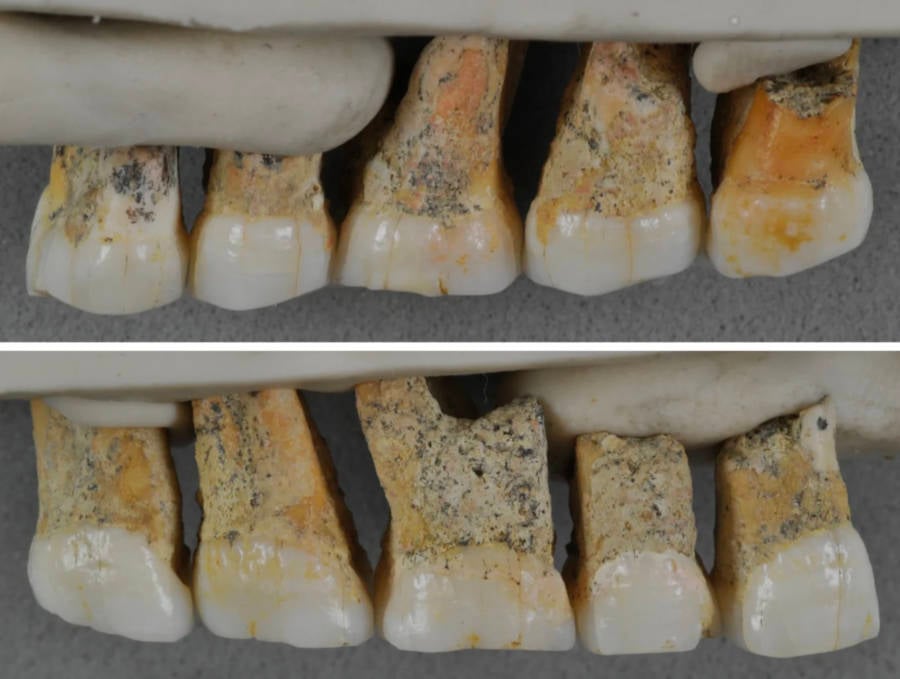 While the discovery of the small Homo floresiensis “hobbit” species on the Indonesian isle of Flores has been a remarkable find and forced evolutionary biologists to reassess what we know about our species, scientists just found fossilized evidence of an even smaller hominin.

According to History, the Philippine island of Luzon has kept these biological artifacts safe for more than 50,000 years.

It was under the rocky floor of the Callao Cave that researchers discovered these fossils of the so-called Callao Man, which not only indicate that these tiny humans inhabited Luzon during the Late Pleistocene — but that they walked the Earth in the same historical period that fairly advanced hominids like Neanderthals and Homo sapiens did.

While the geographical location of these fossils, which include the early humans’ tiny teeth, suggest they were largely similar to their Homo floresiensis counterparts, the shape of their teeth, feet, and various other characteristics distinguish them as a unique species of their own.

A short documentary on the Callao Man excavations from Nature.

The scientific community has been well aware that generations of ancient hominids used to inhabit this island. Archaeologists discovered a metatarsal foot bone here in 2007 — specifically, in the same cave where this latest evidence was uncovered.

The bone was dated to 67,000 years ago and while subsequent analysis confirmed it belonged to the Homo genus, no specific species was identified.

Excavations in 2011 and 2015 saw researchers led by Florent Détroit of the Musée de l’homie at the Natural History Museum in Paris and Armand Mijares of the University of the Philippines in Quezon City find 12 more bones and teeth in the same spot where the foot bone was discovered.

Their findings, published in the journal Nature, claimed the remains belonged to three individuals — one of which was quite young. The fossils shared distinct features with the Australophitecus, Homo erectus, Homo sapiens, and Homo floresiensis — a potpourri of early human genetics, essentially.

“What makes them a new species is actually the combination of all features taken together,” Détroit said. “If you take each feature one by one, you will of course find it in one or several hominin species. But if you take the whole package, no other species of the genus Homo is similar, thus indicating that they belong to a new species.”

The Teeth And Bones Of The Callao Man

The molars and premolars found at Callao Cave are distinctly different from the aforementioned species. First, the premolars have two to three roots — Homo sapiens have one, and in rare cases, two.

The enamel and dentin (the tissue comprising the body of the tooth) are similar to Australopithecus and several older species of the Homo genus, but the molars are small like those of contemporary humans.

“An individual with these characteristics combined cannot be classified in any of the species known today,” explained Détroit. 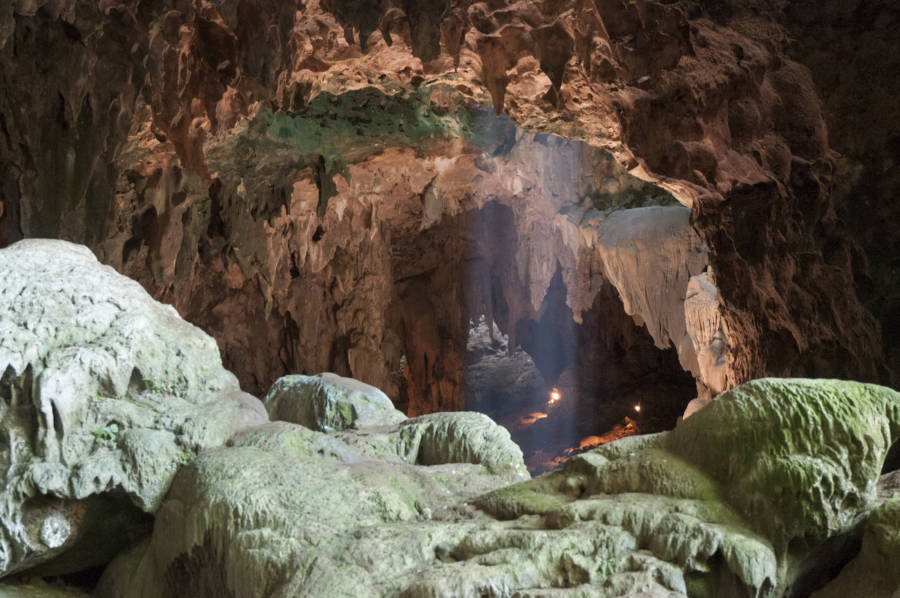 The foot bones, too, are remarkably distinct. They have both primitive and advanced features, which points toward a unique way of walking that would seem counter-productive for modern humans. The base of each toe is substantially curved, with signs of very developed muscle use to facilitate bending.

“These characteristics do not exist in Homo sapiens,” said Détroit.

While it’s yet uncertain, the Callao Man foot bones discovered in Callao Cave mainly resemble those of the Australopithecus — which lived in Africa two to three million years ago — suggesting that Homo luzonensis was just as comfortable climbing trees as they were walking on the ground.

The Callao Man (Homo luzonensis) species is now the second known dwarf human on record. According to LiveScience, while picturing the species as largely similar to their floresiensis counterparts isn’t entirely misguided, the 13 discovered fossil bones can give us a clearer picture.

The bones and teeth, which belonged to at least two adults and a child, include two hand bones, three foot bones, a thigh bone, and seven teeth. We can garner that they shared traits from a variety of other early humans, were good climbers, and shorter than four feet — but currently, little else. 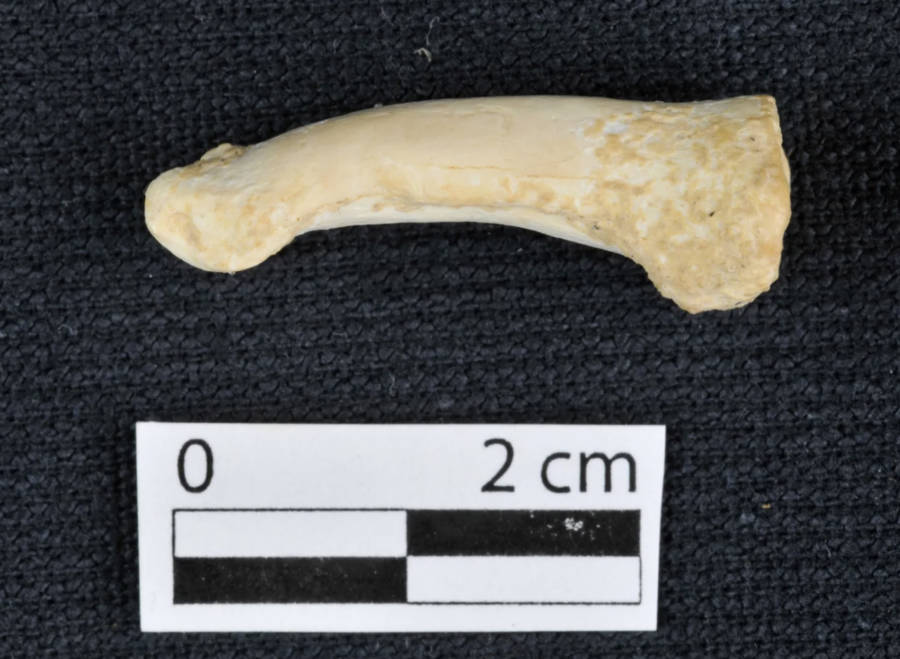 It’s difficult to concretely describe them physically “because it is very difficult to tell from the elements we have,” said Détroit. While their feet indicate strong climbing abilities, the Homo became bipedal 2 million years ago, so Détroit and his team “are certainly not pretending that H. Luzonensis was ‘back to the trees.’”

“But it is then a very interesting question to address,” he said. “If they were strict bipedal like all members of the genus Homo, did such primitive features influence (or) change their bipedal gait or not? But it is still too early to answer, we need to work on that.”

The Hominids Of Luzon Island

Researchers are fairly adamant that Homo luzonensis were the only hominids that inhabited this island during their stay — even though it’s well established that other Homo species lived on Southeast Asian islands within this timeframe.

Luzon is a sizable chunk of land and well isolated from the mainland. This has made much of its flora and fauna unique to the island. As a result, those who manage to survive, thrive, and evolve here would inherently differ genetically from related species on the continent. 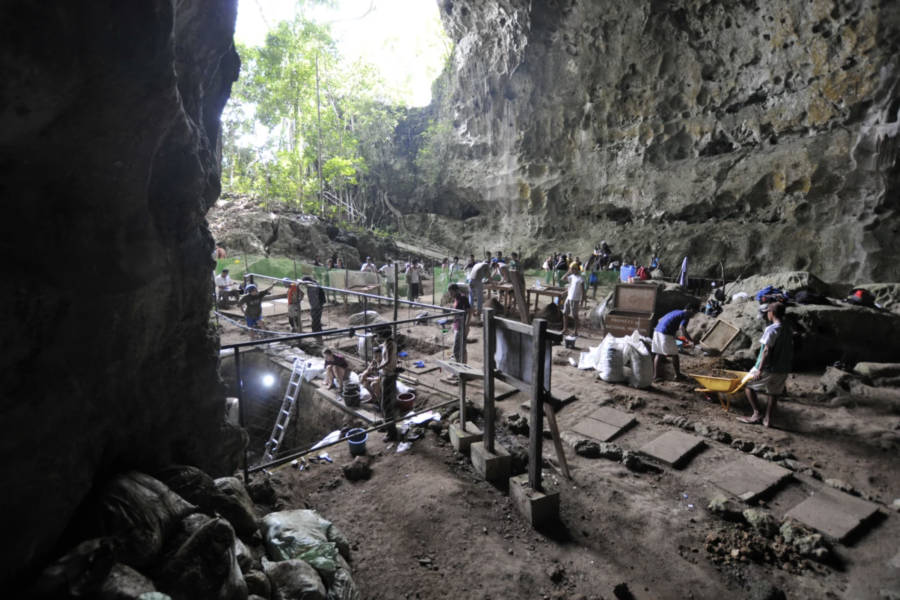 This, specifically, is why researchers believe Homo luzonensis differed so wildly from its contemporary counterparts. The earliest Homo sapiens fossils in the Philippines were found in Tabon Cave on Palawan island and date back 30,000 to 40,000 years ago.

Homo luzonensis, however, was alive and well on Luzon as far back as 700,000 years ago. This is evidenced by recent archaeological discoveries that unearthed stone tools and bones from a slaughtered rhinoceros near the Callao Cave.

So how did they get here?

How Homo Luzonensis Arrived At Luzon

Clearly, neither the isle of Flores nor Luzon are anywhere near Africa — the cradle of civilization. Because researchers are unable to extract DNA from the newly-found bones, due to the humid climate rapidly eradicating genetic material over time, lots of questions regarding the species’ arrival here remain.

The preliminary blueprint, in broad terms, is that the Homo erectus left Africa and various parallel species and descendants continued our evolution. According to CNN, in the case of Homo floresiensis, they lived between 100,000 and 60,000 years ago, and have so far exclusively been localized to Flores.

Just as researchers believe Homo floresiensis were short in stature due to the Petri dish effect of evolving on an island, as well as a scarcity of resources, so too do they believe the Homo luzonensis evolved as well. But how did this species migrate from mainland to isolated island — and what does that entail?

Researchers are strongly considering the possibility that seafaring was involved. Though this could’ve been unintentional — an accidental drifting on rafts, and washing ashore on Luzon by chance — that notion is a fairly stunning one to behold.

“We have more and more evidence that they successfully settled on several islands in the remote past in Southeast Asia, so it was probably not so accidental,” said Détroit.

“Another important thing to have in mind is that you cannot successfully settle on an island with a single event of arrival of only few people, you need several individuals of course, and you need several arrivals, at least in the beginning, so that you have enough founders settled on the island.”

“Our picture of hominin evolution in Asia during the Pleistocene just got even messier, more complicated and a whole lot more interesting,” said Matthew Tocheri.

Indeed, the discovery of the Callao Man (Homo luzonensis) species has been yet another scientific find that has thrown the field of evolutionary biology for a loop. The complex variety of features from all sorts of early human species indicates human evolution was more aberrant and had a wider range than previously thought.

“Fifteen years ago, human evolution in Asia was very simple, with Homo Erectus going out of Africa, settling in East and Southeast Asia and nothing happening until the arrival of Homo sapiens at around 40-50,000 years ago,” said Détroit. 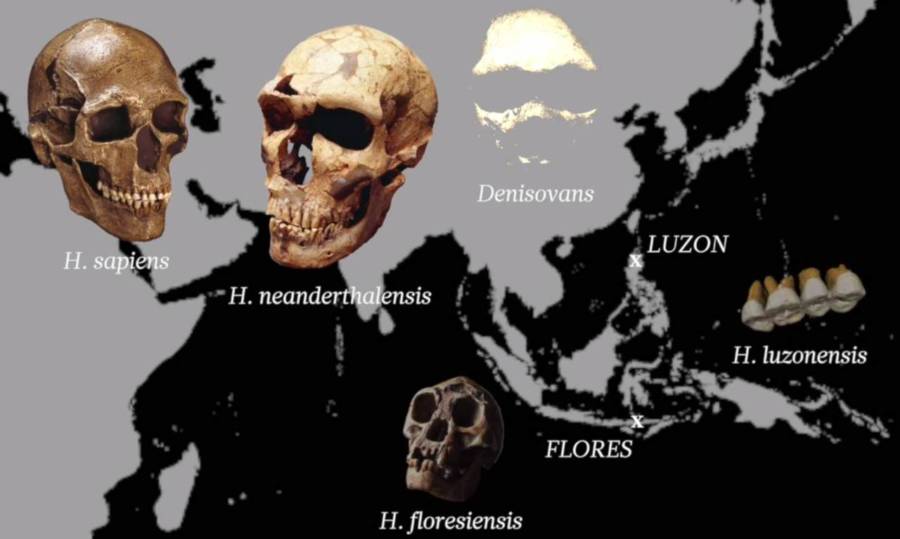 NatureA map depicting the general areas in which early hominins were discovered.

“This finding is a significant new piece of evidence to improve our knowledge of human evolution, especially in Asia, where human evolution was clearly much more complex (and much more interesting) than what we thought before.”

Ultimately, Détroit and his team of fastidious researchers are grateful to dig deeper. The results are a potentially better understanding of our species and its past, a more effectively informed sense of history, and perhaps even future discoveries that will serve as gigantic leaps for all of the above.

“As we can see now, Southeast Asia, and especially their islands, is a fantastic place for studying hominin evolution, and conducting fieldwork to find more sites with ancient archaeology and hominin fossils,” said Détroit.

After learning about the Callao Man and the newly-discovered Homo luzonensis species of early hobbit-like humans, read up on other early human ancestors like Australopithecus sediba and Homo naledi.