Casimir Pulaski has been hailed the "Father of the American Cavalry," but a discovery by anthropologists has revealed that he may be the one in 2,000 who identifies as intersex. 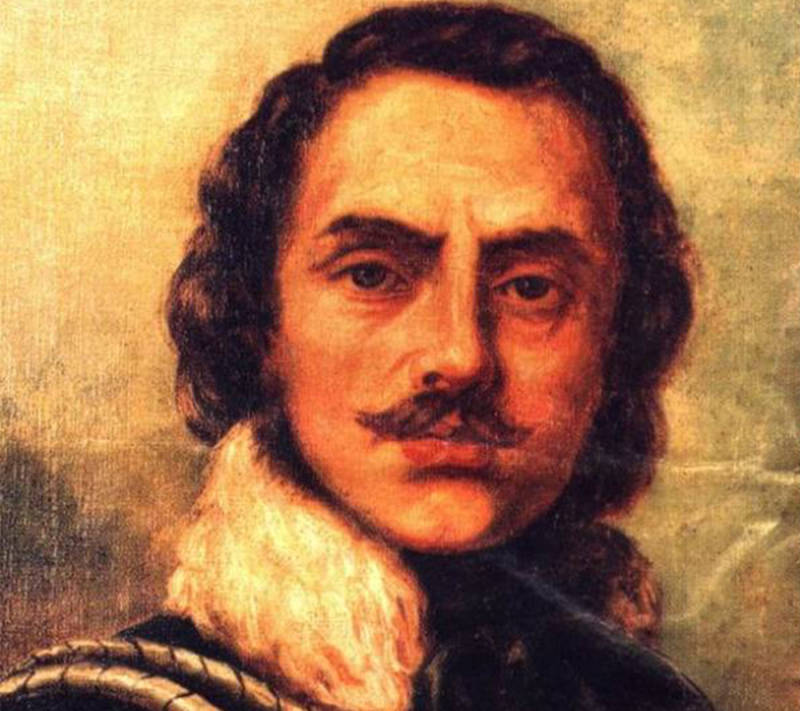 Wikimedia CommonsCasimir Pulaski is known as the “Father of the American Cavalry,” but new research suggests that this title might need be more ambiguous.

In the short span of his U.S. military service, Casimir Pulaski held a significant role in the American Revolutionary War. The Polish-American nobleman-turned-military leader is known as the “Father of the American Cavalry” for earning his stripes and the trust of America’s first president George Washington after saving his life during the 1777 Battle of Brandywine.

But startling new evidence suggests that the Father of the American Cavalry may have actually been intersex.

Casimir Pulaski Was A Born Rebel 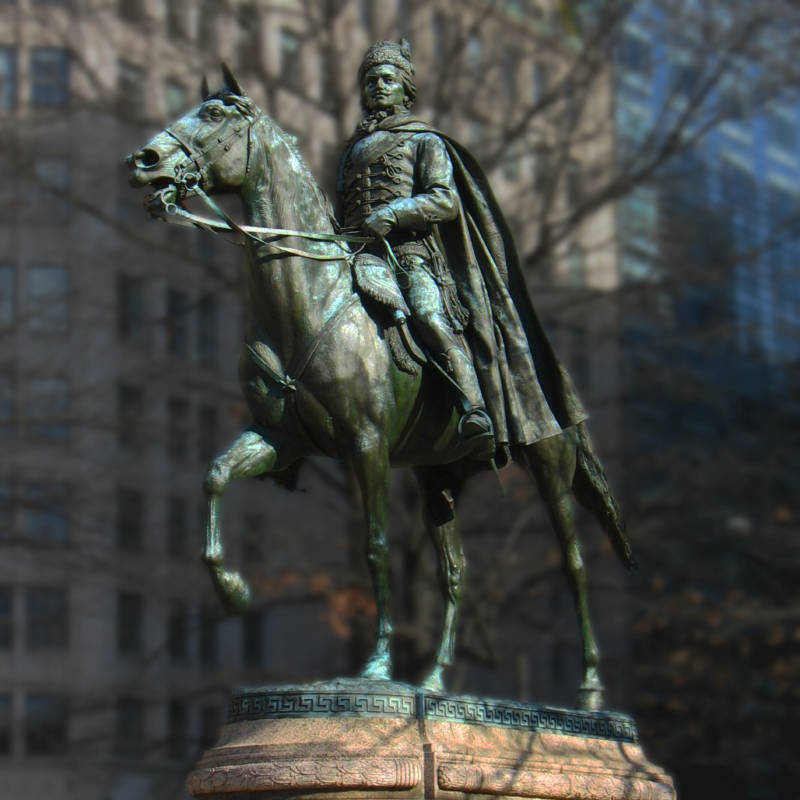 Pulaski was born into a family of privilege. The second eldest of three sons, he was born in Warsaw, Poland, in 1745. Pulaski’s father, Józef Pułaski, was an advocatus, or lawyer, and a member of the Polish legislature. He was, therefore, one of the most notable members of Poland’s high society.

In fact, Pulaski’s family was of such importance that they bore the Ślepowron coat of arms, a family crest adorned by several prominent clans during the Polish-Lithuanian Commonwealth.

Because of his privileged upbringing, Pulaski received a tremendous amount of skilled training. He spent his childhood years being trained in archery, lancing, and, perhaps most importantly, horseback riding. Poland has a rich tradition of horseback riding and young Pulaski excelled in his lessons which would later prove to be essential to his future in the American military.

Casimir Pulaski’s involvement in the country’s rocky politics began at age 15 when he joined his father’s cause as one of the founding members of the Polish Confederation of Bar which was a league of Polish nobles committed to protecting the country’s sovereignty against Russian interference.

By age 20, Pulaski proved to be a talented military leader despite his petite stature of somewhere between five-foot-one and five-foot-four-inches tall. He successfully led the rebellion’s armed forces against the new Polish King Stanisław II August Poniatowski who was considered to be a puppet ruler from Russia.

But in 1772, the uprising against Russian forces had begun to fail. After the Confederation was unable to dethrone King Stanisław and the last of its contingent had fallen in Częstochowa, Pulaski became a wanted man and he eventually fled to France to avoid capture.

Pulaski’s New Cause In America 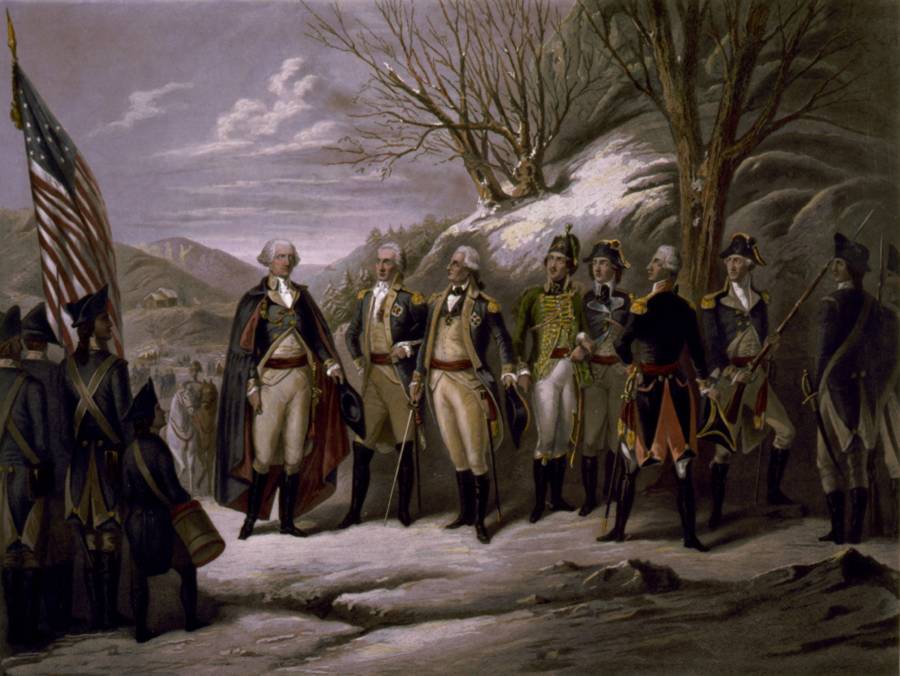 When Casimir Pulaski arrived in France he met none other than Benjamin Franklin. The statesman had been scouring Europe for skilled men who could support America’s fight for independence against the British. Pulaski was young and charismatic, and he boasted the characteristics of an effective military leader. Franklin was quick to personally recommend him to General George Washington.

In a letter to Washington, Franklin described Pulaski as “an officer renowned throughout Europe for the courage and bravery he displayed in defense of his country’s freedom.”

Pulaski eventually set off for Philadelphia where Washington was stationed. But his arrival in America was met with skepticism as Pulaski was not the only European recruit to aid the American rebellion. Indeed, hundreds of soldiers from abroad had come to fight on behalf of the British colony.

Pulaski managed to distinguish himself from the other immigrants during the Battle of Brandywine south of Philadelphia. When Washington’s soldiers found themselves cornered by British troops, Pulaski allegedly managed to cut off the Brits and help Washington’s troops to evade defeat. 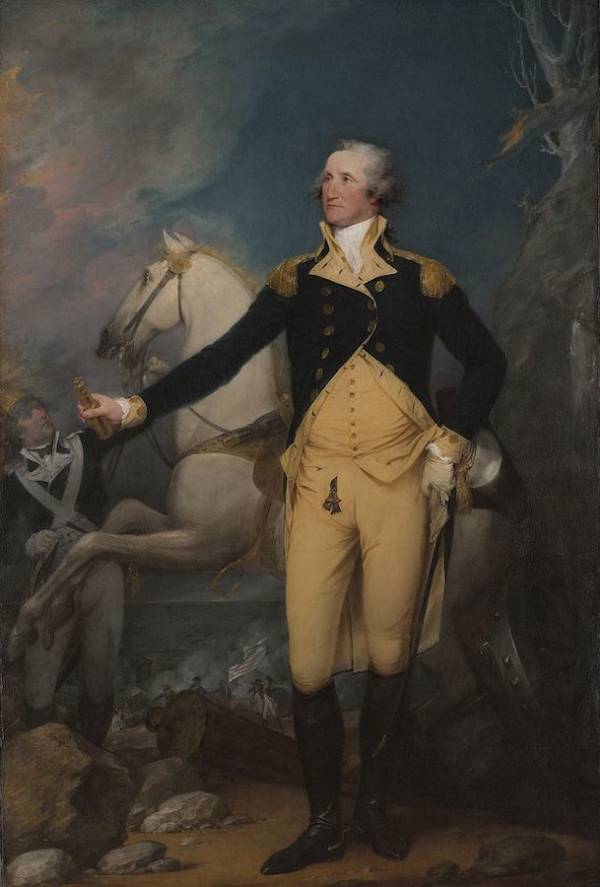 If it hadn’t been for Pulaski’s stellar show of military tactics here, Washington and his men would have been captured by the Red Coats. Therefore, many historians credit Pulaski for saving Washington’s life during that battle.

Washington quickly promoted Pulaski as head of the U.S. cavalry. In the 1779 Siege of Savannah, Georgia, Pulaski famously led a combined Franco-American cavalry force. He was, however, severely wounded during the attack. Pulaski died as a result of his injury on Oct. 11, 1779, a mere two days later. 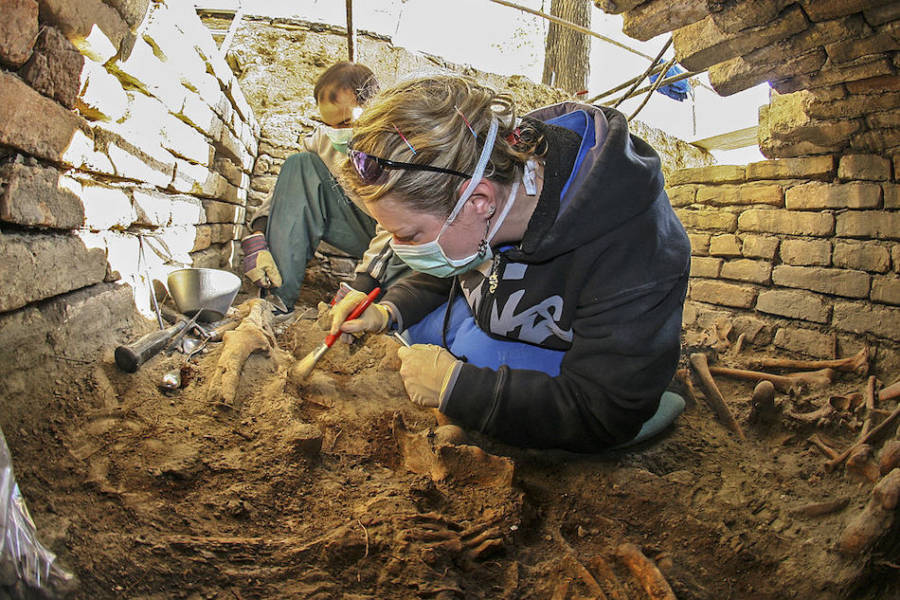 For his significant contributions in the fight for American independence, the Polish-American general has had monuments erected, towns renamed, roads paved, and public holidays officiated in his honor. Pulaski is often referred to as a shining example of the dedication and service many immigrants brought and continue to bring to America. He is often considered the pride of the Polish-American community in the U.S.

However, startling evidence discovered by anthropologists suggests that the highly-skilled cavalry general may have actually been female or even intersex.

“One of the ways that male and female skeletons are different is the pelvis,” Virginia Hutton Estabrook, an assistant professor of anthropology at Georgia Southern University, told NBC News. “In females, the pelvic cavity has a more oval shape. It’s less heart-shaped than in the male pelvis. Pulaski’s looked very female.”

Intersex, as Pulaski is suspected to perhaps have been, is an individual who carries both biological characteristics of males and females. It could mean that the individual has both male and female chromosomes or ambiguous genitalia. Sometimes the variations in the individual’s sex anatomy can be so subtle that they are hardly noticeable, and appear either later in life, or not at all.

A Smithsonian Channel documentary titled, The General Was Female? aired this past month which explored Pulaski’s unique anatomy.

That the great general may have been intersex has long been suspected. Since his skeletal remains were first exhumed in the 1990s, surprised researchers found that the general’s skeleton was unmistakably female. In addition to the shape of the pelvic bones, the body showed other female characteristics including a delicate facial structure and rounded jaw line.

Unfortunately, the technology that was available at the time was not advanced enough to support the investigation. Funding for the study had also dried up and so the investigation came to a halt.

“To our great frustration, we were unable to solve the mystery,” Chuck Powell, a historian who was on the original investigation team, told the Associated Press. He added that “We ought to stop here and declare it a female and walk away.”

But years later, the investigation was reopened by none other than Powell’s daughter, Lisa Powell. With more advanced technology, Lisa Powell’s team was able to confirm that the female remains were, in fact, Pulaski’s by matching its DNA with those of Pulaski’s great-niece. The body also showed signs of injury and signs that it had experienced frequent horseriding, which were both consistent with Pulaski’s lifestyle.

Researchers in the new investigation then, believe that Pulaski was either a biological woman who dressed as a man, or that he carried both male and female biological traits, yet was brought up as a man. 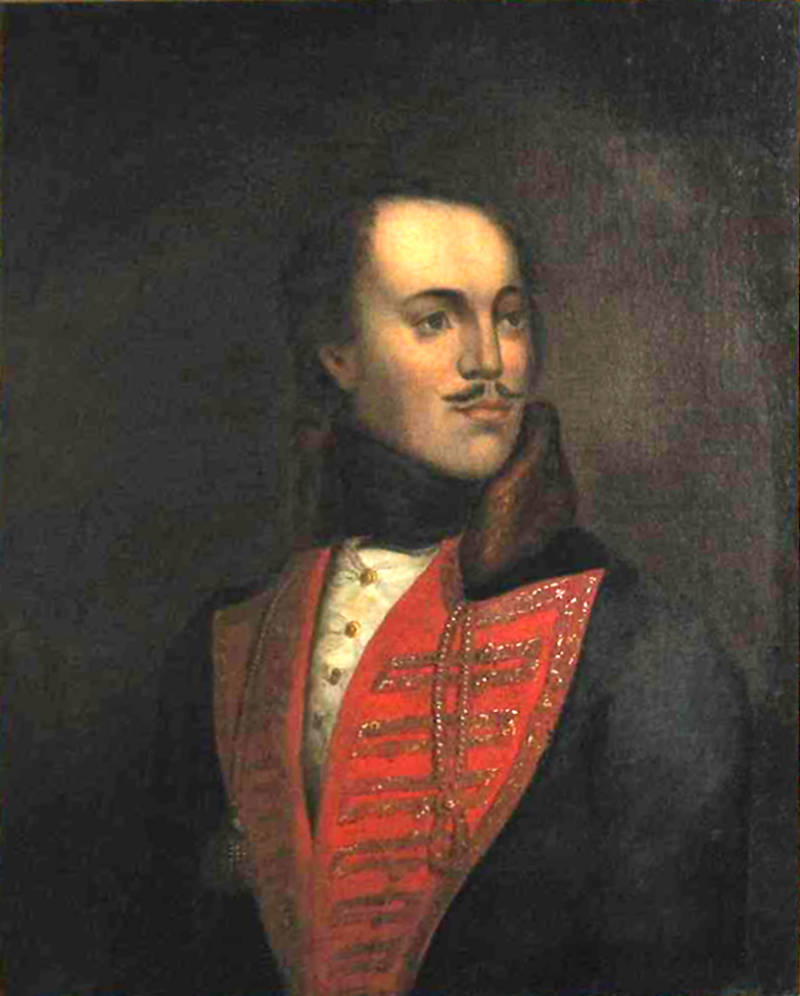 We can never be exactly sure what Casimir Pulaski knew about his own body’s uniqueness. In fact, the war hero could have not understood that he was different at all as he did live and identify as a biological man.

“Probably he was not completely aware,” Estabrook said. “What we do know about Pulaski is that there were enough androgens [male hormones] happening in the body so that he had facial hair and male pattern baldness. Obviously, there was some genital development because we have his baptismal records and he was baptized as a son.”

Intersex babies account for only two percent of all babies born which makes them almost as rare as red heads.

Kimberly Zieselman, the executive director of interACT which is an advocacy organization for intersex children, lauded the discovery. The intersex community currently fights against their invisibility within society, either because of lack of information or recorded history or even because of surgeries to reverse the individual’s anatomy. 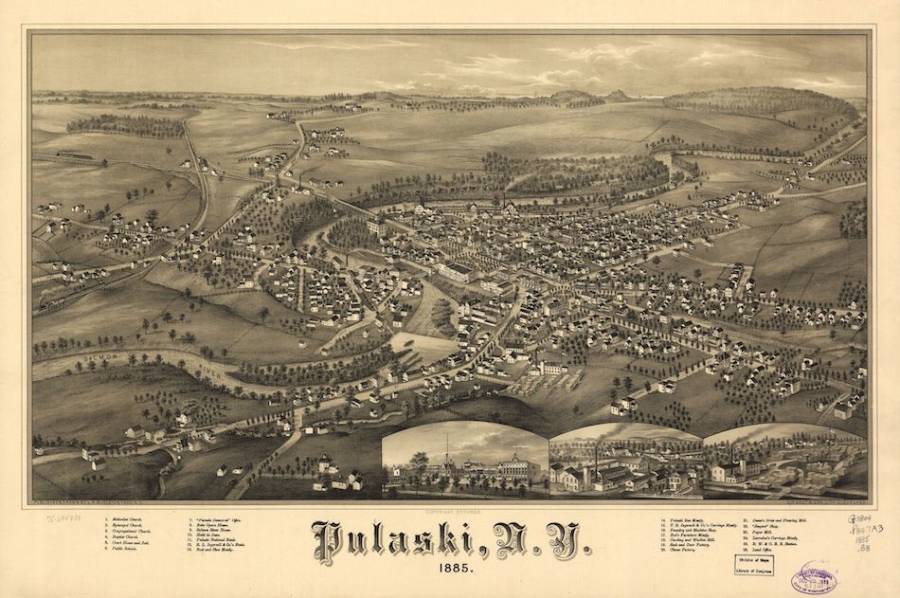 Wikimedia CommonsMap of Pulaski, New York, which was named after the American war hero.

The Intersex Society of North America estimates about one in 2,000 people are born with ambiguous genitalia which can lead doctors to perform what advocates say are harmful surgeries.

“Just imagine if Casimir Pulaski were born today,” Zieselman told the New York Times. She raised the argument that if Pulaski were forcibly raised as a girl by traditional standards of today’s society, he would not have joined the military and, therefore, would not have helped Washington in battle.

The discovery of a prominent American hero who was born intersex carries a lot of significance for individuals who identify as intersex or non-binary. Regardless of what Pulaski’s true biological traits were, this remarkable finding does not erase the fact that Pulaski was an incredibly important figure in American history. There is no doubt that the proud Polish-American will continue to be celebrated for decades to come.

After this look at Casimir Pulaski’s unique intersexuality, read these facts you never knew about Benjamin Franklin. Then, take a look at haunting photos from the American Civil War.