After a 12-hour battle involving over 400 firefighters and other brave volunteers, the Notre Dame fire was extinguished and many relics have been saved. 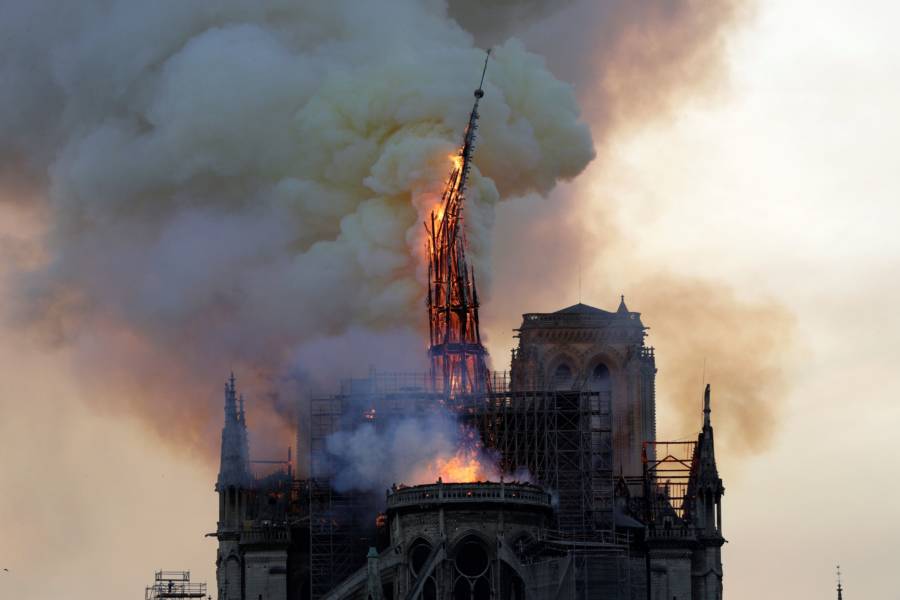 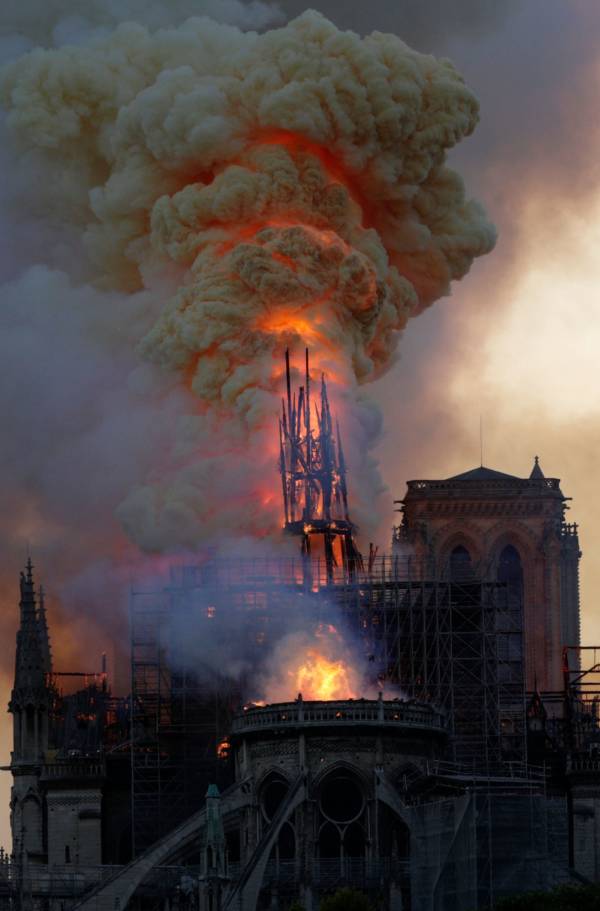 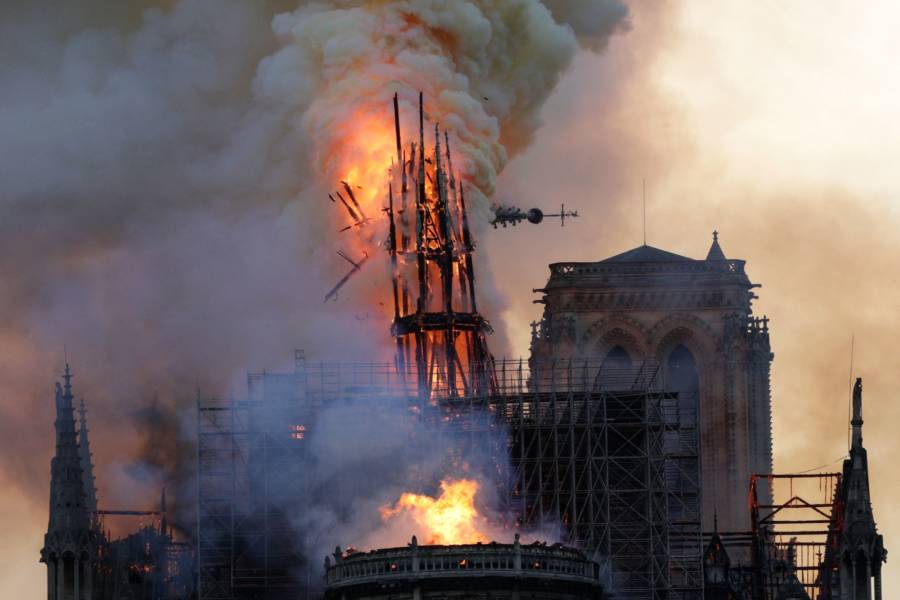 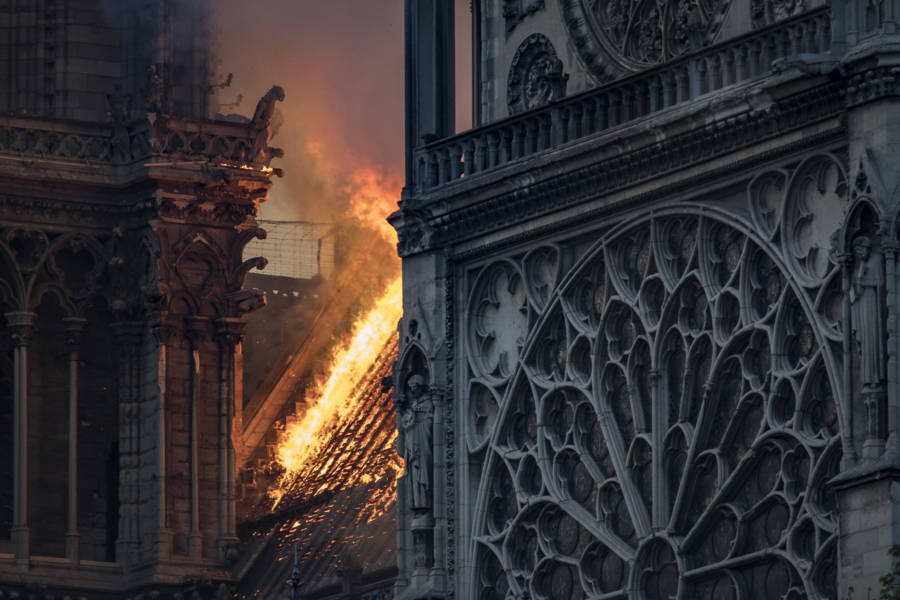 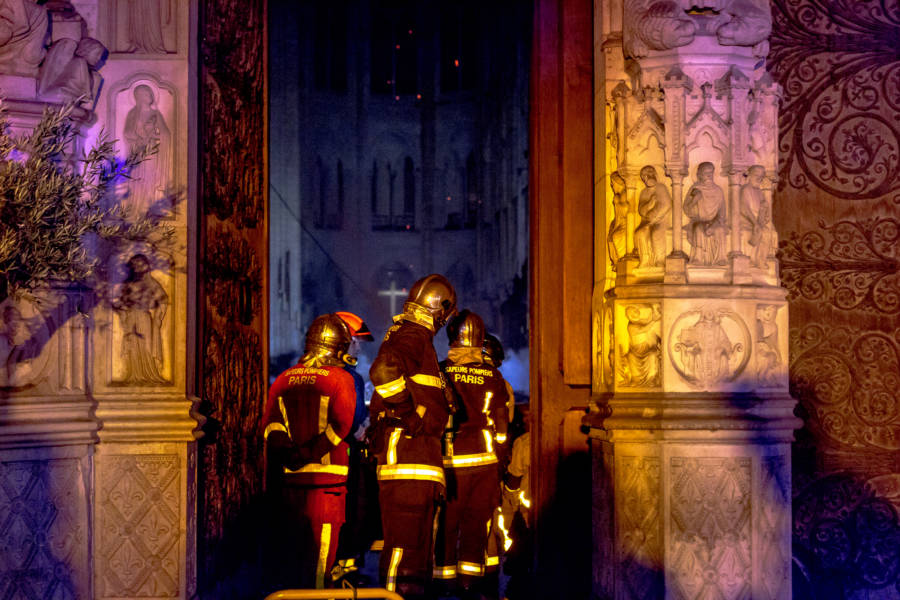 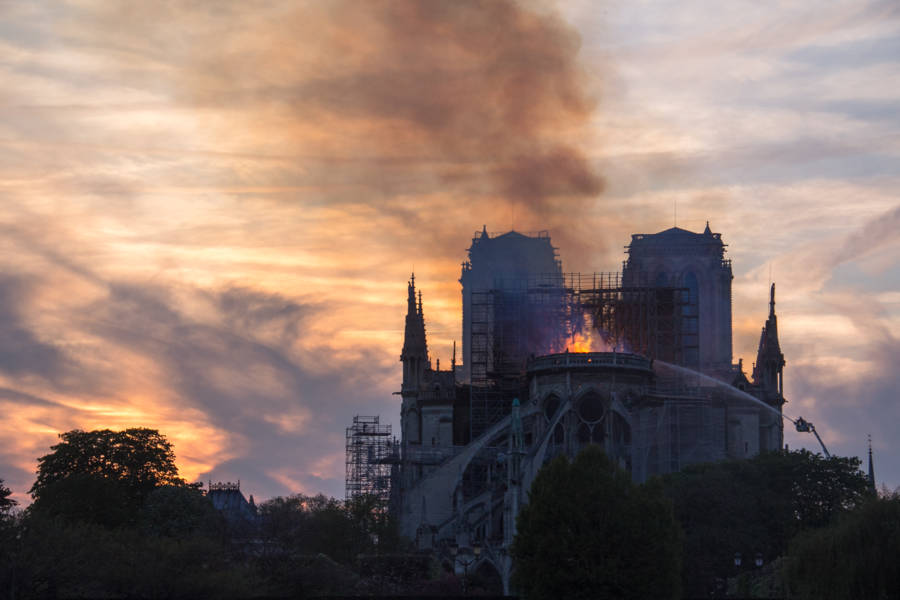 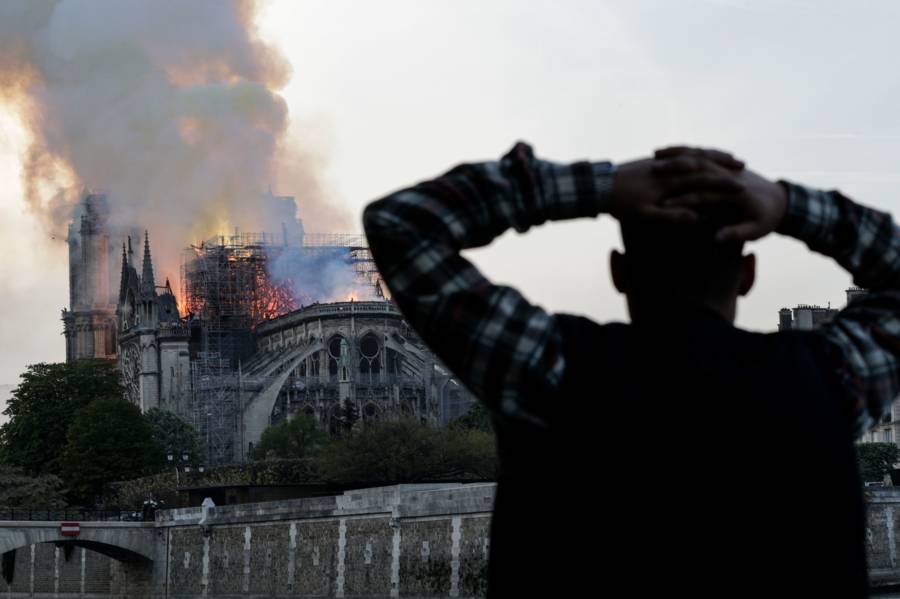 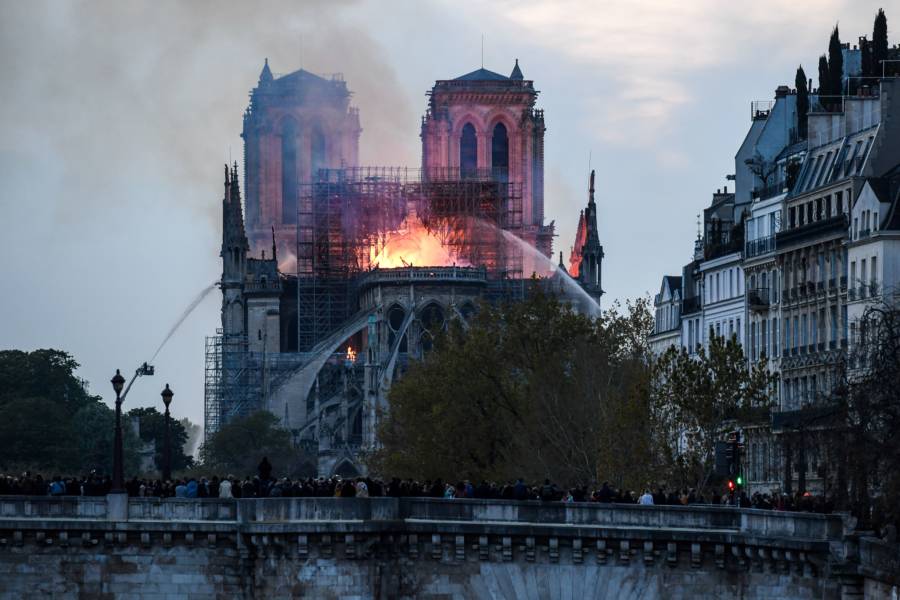 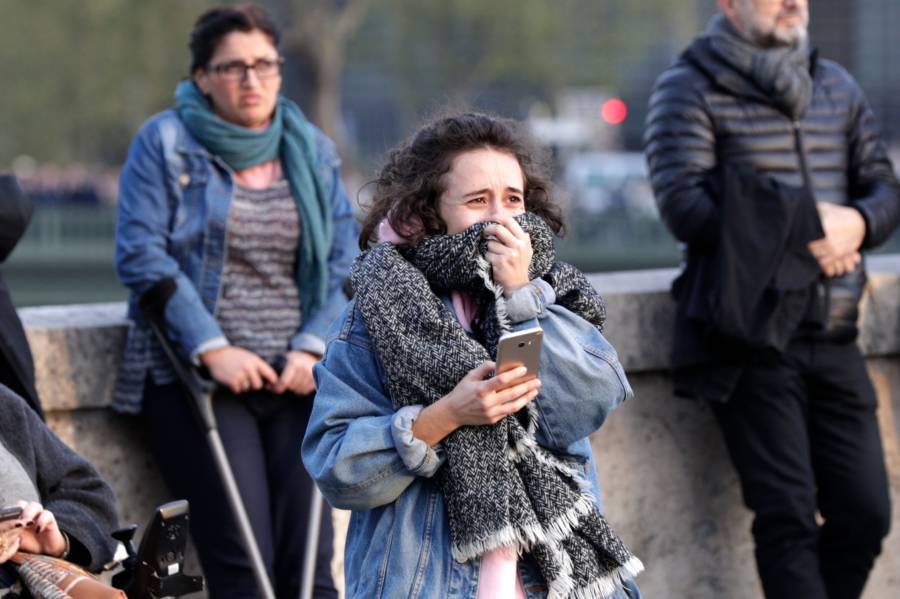 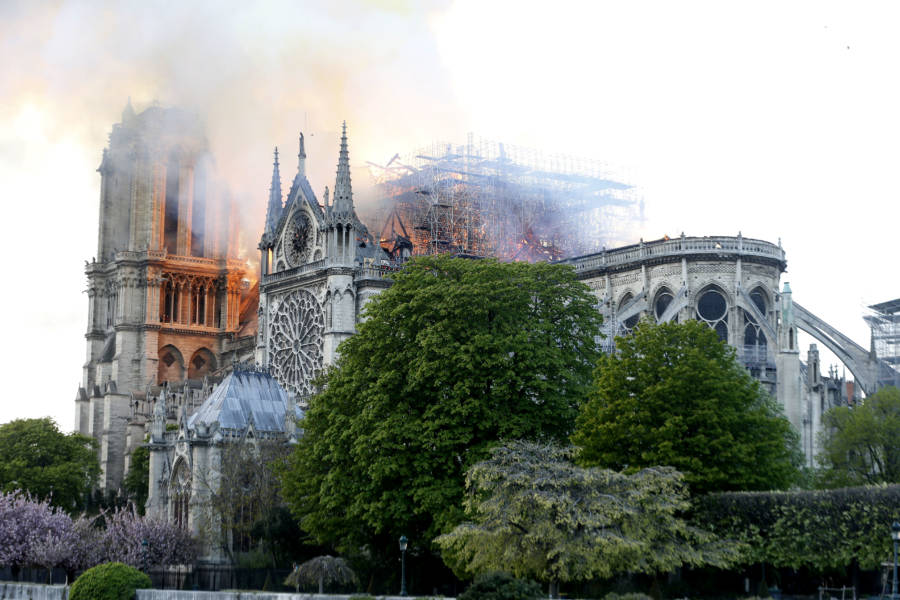 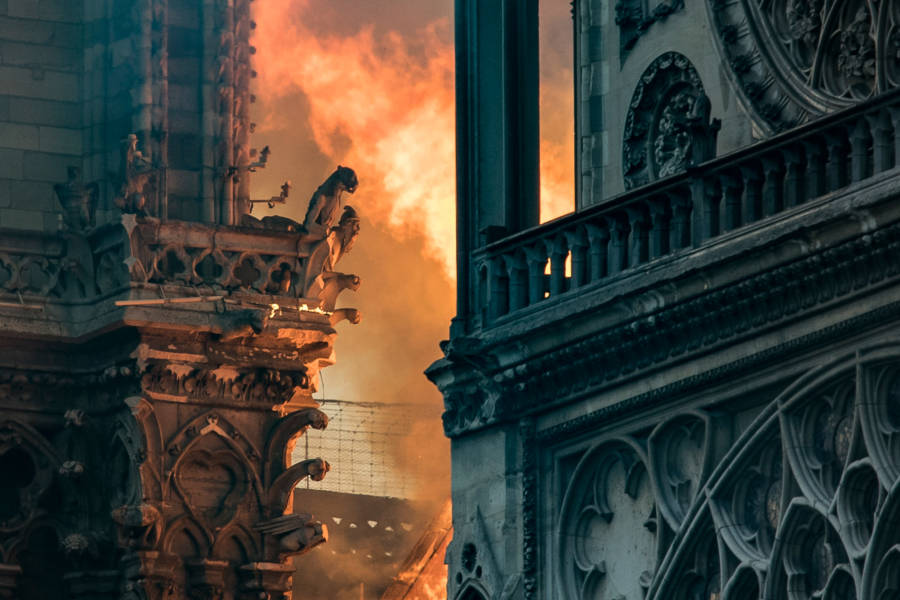 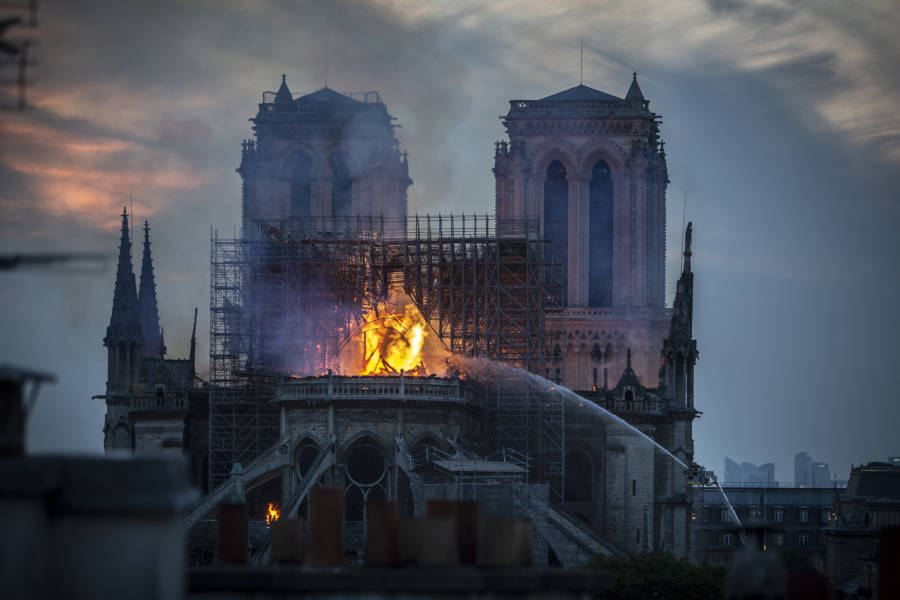 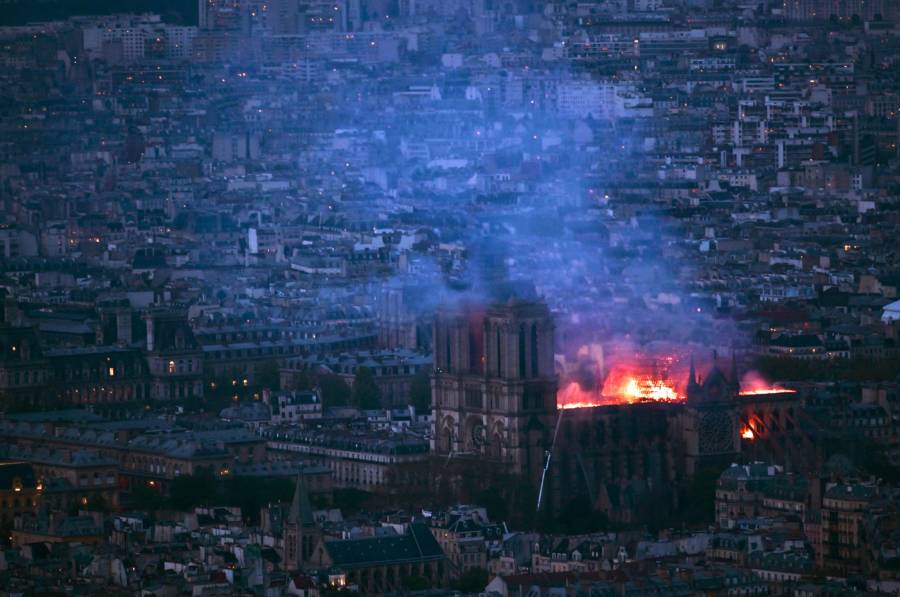 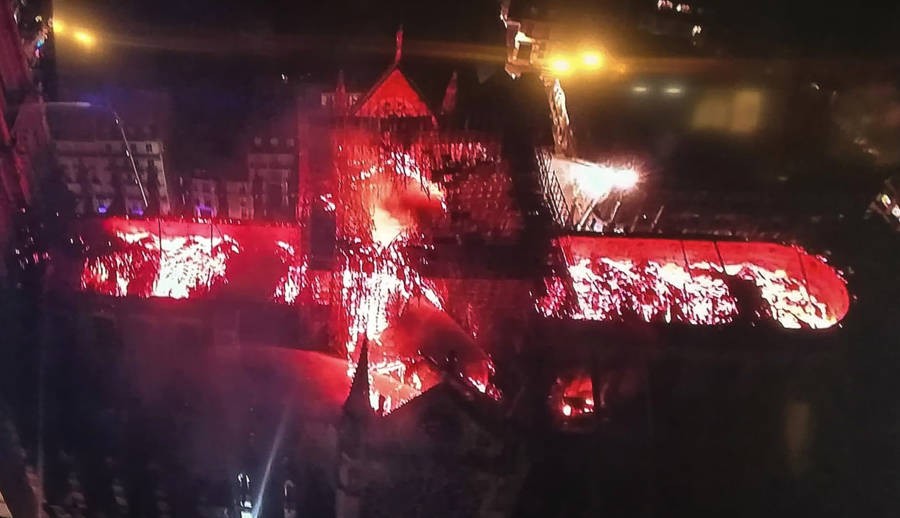 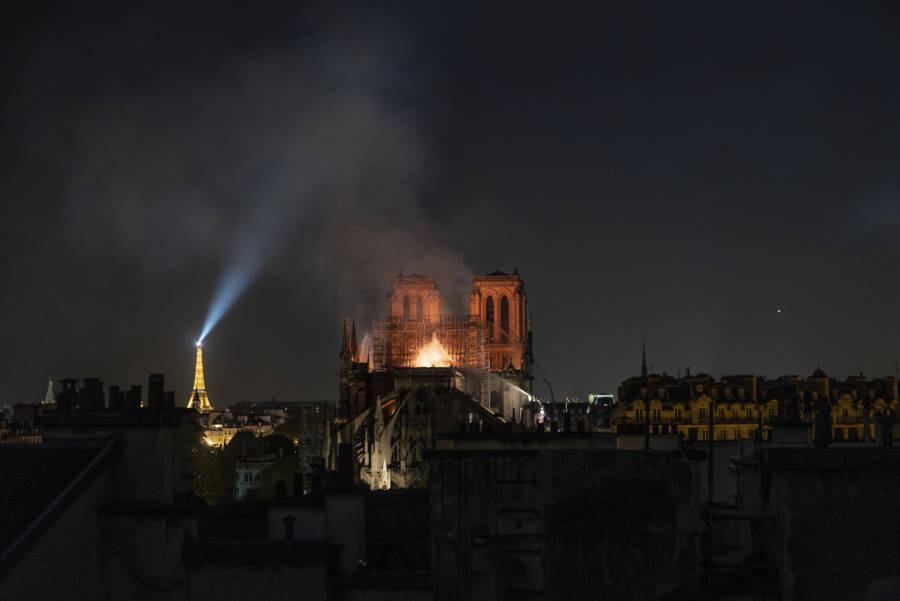 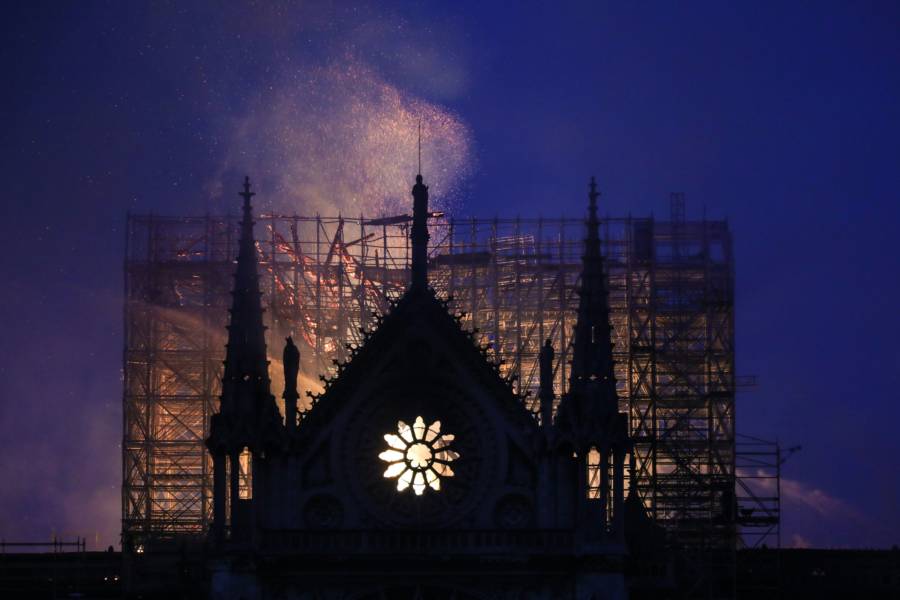 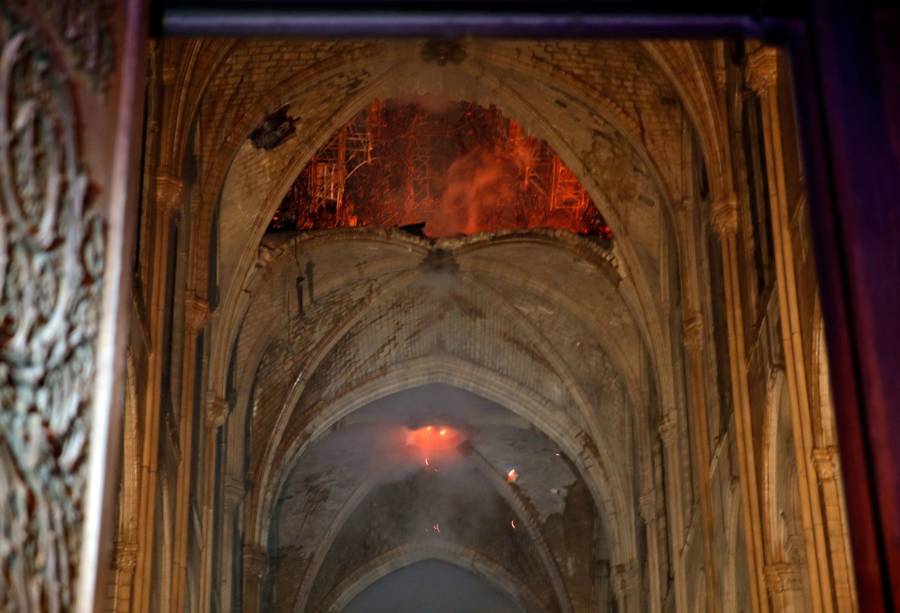 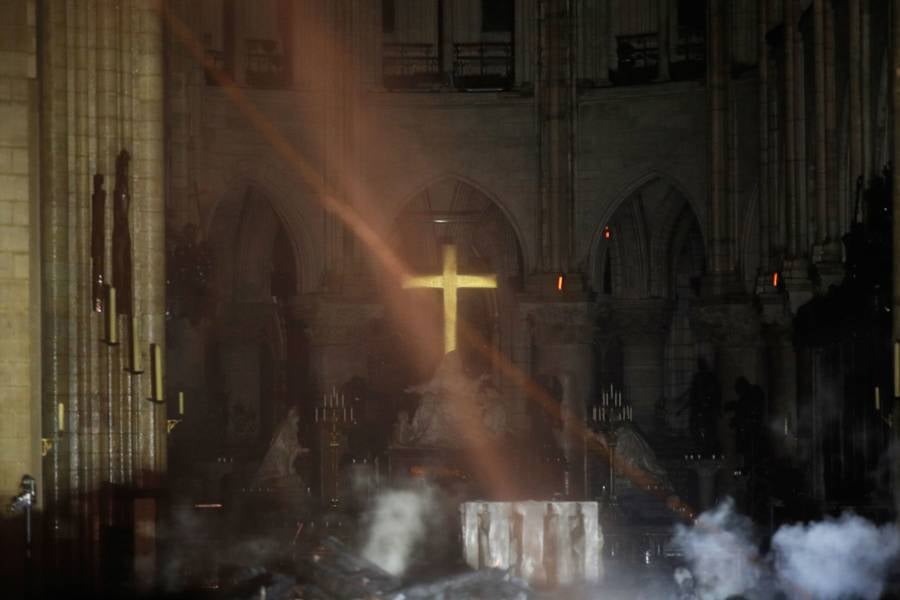 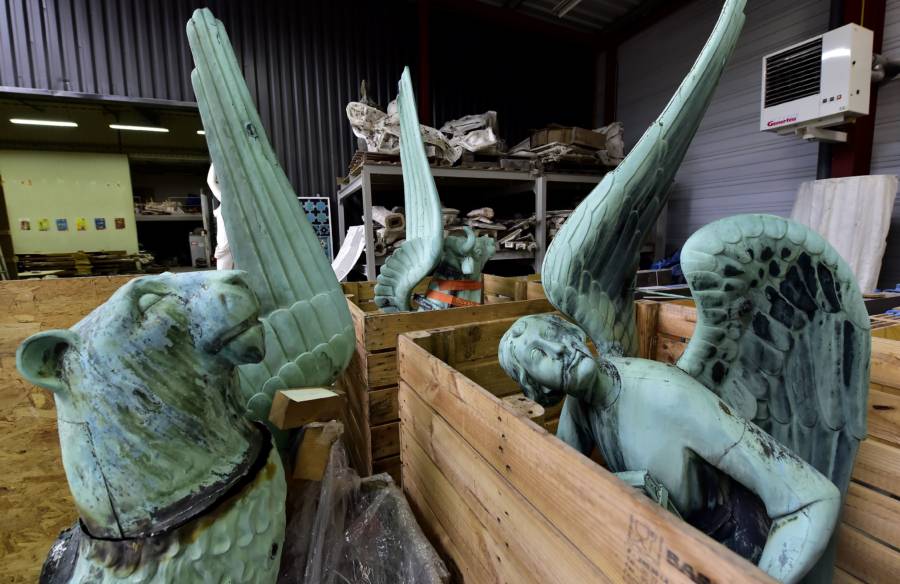 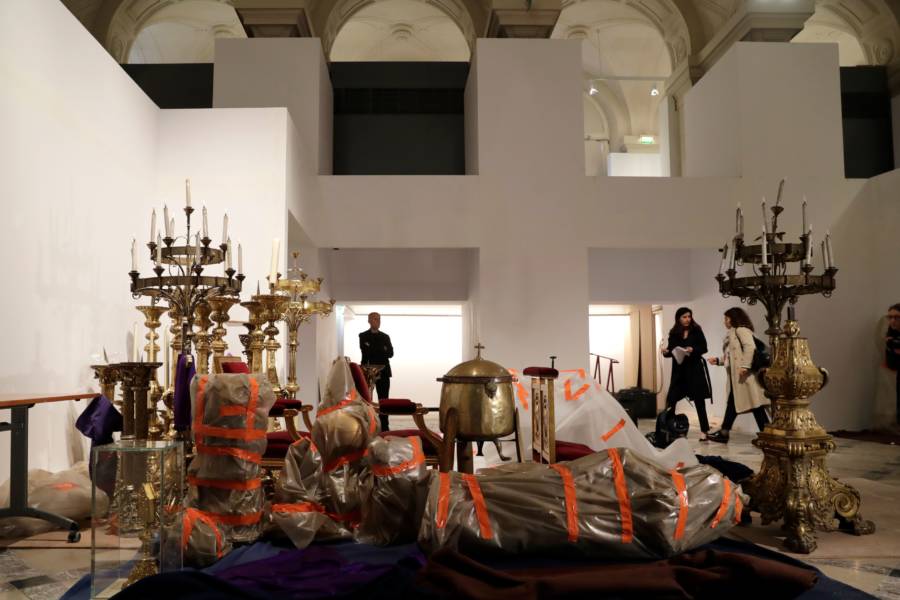 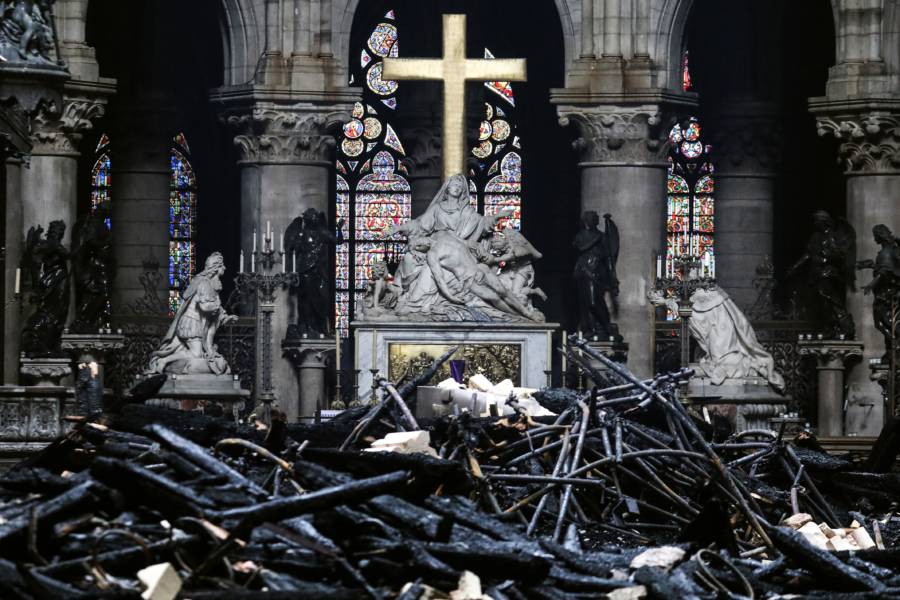 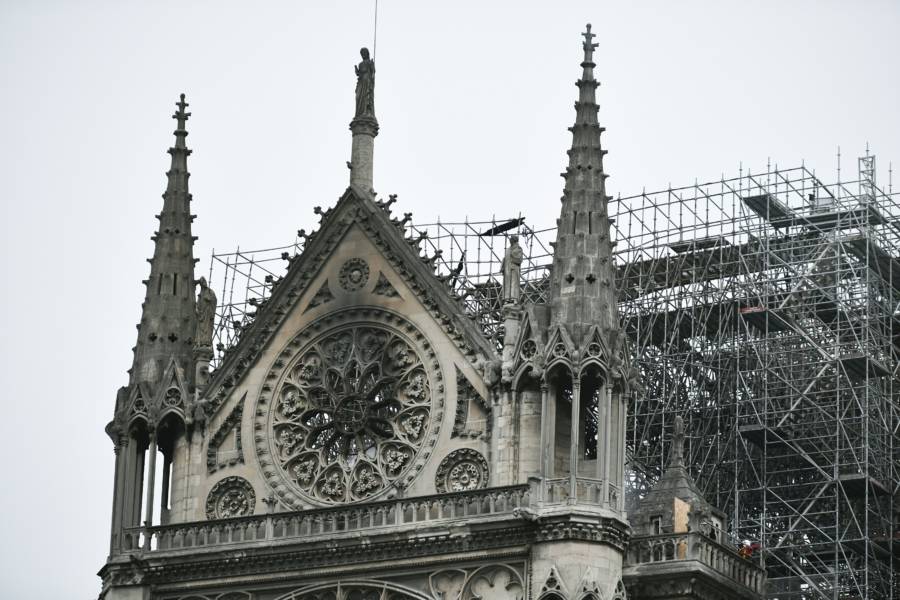 These heartbreaking pictures of the Notre Dame fire say it all. Monday was a day of tremendous loss for the city of Paris, lovers of architecture, and Catholics the world over. The famed cathedral, home to exquisite artifacts, paintings, and other priceless works of art, burned as winds stoked the flames and firefighters struggled to save it.

The cause of the fiery blaze at the Notre Dame cathedral which took down the 850-year-old relic's roof on April 15, 2019, remains unknown. However, officials largely believe it to have been accidental — and related to current restoration efforts.

Reuters constructed a timeline regarding how quickly the fire spread.

The fire starts in the roof of Notre Dame cathedral, according to firefighters.

A Reuters journalist sees smoke and flames at Notre Dame from a distance.

The fire spreads to the giant spire of Notre Dame cathedral.

French President Emmanuel Macron cancels planned TV address to the nation because of the blaze.

French president’s office says Macron is rushing to the scene.

The entire roof of Notre Dame collapses, according to a Reuters correspondent at the scene.

Paris’ Ile de la Cité, the island on which Notre Dame sits, is evacuated by police.

Though the spire collapsed — along with much of the roof — inside Notre Dame cathedral things look hopeful. The altar is buried in debris, but votives lit in prayer pre-blaze remain aglow. The gold cross shines as a beacon of hope onto the still-standing pews.

Firefighters, along with Paris's Deputy Mayor Jean-Francois Martins and others saved many invaluable relics from perishing in the Notre Dame fire.

"We made a human chain, with our friends from the church... to get, as quick as possible, to get all the relics," Martins said, noting that the Crown of Thorns believed to have been worn by Jesus Christ on the cross was among the items rescued.

Other relics workers saved are a fragment of the Wood of the Cross — believed by many to be a part of the cross on which Jesus was crucified. This, along with one of the nails that the Romans used to crucify him. The Tunic of Saint Louis, worn by French King Louis IX in the 13th century, also made it out.

Items rescued from the burning cathedral are temporarily being stored in the Louvre and the Paris Hotel de Ville.

"Notre Dame was destroyed but the soul of France was not," Michel Aupetit, archbishop of Paris, told RMC radio.

"In the Middle Ages, you would’ve believed that God sent the fire because God wanted a better cathedral. But you can’t hope for a better cathedral at this point", says Stephen Murray, an art historian and professor at Columbia University. "The question is, how on earth are we going to find the resources to rebuild this one?"

President Macron stated that he's looking to have Notre Dame rebuilt in five years as donations toward the restoration pour in. The total reconstruction funds raised so far have topped 800 million euros ($904 million) as of this writing.

Thus these pictures of the Notre Dame fire should not dishearten you too much. The restoration will be difficult, but Macron is committed to doing his best.

"Notre Dame of Paris is our history,” Macron says. "The epicenter of our lives. It’s the many books, the paintings, those that belong to all French men and French women."

Rebuilding Notre Dame will not be an easy undertaking. Bertrand de Feydeau, vice president of the preservation group Fondation du Patrimoine, says that the roof's wooden beams cannot be remade because "we don't, at the moment, have trees on our territory of the size that were cut in the 13th century."

The History Of Notre Dame Cathedral

The construction of Notre Dame — perhaps the world’s finest example of French Gothic architecture — lasted nearly 200 years; between 1163 and 1345. Perfecting all those flying buttresses, ribbed vaults, high bell towers, and rose glass windows took quite a bit of time.

Aside from its beauty, the Parisian icon is the location of some of France's important historical moments. Henry VI of England was crowned inside the cathedral in the year 1431. France also crowned Napoleon Bonaparte as emperor of France inside Notre Dame in 1804.

Things weren't always as rosy as the cathedral's stained glass windows, however. Notre Dame stood steadfast as the French Revolution, World War I, and World War II went on around her. She stood through pollution and decay, budgeting constraints, and protests. Hitler even had the church slated for demolition by fire. As the history is told, Nazi General Dietrich von Choltitz is responsible for disobeying that order and saving the historic cathedral.

But for some, the Notre Dame Cathedral will always be best remembered as the setting of Victor Hugo's novel, The Hunchback of Notre Dame. Beyond the story of Quasimodo and Esmeralda, the cathedral emerges as more than just a place; it is a character in and of itself. The popularity of the novel sparked a decades-long renovation beginning in 1841.

Now, many unite in prayer that the magnificent architecture of the Notre Dame cathedral can be rebuilt for future generations.

After this look at some Notre Dame fire pictures, find out more on the history of Paris by touring the world's largest crypt — the Catacombs. Then, look through these mesmerizing and historic photos of Paris during the 1940s