The Bizarre Story Of Casu Marzu, The Illegal Maggot Cheese That’s A Beloved Delicacy In Italy

Literally translating to "rotting cheese," casu marzu is a traditional Sardinian pecorino made with sheep's milk — and filled with live maggots.

Imagine you’re going on a fabulous trip to Italy. Part of the plan is to take advantage of the famously delicious cuisine. The savory tomato sauces, Margherita pizzas, gelato, wine… and the list goes on. But if you’re feeling a little more adventurous, you might be curious about trying casu marzu.

To some old-school Italians — especially those who live on the island of Sardinia — this traditional cheese is the ultimate treat on a summer day. But out-of-towners may just call it by a simpler name: maggot cheese. Yes, it contains maggots. Live ones, in fact. This is important to note. If your casu marzu contains dead maggots, it usually means the cheese has gone bad.

But how did casu marzu — famously dubbed the world’s “most dangerous cheese” — become one of Italy’s most coveted delicacies?

The Creation Of Casu Marzu 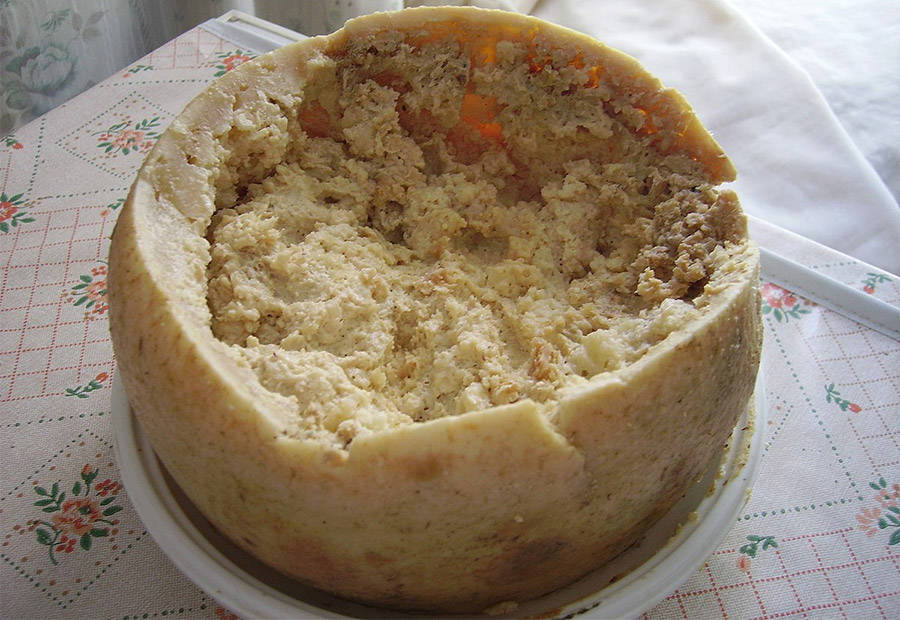 According to CNN, casu marzu dates back to the Roman Empire. The product originated on the Italian island of Sardinia. Though the cheese is an important part of Sardinian culture, its production is dwindling, and not many people craft it in the modern-day world of the squeamish.

Casu marzu takes some time to make — at least a few months — but the process itself is easy. When it’s finished, a casu marzu cheese should contain maggot numbers in the thousands. Intrigued? Read on.

The cheese is made from sheep’s milk. Step one is to heat the milk and then let it sit for three weeks to curdle. By then, it should have a nice crust on it. The next step is to cut that crust off. This makes it inviting for the special “cheese skipper” flies to enter and lay their eggs inside.

Afterward, it’s left in a dark hut for two or three months. During that time, the fly eggs hatch into their larvae (known as maggots) and promptly begin to move through the cheese and eat the proteins in the food.

The excretions that pass through the maggots’ bodies are essential, as they are what gives the cheese its distinctly soft, creamy texture and rich flavor.

Presto! At this stage, you have casu marzu. Those brave enough to eat this cheese have described its flavor as “spicy,” “pungent,” “peppery,” “sharp,” and “intense,” and some say that it reminds them of ripe gorgonzola. But it should be noted that what they’re actually tasting is larvae excrement.

How To Eat “Maggot Cheese” 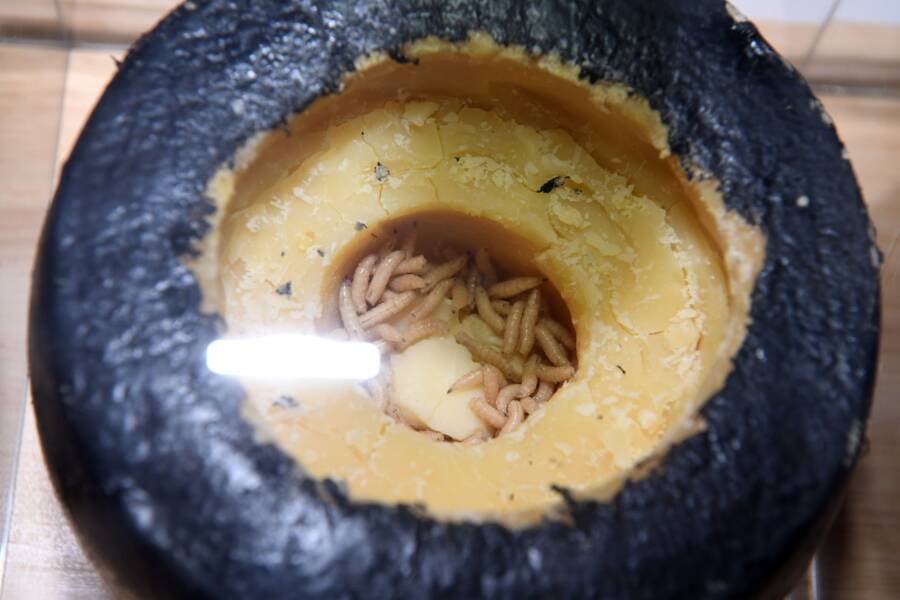 Once the casu marzu product is completed, there are a few tips on the correct way to eat it. As previously mentioned, casu marzu is to be consumed when the maggots are still alive. When you take a bite, it’s said that you should do so with your eyes closed, according to Mental Floss.

That’s actually not to avoid looking at the maggots as you eat them, but to protect your eyes. When bothered, the maggots will jump up as high as six inches. Because of this, many consumers will also put one hand below their nose while eating to prevent the maggots from getting into their nostrils.

Next tip, it is imperative for one to properly chew and kill the maggots before swallowing. Otherwise, they could technically continue to live in your body, wreaking havoc within. But many Italians beg to differ with this claim, saying, “We’d be full of maggots because we’ve eaten them for a lifetime.”

Some Sardinians have also pointed out that important historical figures like Pliny the Elder and Aristotle were known to have eaten worms — so consuming maggot cheese shouldn’t be unthinkable in the modern world.

As far as flavor accompaniment, people enjoy casu marzu with a moistened flatbread, or prosciutto and melon. It also pairs well with a glass of strong red wine. The liquid courage may also be helpful for first-timers.

Why Casu Marzu Is Such An Elusive Delicacy 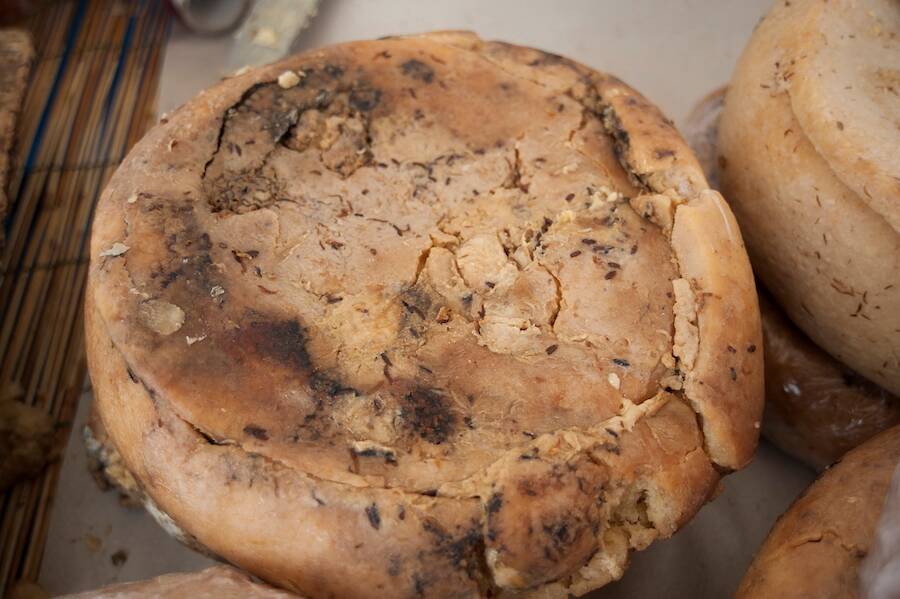 Enrico Spanu/REDA&CO/Universal Images Group via Getty ImagesThanks to its illegality — and the health risks it poses — casu marzu is difficult to find outside of Sardinia.

Now, if this bizarre food sounds absolutely amazing to you, and you’ve decided that you must give it a try, there’s some bad news.

First, it is extremely difficult to get your hands on it, since the EU has banned the cheese, according to Food & Wine magazine.

Though it’s technically protected locally on Sardinia as a traditional product of the island, it’s not exactly advertised out in the open. After all, Italians caught selling it could be fined up to $60,000. Therefore, those wishing to eat casu marzu must go through the Italian black market — or become friends with a generous local who’s willing to give it away for free.

Secondly, it’s somewhat of a lost art form. If you’re making casu marzu, the technique has probably been perfected over generations of your family. Since it’s illegal to sell, it’s mainly kept for friends and family to enjoy.

Sure, casu marzu may come with some caveats. Illegal, yes. Dangerous? Maybe. Off-putting? Certainly, to most. But it’s highly sought after for a reason. Sardinians claim the cheese is an aphrodisiac, often enjoying it at weddings and other celebrations during the summer.

Of course, many adventurous foodies from around the world are also intrigued by the notoriety of the product. Back in 2009, it was declared the world’s “most dangerous cheese” by the Guinness World Records.

This is not only due to the risk of maggots potentially surviving in the body but also the problems that they could hypothetically cause if they lived there: bloody diarrhea, vomiting, abdominal pain, allergic reactions, and possibly even myiasis — or micro-perforations in the intestine.

Could Maggot Cheese Be The Sustainable Food Of The Future?

Making casu marzu is an ancient tradition, and could potentially make a comeback as the future of food looks toward sustainability.

Yes, there’s its “banned” status, but the chance of health repercussions from eating raw maggots is fairly slim, as long as the maggots don’t originate from feces or garbage. Indeed, many fans of casu marzu have insisted that they’ve never had a health problem after eating the cheese. But of course, there is some level of risk, hence the restrictions. On top of that, some people — especially in America — simply feel wary about eating bugs.

However, many Americans eat bugs quite often without even realizing it, thanks in large part to the many small “food pests” that regularly sneak into our food. According to Scientific American, most people on average consume up to two pounds of flies, maggots, and other bugs each year.

This level is deemed safe by the FDA since their own rules declare the maximum amounts allowed in food. Given that statistic, perhaps as a society, we should attempt to get over our aversions to eating insects, maggots included. After all, we’re already ingesting them.

“An overpopulated world is going to struggle to find enough protein unless people are willing to open their minds, and stomachs, to a much broader notion of food,” University of Queensland Meat Science Professor Dr. Louwrens Hoffman explains. “The biggest potential for sustainable protein production lies with insects and new plant sources.”

Whether or not you think maggots (or other insects) are a suitable substitution for your next hamburger, the Italians that make casu marzu are probably happy to not have to share their delicacy with the world just yet.

After reading about casu marzu, check out the history behind some other Italian foods. Then, take a look at the “dancing squid,” the controversial Japanese dish that features a freshly-killed cephalopod.