The Mouthwatering History Behind Your Favorite Italian Foods

Sometimes, the most delicious meals are made with almost no budget and very few ingredients, as this history of Italian food shows.

Hard times can give way to some pretty creative — and tasty — thinking. Case in point? The majority of your favorite Italian foods. The delicious simplicity of many Italian dishes stems from lack of money, and historical periods when Italians simply had to make the most of whatever ingredients they had.

Many of these dishes have since become more sophisticated in terms of ingredients and preparation, but to celebrity chef Salvatore Cuomo, that just means more potential to lose the heart of Italian cuisine. “The most distinctive thing about Italian food is the limited number of ingredients used,” Cuomo says. “Many chefs around the world just get it wrong — by using very little, you get it right. That is the secret of Italian cuisine.”

For National Italian Food Day — celebrated on Feb. 13th — Cuomo offered us some of his favorite Italian dishes. We’ve sprinkled in some history about them for good measure: 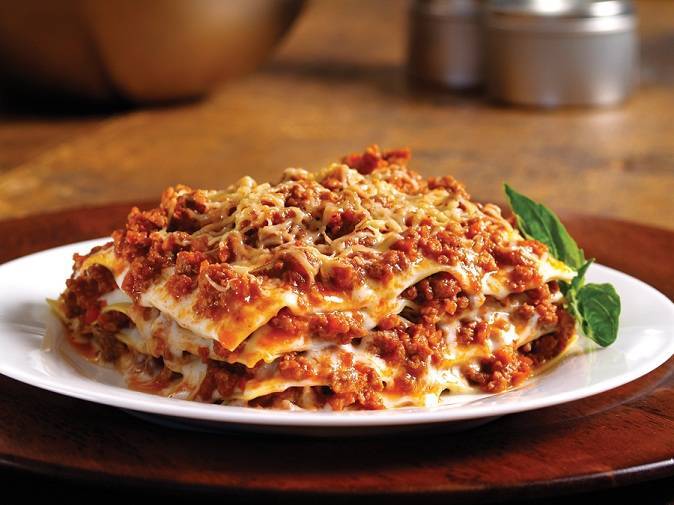 While synonymous with Italian cuisine today, lasagne can actually be traced back to the ancient Greeks. After the Romans toppled the Greek empire in approximately 146 BC, the Romans claimed Greek culture as their own, including its food.

Indeed, the Greek words “laganon” and “lasanon” — or flat dough sliced into strips and an ancient crock pot, respectively — are considered to be the roots of what we now call lasagne. A mass-produced comfort food today, the dish was originally meant for special occasions, making its debut in Naples during the Middle Ages. Salvatore Cuomo 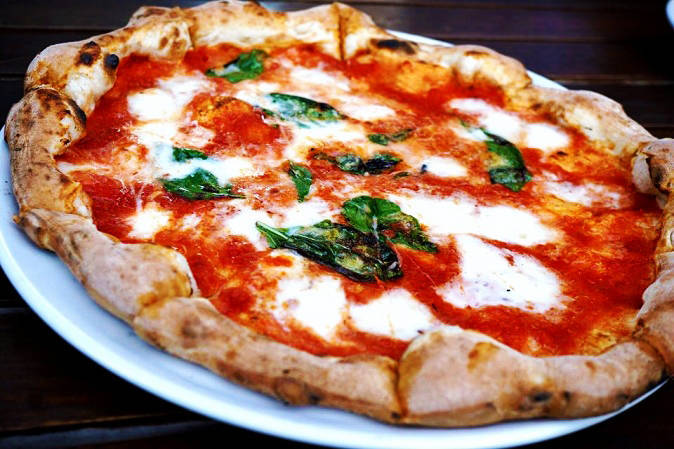 Legend has it that this deliciously simple pizza — tomatoes, basil, mozzarella — was created in honor of Queen Margherita. The story goes that upon uniting the Italian city states in the mid-to-late 19th century, the Queen made a trip to Naples, as part of a good faith effort to ingratiate herself among her still struggling Southern peers.

Margherita apparently had grown tired of the French cuisine which served as the royal European standard, and asked famous pizza maker Raffaele Esposito to prepare her three pizzas. After declaring her favorite — the basil, tomato and mozzarella pie — Esposito is alleged to have named the Italian flag-themed dish after her. Everything, even pizza, can be political.Salvatore Cuomo 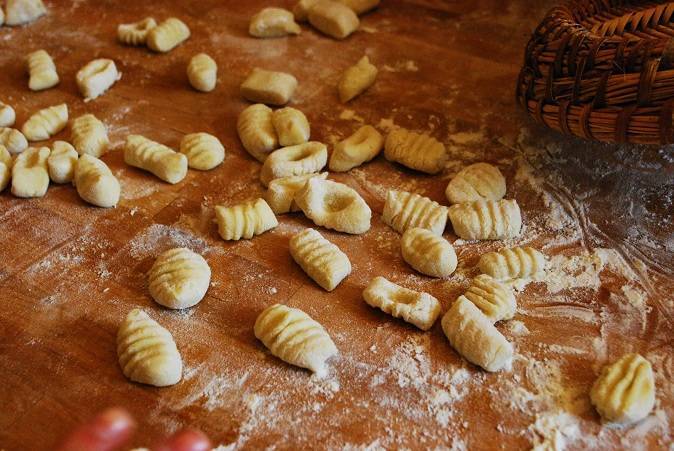 The potato pasta is eaten as a first course, or as an alternative to soups. The food — whose name may come from the word “nocca,” meaning knuckles — dates back hundreds of years, making an appearance in famous Renaissance chef Bartolomeo Scappi’s 1570 cookbook, which called for flour dough and bread crumbs mixed with water, and pushed through a cheese grater.

In the 19th century, Italian cooking connoisseur Pellegrino Artusi published a recipe for potato gnocchi, which is exactly the same way as we see it prepared today. As with any Italian dish, its accompanying sauce and formation vary according to the region in which it is produced. Salvatore Cuomo 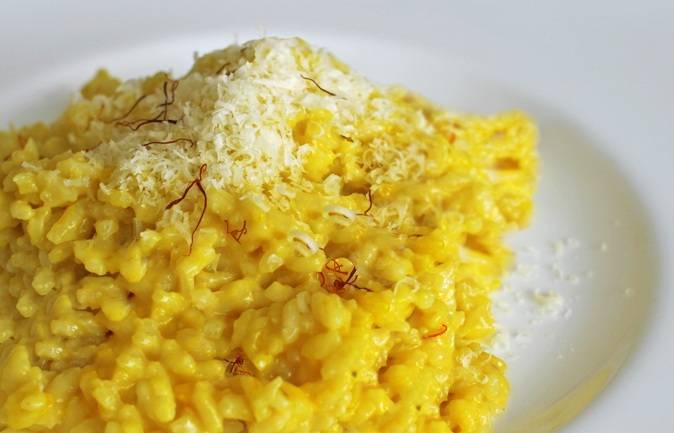 The rich rice dish has roots in trade and domination. The story goes something like this: When the Arabs made their way to Spain in the Middle Ages, they brought with them rice and saffron, among other things. Over time, it was discovered that the short grain rice grew well in the humid Mediterranean climate, making rice a profitable crop in the region.

In Milan, which was under Spanish rule for centuries, rice became a dietary staple, along with the slow cooking principles associated with Spanish rice dishes such as paella. Milanese cooks eventually added saffron to the slow-cooked rice dish, and thus Risotto alla Milanesa — featured above — was born. Salvatore Cuomo 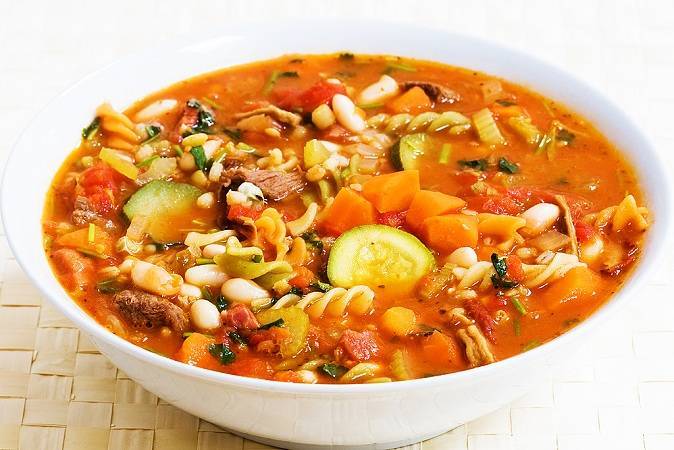 While many Italian restaurants prepare the light soup with the same ingredients each time you visit, the reality is that there is no set recipe: Historically, the dish was made with whatever vegetable happened to be in season. The dish, which is likely pre-Roman, derives from the word “minus” and the suffix of “one,” meaning “minus one.”

In other words, food blogger Victoria Hansen writes, “minestrone” means “left over”: whatever was available was thrown into the pot along with broth, so as to not waste any food. In the food’s early days, it was associated with the “cucina povera,” or the poor’s cuisine. Salvatore Cuomo 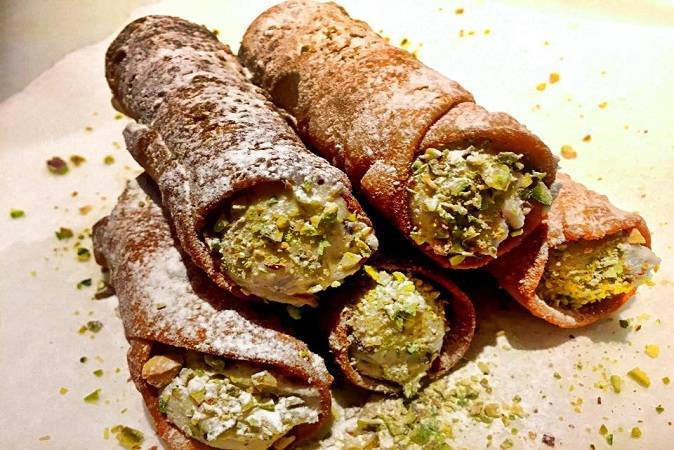 The quintessential Italian dessert stems back to the 10th century, when the Arabs ruled Sicily. Some believe that the ricotta-filled dessert might derive from the Arab sweet known as qanawat, a deeply fried dough tube which was popular across the Arab world at the time. Translated to “little tubes,” cannoli were originally prepared for special occasions such as Carnivale, but today are eaten regularly.Salvatore Cuomo 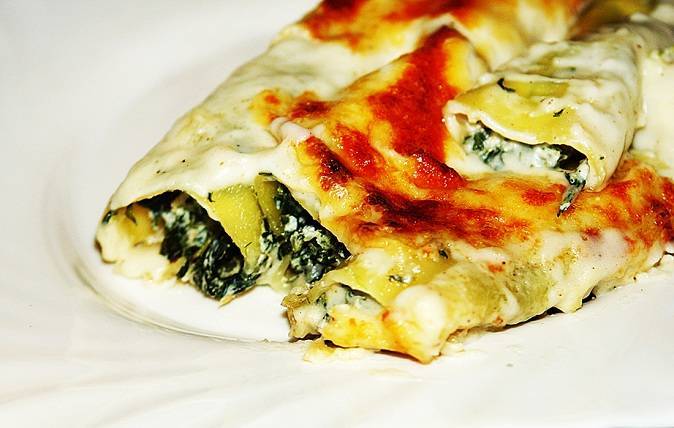 Some believe that the tube-like pasta has its origins in the early 20th century, and is the fruit of Italian chefs Nicola Federico and Salvatore Coletta. The pasta, whose name translates to “thick reeds,” is believed to have been invented in 1907 at a Sorrento restaurant called La Favorita, or ‘O Parrucchiano.Salvatore Cuomo 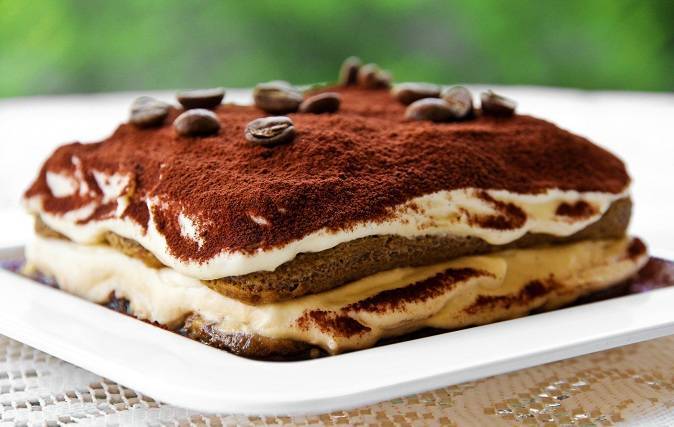 Tiramisu’s origins are hard to pin down. Since the layered cake — whose name means “pick me up” — is made with raw eggs and mascarpone (an uncooked cream), it’s unlikely that the dish was prepared until refrigeration methods were more advanced, meaning some time in the 20th century.

Some say that the dish was developed in the ‘60s in the northern Italian town of Treviso, while others suggest that the Sienese developed the coffee dessert for a visit from the Duke. This theory posits that the dish was such a success that people continued to consume it after the royal event, and it eventually became a national favorite by the late ‘70s. Salvatore Cuomo 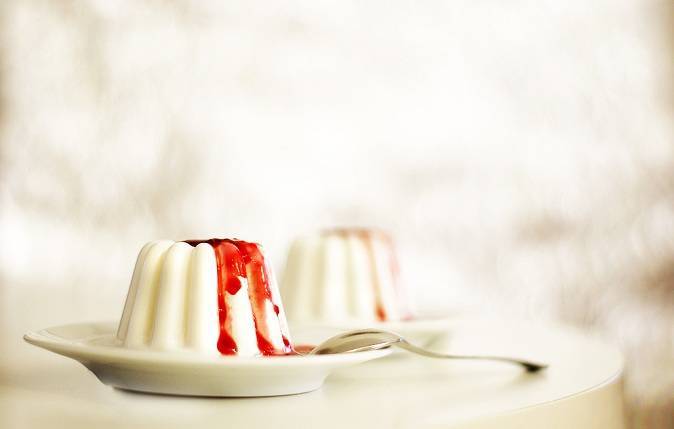 As with tiramisu, panna cotta — the sweetened, gelatinous cream-based dessert with origins in the northern Italian region of Piedmont — doesn’t get mentioned in cookbooks until the ‘60s. This again likely has to do with the advent of modern refrigeration techniques. The dish, which translates to “cooked cream,” can be tailored to suit your tastes, though it’s often made with rum. Salvatore Cuomo 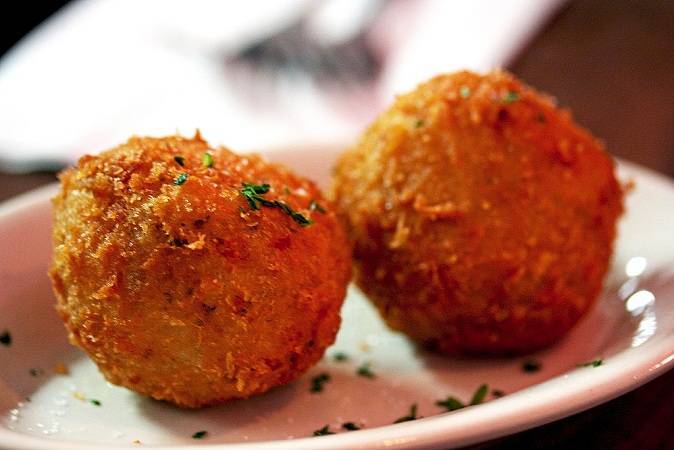 The stuffed rice balls — translating to “little oranges” — are believed to have originated in 10th century Italy, when Arabs ruled the region. There are two primary ways to stuff the dish: one fills the ball with meat sauce, mozzarella and peas; the other fills it with mozzarella, prosciutto and grated cheese. Salvatore Cuomo 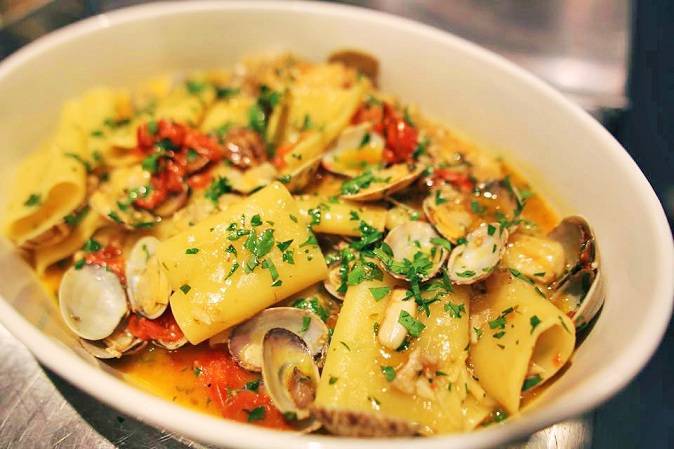 This wide-cut and occasionally stuffed pasta has always been easy to make and is often quite filling, leading some to believe that the dish — like so many other Italian items — was primarily consumed and prepared by the poor when first made. Salvatore Cuomo 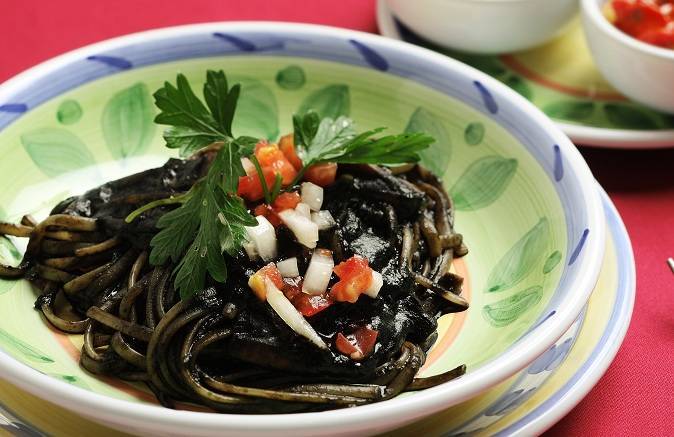 If there’s one thing to be learned about Italian cuisine, it’s that no ingredient — not even squid ink — goes to waste. This Venetian dish is seldom sold in restaurants given its blackening effect on the mouth, and as with many Italian dishes, hearkens back to tough times when rice and pasta could only be flavored with, well, ink. Salvatore Cuomo 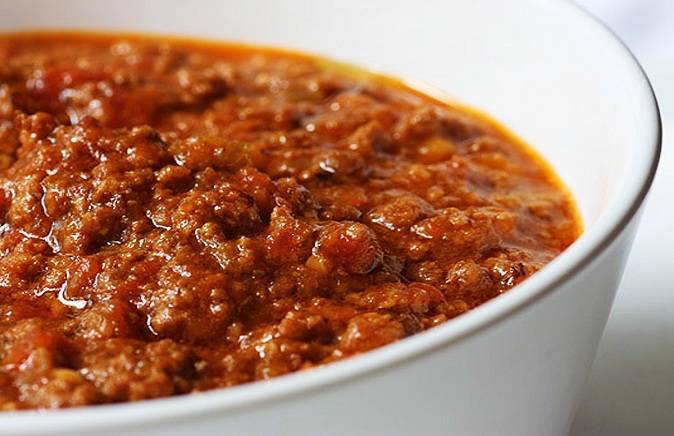 The meat-based sauce has roots in the 19th century, in the town of Imola, close to Bologna. Italian cuisine authority Pellegrino Artusi charactetized this meat sauce (ragù) as “bolognese” in 1891, for a recipe dubbed “Maccheroni alla bolognese.” The recipe called for a lean veal filet with pancetta, butter, onion and carrot, and for it to be finally minced and cooked with butter until brown, and then covered and cooked with broth. Salvatore Cuomo 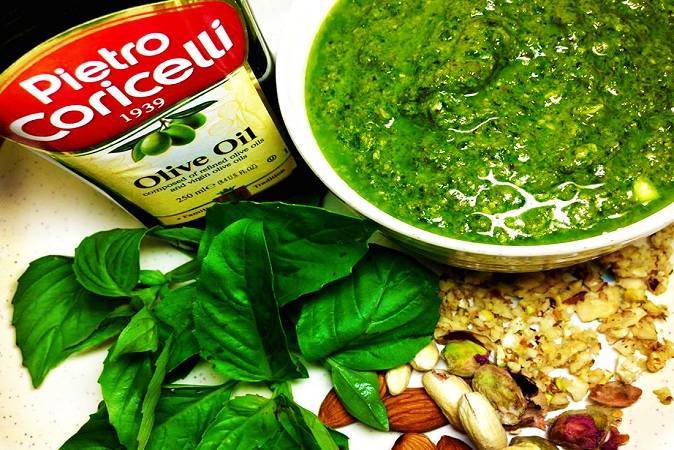 Pesto derives from the Italian verb “pestare” — which means to pound or to crush — and refers to the original way the basil sauce was prepared. Technically, the name refers to the process, not the ingredients, which means that pesto doesn’t have to utilize basil to be called pesto, though that form is still the most popular worldwide.

In fact, the addition of basil — perhaps the most immediate signifier of pesto — is a relatively new addition. The sauce, which might date as far back as Roman times, didn’t incorporate basil until 1863, when gastronomist Giovanni Battista Ratyo included basil in his book, “La Cuciniera Genovese,” or the Genoese cook. Salvatore Cuomo 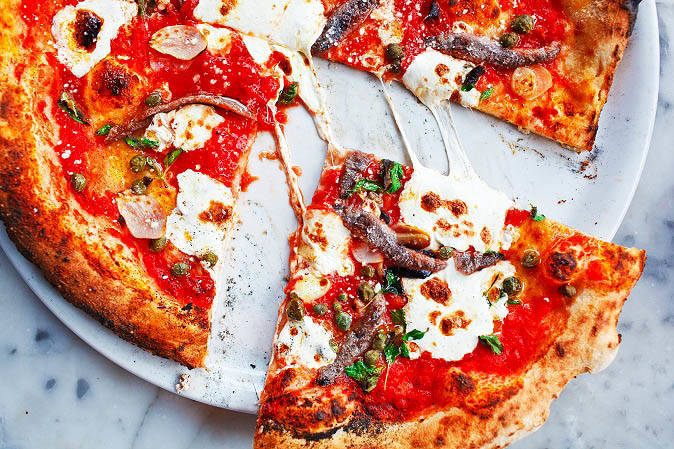 The anchovy is one of pizza’s most neglected toppings, but its existence is steeped in rich history. Italians have peppered bread with fish for at least two millennia, and fish were one of the first toppings when pizza as it is known today was developed in late 18th and early 19th century Naples. The anchovy added a bit of gustatory intrigue to an otherwise plain pie, and on the cheap: the salty fish was in high supply at the time and could be preserved indefinitely, making it a popular topping for the poor. Salvatore Cuomo 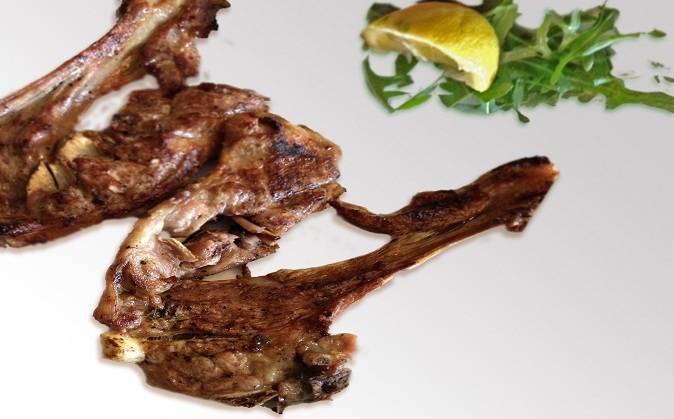 “Scottadito” means “burned fingers” in Italian, which humorously implies what happens when the sumptuous dish — fresh off the grill — makes it to your plate. Lamb has a long culinary history in the Mediterranean region, as sheep husbandry expanded from Mesopotamia to Asia Minor and then southern Europe, inching ever westward toward Britain as the Roman empire gained territory. Scottadito is a common Roman preparation of lamb, in which the lamb is slathered with lard and seasoned with salt and pepper, then slapped on a hot grill. Salvatore Cuomo 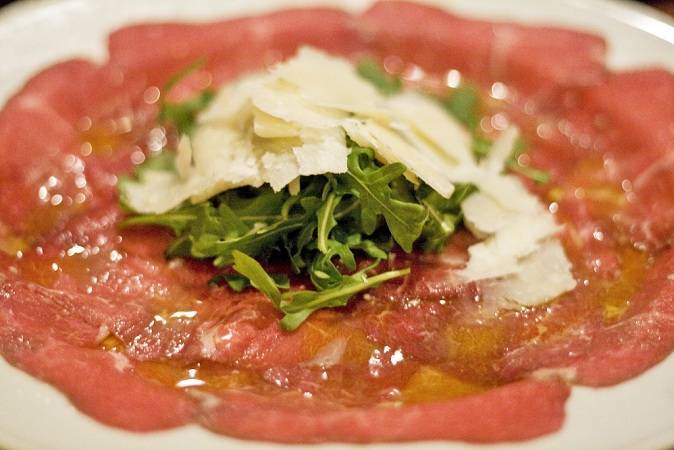 In terms of names, beef carpaccio is a relatively new dish: It was given its international moniker in 1963 at an exhibition dedicated to Venetian painter Vitore Carpaccio, who painted in red and white tones similar to those of the raw meat. The dish is based on the northern Italian dish, “carne cruda all’albese,” which was invented in Venice for countess Amalia Nani Mocenigo when doctors recommended that she consume raw meat. Salvatore Cuomo 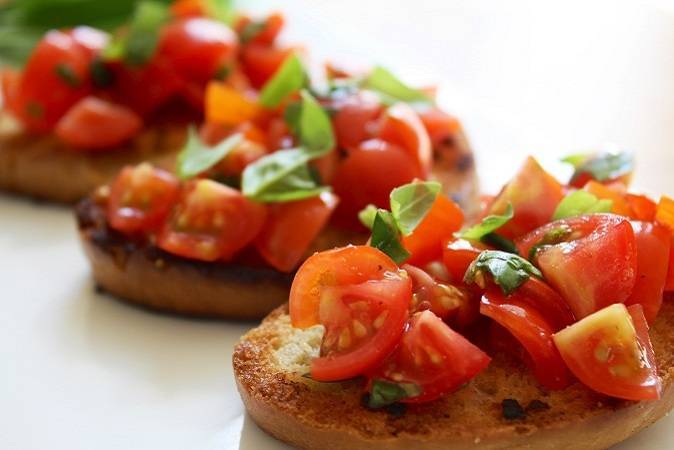 The name of this crispy bread comes from the Roman dialect verb “bruscare,” which means to roast over coals. Italian cookbook writer Marcella Hazan writes that the dish likely originated in ancient Rome, “when olive growers bringing their olives to the local olive press would toast slices of bread to sample their fresh-pressed oil.” Salvatore Cuomo 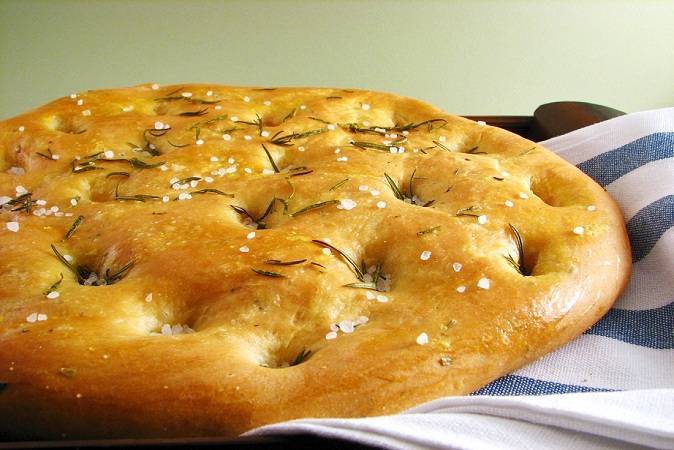 The term derives from the Latin word “focus,” which means “hearth, place for baking.” The iconic Italian bread’s flavors and appearance vary according to location. In the North, some focaccia favorites include focaccia dolce or sweet focaccia. In the South, you’ll likely encounter potato focaccia, which features thick potato slices, or the “classic” focaccia, which includes tomatoes and olives. Salvatore Cuomo

Want more food and drink goodness? Check out how macarons and tiramisu are made.