Godawful Foods From Around The World

People will eat just about anything given the proper (or lack of) resources. Here are some of the worst examples we could find of gross food.

American cuisine is famously unhealthy and the people who eat it are among the fattest humans in history. It turns out that high-fat, high-cholesterol, heavily processed food byproducts slathered in salt and oil isn’t good for you. It’s just gross food.

This is even more true when the food is washed down with half a gallon of high-fructose corn syrup and combined with less exercise than some coma patients get. But you know what’s cool about America, world? We don’t eat bugs! 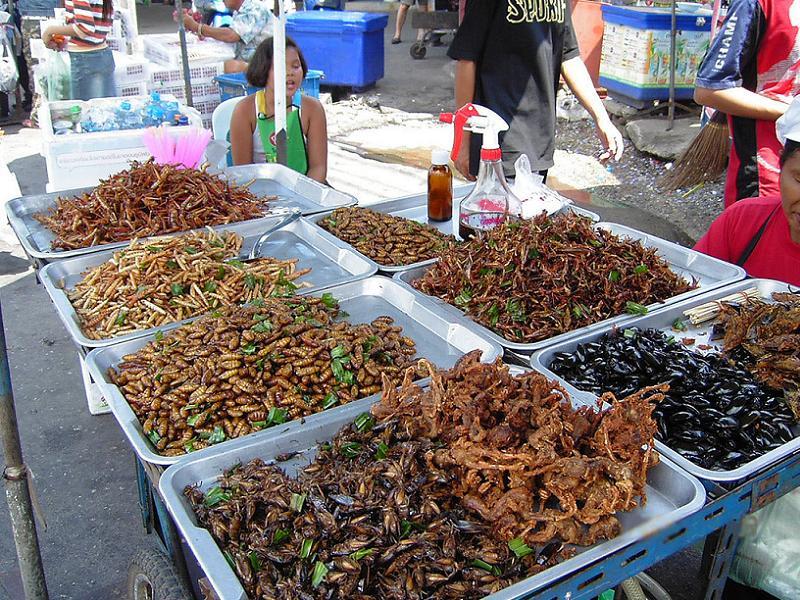 That front bin is filled with crickets and scorpions. We have no idea how you're supposed to eat scorpions, so we'll go with "don't." Source: Wikimedia 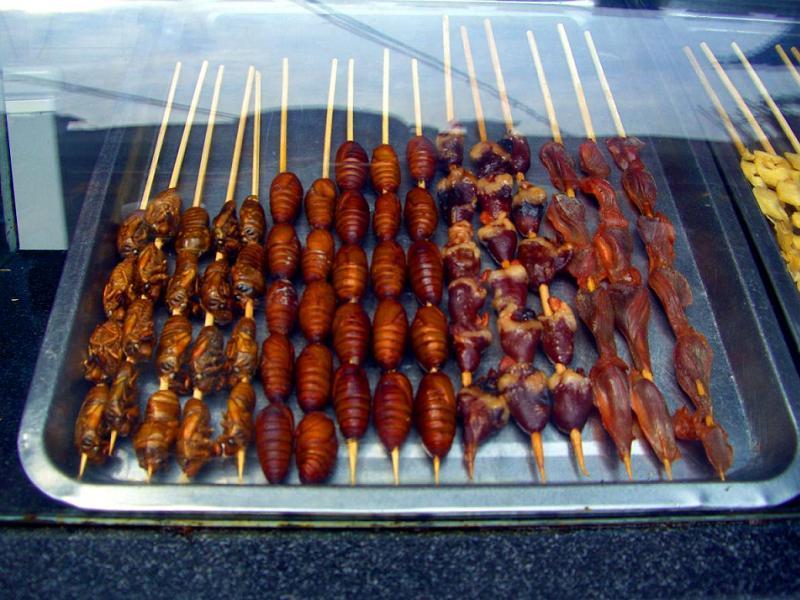 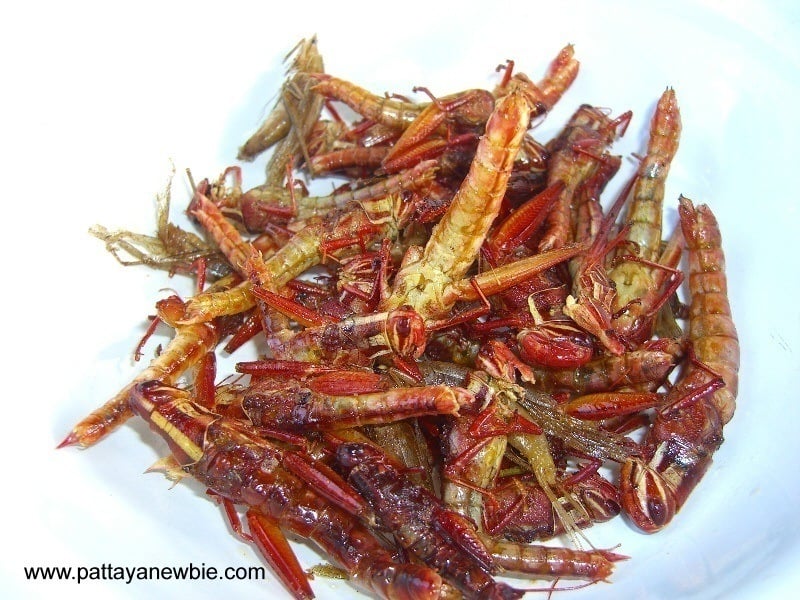 "Oh, no! A plague of locusts has descended and eaten all our crops! Whatever shall we eat now?" Source: Pattaya Newbie 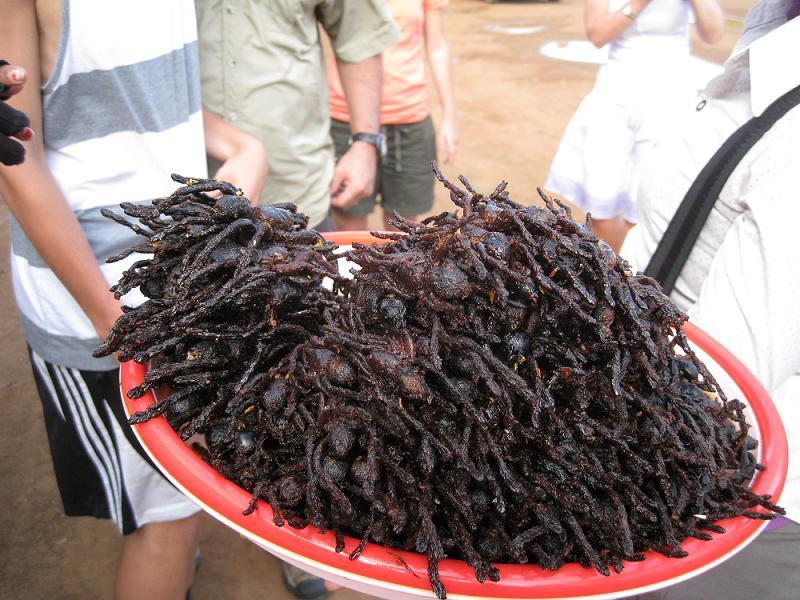 The obligatory platter of tarantulas. Get a 19-year-old waitress in hot pants to serve this up during the Super Bowl . . . yeah, we can see this taking off here. 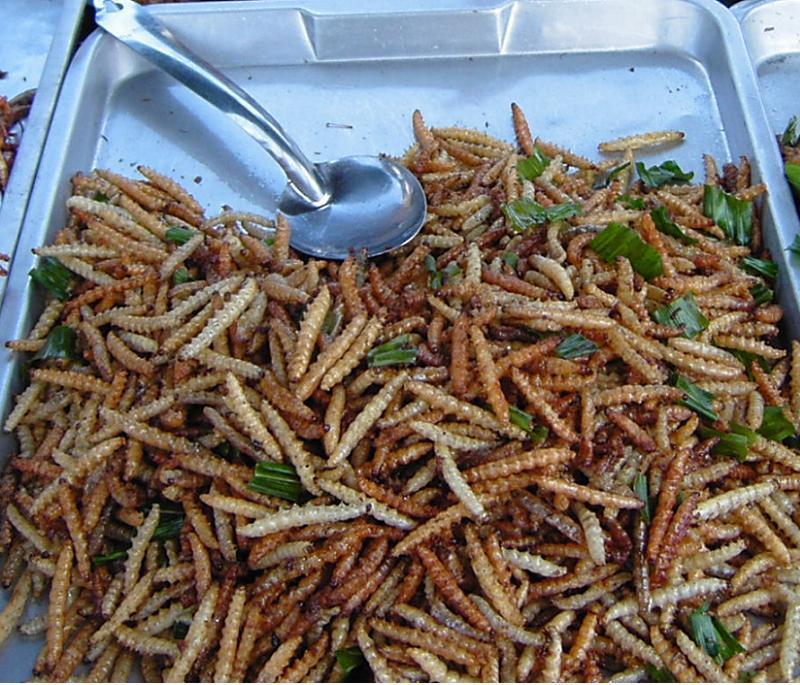 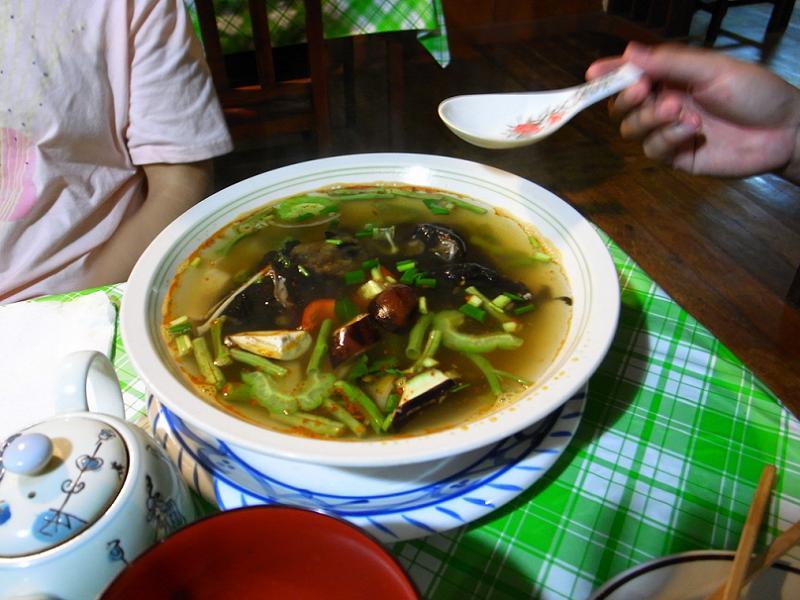 Now this is more like it. That's clearly a type of soup, and it has all kinds of fresh vegetables in it. What do you suppose that dark mass in the bottom is? Probably some kind of seafood, right? Maybe a species of mussel unique to Palau or something . . . Source: Nasha Planeta 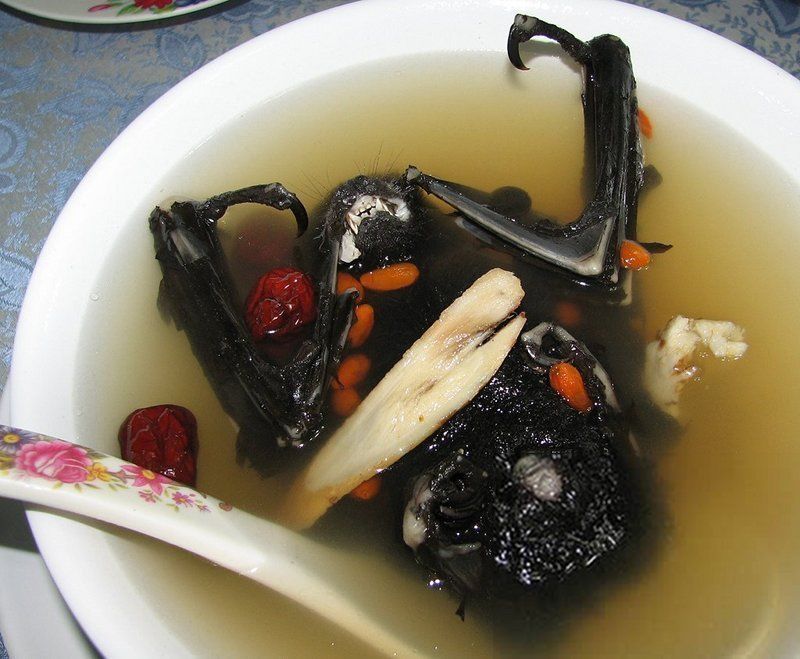 Oh. It's, um . . . that looks like a bat. A whole bat. Fangs and claws and everything. Full disclosure: this article is sponsored by every tourist bureau in the world that's competing with Palau. Enjoy your vacation to literally anywhere else! Source: DEZ Info 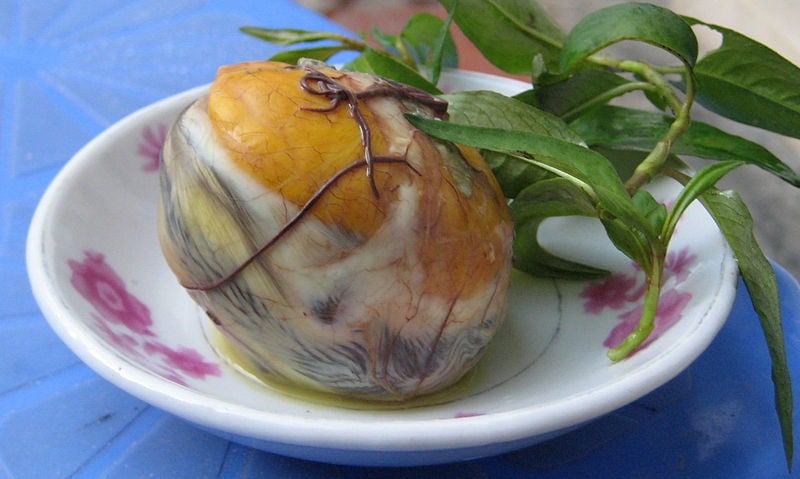 Balut is one of the more popular dishes in Southeast Asia and the Pacific. It's that rare food that crosses national and ethnic boundaries and can be enjoyed by people from dozens of cultures across a wide area of the Earth. It's also a goddamned duck embryo. The trick is to let the fetus develop to the point of hatching, then boil or fry it up and eat the whole thing including the beak, feathers, and bones. This artfully presented horror is from Vietnam, where the egg matures for up to 21 days. Source: Blogspot 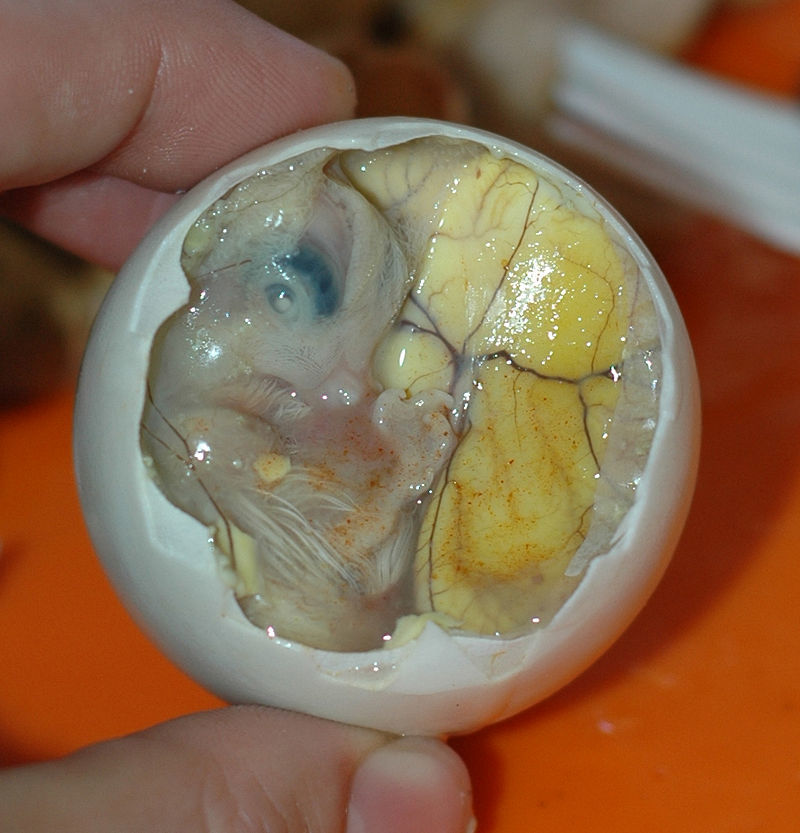 In the Philippines, balut is only aged for about two weeks. You wouldn't think people from such a Catholic country would be in the habit of eating abortions, but maybe the shorter term of gestation has something to do with it. Source: Food n Culture 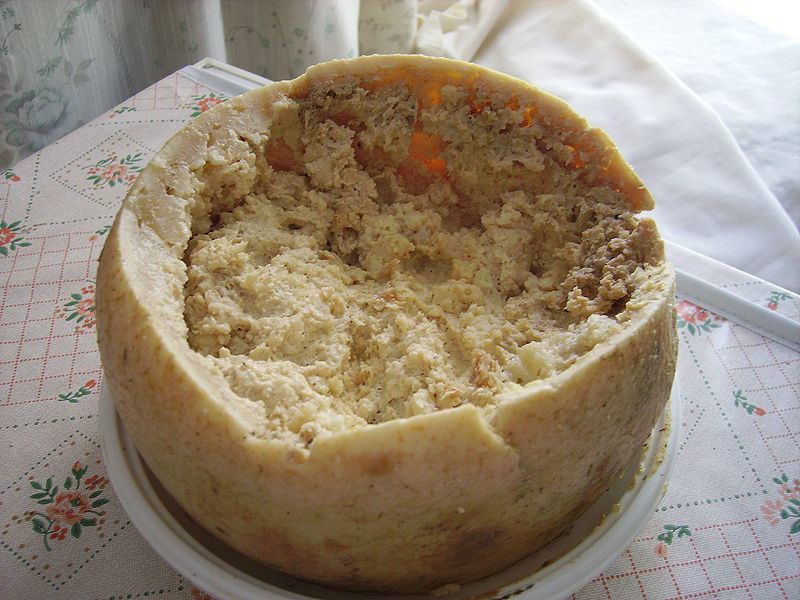 All of the things we've gone over so far have been gross or odd from a Westerner's perspective, but that really just comes down to cultural bias. Sure the balut is gross, but people raised on it don't think so, and it's probably better for you than the BBQ wings you get at the strip club. In fact, a strong case can be made for eating crickets and grasshoppers, however foreign it seems. None of that stuff is acutely dangerous, after all. But this is casu marzu. Its name is (allegedly) derived from "cacio marcio," which is Italian for "rotten cheese." When Italians say a cheese is rotten, believe them. Source: Caustic Soda Podcast 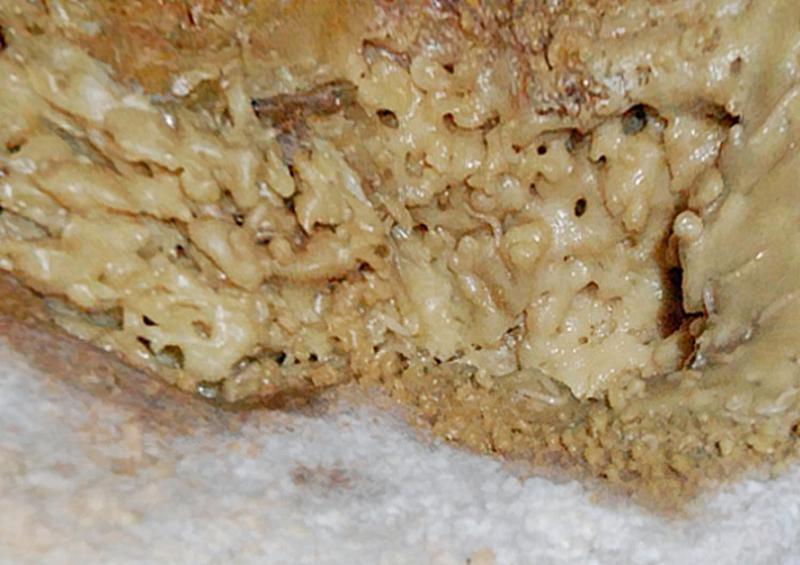 How rotten is it? Take a close look. Each of the lumps in this closeup is a writhing maggot. Here's how you make a traditional casu marzu: get a goat kid at the suckling stage. If the kid eats a single mouthful of grass, the recipe is ruined. Its stomach needs to be full of its mother's milk. Butcher the kid, seal its stomach—acid and all—and hang the thing near a window. Let it sit for a few weeks while the flies get at it and lay their eggs inside. Just as the smell has gotten so bad that the neighbors are calling the cops to report a suspected murder, cut it down, break it open, and enjoy it—maggots and all—with flatbread. Source: Img Kid 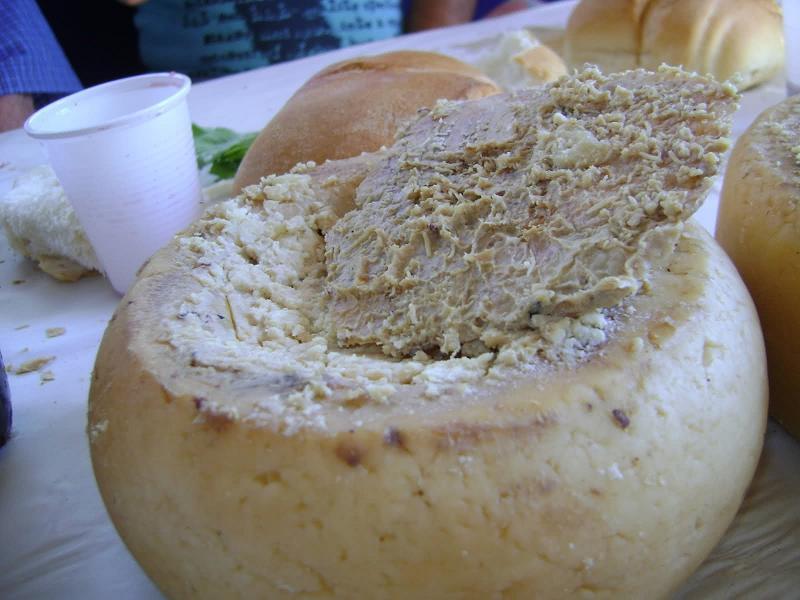 A few words of caution; first, those maggots jump, so wear a bib. Second, a properly aged casu marzu has rotted so hard that the fumes literally make the eyes water and burn the mucous membranes. The Italian government was actually moved to ban the cheese for several years, which worked as well as banning alcohol or marijuana generally does, but the European Union has recently declared the cheese "traditional" and lifted the ban. Source: YouTube 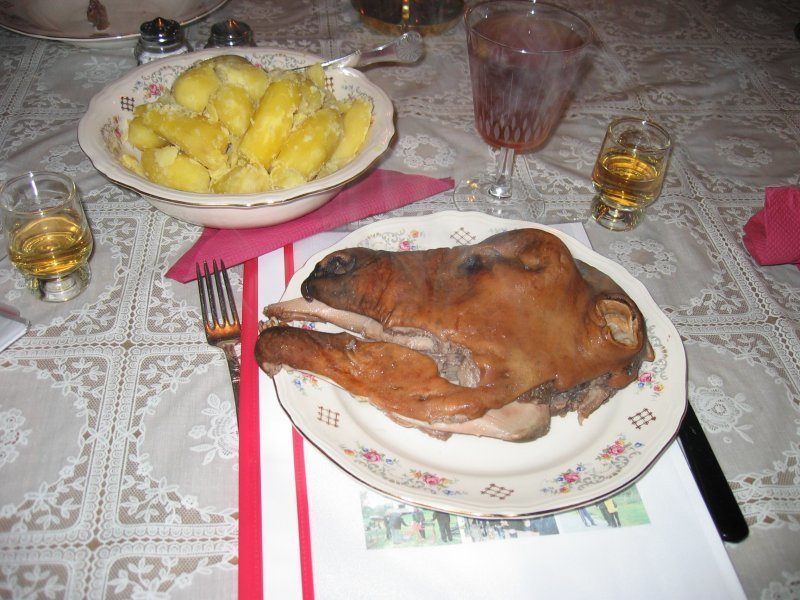 Smalahove is the kind of thing that happens to you when you visit Norway. Despite appearances, it isn't a threat. It's actually one of those dishes that's currently making the transition from a degraded peasant meal to a national delicacy that's served with expensive wine. Source: Porjati 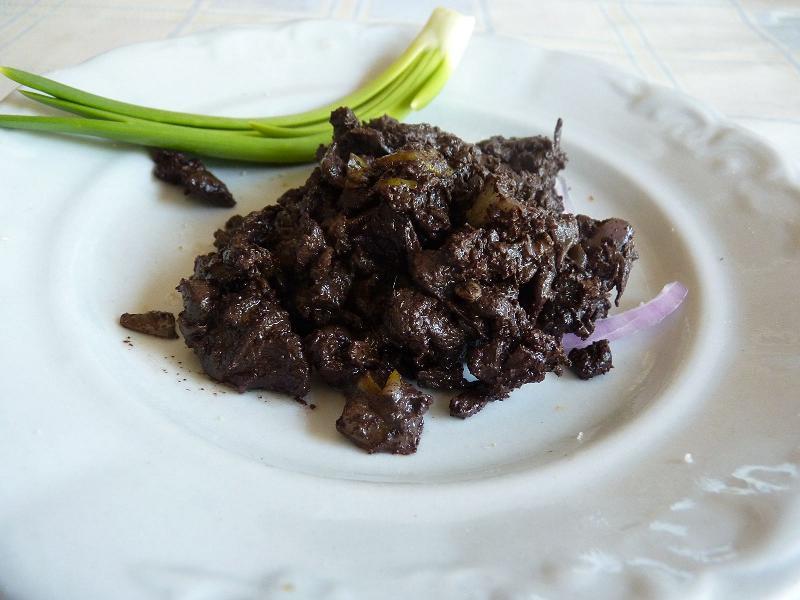 What do you suppose this is? There's a purple onion over there, so it probably isn't a dessert. Is it fried oysters and flour? Diced potatoes and lard? Pigeon brains, thickening agent, and cheese? Nope, it's hagymás sült vér, it's Hungarian, and it's fried pig's blood that's served for breakfast. This is also probably one of those "traditional" things that whole families crossed the Atlantic to escape during the 19th and 20th centuries. Source: Nasha Planeta 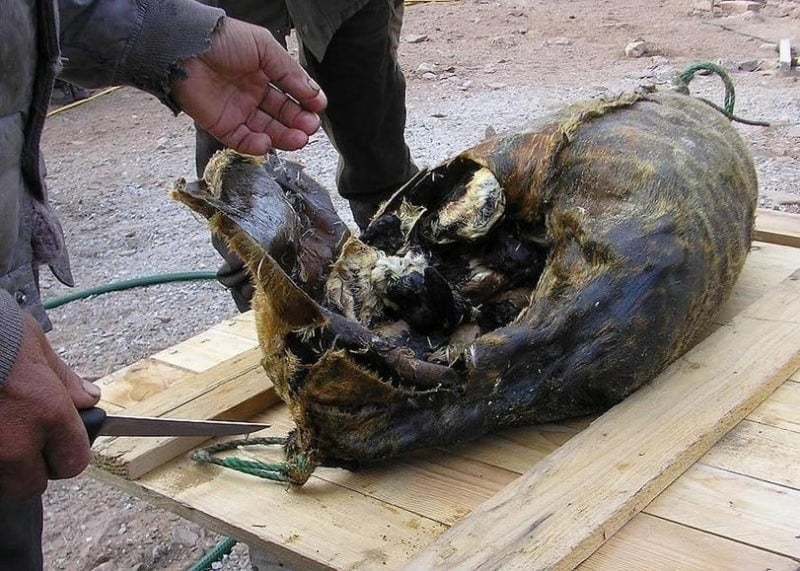 Speaking of crossing the Atlantic, here's kiviak, which is hugely popular in Greenland. Well, it's as popular as anything can be in a land with fewer inhabitants than Kokomo, Indiana. Source: Funik 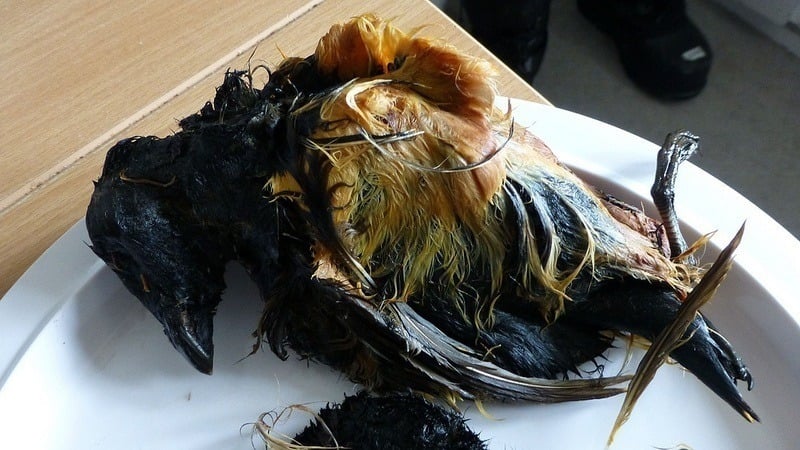 In case you're thinking of throwing a traditional (there's that word again) Greenlandic wedding, kiviak takes some prep time. First, you have to catch hundreds of auks and stuff them inside a sealskin bodybag. Then press out the air, stitch it closed, and seal the thing with grease. All you have to do now is bury the thing under a bunch of rocks and let the delicious anaerobic bacteria go to work. The auks rot for between 3 and 18 months, at which time the whole package is ready to split open and eat. Source: Food and Wine 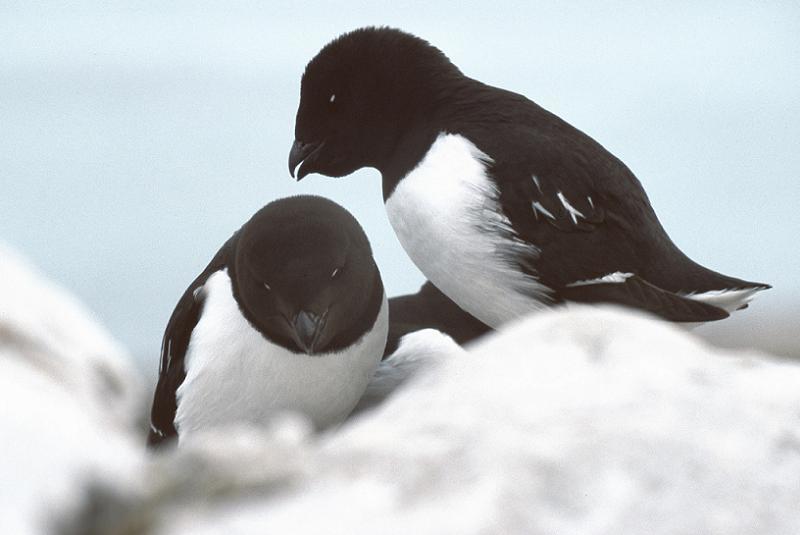 When preparing your kiviak, be sure to use only genuine auks—the more adorable the better—and accept no substitutes. In 2013, several people were taken ill after eating a kiviak that had been stuffed with eiders, which apparently don't rot as well as auks do. Live and learn. Source: Wikipedia 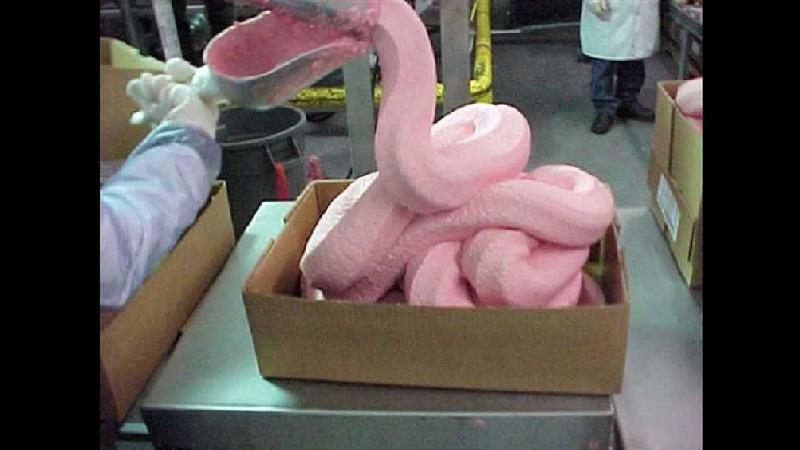 Just in case you were concerned about the possibly ethnocentric slant of this article, here's some pink slime for you. Soylent Pink, as it's sometimes called, is made by scraping the lowest-quality beef trimmings from the inside of the cow's hide, and other locations, grinding it up, and putting it into a centrifuge. This squeezes out the fat, and the remaining product is pushed through tubes for a dose of ammonia gas or citric acid, which kills off the salmonella. The slime that comes out the other end may then be used as a bulk filler in beef—up to 15 percent by weight—and sold without any additional labeling in the United States. Pink slime is illegal in Europe, though we like to imagine a thriving underground smuggling operation. Source: YouTube

Ok, so maybe that's a little harsh to say. On reflection, eating bugs makes a lot of sense. Most invertebrates aren't poisonous, after all, and they have a knack for processing the huge piles of waste we create into edible flesh. God knows there's no shortage of them, and unlike pigs and cows, arthropods are so distantly related to humans that it's highly unlikely we'll ever get the flu from handling them. Still gross. Double gross, in fact.

Don't believe me? Go ahead and check out our collection of gross food for yourself. Well, not ours. Other people's. Which they can keep, thanks very much.

If you enjoyed this look at food that makes us cringe, be sure to check out our other posts on scary contraceptives and painful Medieval torture devices. And be sure to like All That's Interesting on Facebook!