Here's everything you ever wanted to know about your feline sees the world. 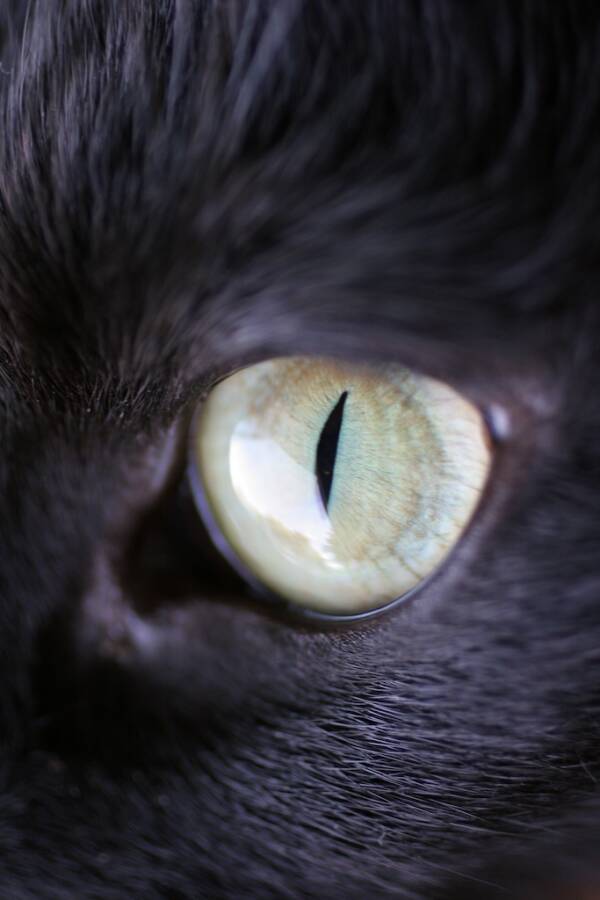 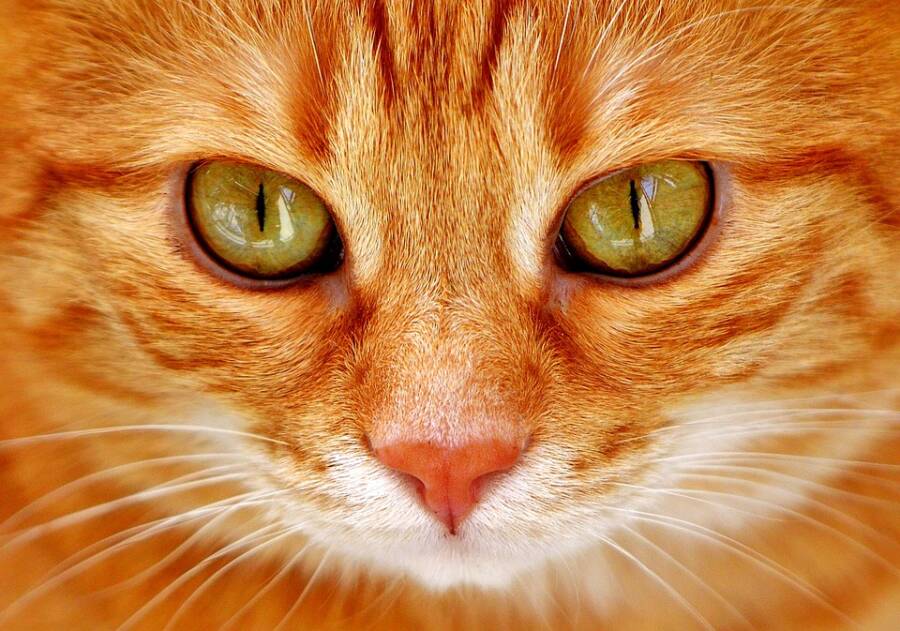 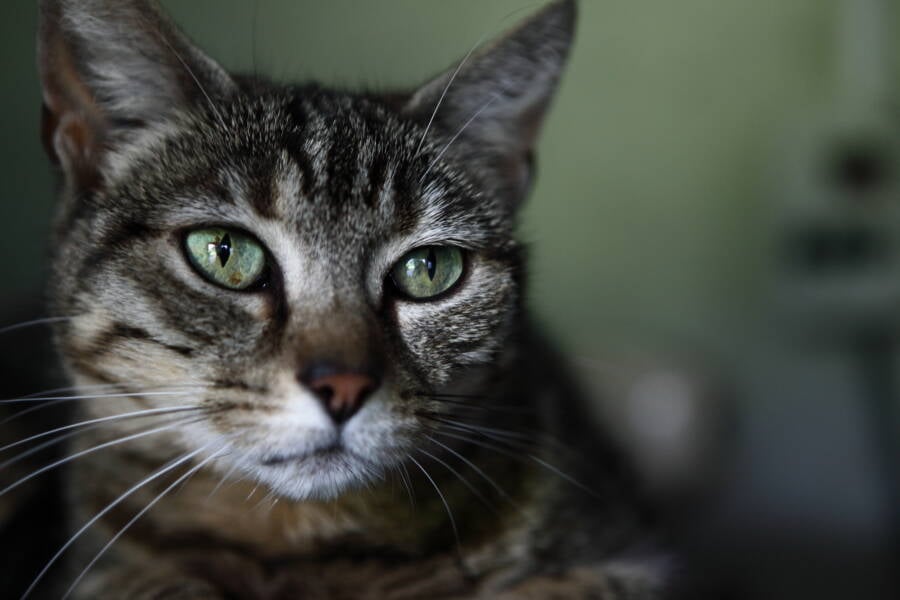 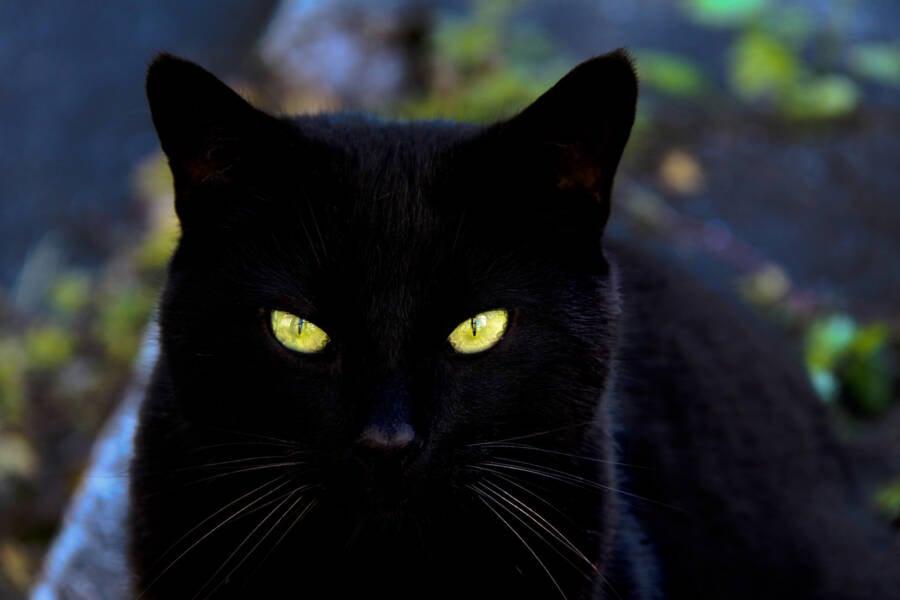 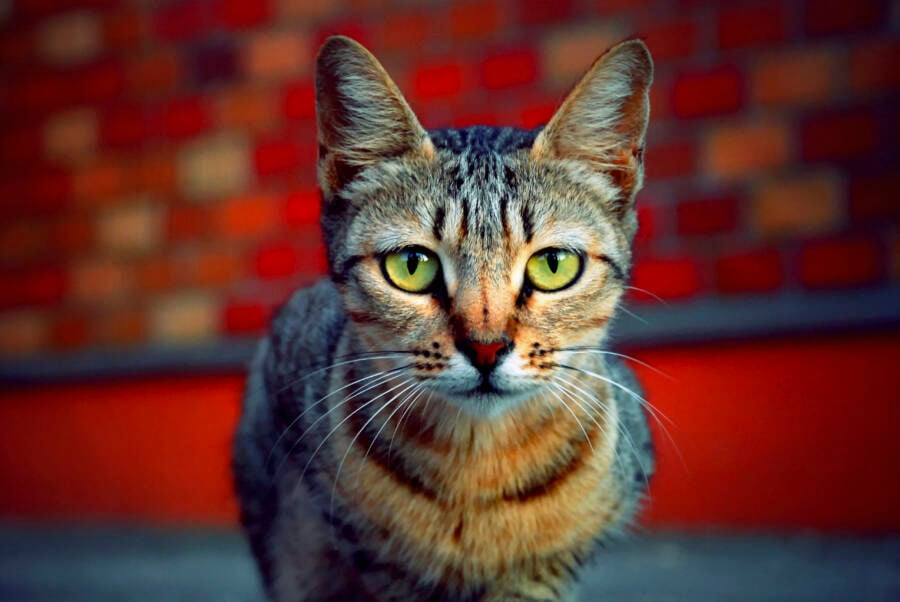 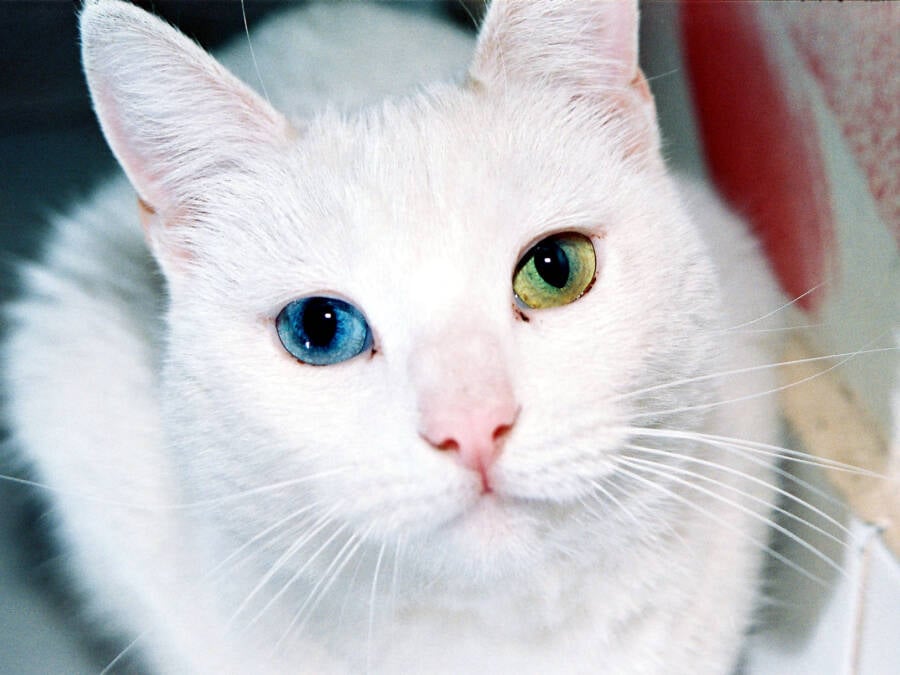 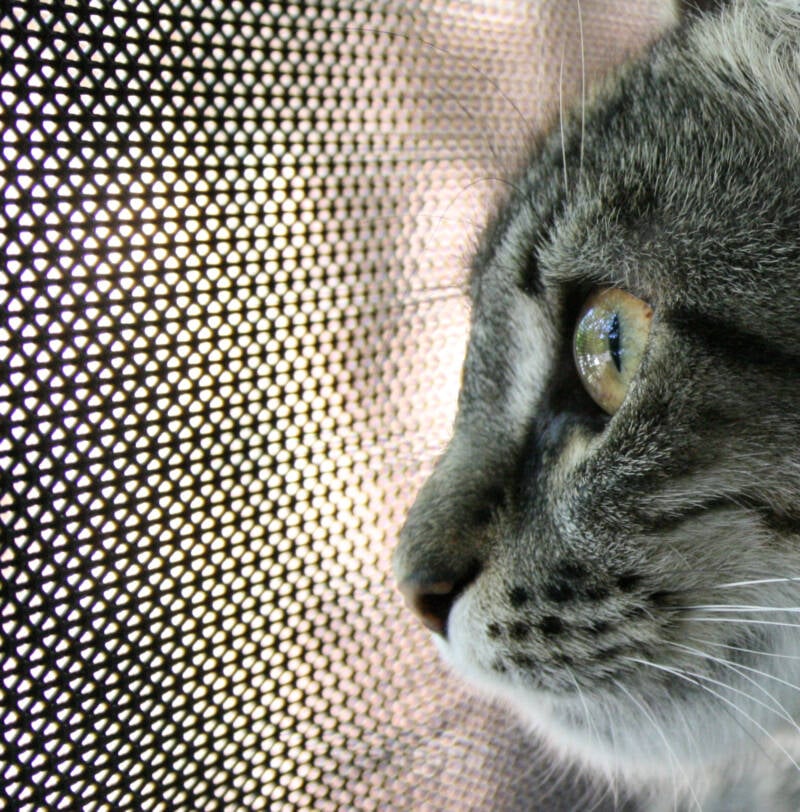 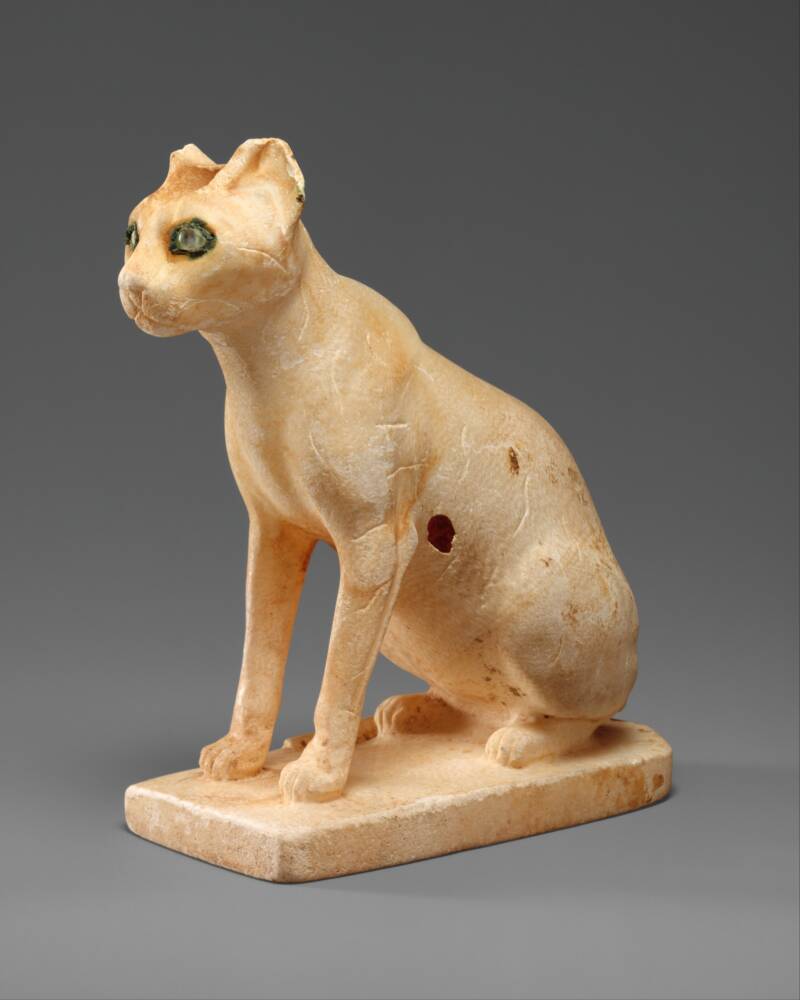 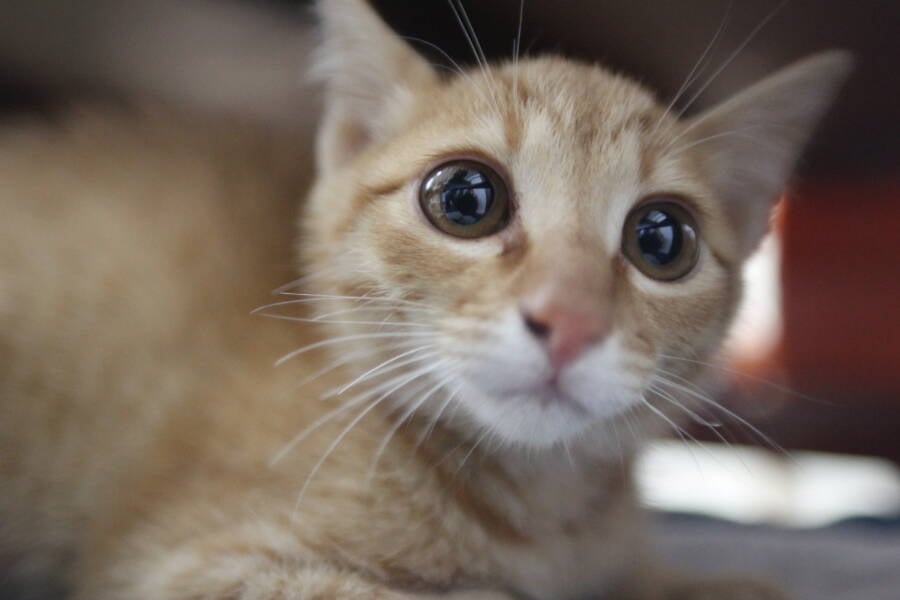 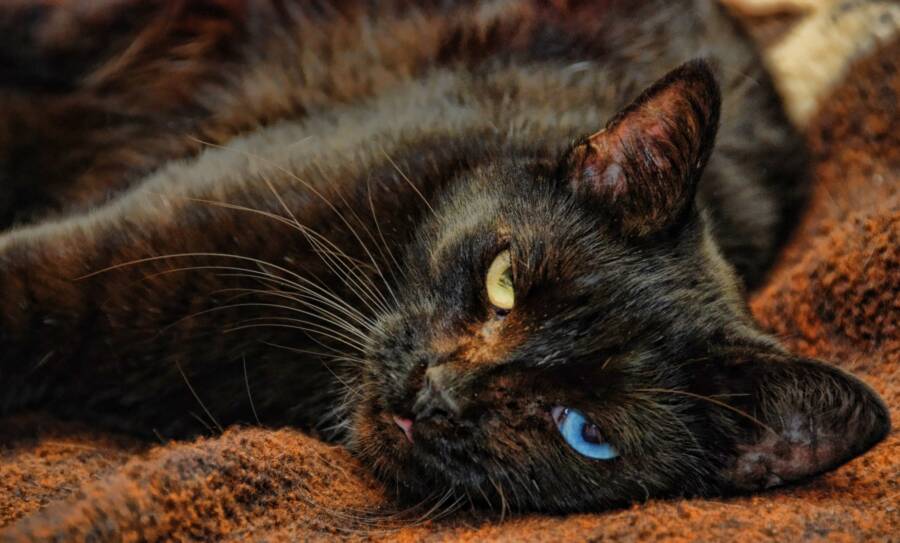 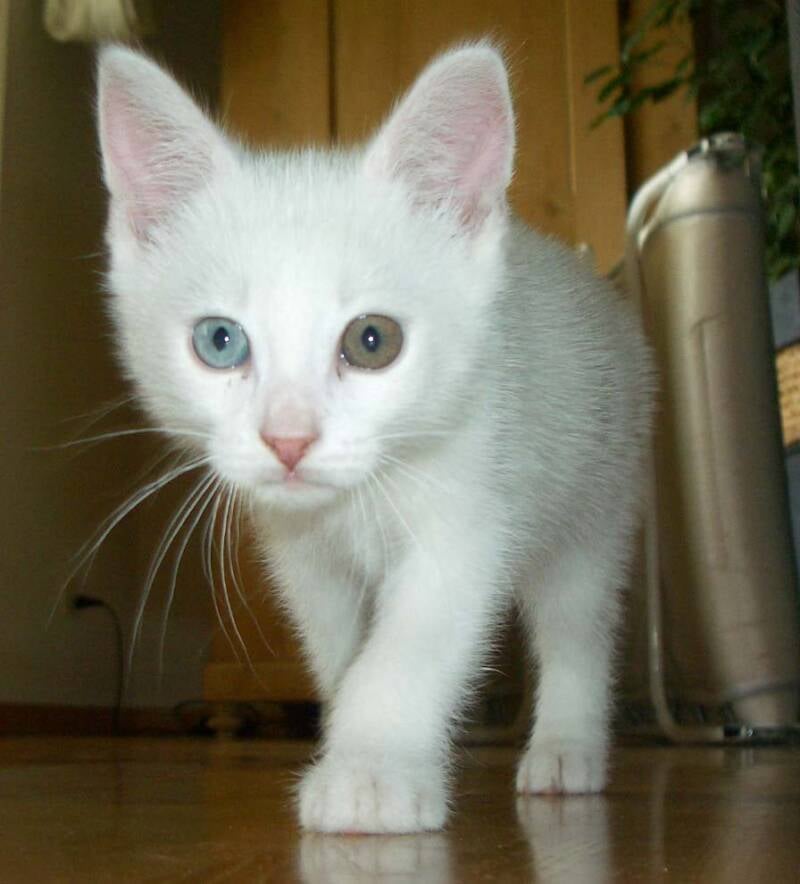 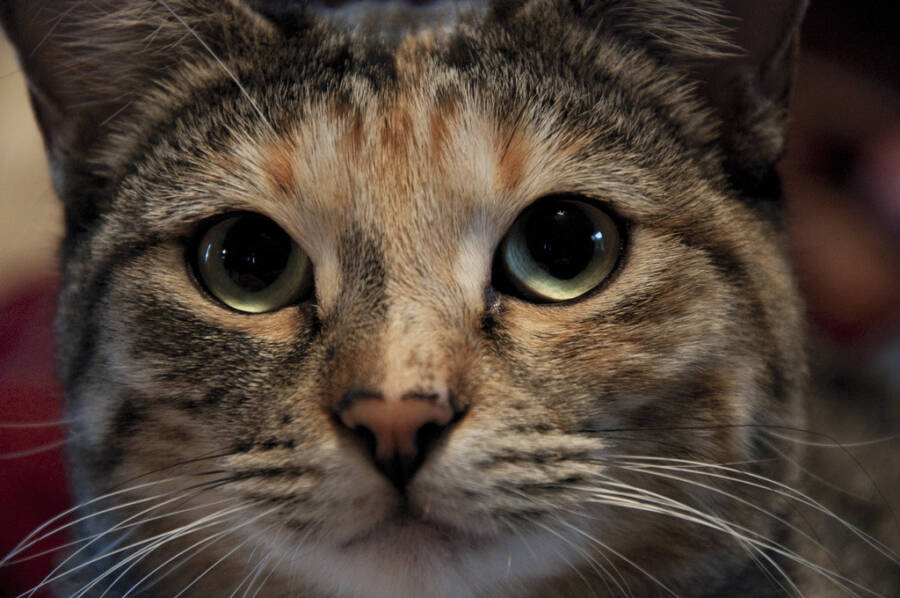 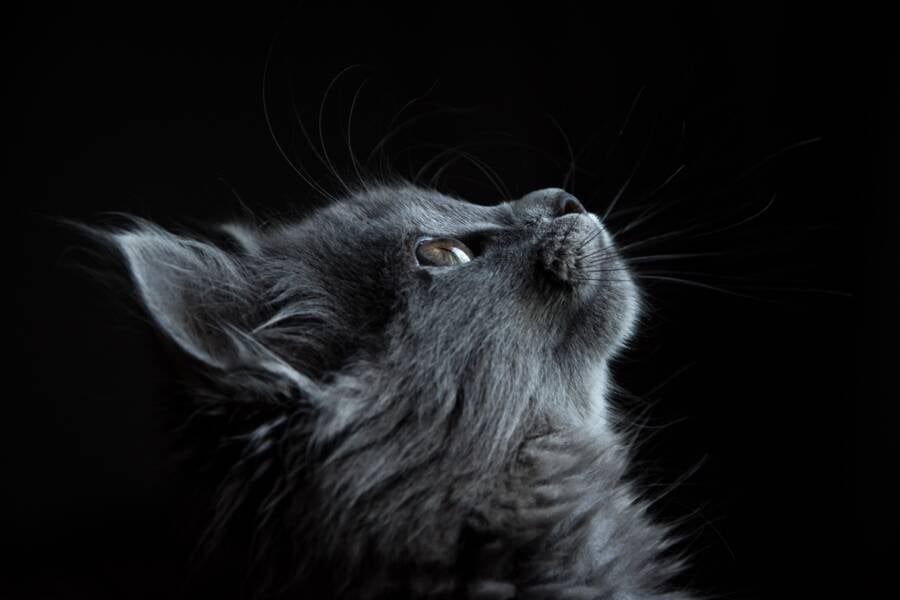 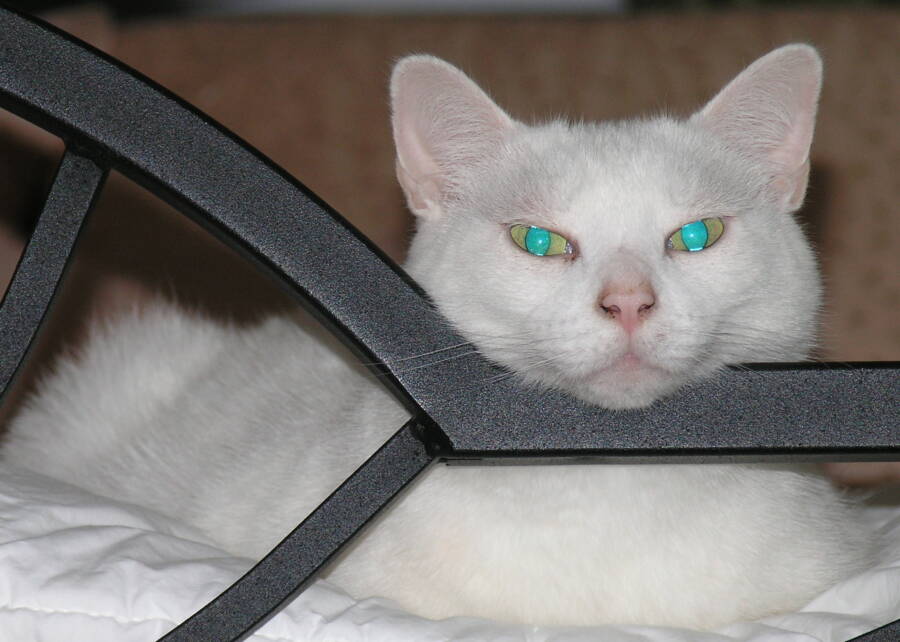 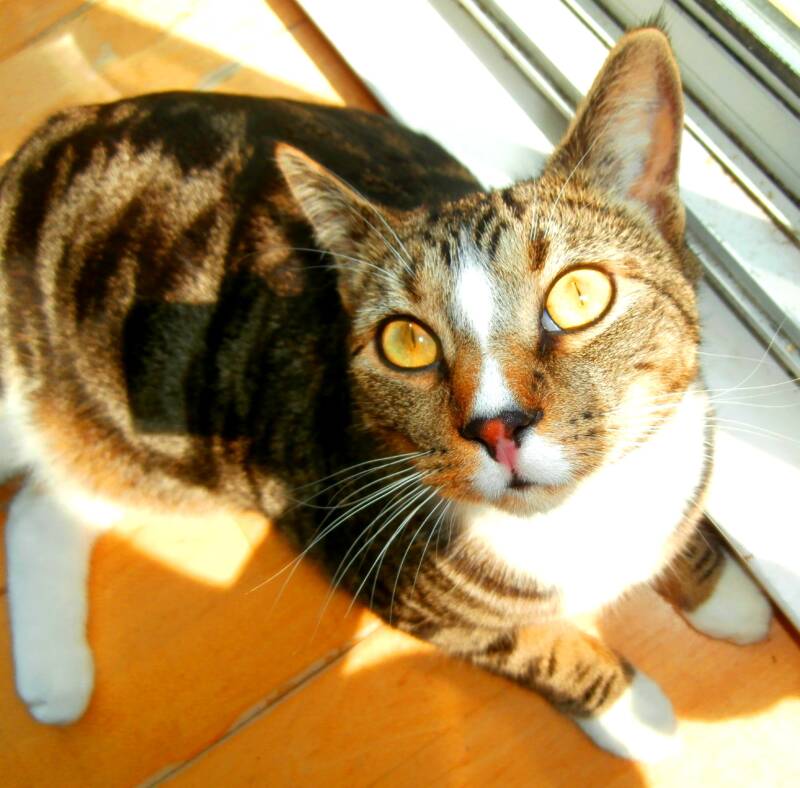 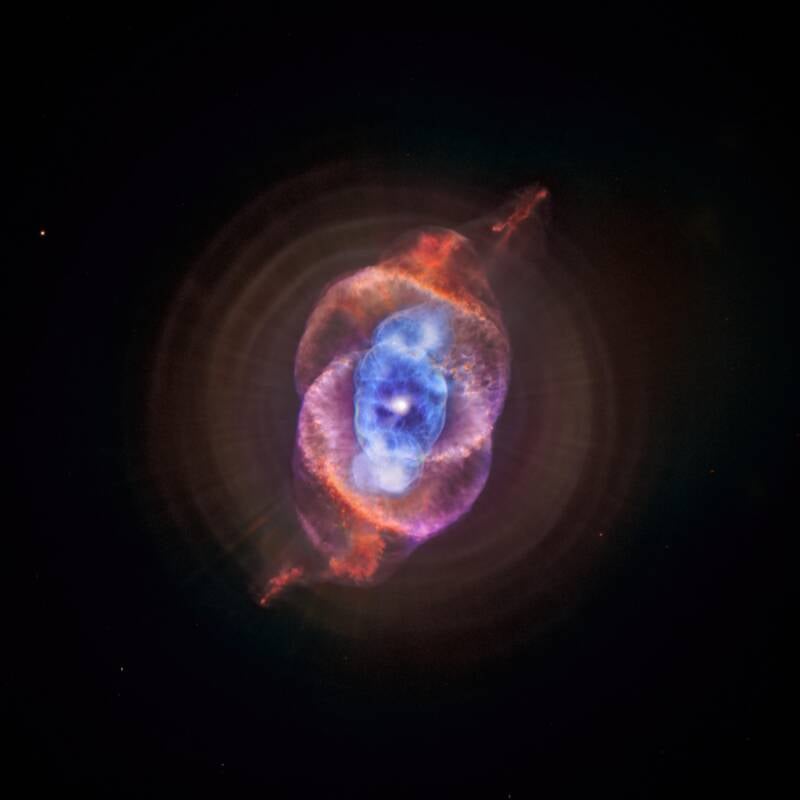 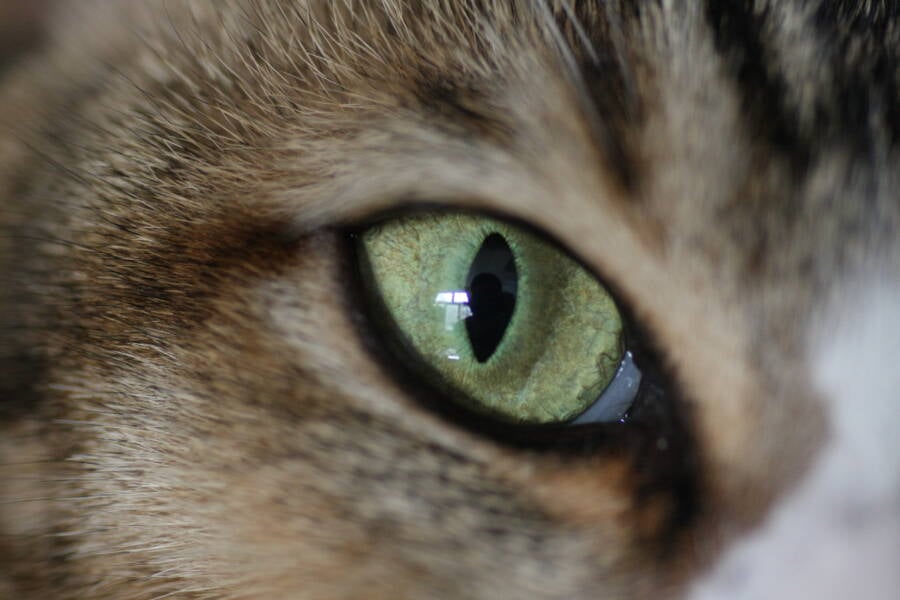 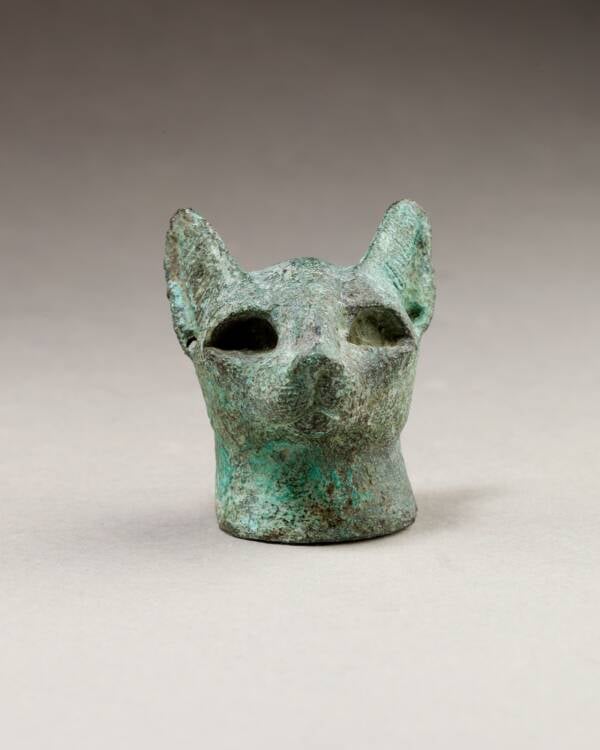 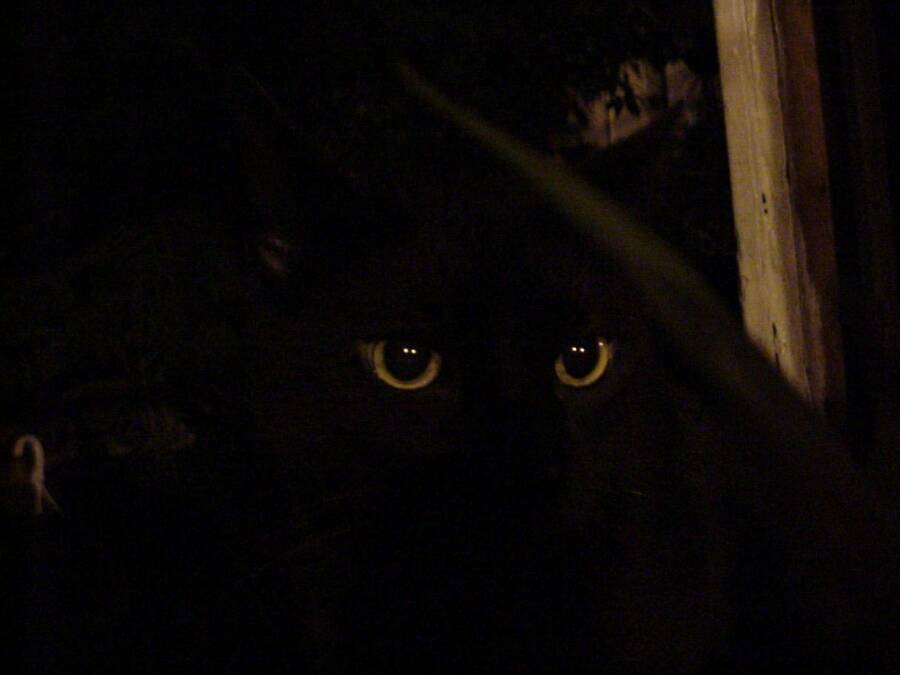 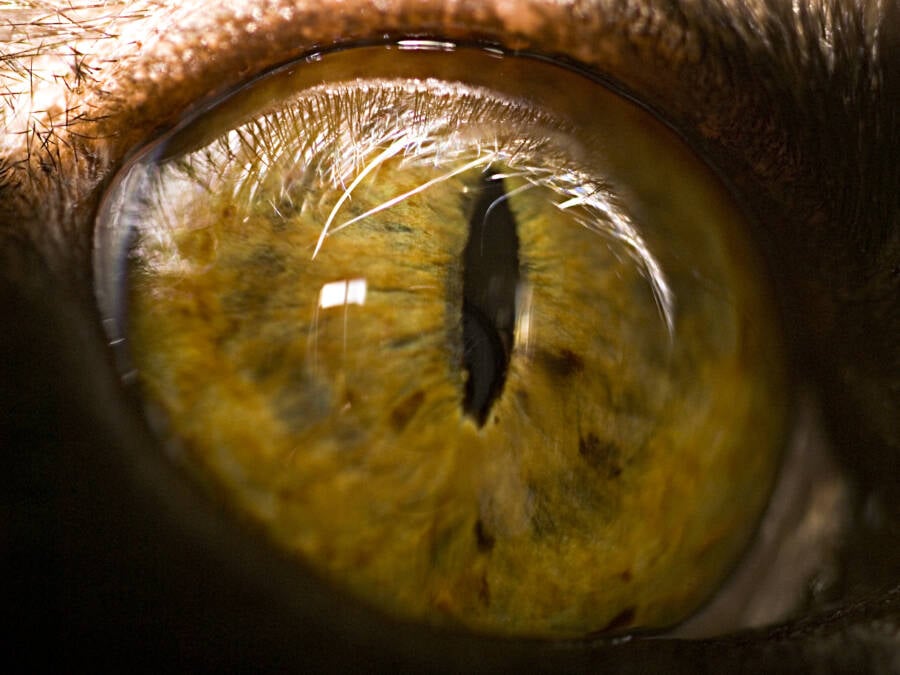 1 of 22
Cat irises seem to come in unlimited colors.Wikimedia Commons
2 of 22
Pixabay
3 of 22
Cat's eyes, just like a dog's or yours, can be expressive. Partially closed or entirely closed eyes can signal comfort or relaxation.loiez/Flickr
4 of 22
opalsson/Flickr
5 of 22
Jimmy B/Flickr
6 of 22
A cat with heterochromia, or two different colored irises.Jorge Barrios/Wikimedia Commons
7 of 22
Cat pupils can shrink when they are agitated.wibbles/Flickr
8 of 22
The cat first appears in painting and relief at the end of the Egyptian Old Kingdom, and this cosmetic jar is the earliest-known three-dimensional representation of the animal in Egyptian art.The Met Gallery
9 of 22
A cat's pupils can widen up to 135 times their size.ivva/Flickr
10 of 22
chrisyarzab/Flickr
11 of 22
Fabian Bolliger/Wikimedia Commons
12 of 22
A cat's eyes are a window to their wellbeing, and can also indicate larger medical problems. Glassy or leaky eyes can signal an underlying disease or irritation. Wikimedia Commons
13 of 22
Pexels
14 of 22
Cat's eyes appear as if they're glowing due to a reflective set of cells behind their retinas, which reflect light like a mirror.Greg Hume/Wikimedia Commons
15 of 22
Artist Nickolay Lamm consulted with ophthalmologists at the University of Pennsylvania's veterinary school and other animal eye specialists to create these visualizations comparing how cats see with how humans do. Humans represented on top; cat vision below. Nickolay Lamm/PopSci
16 of 22
Jennifer C./Flickr
17 of 22
The Cat's Eye Nebula, named for its distinctive resemblance to a cat's eye, was one of the first planetary nebulae discovered. NASA Remix Man/Flickr
18 of 22
Pathogenhk/Wikimedia Commons
19 of 22
The cat was sacred to the Egyptian goddess Bastet, and was offered in sanctuaries throughout Egypt. This cat sculpture has a narrow face but large deep-cut eyes for the addition of inlay. 664–30 B.C.The Met Gallery
20 of 22
Snapdragon66/Wikimedia Commons
21 of 22
Like nearly all terrestrial predators, cats have vertical pupils.Kevin Botto/Flickr
22 of 22 No doubt you've wondered how your dog or cat sees their world. Can cats see colors? Can cats really see in the dark? And why do cat eyes take on that otherworldly glow?

As it turns out, your cat's eyes look and operate the way they do to best suit their needs as a predator. Indeed, the size and shape of an animal's pupils actually reveals a whole lot about how they live.

But let's explore what makes a cat's eye, in particular, so singular.

Can Cats See In The Dark? 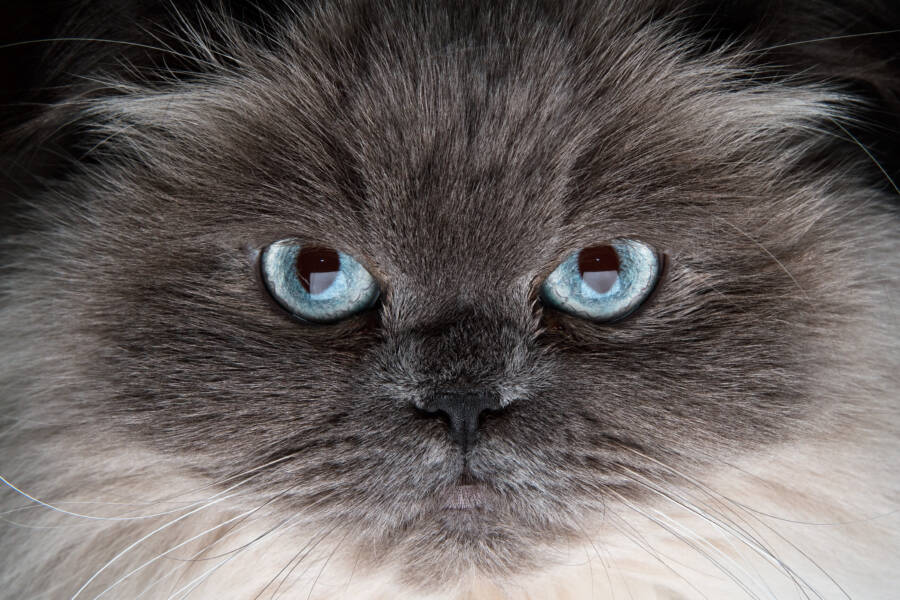 etremblay/FlickrYou've likely wondered why cat eyes glow in the dark, and it has to do with a strange layer of cells behind their retinas.

The pupil controls how much light passes through the eye and it operates pretty much just like the aperture of a camera. When light is plentiful, the pupil shrinks. When light is scarce, the pupil dilates. All animals' pupils do this to some extent.

But cat's eyes can do this much, much better than ours can. It's why they can see so well in the dark. Cat pupils are thin-slitted and vertical and they can expand much wider than our pupils can when light is scarce.

In fact, a cat's pupils can dilate enough to cover almost all of the iris and can expand up to 135 times its size. Compare this fact to human pupils, which can only dilate 15 times.

Therefore, cats can see much better in the dark than we can.

All animal eyes have cells in the retina called photoreceptors that process the light our pupils let in and synthesize it into a map for the brain to interpret as an image.

There are two kinds of photoreceptors: rods and cones. Rods pick up light while cones interpret colors. These cells then produce impulses that travel to the brain where they are deciphered into the images we see.

Cats have six to eight times more rod cells than we do, which is another reason they can see so much better in darker conditions.

But cat eyes have one more trick that helps them to see so well in the dark — and it's the reason why cat eyes glow.

Ever thought your cat's eyes looked so luminous that they were reflective? That's because they are. Behind your cat's eyes are specialized cells, called the tapetum lucidum, that reflect light outwards — much like light hitting a mirror. They thus can illuminate their own path like a pair of headlights on a car.

What Colors Can Cats See?

Cat eyes do not have as many cones as humans, so they don't see color as vividly as we do.

They likely see things in more pastel or muted tones, and only in certain colors at that. They see mostly in violet-blue and yellow hues, and they can see some greens. For the most part, however, cats are green/red colorblind. They are, though, very good at distinguishing between different shades of gray.

Nickolay LammHuman sight is represented on top. Below is a replica of what colors cats can see.

While cats can't see in bright colors like us, they do possess a wider field of vision than we do. Where humans can see around 180 degrees, cats observe around 200 degrees at a time. Their peripheral vision also encompasses a wider area than ours which is why they can pick up slight movements that would seem out of their line of vision.

Most predators will have eyes that are more in the center of their heads than on the sides, as is the case with cat eyes. Cats are also somewhat nearsighted in comparison to humans. We can see objects clearly at 100 to 200 feet, but cats can't see objects as sharply if they're more than 20 feet away.

You'll remember that cats have notably more rod cells than us and there's another plus to that — rod cells refresh quite quickly. This is why cat eyes are extremely sensitive to the movement of objects or prey. It may also be why a cat's pupils seem to dilate or constrict in, well, the blink of an eye.

Can Cats Communicate With Their Eyes?

Ever been jealous of your cat's luminous eyes? We have.

Like many animals, cats use their eyes to communicate. While they aren't as skilled at it as dogs or humans are (for one thing, cats don't have eyebrows), you can still learn quite a bit from the expression in the eyes.

Sometimes the communication is as simple as a blink. Try blinking at your cat; if they blink back at you, it's a sign of trust.

Half-closed or squinted eyes indicate relaxation, affection, and trust. If your cat looks like they're about to fall asleep, they are completely relaxed around you and trust you.

You may have heard that if a cat blinks slowly at you it is showing you affection — and that's true! But why is that? Because in the world of cats, being able to shrug off their guard and let their ever-vigilant eyes off duty is the ultimate sign of trust.

On the other hand, if a cat's pupils are dilated in the light of day, it can be a display of either surprise, excitement or fear. It can also indicate that the cat is experiencing pain. If the eyes themselves are in pain, this is usually accompanied by constricted pupils.

Speaking of severely constricted pupils, if you notice this, the cat is likely agitated or angry. If the cat's eyes are open wide but their pupils are like pinpricks, they may be preparing an attack on a perceived threat, so be careful!

Veterinarians say that systemic diseases can manifest through the eyes of your cat, too, so it's important to get them checked regularly. If you notice any changes in the appearance of your cats' eyes, consult your vet. 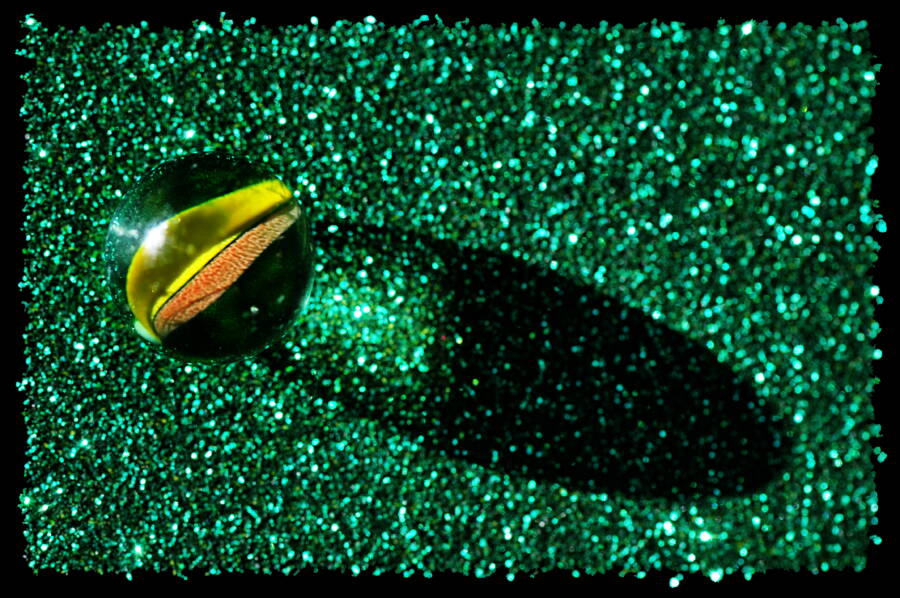 Beginning with Ancient Egypt, cats — and specifically their eyes — made a huge impact on culture and beliefs. Prominently featured in all kinds of artworks, the Egyptians worshipped cats and considered them sacred. Domestic cats were regarded as living incarnations of the deity Bastet.

When Cleopatra began to outline her eyes with thick, dark copper ore and malachite to mimic a cat, the look became instantly iconic.

Fast-forward to the 1950s when liquid eyeliner was invented, and cat-eye makeup became a worldwide phenomenon. Now pair the look with a catsuit and a pair of cat-eye glasses, and you've nearly covered the whole cultural guidebook to worshipping cats.

You can see homages to cat eyes everywhere. There are marbles named for them, as well as nebulas deep in the heart of space. There are reflective road safety devices that are fittingly dubbed "cat's eyes," and they feature prominently in movie titles.

It's easy to see how the incredible cat eye managed to capture the attention of the public, even if we weren't already obsessed with cats, to begin with.

Next, read about a cat named Dymka who has bionic paws. Then, take a virtual tour of this Greek island that's also a cat sanctuary.