Meet Dymka, The Bionic Cat Whose Frostbitten Paws Were Replaced With Titanium Ones

In the most devastating cases, feline frostbite injuries require amputation. But unlike most victims, Dymka the cat now has titanium prosthetics to help her walk around. 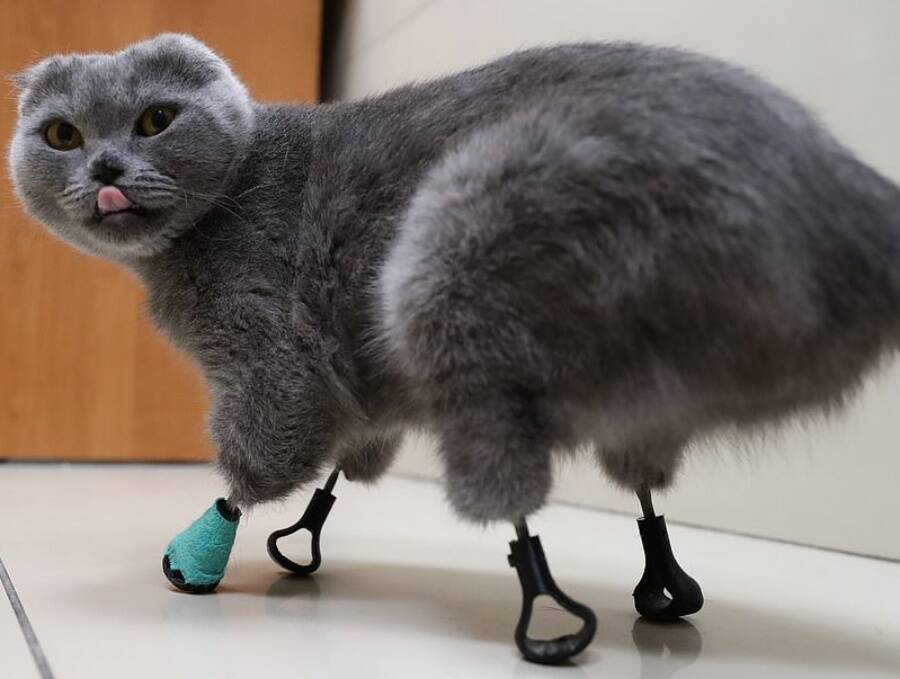 Kirill Kukhmer/TASSDymka is now the second cat in the world to receive prosthetic replacements for all four paws.

In October 2018, Russian veterinarian Sergei Gorshkov, who runs a clinic in the city of Novokuznetsk, received a visit from a woman who came across a stray cat during a drive.

The cat was in bad shape: She had been caught in the frigid Siberian weather for too long and as a result, suffered severe frostbite in multiple parts of her body. The doctors had to amputate her tail, both ears, and all her paws.

“There are two likely scenarios: Either she ran away or she fell out of the window,” Gorshkov said. “Unfortunately, frostbite in animals is a very real problem in Siberia.”

During the wintertime, a team of veterinarians at the Novosibirsk clinic typically treats five to seven cats brought in with frostbite. In the most devastating cases, frostbite injuries require amputation. But a year later, one particular cat is now pouncing around happily with the help of newly implanted titanium prosthetics.

As The Moscow Times reported, the grey cat, later named Dymka (“mist” in Russian), was fortunate to have landed at Gorshkov’s clinic. The veterinarian teamed up with engineers and researchers from the Tomsk Polytechnic University (TPU) to create special titanium-based prosthetics to replace Dymka’s lost paws.

Dymka has bounced back completely after her surgery in July 2019.

The team used computerized tomography, or CT, scans of Dymka’s legs to create a 3D model which was then printed out using a 3D printer. Thus, her custom-fitted titanium limbs were created.

To prevent infection and avoid the feline’s body rejecting her non-organic new limbs, they applied calcium phosphate at the ends of the titanium implants which allowed them to be easily fused into her leg bones through a process called micro-arc oxidation.

The “paw” parts of her implants were made to resemble the shape of real paws and are made out of a flexible material with textured bottoms which allows her to walk and jump around comfortably.

According to a statement released by TPU, Dymka’s procedure was carried out in two phases. The cat received her first set of titanium prosthetic paws for her front legs and then received her hind legs. Dymka’s manmade paws were inserted in a surgical procedure performed in July 2019. By December, Dymka had recovered from her surgery and had completely adjusted to them.

Dymka’s incredible progress was documented in a video published by Gorshkov’s clinic, the BEST Veterinary Clinic, and it shows just how well Dymka has taken to her new implants. She can be seen actively stalking around the clinic, pouncing on a toy rug, and even enjoying a good, long stretch as other able-bodied cats do. 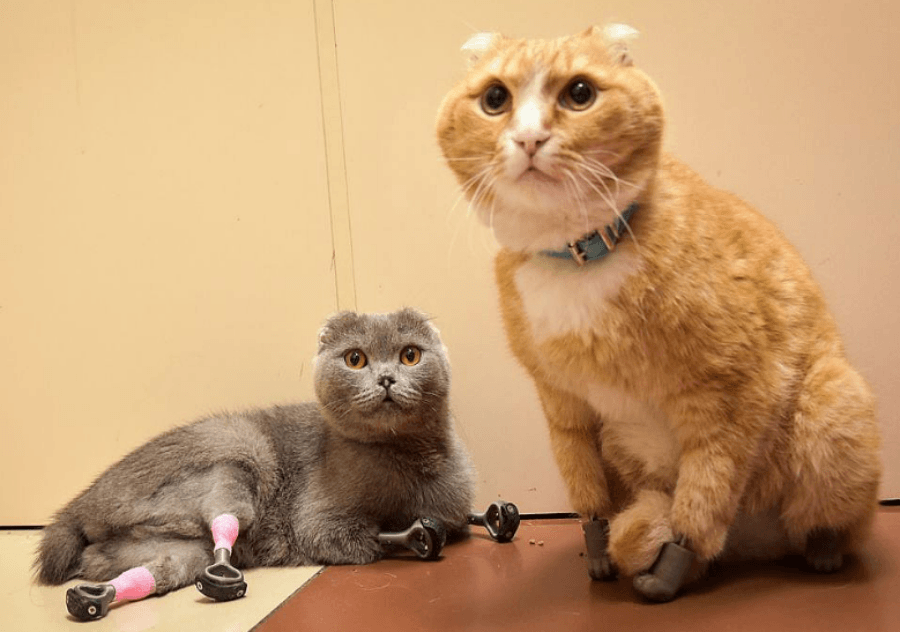 BEST Veterinarian Clinic
Dymka and Ryzhik are the only cats in the world with four prosthetic paws.

Incredibly, Dymka is not the first cat to receive prosthetics for all four paws. In 2016, the Novosibirsk clinic carried out a similar operation on a male cat named Ryzhik (which means “red” in Russian). Like Dymka, Ryzhik had suffered severe frostbite to all four of his paws and required amputation.

The two cats have both adjusted well to their new titanium paws and are living happily with their owners. Dymka, in fact, was adopted by the woman who had first rescued her from the harsh cold.

Not all cats are vulnerable to Siberia’s cold. A coven of Siberian cats live comfortably out in the snowy pastures on a farm in Prigorodny, Siberia, for example. The land is owned by a Russian farmer named Alla Lebedeva, who claims her farm is home to “a million, maybe more” Siberian cats who all live outside on the farm. There are three makeshift “bedrooms” inside Lebedeva’s henhouse where the cats can sleep if they choose, though they mostly gather outside.

But Siberian cats are a special breed. Their long, thick coats and strong bodies allow them to withstand the freezing temperatures while their agileness makes them savvy hunters. On Lebedeva’s farm, her Siberian cats double as pest control against mice and other rodents that might disrupt the farm’s ecosystem. And with her new paws, Dymka could surely make quick work of some small rodents if she had to as well.

Now that you’ve read Dymka’s incredible story, check out the Vatican cat massacre that may have contributed to the rise of the Black Death. Next, read about the cat owner who, reeling from grief, spent $35,000 to create China’s first cloned kitten.