Scientists hope to use the DNA from a 12,000-year-old extinct cave lion cub, preserved in ice, to bring this extinct species back to life. 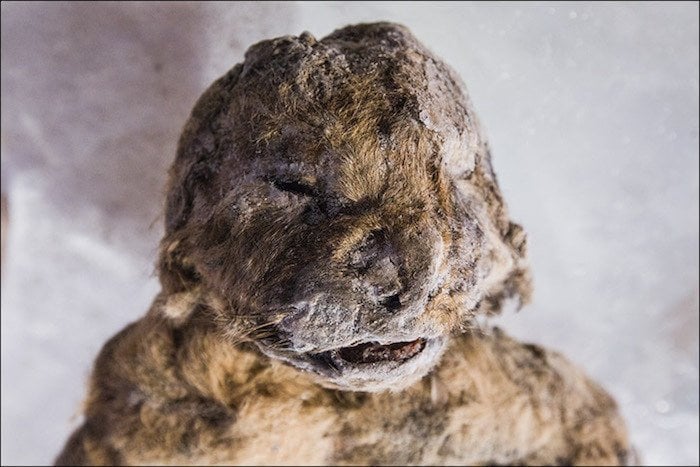 Scientists hope to clone an extinct species of cave lions from the DNA of a 12,000-year-old cub.

Whether you’re a fan of science fiction or not, the genre has a way of predicting the future. The Jetsons may have gotten flying cars wrong, but they did predict video phones. Back to the Future guessed at hoverboards that we definitely don’t have, but the film did predict today’s ubiquitous flatscreen TVs.

As for the Jurassic Park series, we haven’t brought previously extinct animals back to life yet, but that may be changing.

Last week, scientists from South Korea and Russia announced that they intend to clone an extinct cave lion using the DNA from two frozen 12,000-year-old cubs found in Russia last year. They will conduct their work at the Joint Foundation of Molecular Paleontology at North-Eastern Federal University, and so far the only thing getting in their way is finding usable DNA.

The two cubs were heralded as a major discovery when they were found in 2015.

The two Ice Age cubs were found in perfect condition in the Sakha Republic in Russia. Permafrost Siberian temperatures kept the baby animals in pristine research condition. When they were found, scientists chipped away at a mass of solid ice, hair and other material until a familiar feline face and body were exposed. The pair were named Uyan and Dina, and scientists estimated their age at the time of death to be around one or two weeks old.

The cave lions are the most intact Ice Age remains ever found, with fur, ears, soft tissue, and whiskers all easily identifiable. Doctor Albert Protopopov, a researcher with the Yakutian Academy of Sciences, attributed their preserved condition to the fact that they were likely covered by a landslide after their mother left the cave to go hunting.

Cave lions, though they’ve been extinct for over 10,000 years, aren’t far from modern lions in the genetic tree, and they weren’t much bigger either (the cubs were described as the “size of a plump house cat”). There’s even some evidence that early humans hunted them.

Uyan and Dina aren’t the first animals to be found in the Siberian wasteland, either. A 39,000-year-old baby woolly mammoth was found in 2013. Some even discussed cloning the mammoth, just as talk is now going around about cloning a cave lion.

One of the lion cubs will be dedicated to cloning, while the other will be kept in a museum. Meanwhile, researchers are making plans to hunt for more big cats that may have been preserved. Jurassic Park may come true after all.

Next, check out how with de-extinction scientists hope to bring the woolly mammoth and other species back to life.