Recent studies on the Cerne Abbas Giant suggest that it was first drawn in the Late Anglo-Saxon period, centuries earlier than previously thought. 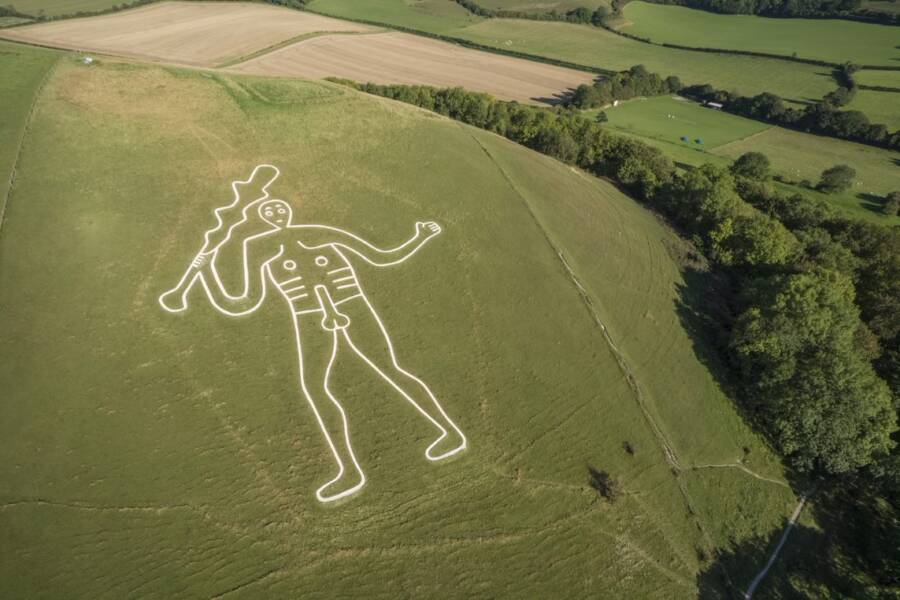 The hills of Dorset, England hold a giant mystery. There, someone at some point in history carved an enormous chalk figure of a naked man holding a club. Scientists are still puzzled about the why behind this drawing, but they believe they’ve answered the when.

Based on recent chalk samples, researchers now believe that the Cerne Abbas Giant dates back to the Late Saxon period, some 700 years older than previously thought.

Mike Allen, a geoarchaeologist at Allen Environmental Archaeology in Codford, U.K., who led the year-long study on the hillside carving, said the results were “not what was expected.”

The earliest known mentions of the Cerne Abbas Giant are from just 300 years ago, leading researchers to believe it was probably about that old. But according to Allen, “Everyone was wrong and that makes these results even more exciting.”

Because a notoriously meticulous English cartographer named John Norden made no mention of the giant during his study of the area in 1617, some people have long believed that it didn’t yet exist. But Allen suggested that the site was merely covered with long grass.

To determine the giant’s true age, Allen and his team took soil samples from its chalk outline as well as from the soil nearby. Then, using a technique called “optically stimulated luminescence,” they determined when their samples were last exposed to sunlight. 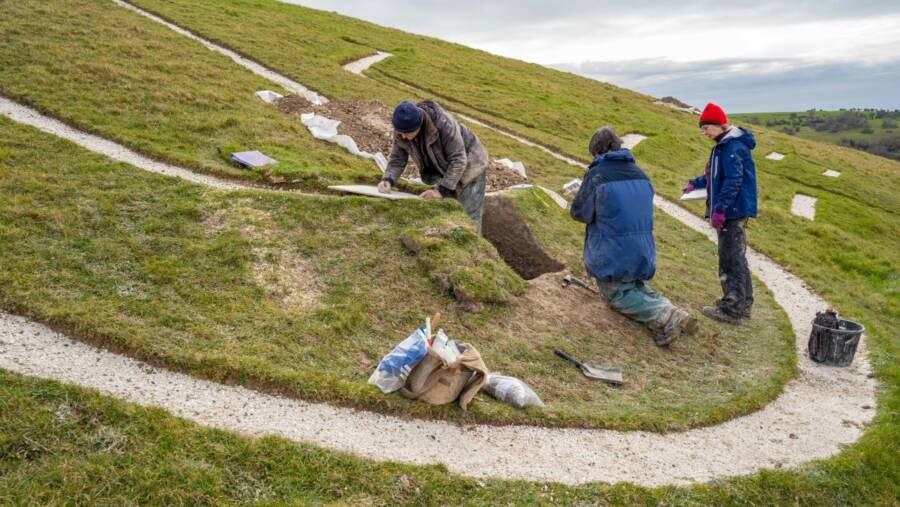 National TrustScientists at work along the giant’s massive outline.

They discovered that the oldest samples of chalk dated between 650 and 1310 A.D., and the soil around it dates to 700 to 1100 A.D. According to Allen, this means that the giant cannot be older than that, which puts the creation of it squarely in the latter part of the Saxon period which lasted from 410 to 1066 A.D.

This finding is significant becase for years, the origins of the Cerne Abbas Giant have stumped historians. “Many archaeologists and historians thought he was prehistoric or post-medieval, but not medieval,” noted Allen.

Those who believed that the giant was truly ancient thought that it could be a fertility aid, but these new findings contradict that.

“The archaeology on the hillside was surprisingly deep – people have been re-chalking the giant over a long period of time,” noted National Trust senior archaeologist Martin Papworth.

“The deepest sample from his elbows and feet tells us he could not have been made before 700 A.D., ruling out theories that he is of prehistoric or Roman origin.” 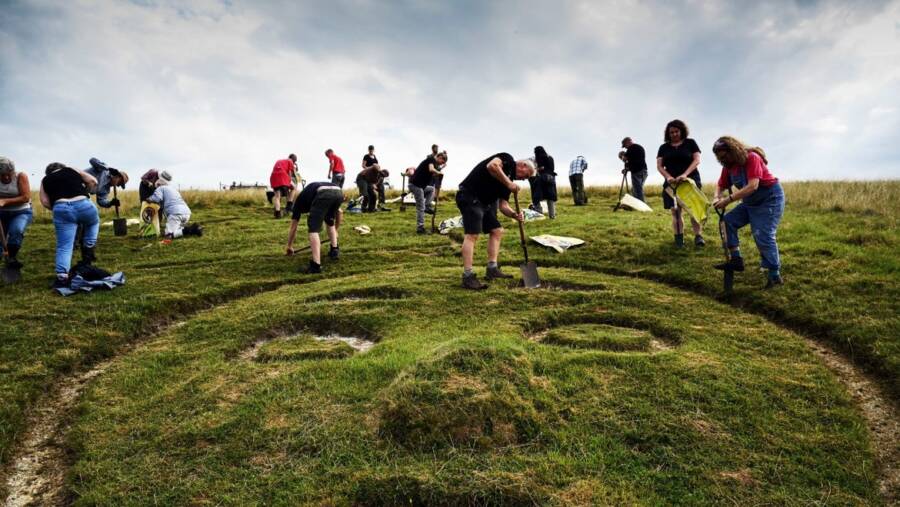 National TrustVolunteers restored the chalk on the Cerne Abbas Giant in 2019.

However, since the earliest known mention of the giant comes from church records in 1694, some historians long wondered if the Cerne Abbas Giant could have been a mockery of Oliver Cromwell.

Cromwell was a brutal leader who ruled England between 1653 and 1658. He remains a controversial figure in English history. The Telegraph suggested that the giant was a caricature of him “with the club a reference to repressive rule and the phallus a mockery of his puritanism.”

But now that historians are more certain about the age of the Cerne Abbas Giant, they have new theories about why someone created it.

Allen noted that a Benedictine monastery was founded in Cerne Abbas in the late 10th century. He suspected that the naked giant might have been in response to that.

“Some sources think the abbey was set up to convert the locals from the worship of an early Anglo-Saxon god known as Heil or Helith,” agreed Papworth. “The early part of our date range does invite the question, was the giant originally a depiction of that god?” 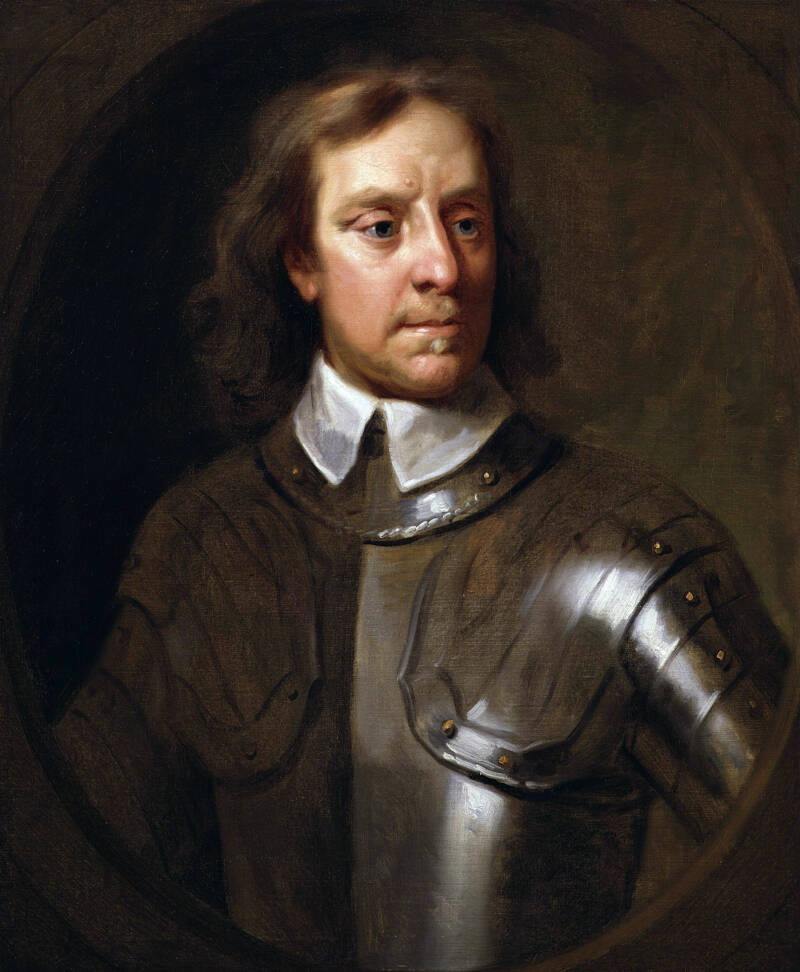 Wikimedia CommonsSome believed the giant was a mockery of Oliver Cromwell.

Allison Sheridan, a freelance archeological consultant in Edinburgh, also believed that the creation of the giant likely had something to do with the new abbey. “It would almost seem to be an act of resistance by local people to create this fantastically rude pagan image on the hillside,” she said. “It’s like a big two fingers to the abbey.”

With one question solved, researchers and locals alike are eager to see what more they can learn from the Cerne Abbas Giant.

Gordon Bishop, the Chair of the Cerne Historical Society, called the most recent findings “intriguing as well as surprising.”

“What I am personally pleased about is that the results appear to have put an end to the theory that he was created in the 17th century as an insult to Oliver Cromwell,” Bishop said. “I thought that rather demeaned the giant.”

After reading about the Cerne Abbas Giant, check out this 400-year-old pottery discovered on Roanoke Island. Or, learn about the relics of the largest child sacrifice ever found.