An aerialist in the circus at the turn of the 20th century, Maud Wagner broke barriers by both giving and receiving hundreds of tattoos.

At the St. Louis World’s Fair in 1904, an aerialist named Maud Wagner struck a deal with a tattoo artist. She would go on a date with him — if he taught her how to tattoo. Thus began the two most important love affairs of Wagner’s life: the tattoo artist and tattoos themselves.

Not only did Wagner marry the tattoo artist, but she also covered her body in ink — just like him. Her pale skin suddenly blossomed with colorful depictions of lions and butterflies and trees. Magnificent illustrations stretched across her chest, up to her collarbone, and all over her arms.

But Wagner was more than just a canvas for other people’s art. She learned the arduous “hokey-pokey” tattooing method from her husband and began to create artistic designs of her own. 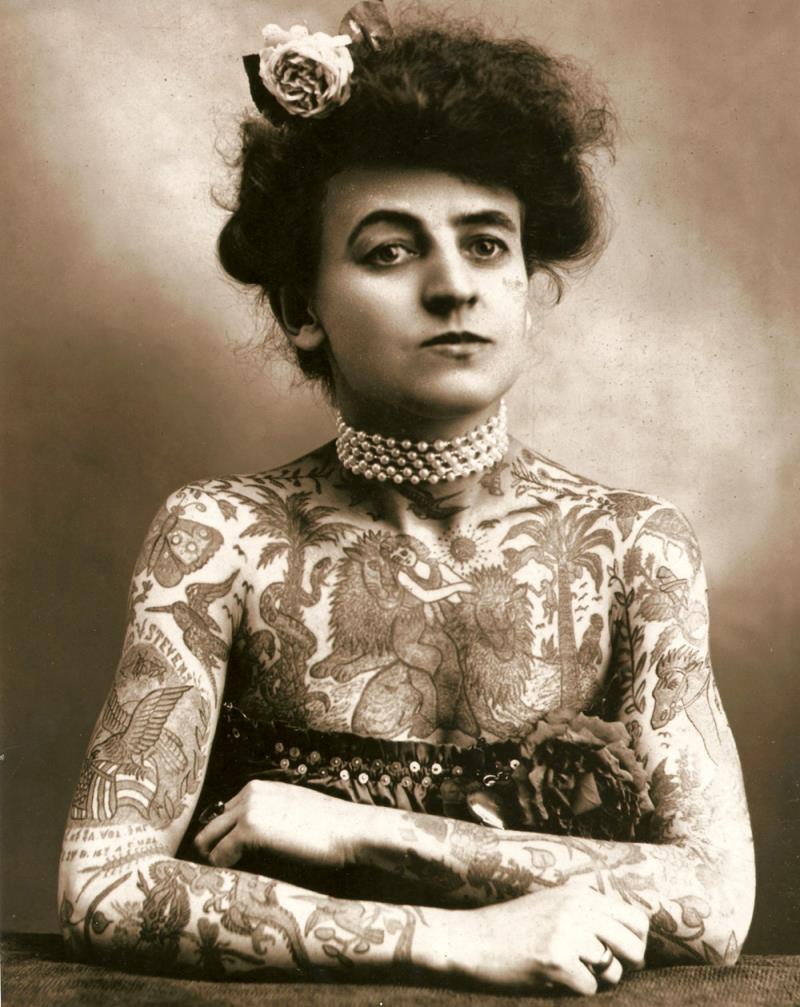 Wikimedia Commons Maud Wagner displays some of her many tattoos in the early 20th century.

Her skill made her the first female tattoo artist in the United States — as well as an emblem of self-determination when women had few rights.

This is her colorful story.

Listen above to the History Uncovered podcast, episode 19: Maud Wagner, also available on Apple and Spotify.

Maud Wagner And The Needle 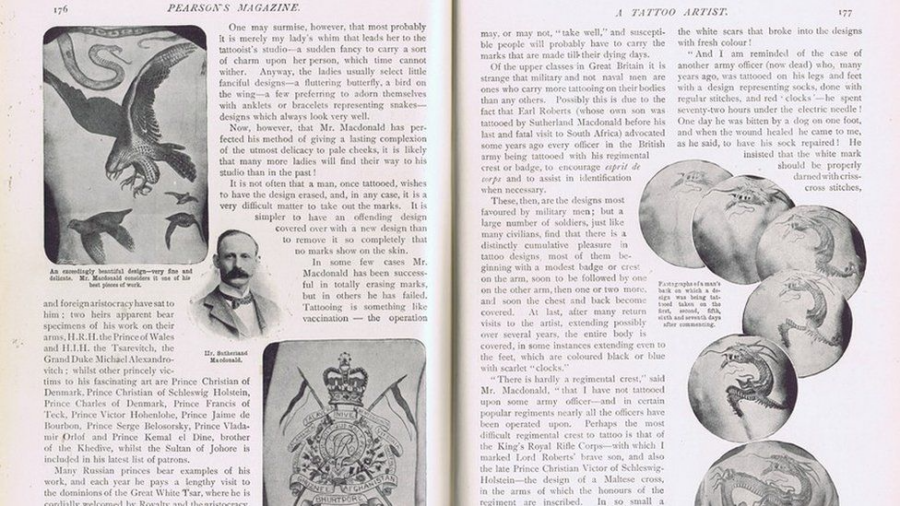 Maud Wagner, neé Stevens, was born on February 12, 1877, in Emporia, Kansas to David Van Buran Stevens and Sarah Jane McGee. Little is known about Wagner’s early life. But for some reason, she drifted toward the world of traveling circuses, where she would become an aerialist and contortionist.

Wagner would have encountered few openly displayed tattoos in her youth. But tattoos were a popular — if hidden — fad among the upper classes at the end of the 19th century. Even Winston Churchill’s mother had a tattoo (of a snake eating its tail). And in 1897, The New York World guessed that some 75 percent of American society women had tattoos.

Victorian-era women who could afford it would have gotten small tattoos, easily hidden beneath the long sleeves and high collars of their day. But the trend was waning. Tattoos, snipped one socialite in 1920, were suitable “for an illiterate seaman but hardly for an aristocrat.”

It was a different story in the circus. 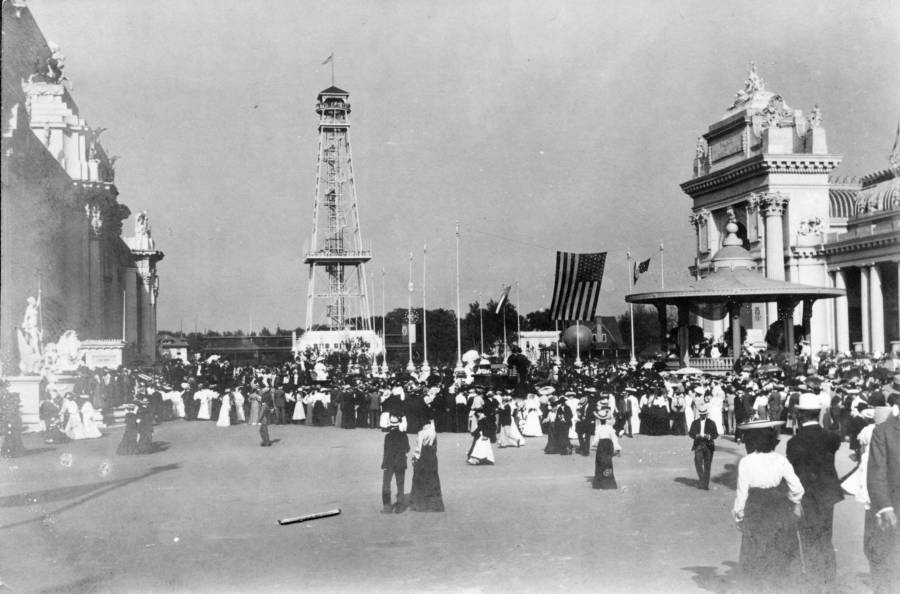 Gus stood out even among other circus folks. Known as “The Tattooed Globetrotter,” Gus had nearly 300 tattoos. He claimed to be the “most artistically marked-up man in America.” Over the course of his life, Gus Wagner would collect some 800 tattoos across his entire body. 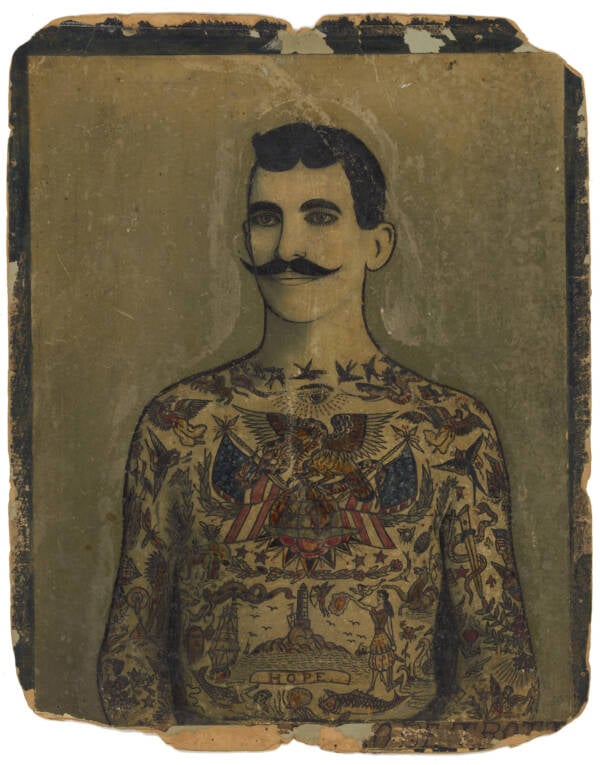 The Alan Govenar and Kaleta Doolin Tattoo Collection/Courtesy of The Seaport MuseumGus Wagner’s impressive collection of tattoos, as depicted in a self portrait.

He regaled Maud with stories of his adventures on the high seas. Gus described how he had seen his first tattooed man at the age of 12 — “Captain Costentenus the Greek Albanian” at a traveling show — and how he had learned hand-tattooing techniques from tribes in Java and Borneo.

Although a man named Samuel O’Reilly had invented and patented the first electric tattoo machine in 1891, Gus apparently chose to continue with the simpler and more arduous stick-and-poke method.

Maud was intrigued. As the story goes, she agreed to go on a date with Gus if he would teach her how to give tattoos. 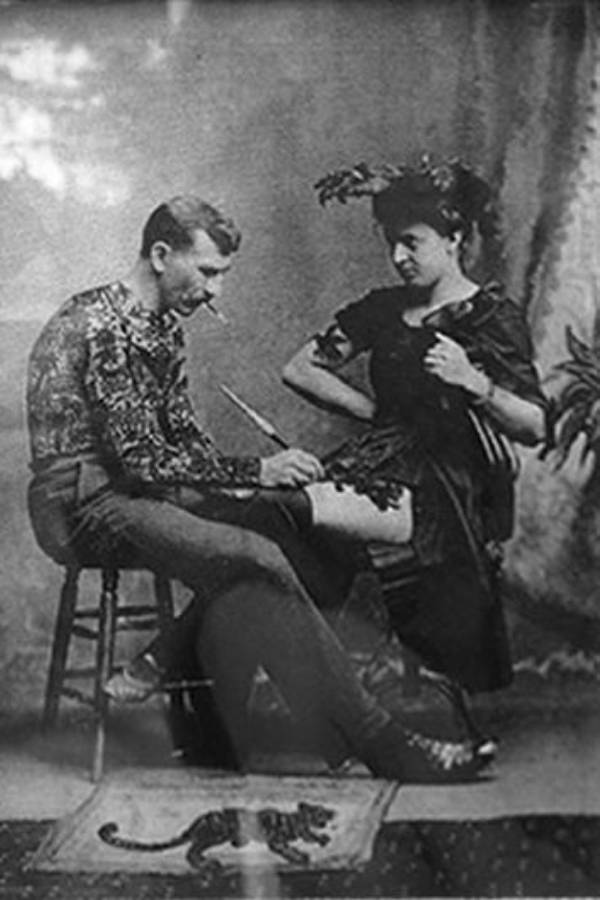 A deal was struck — and Maud fell in love with both the man and the needle. They married some months later on October 3, 1904, and they soon welcomed a daughter named Lotteva.

Before long, Maud began to grow a collection of tattoos all her own.

The First Female Tattoo Artist In The United States 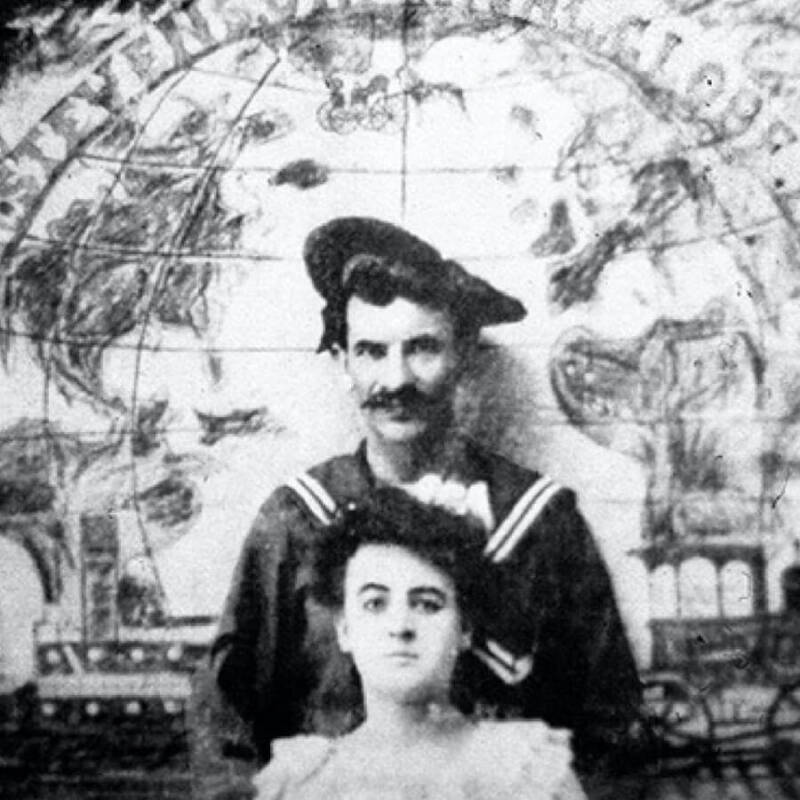 Maud Wagner’s tattoos were typical of the period. She had patriotic tattoos and designs of animals like monkeys, snakes, and horses. And she also had her own name inked on her left arm.

But there was nothing typical about Wagner.

She and her husband were covered in tattoos and became popular circus attractions because of it. They might have earned as much as $200 a week (about $2,000 today) just for displaying their inked skin to the public.

However, the flare of tattoo popularity at the end of the 19th century had faded. Newspapers had begun to drum the warning that tattoos could spread venereal diseases. And tattoo artists could be hard to find — people couldn’t just waltz into a tattoo parlor like they do today. By 1936, LIFE Magazine estimated that only 6 percent of the American public had tattoos.

But if you wanted a tattoo, Gus and Maud Wagner could help. The couple gave tattoos — to both their circus colleagues and curious audience members — inking as many as 1,900 people over just a few months.

In an interview with the Dallas Morning News, their daughter Lotteva recalled that most of her parents’ customers wanted “tattoos of their pet dogs, cats, lovers’ hearts, butterflies, and birds. How they do love birds.” 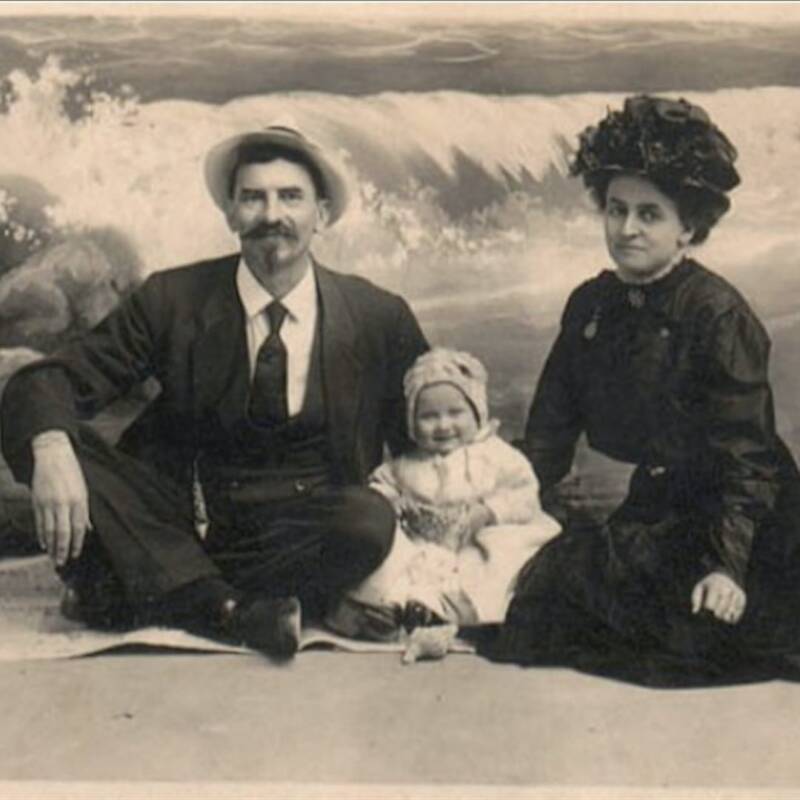 Gus and Maud WagnerThe Wagner family looked perfectly “normal” when they covered up their tattoos.

Their tattoo work could be so lucrative, she added, that “my father probably earned as much as a bank president at the fair.”

But she and Gus could blend in when they wanted to — the conservative clothing popular in the early 20th century effectively masked their colorful skin. Even so, their neighbors in Kansas still told stories about the “circus freaks” next door to scare their children straight.

Their daughter carried on their tradition. Although she never got tattoos herself — apparently, Maud forbade Gus from tattooing their daughter — Lotteva started tattooing others when she was just nine years old.

“Mama wouldn’t let Papa tattoo me,” Lotteva said. “I never understood why. She relented after he died and said I could get tattoos then, but I said that if Papa couldn’t do them like he had done hers, then nobody would.” 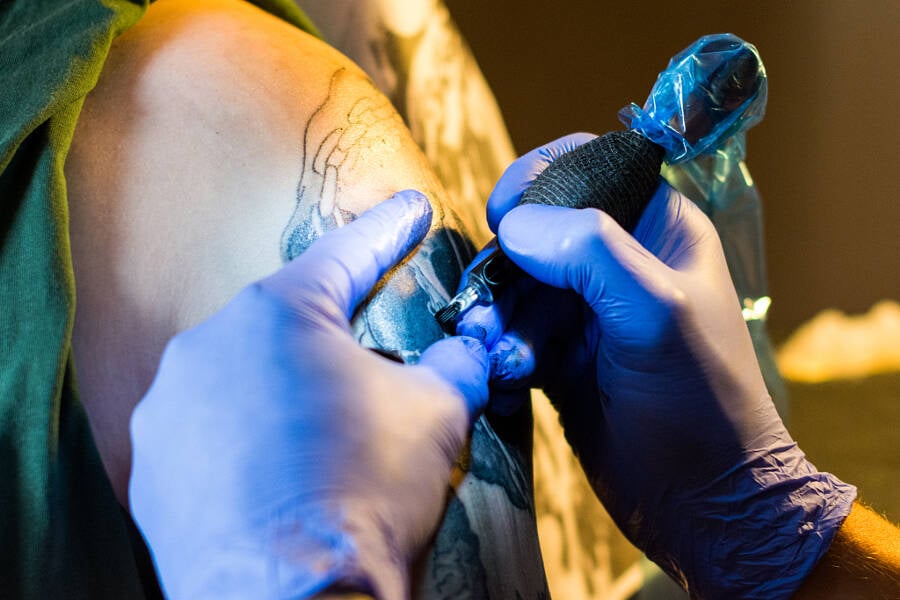 Wikimedia CommonsFor the most part, tattoos are no longer considered a social taboo in American society today.

Maud Wagner would have stood out in her time. Today, she wouldn’t attract much attention walking down the streets of Los Angeles or Brooklyn.

But Maud Wagner broke some important barriers in the early 20th century. Not only did she become the first female tattoo artist in the United States, but she also covered her own skin with tattoos — taking ownership of her body in a time when American women couldn’t even vote.

In this way, Maud Wagner is also part of a larger trend involving women and tattoos. American women in modern times are actually more likely than men to have ink (23 percent versus 19 percent, according to a 2012 poll). And there may be a reason for that.

In the book Bodies of Subversion: A Secret History of Women and Tattoos, Margot Mifflin argues that feminism and tattoos are linked.

“Tattoos appeal to contemporary women both as emblems of empowerment [and] self-determination,” Mifflin wrote. Especially at a time “when controversies about abortion rights, date rape, and sexual harassment have made [women] think hard about who controls their bodies — and why.”

Women today have also used tattoos as a way to regain control over their bodies after mastectomies. And in some cases, they can actually bill such tattoos to their insurance companies.

Since Wagner was such a trailblazer in the world of tattoos, there’s no doubt that she helped pave the way for modern women to take these leaps.

By taking ownership of her body, Maud Wagner was a woman before her time — a circus performer and an artist whose greatest creation was displayed on her own skin.

After reading about Maud Wagner, take a look at these fascinating tattoo facts. Then, check out these photos of vintage tattoos.