Explore The North Pole With These 21 Fascinating Arctic Animals

From the adorable to the ferocious, these unique arctic animals rule Earth's snow and ice.

The Arctic is a mysterious world of ice and snow, much of it still seldom explored and thus home to creatures that remain relatively enigmatic. It may seem like not much can survive in these freezing temperatures, but life is abundant.

Here are 21 of the most incredible Arctic animals you’ll ever see, with one fascinating fact for each: 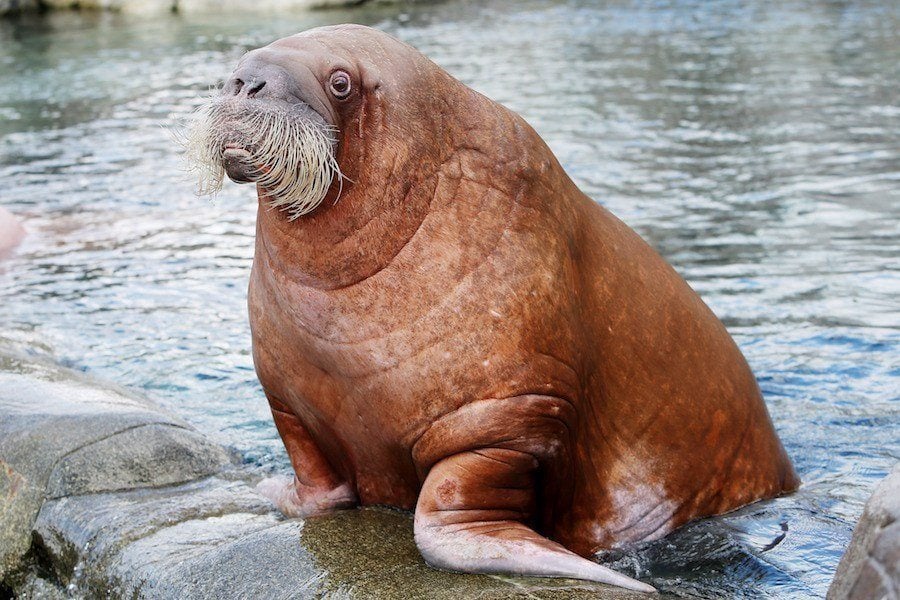 The walrus uses its whiskers to detect shellfish, like clams, all the way down the ocean floor. It can eat up to 4,000 clams in one sitting. MALTE CHRISTIANS/AFP/Getty Images 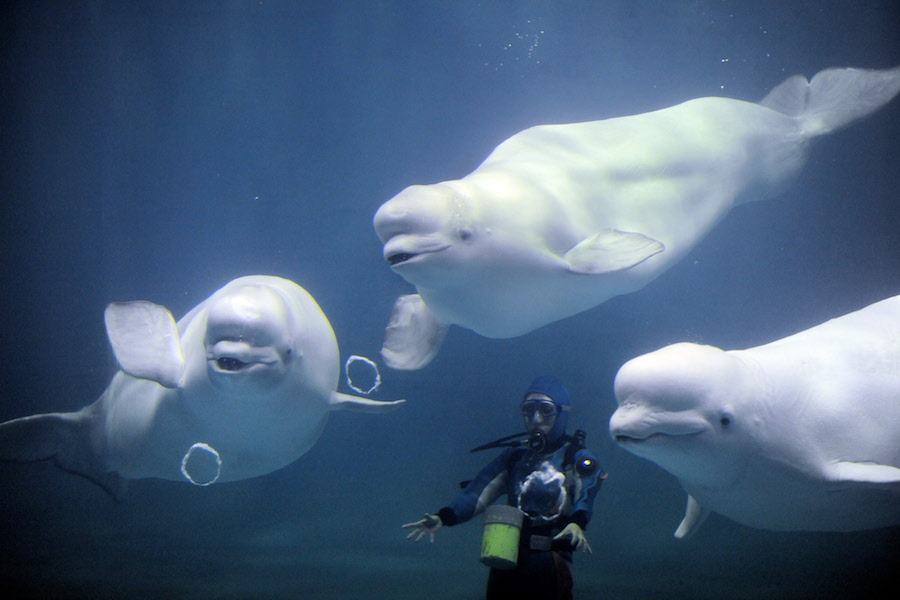 Beluga whales use complex musical calls to communicate underwater, earning them the nickname the "canary of the sea."Kazuhio Nogi/AFP/Getty Images 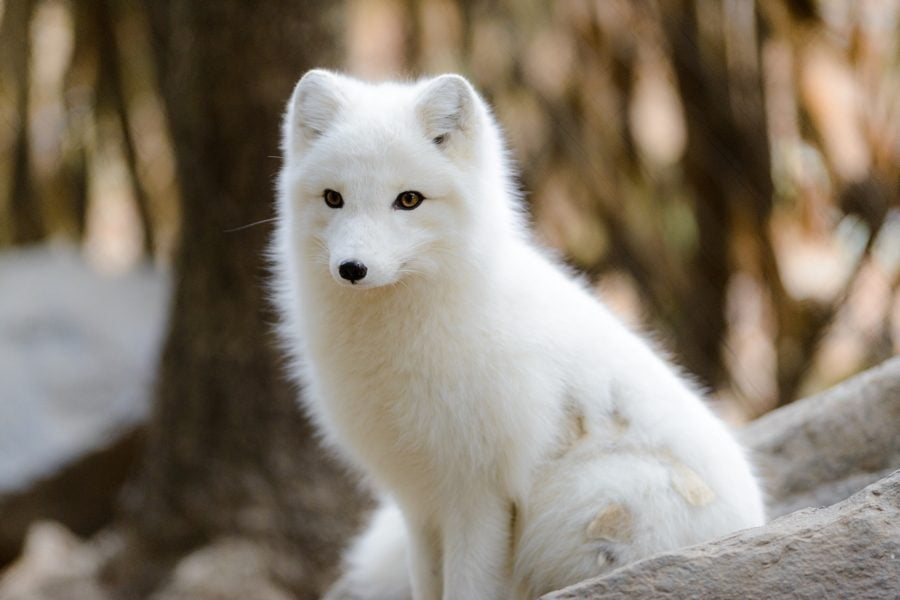 Arctic foxes must penetrate layers of snow to find food, diving headfirst into the snow to burrow for prey.Eric Kilby/Flickr 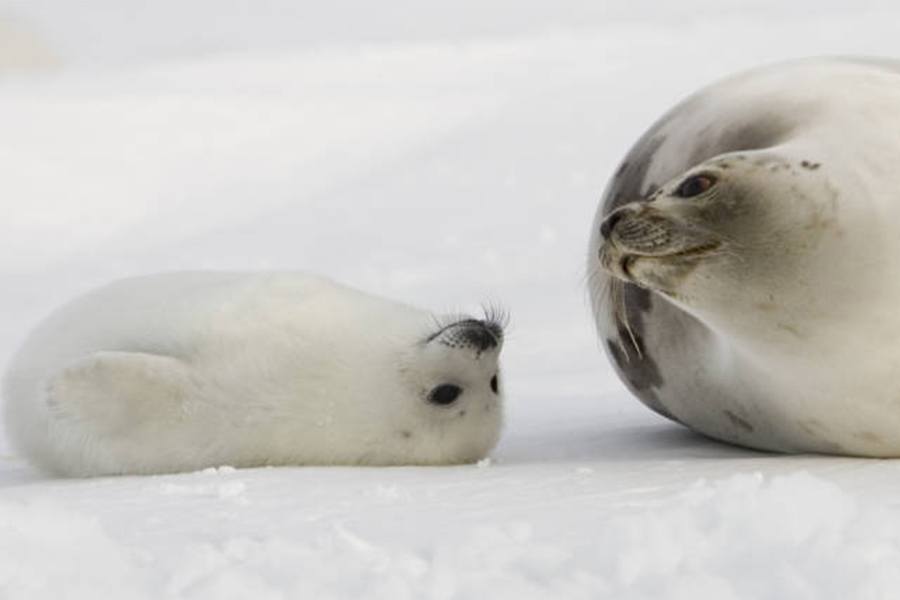 A mother harp seal can distinguish her pup from hundreds of others based on smell alone. David Boily/AFP/Getty Images 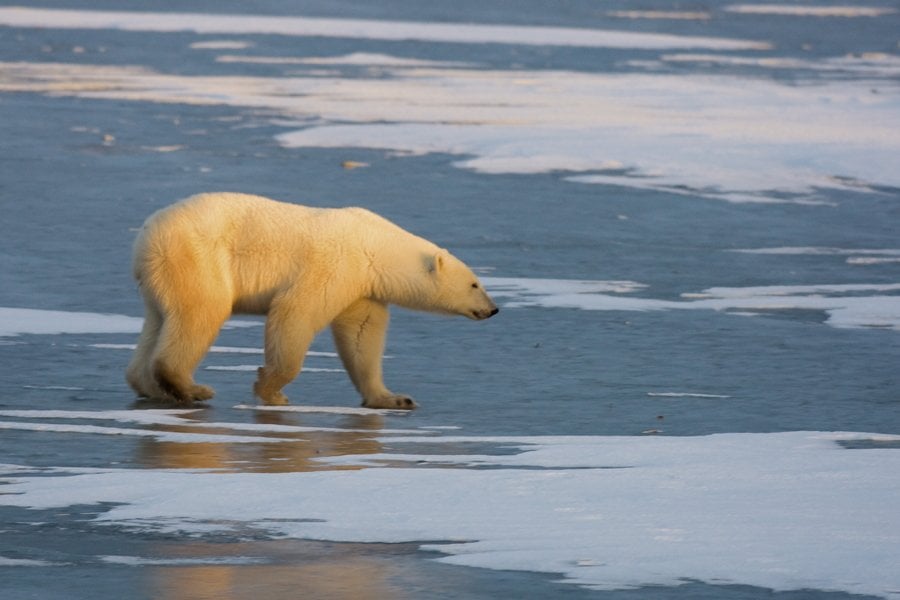 Though polar bears appear to be white, their fur is actually pigment-free and transparent. Its hollow core merely reflects the largely white light around them. Underneath their fur, their skin is black.PAUL J. RICHARDS/AFP/Getty Images 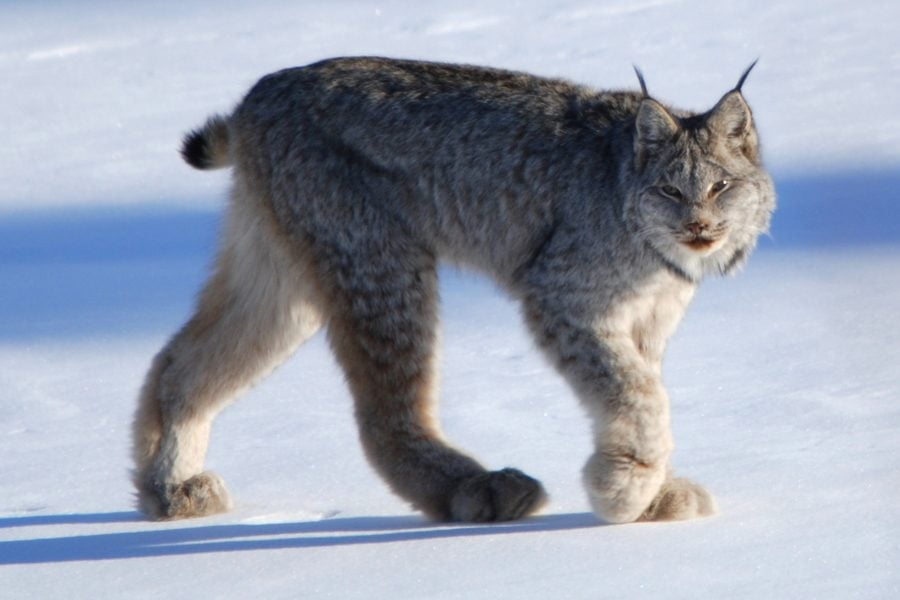 Although these expert hunters, about twice the size of a house cat, subsist almost exclusively on one type of prey (the snowshoe hare), they can take down prey as large as a young reindeer.Wikimedia Commons 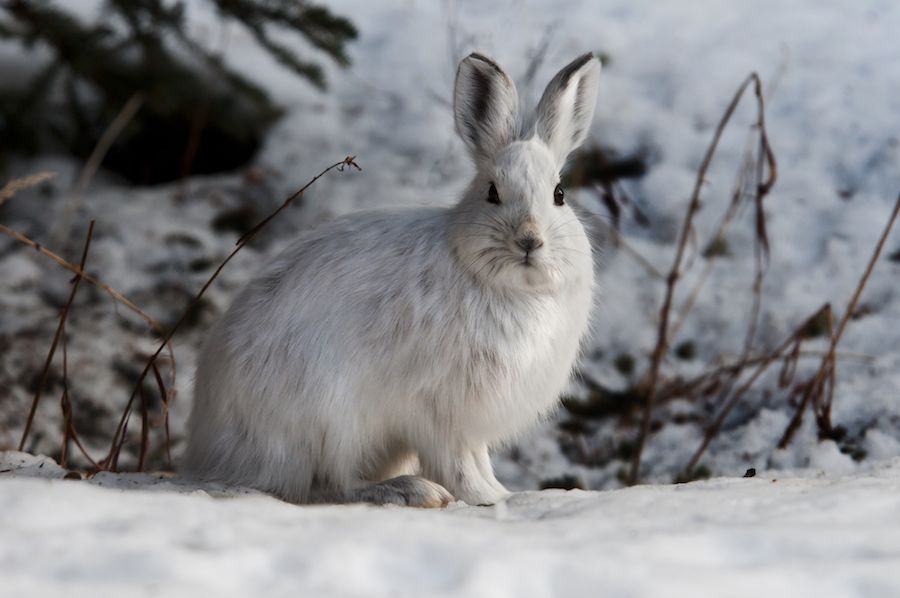 This rabbit's large hind feet work like snowshoes, preventing it from sinking into deep snow.Wikimedia Commons 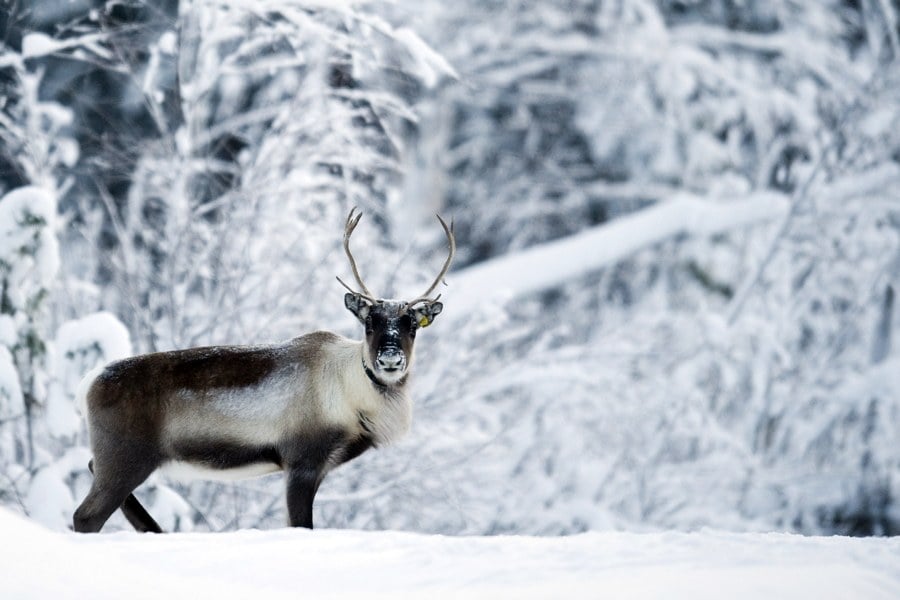 Unlike all other kinds of deer, both male and female reindeer grow antlers.JONATHAN NACKSTRAND/AFP/Getty Images 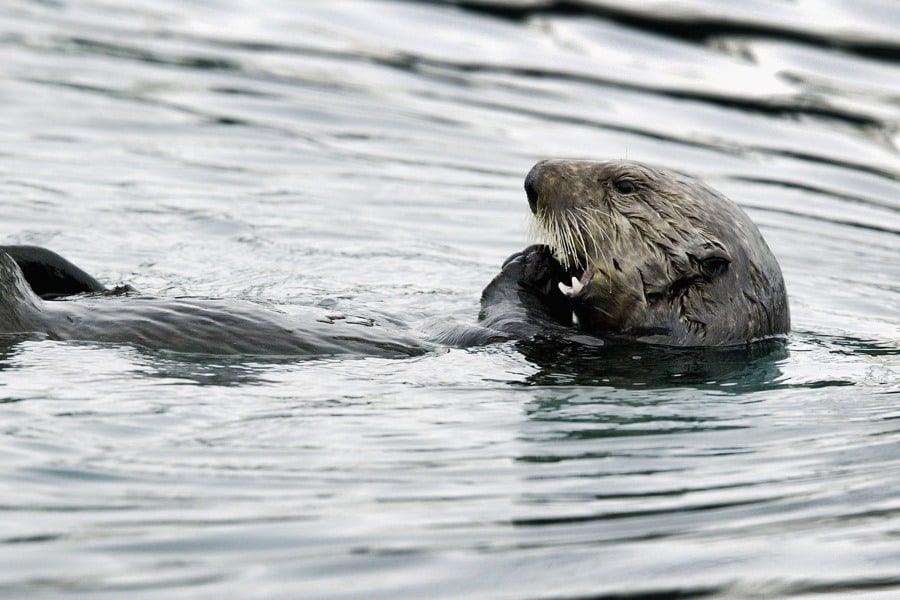 To counteract heat loss caused by its cold water environment, sea otters have to eat as much as a third of their own body weight in food each day. David McNew/Getty Images 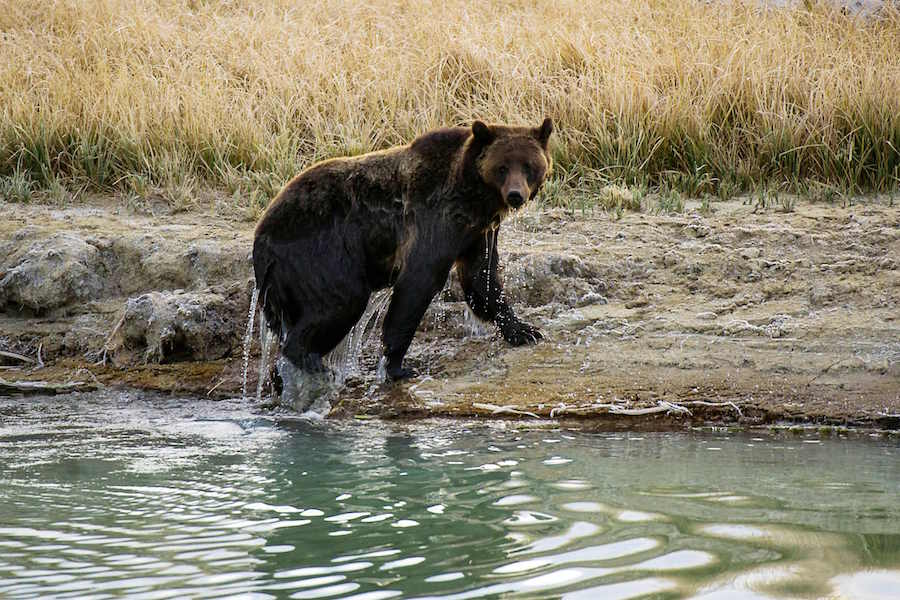 Although this creature's scientific name (Ursus horribilis) literally means "terrifying bear," it isn't quite the killer you might expect. In fact, some estimates say that as much as 80-90 percent of its diet is made up not of meat, but plants, fruits, nuts, and roots.Karen Bleier/AFP/GettyImages 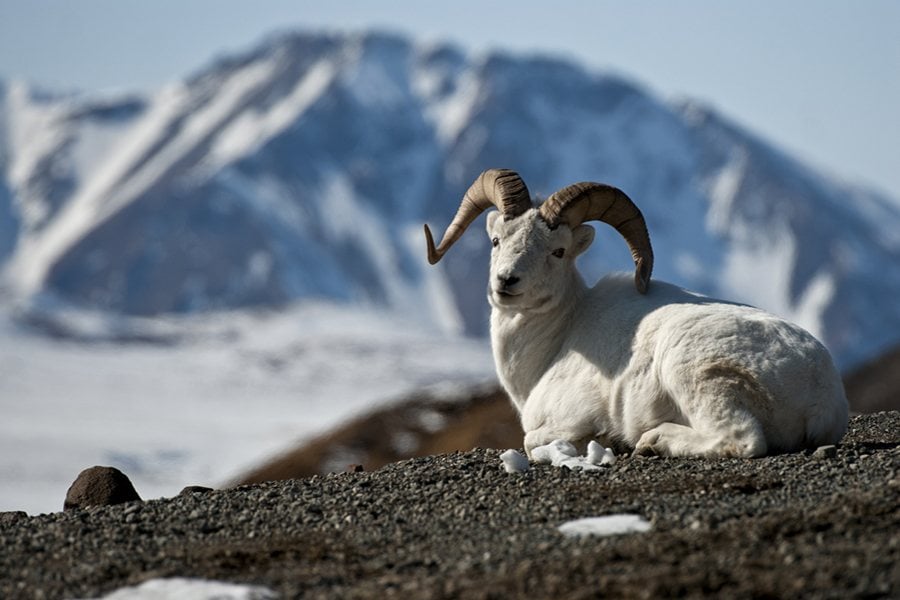 The male dall sheep's incredible horns, made of the same material as your fingernails, take as long as eight years to reach their full length of two-and-a-half feet.Wikimedia Commons 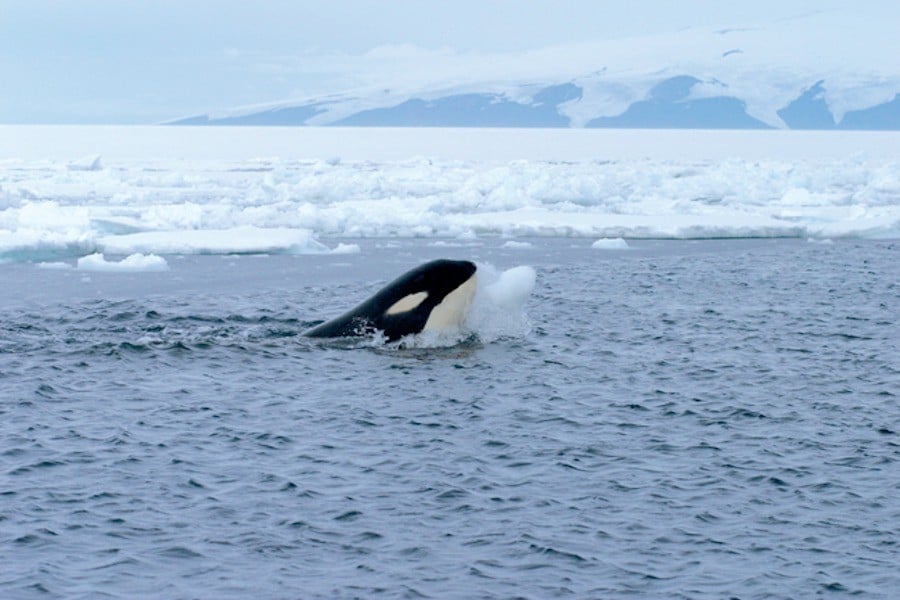 Killer whales are incredibly social animals, often working together to catch a meal. They've been recorded creating huge waves in the Arctic Ocean in order to knock seals off ice floes and into the water where they can be eaten. Wikimedia Commons 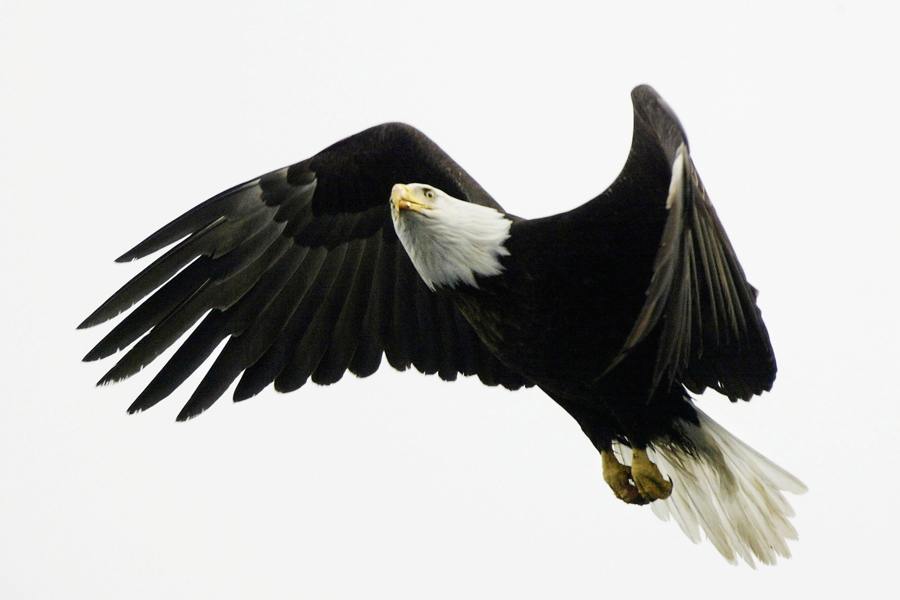 When diving down through the air and toward the water for prey, these powerful creatures can travel at speeds of up to 100 miles per hour.David McNew/Getty Images 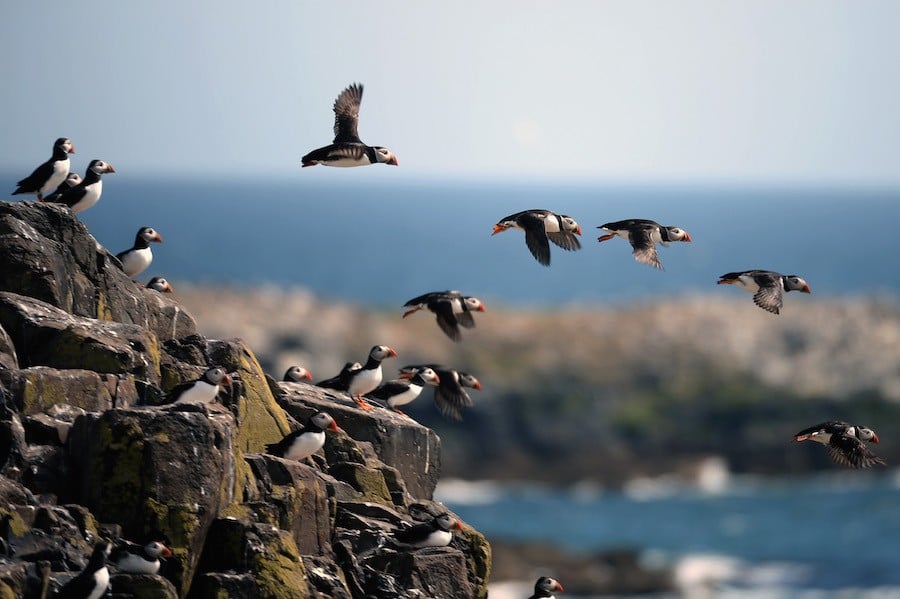 Puffins make amazing partners: They lay one egg per year with the same mate and take turns with domestic duties, like incubating the egg.Jeff J Mitchell/Getty Images 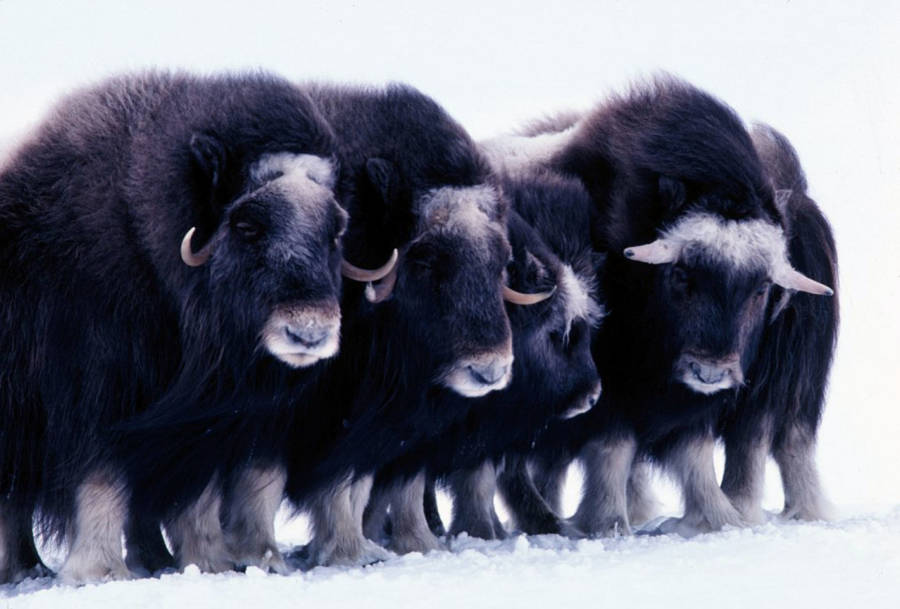 If a muskox calf is threatened by a predator such as a wolf, the herd will form a circle around the calf in defense. Sometimes mature muskoxen will even scoop up an approaching wolf with its horns and throw it to the ground. US Fish and Wildlife Service/Getty Images 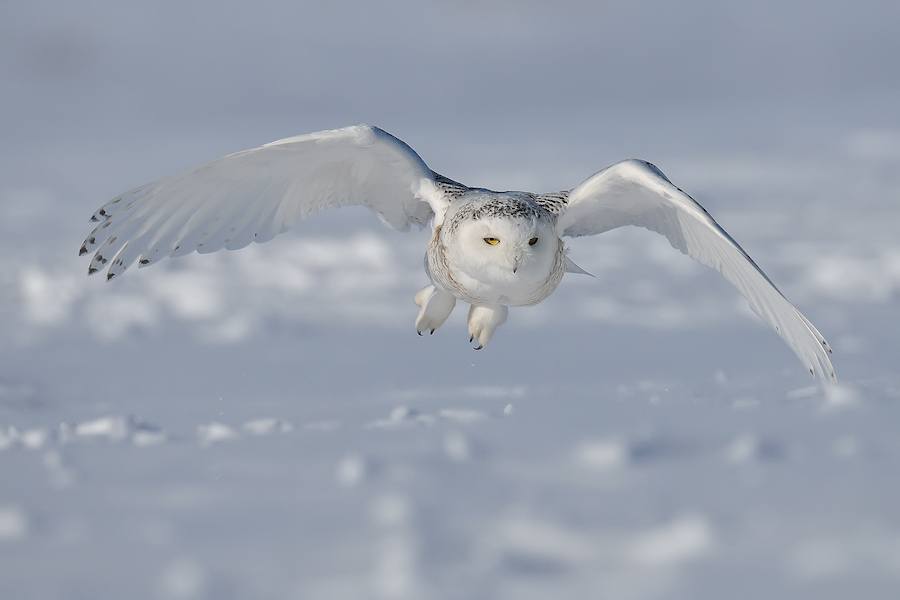 Unlike most other owls, the snowy owl is diurnal, meaning it hunts during both night and day. Wikimedia Commons 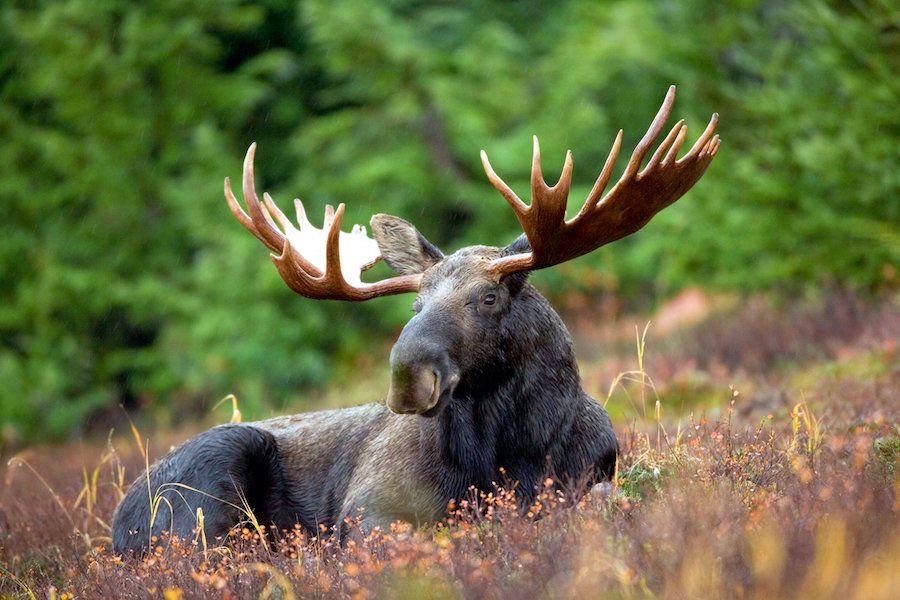 Although a moose's enormous antlers can weigh as much as 40 pounds, these hefty adornments are not at all permanent. Instead, a moose will shed its antlers and grow them anew as often as once per year.Wikimedia Commons 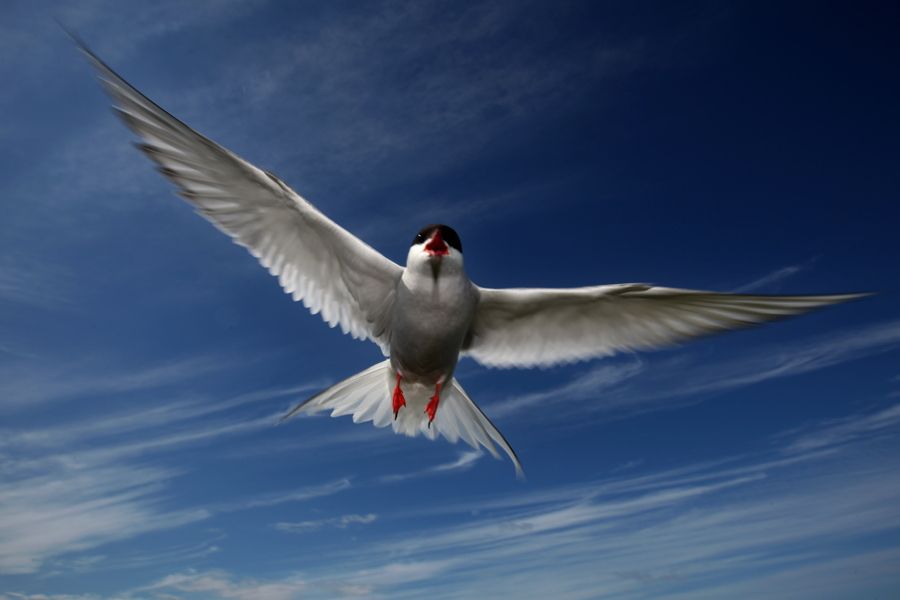 Every year, the Arctic tern migrates from the Arctic to the Antarctica. That's a 25,000 mile trip — one way.Dan Kitwood/Getty Images 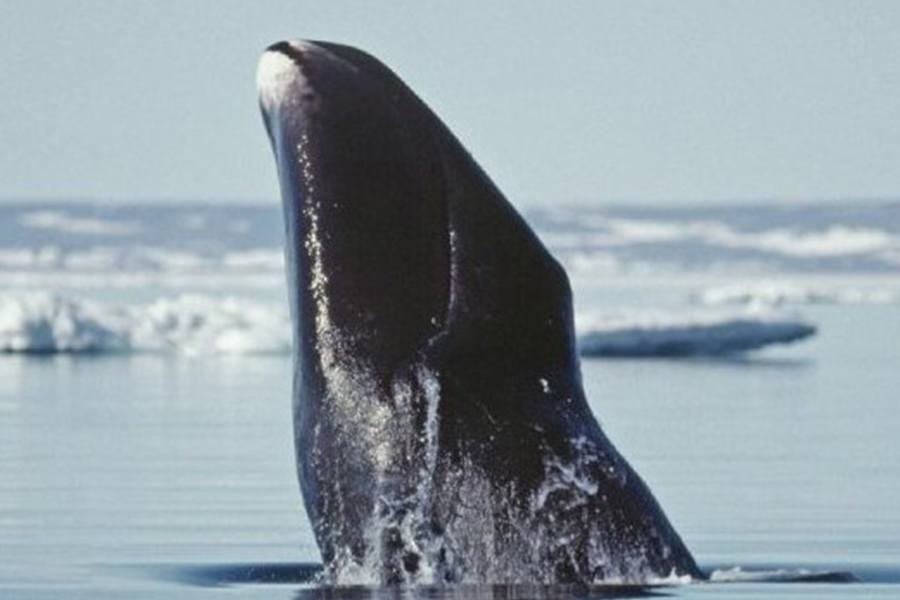 Unlike many other species of whales, the bowhead whale does not migrate to warmer waters in the winter, but rather stays in Arctic waters all year round. They're able to do so largely because of their 20-inch layer of blubber, the thickest of any animal on Earth.Day Donaldson/Flickr 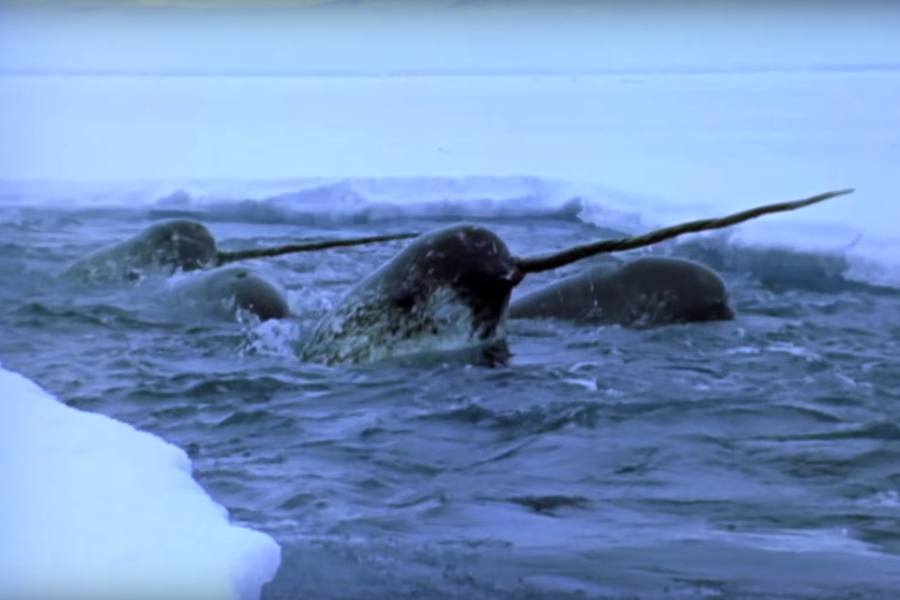 The narwhal's distinctive tusk is actually an elongated tooth that can reach lengths of ten feet and is packed with millions of nerve endings. When two narwhals rub their tusks together, scientists now hypothesize they're communicating important information about the waters each have traveled through.Nat Geo Wild/YouTube 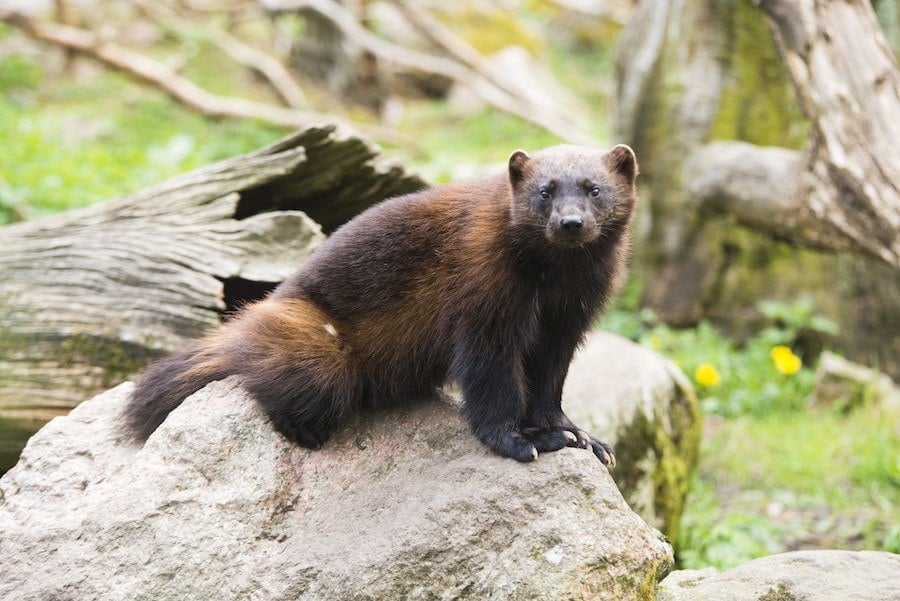 These small yet surprisingly fearsome carnivores are both intimidating hunters (with reported takedowns of far lager animals including caribou and elk) and relentless scavengers that can smell an animal carcass buried under as much as 20 feet of snow.Wikimedia Commons

After seeing these stunning arctic animals, check out these mesmerizing photos and facts from Antartica. Then, find out more about the weirdest animals around the world.