From turtles and snakes to cows and pigs, two-headed animals are not only astounding but perhaps not quite as rare as you might think. 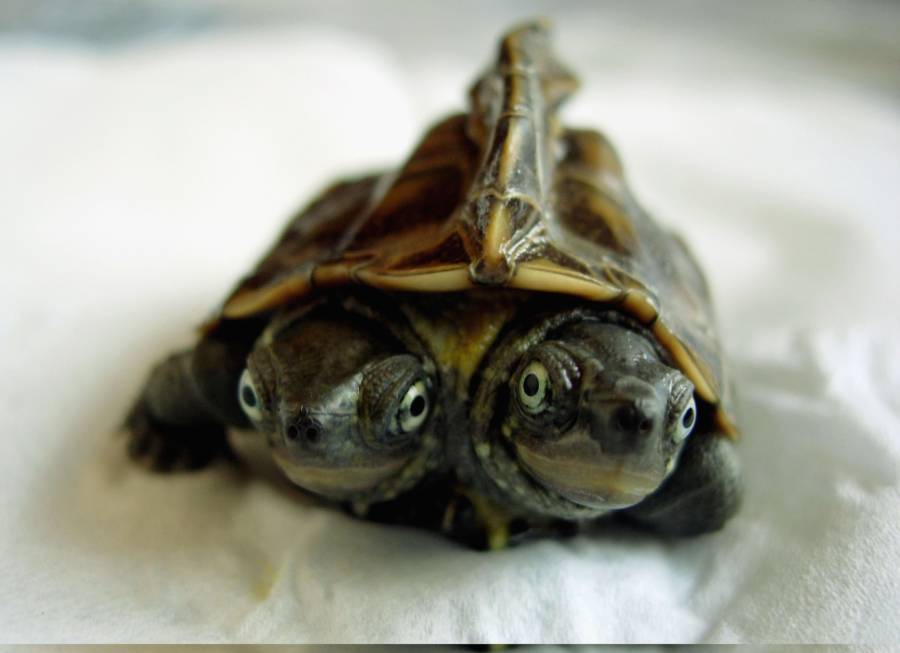 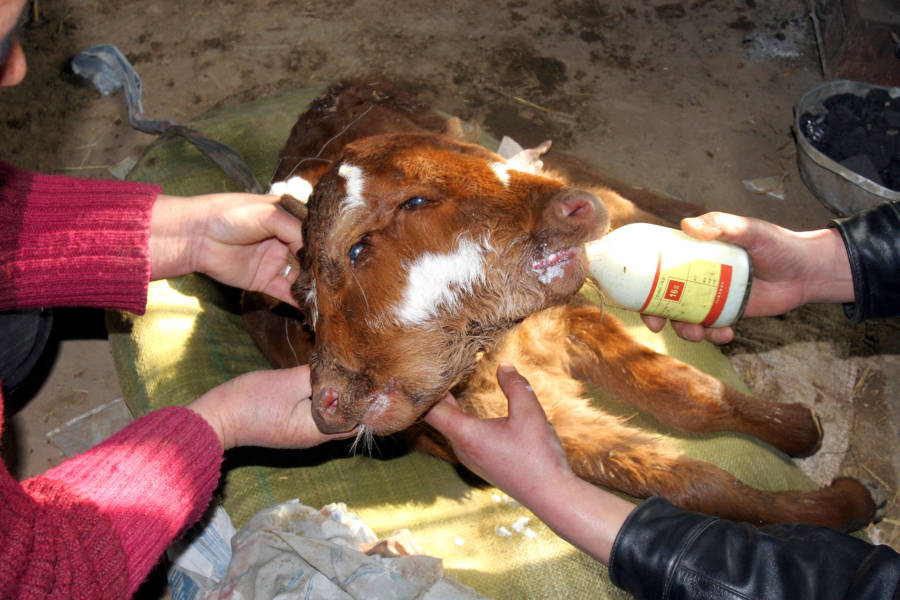 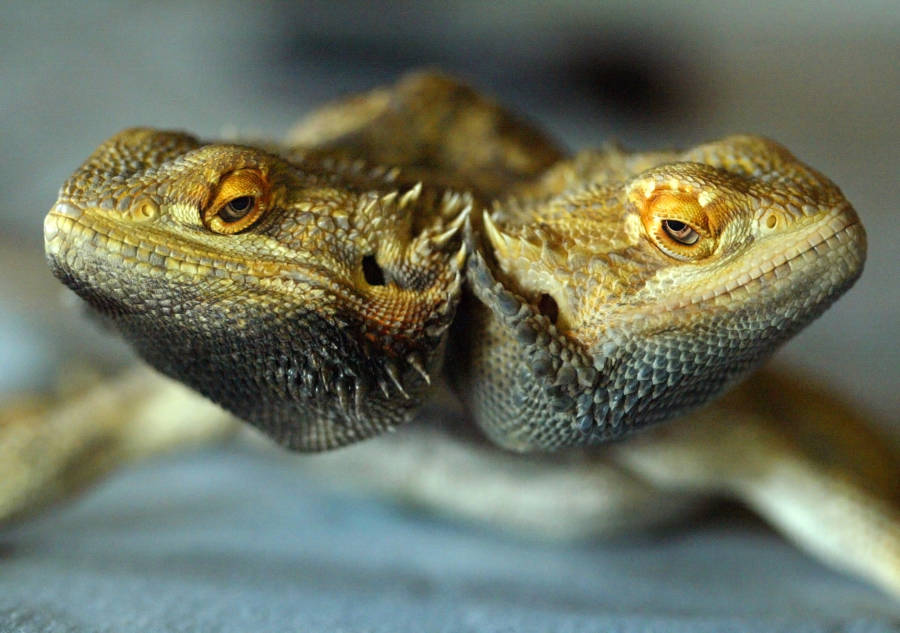 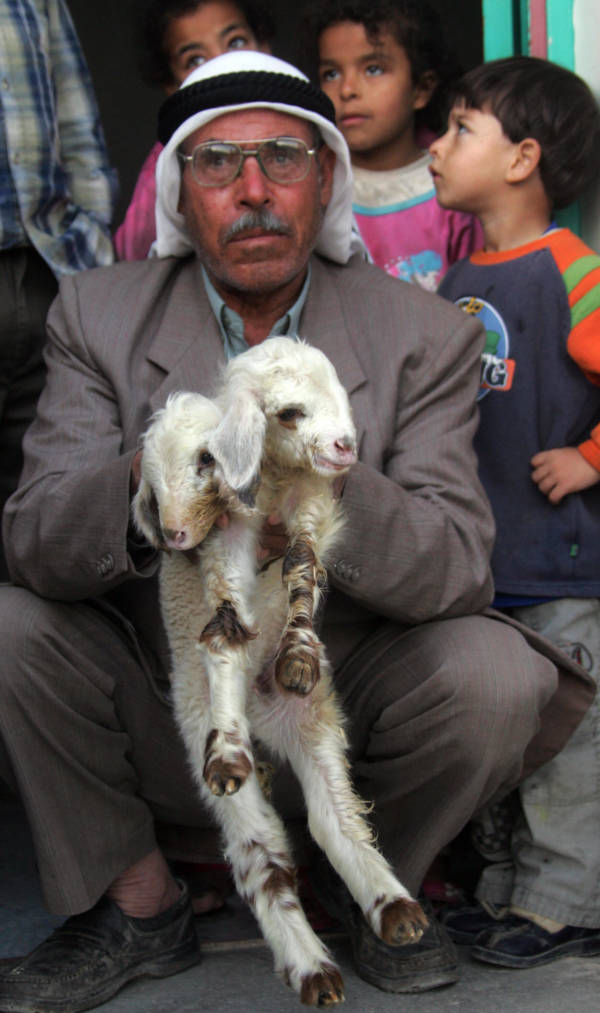 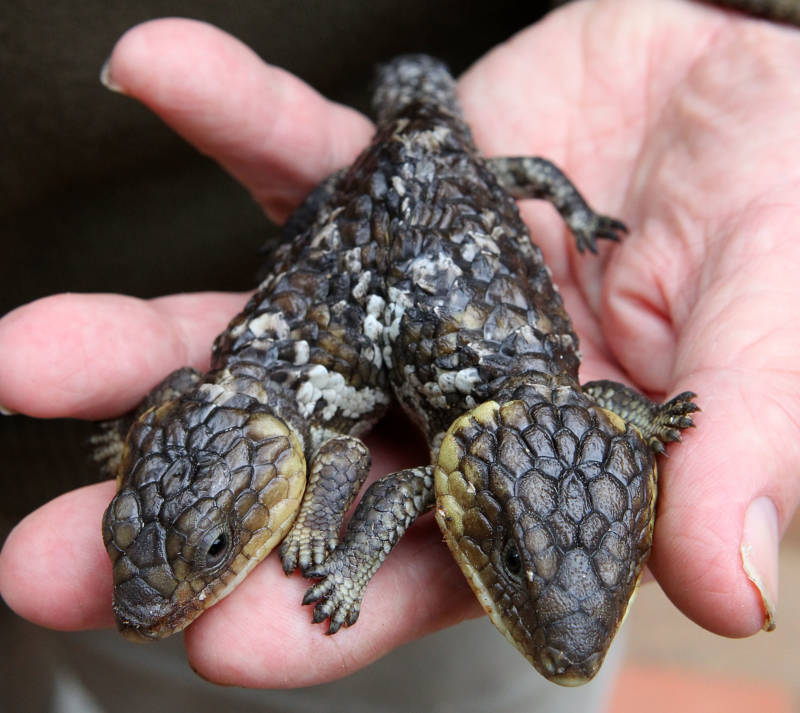 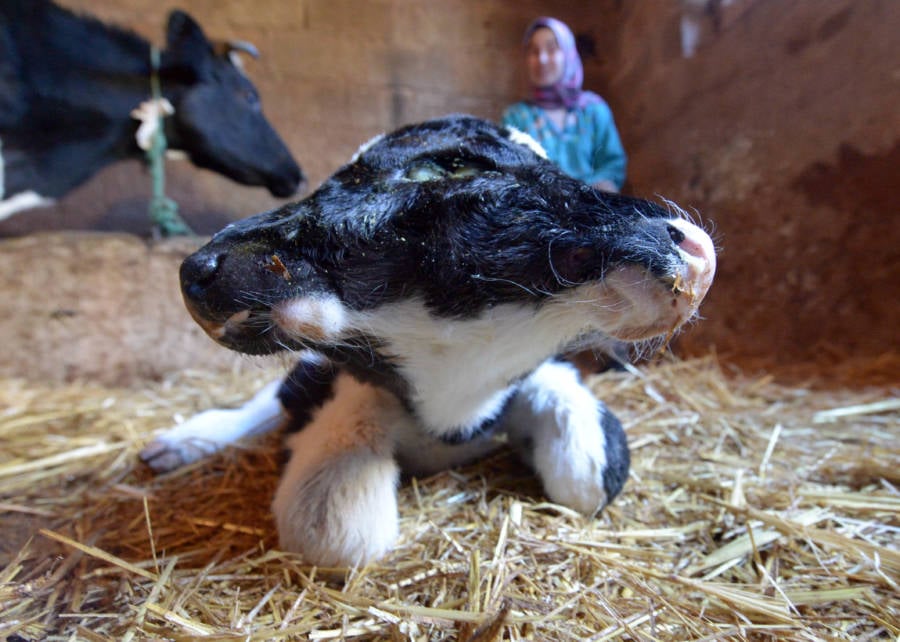 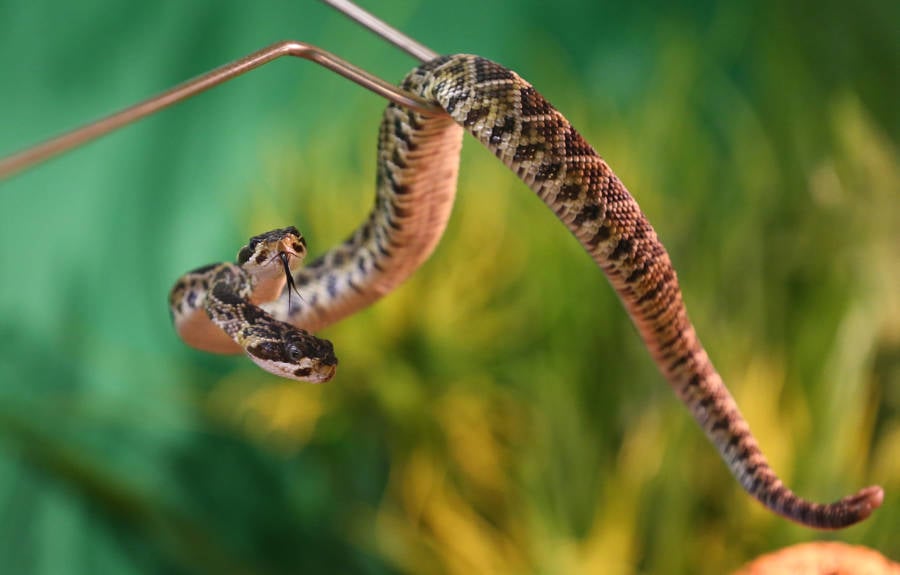 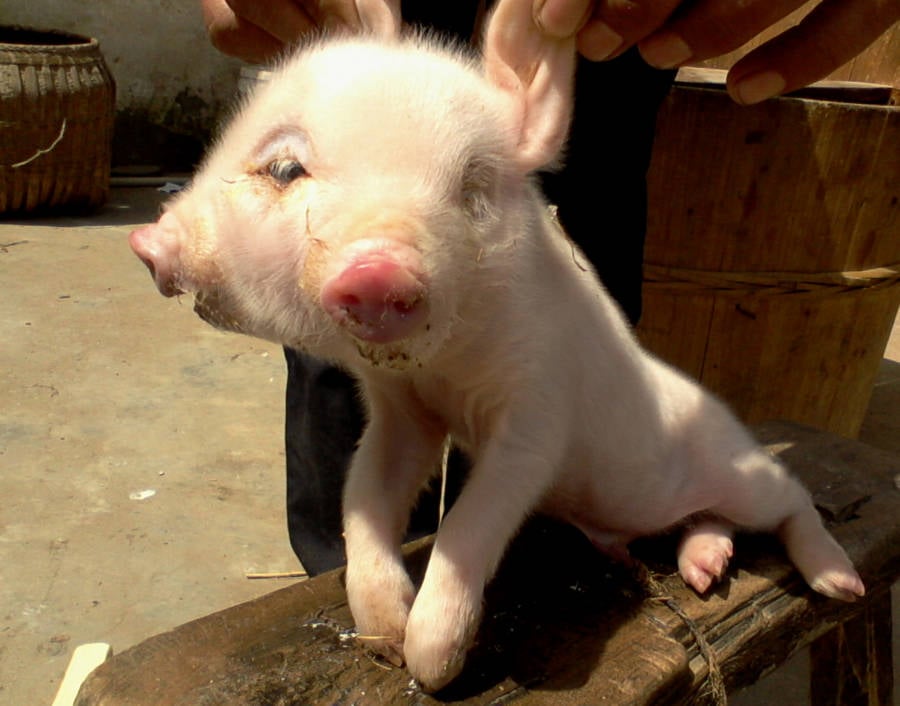 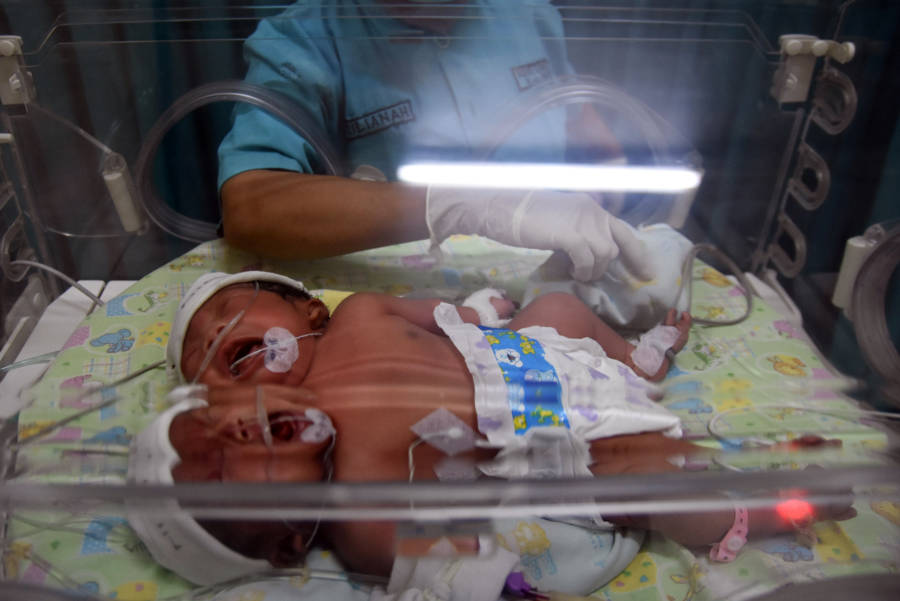 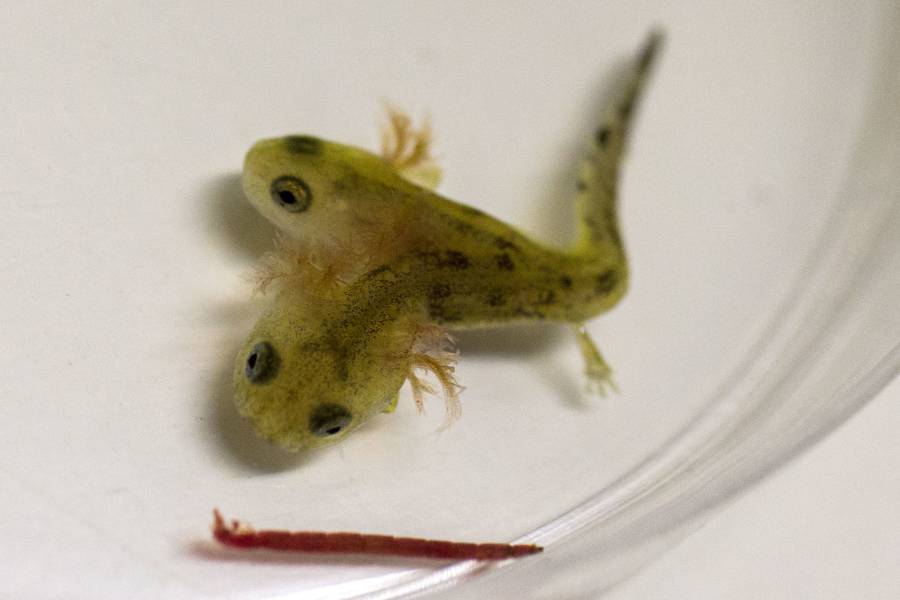 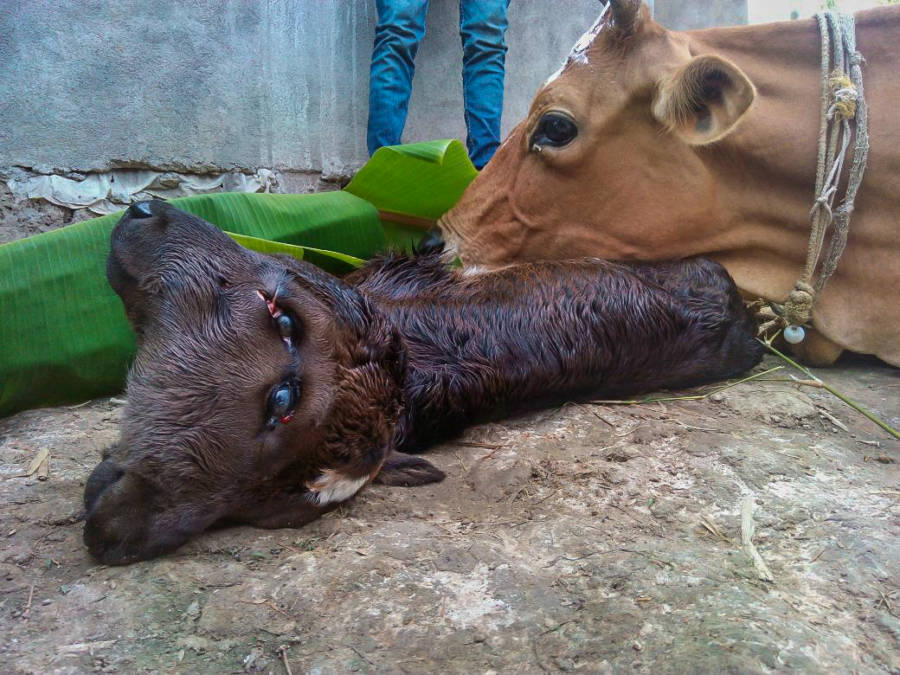 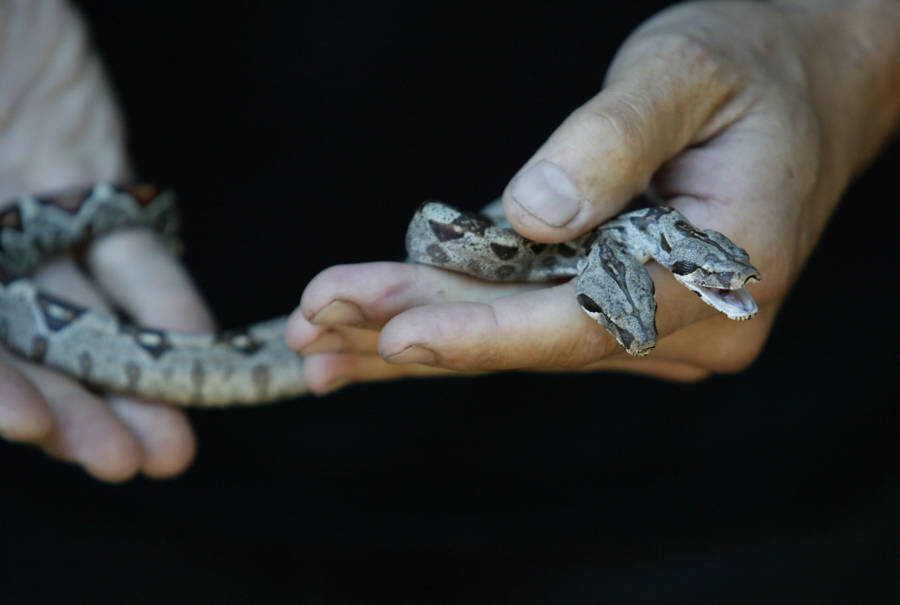 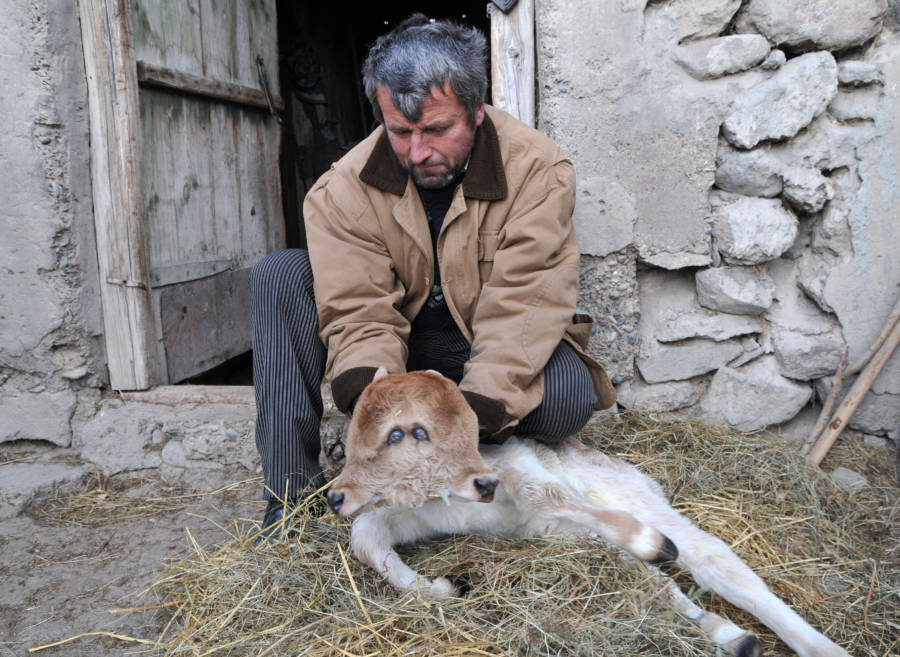 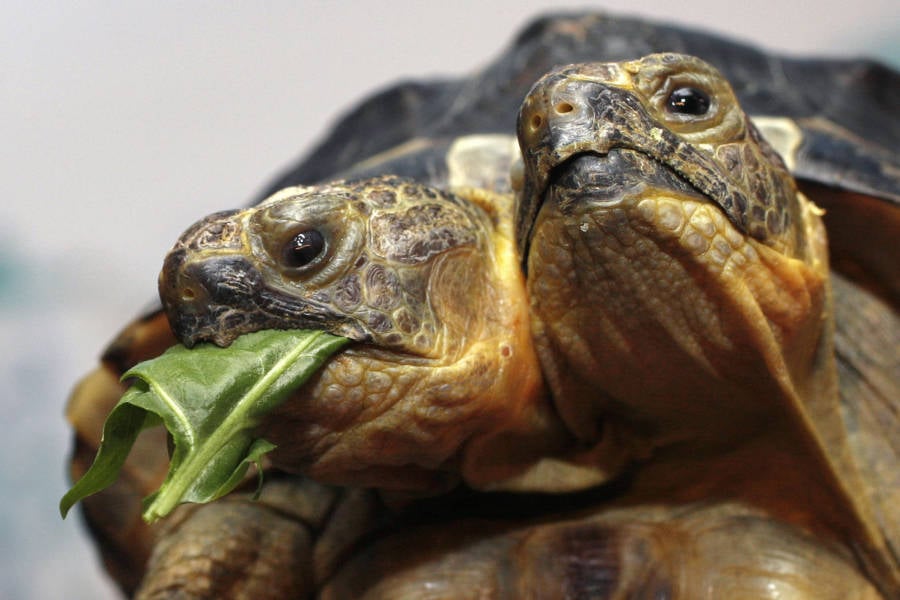 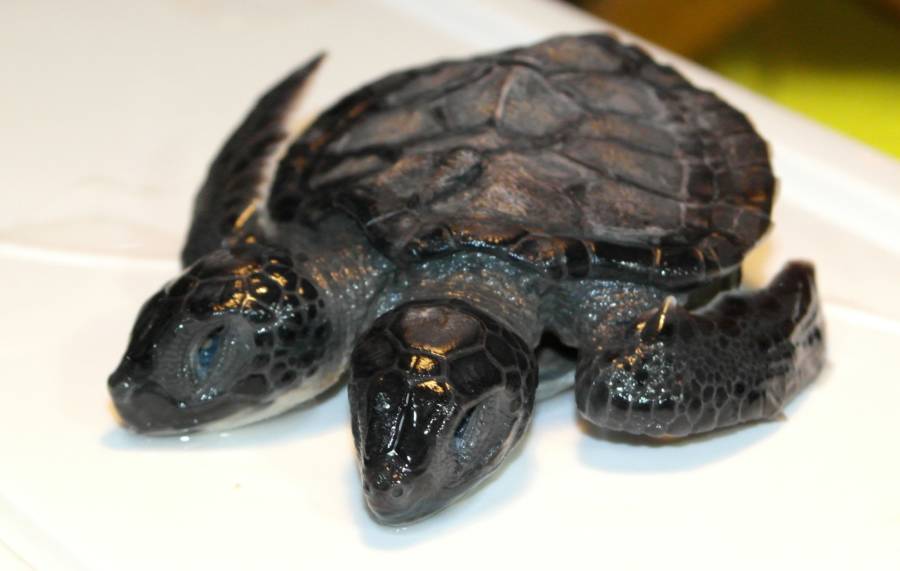 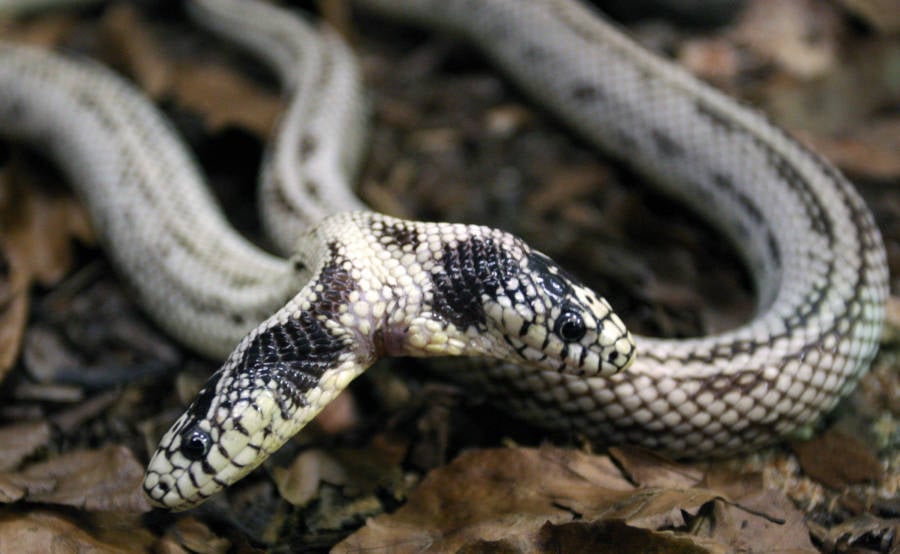 1 of 17
A two-headed turtle found at a market in China. Its new owner noted that it is in good health and eats more than normal one-headed turtles. March 14, 2006. VCG via Getty Images
2 of 17
Owners feed milk to a two-headed cattle cub with four eyes and two mouths in Lanzhou, China. February 5, 2007. VCG via Getty Images
3 of 17
Zak, right, and Wheezie is a rare two-headed bearded dragon owned by Barbara and Frank Witte of Fowler, California. Craig Kohlruss/Fresno Bee/MCT via Getty Images
4 of 17
A Palestinian farmer holds a two-headed sheep outside his family home in the West Bank al-Fawar refugee camp, near Hebron. November 9, 2008. HAZEM BADER/AFP/Getty Images
5 of 17
A two-headed bobtail lizard living in Perth, Australia eats from both heads but the larger head has also tried to attack the smaller one, and its movement is difficult as both heads control its back legs. April 22, 2010.Paul Kane/Getty Images
6 of 17
A two-headed calf, named Sana Saida ("Happy New Year" in Arabic) is seen in the Moroccan village of Sefrou. January 3, 2014.FADEL SENNA/AFP/Getty Images
7 of 17
A two-headed rattle snake in its terrarium in the zoo in Scheidegg, Germany. July 22, 2016.KARL-JOSEF HILDENBRAND/AFP/Getty Images
8 of 17
A newborn two-headed pig in a village in Jiujiang, in east China's Jiangxi province. A local veterinarian said it is was suffering a rare deformity and would find it difficult to survive. April 10, 2013.AFP/AFP/Getty Images
9 of 17
Polycephalism isn't limited to non-human animals. This two-headed baby girl was born at the Ibnu Sina General Hospital on August 10, 2016 in Gresik, Indonesia. She was diagnosed with parapagus and respiratory failure from the minute of birth. Sijori Images/Barcroft Images/Barcroft Media via Getty Images
10 of 17
A one-week-old two-headed salamander tadpole discovered by the Community Ecology Lab of the University of Haifa in Israel. Several causes for the mutation have been suggested by scientists, such as pollution of water, radiation changes, or inbreeding in a small population. December 9, 2014 JACK GUEZ/AFP/Getty Images
11 of 17
The calf born with two heads and four eyes lies near the mother cow in Assam, India. April 28, 2016. The calf was expected to live no more than ten days, but was two months old at the time that this photo was taken. Rima Sharma/Barcroft Images/Barcroft Media via Getty Images
12 of 17
A man holds two-headed snake at his silk screen store in the East Village, New York City. Mike Albans/NY Daily News Archive via Getty Images
13 of 17
A two-headed calf in the Armenian village of Sotk. January 28, 2011. KAREN MINASYAN/AFP/Getty Images
14 of 17
Janus, the Geneva Museum of Natural History's two-headed Greek tortoise eats salad as it is presented to the press and the public during the official celebration of its tenth birthday. September 5, 2007. FABRICE COFFRINI/AFP/Getty Images
15 of 17
A two-headed sea turtle is seen at Canakkale Onsekiz Mart University in Canakkale, Turkey on December 3, 2015. The two-headed turtle, which died soon after being found in Samandag district of Hatay province, had two hearts, two lungs and two stomachs. Burak Akay/Anadolu Agency/Getty Images
16 of 17
A two-headed snake named Tom and Jerry at the Vivarium exposition in Offenburg, Western Germany, May 8, 2008. JOHANNA LEGUERRE/AFP/Getty Images
17 of 17 Strange though it may seem, two-headed animals have been documented among many different species, although most tend to fall within the realm of turtles, snakes, and traditional livestock animals such as cows, sheep, and pigs.

While their appearance can certainly be shocking, the cause of their bicephalic bodies is nothing more than genetic mutation and cellular displacements, as the BBC writes.

When you see a two-headed, or polycephalic, animal, you’re actually looking at a set of twins that failed to separate after fertilization. This can result in the conjoining of twins when a gene known as “sonic hedgehog” or “SHH” is increased during embryonic development, which can cause the head or face to widen, often resulting in two faces. When a group of cells known as organizers becomes triggered, two entirely separate heads can form, resulting in individual necks stemming from a single body.

So, what causes such genetic abnormalities? Depending on the species, there is a wide range of proposed explanations.

When it comes to sharks, for example, of which there have been many mutations witnessed, researchers look to a variety of possible factors ranging from metabolic disorders and infection to pollution or overfishing, the latter of which can lead to a limited gene pool resulting in physical abnormalities. Some also blame rising water temperatures, although research is still being conducted in an effort to truly understand how these changes might affect genetics.

Despite the recent influx of two-headed marine life being reported, polycephalic animals are believed to have been around since the early days of human civilization, perhaps inspiring ancient myths and tales that tell of multi-headed beasts slain by heroic protagonists of their time.

However, many of these two-headed animals don’t live beyond the embryonic stage, and those that do survive birth typically don’t make it more than a few weeks or months, though there are exceptions to the rule.

See some two-headed animals that did survive long enough to be photographed in the gallery above.

After this look at two-headed animals, check out 29 of the most unbelievably weird animals on planet Earth. Then, have a look at Earth's rarest animals.