Meet The Hammer-Headed Bat, The African Megabat That’s Been Dubbed One Of The World’s Ugliest Creatures

The hammer-headed bat is the largest bat species found in Africa. But while it may look like a carnivore, it only eats fruit.

Throughout Equatorial Africa, the Hypsignathus monstrosus — better known as the hammer-headed bat — dominates the night sky with its monstrous wingspan and its pestilently loud noises. As one of the largest bats in the world, one would think that it would be a threat to humankind, especially since it cuts such an imposing figure. 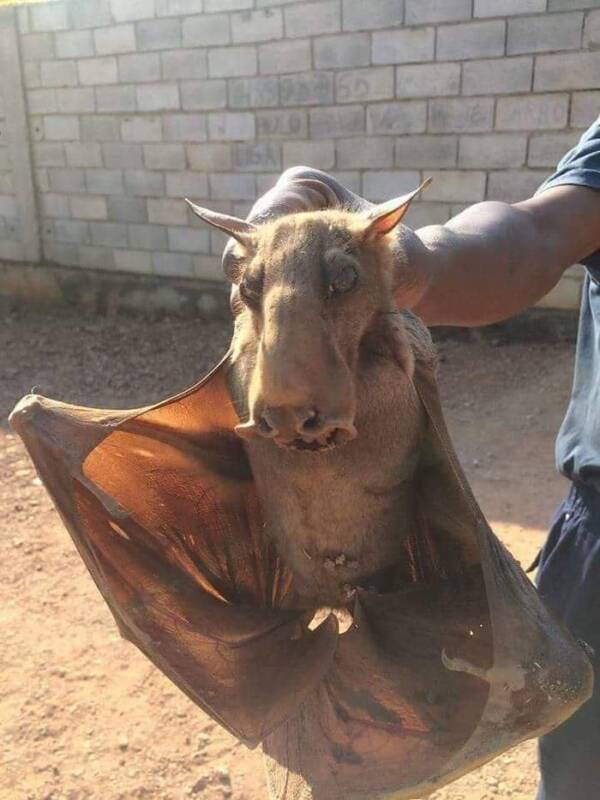 Per Se/FlickrMale hammer-headed bats can have a wingspan of greater than three feet.

While female hammer-headed bats look similar to other species of bats, the males are much more distinguishable due to their oversized lips and snouts. This unique appearance has even caused them to be dubbed one of the world’s “ugliest” creatures.

But despite its larger-than-life presence, the bat is nothing more than a fruit lover, subsisting solely on wild fruits indigenous to western and central Africa and serving no threat to humans or other animals.

That said, the hammer-headed bat is a threat in another, perhaps more surprising way.

With wingspans of up to 38 inches and weighing in at around a pound, the hammer-headed bat is Africa’s largest bat, according to Bat Conservation International. It’s also the most sexually dimorphic bat species in the world.

The average female weighs eight ounces and doesn’t appear all that different from other fruit bats. Males, however, grow much larger and have faces that clearly set them apart. Their larynx and rostrum are enlarged, creating a resonating chamber that makes it easier for them to create the loud honking noises that attract the females. 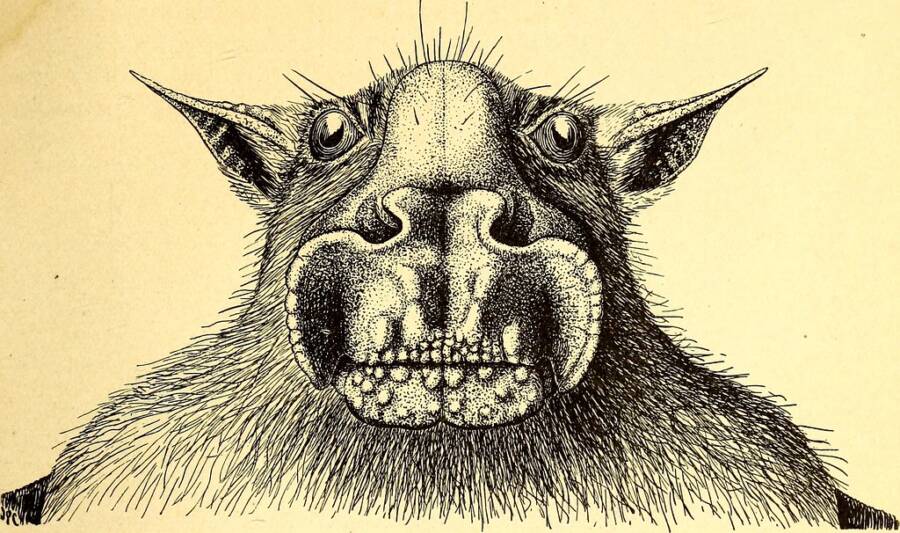 The bats have been spotted from Senegal in Western Africa to northern Angola, nearly 3,000 miles to the southeast. They thrive in the moist, tropical forests surrounding Equatorial Africa’s lowlands, swamps, and rivers.

Hammer-headed bats feast on the fruit that grows in the area, including figs, bananas, guavas, and mangos, making them frugivores. Because of their all-fruit diet, they’re considered a pest by many African farmers, who eliminate them when necessary to save their crops.

But farmers aren’t the only people who hunt down these distinctive creatures.

How The Creatures Are Hunted As Bushmeat

In addition to facing extermination at the hands of fed-up farmers, hammer-headed bats in certain countries must also remain on the lookout for hunters who want to eat them. According to Animalia, people in the Democratic Republic of the Congo and Nigeria kill hammer-headed bats in order to consume them as bushmeat.

“Bushmeat” is a catch-all term used to describe wild game in general, but it is often used specifically to denote game meat from Africa. In addition to its use as a food source in these Equatorial African countries, hammer-headed bats also occasionally turn up in “wet markets” in other parts of Africa and throughout the world.

Unfortunately, from an epidemiological perspective, wet markets sometimes do more harm than good. 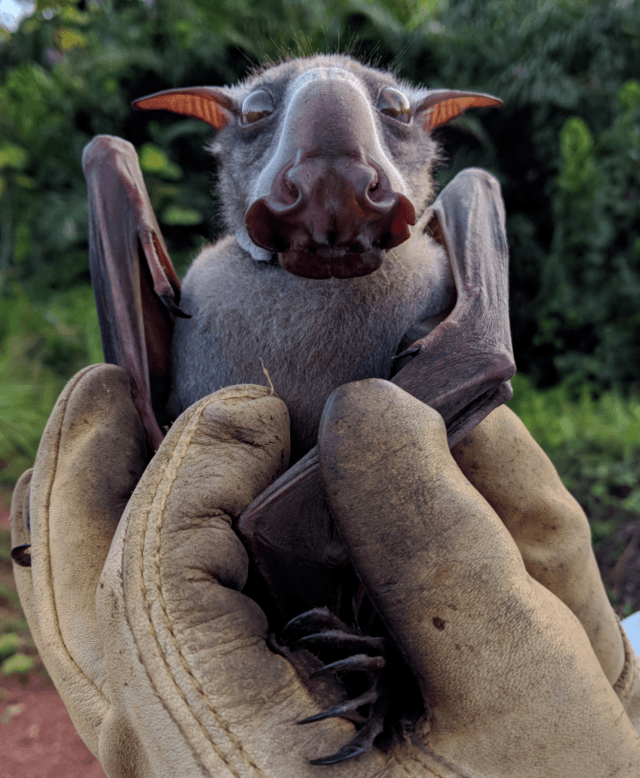 Wikimedia CommonsResearchers fitted this hammer-headed bat with a GPS tracker.

Previous studies conducted by the National Institutes of Health (NIH) have revealed that leks — or mating groups — of hammer-headed bats are considered “reservoirs” of the Ebola virus. The NIH reported: “Molecular testing implicated this species and other African bats as potential reservoir hosts for Ebola virus, and it was one of only two fruit bat species epidemiologically linked to the 2008 Luebo, Democratic Republic of Congo, Ebola outbreak.”

However, it’s worth noting that other studies haven’t conclusively determined that the bats are “ground zero” for the Ebola virus. To this day, additional studies are being conducted by scientists to determine the true nature of Ebola transmission, according to Science, but as of 2022, there are no definitive studies that link the bat to Ebola transmission.

While hammer-headed bats face the highest risk from farmers and hunters, some are also killed for another reason — to put a damper on their extremely loud mating calls.

The Unique Mating Rituals Of The Hammer-Headed Bat

According to a study published in the Journal of Zoology, the hammer-headed bat is one of the only confirmed species of bat that takes part in the “lek” mating system. In this mating ritual, large groups — or leks — of bats, from 20 to well over 120, gather to attract females. 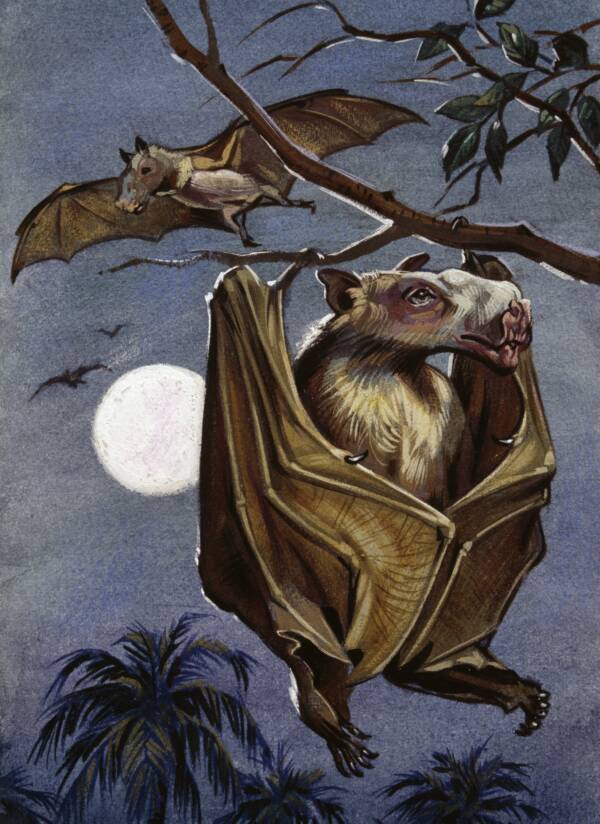 Each male claims a territory of about 30 feet, then hangs from a branch and flaps his wings while repeatedly honking as many as 60 to 120 times per minute. Female bats fly through the lek, select a male they wish to mate with, and land on the branch beside him. The male then lets out a “staccato buzz” sound, mates with the female, and hangs on the branch again, honking for the next female.

The polygynous males do not stick around to help raise their young. In fact, they don’t usually gather in large family groups at all. The roost of a hammer-headed bat typically consists of fewer than five creatures.

Thankfully, these extraordinary bats are not considered to be a threatened species, though increasing deforestation and climate change are beginning to impact their natural habitats. For now, conservationists simply continue to monitor one of Africa’s most iconic bat species.

Now that you’ve read all about the hammer-headed bat, learn about seven more of the world’s ugliest animals. Then, take a look at the giant golden-crowned flying fox, the largest bat in the world.