The chamois mummy is just a preview of the other animals, artifacts, and even humans that scientists expect to rise to the surface as glaciers continue to melt. 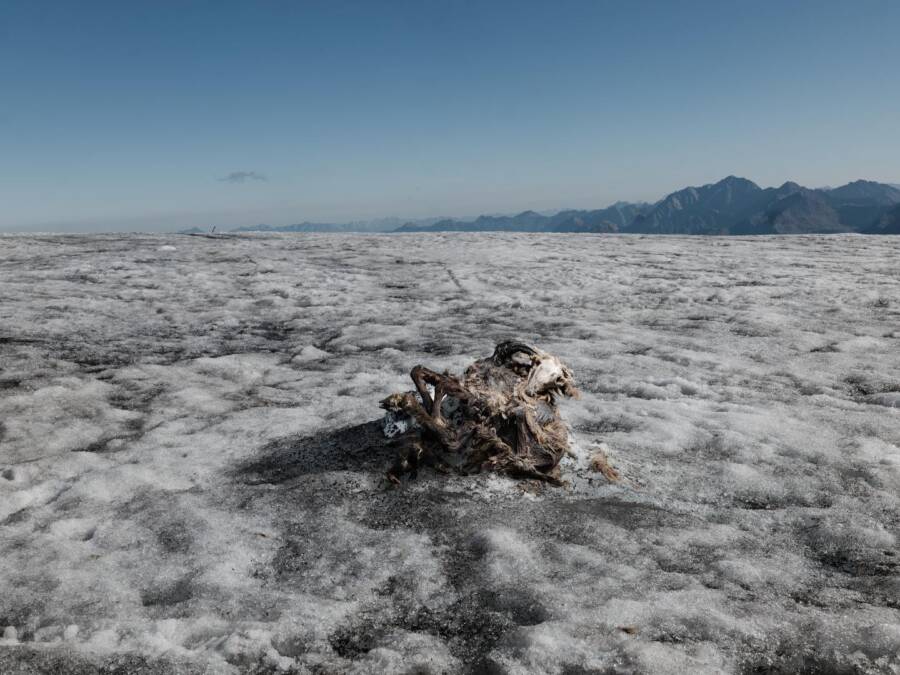 A team of glaciologists working on the Gepatschferner — Austria’s second largest glacier — was elated to find a small, goat-like animal preserved inside a partially melted wall of ice while performing a routine check-in on a nearby weather station.

Martin Stocker-Waldhuber, the researcher who made the discovery, noticed horns poking out of the ice at an elevation of over 11,000 feet, National Geographic reported.

“It’s incredible, and it’s incredible that she’s sitting exactly where we do our research, and that we passed right when it was coming out of the ice,” said Andrea Fischer, an Alpine glaciologist who led the team from the Institute for Interdisciplinary Mountain Research of the Austrian Academy of Sciences in Innsbruck.

The chamois was probably around two years old when it died. Its skin has peeled off its head, pulling a horn with it and exposing the animal’s bare eye sockets. Over its chest and ribcage, however, the skin has remained taut and leathery, and tufts of its fur still cling to its legs. Other pieces of fur were littered about the glacier.

Typically, discoveries like this are rare, but due to the unprecedented rate at which glaciers throughout the Alps have been melting, it’s possible that researchers might find more and more well-preserved creatures in the ice. It’s one upside to an otherwise unfortunate situation. 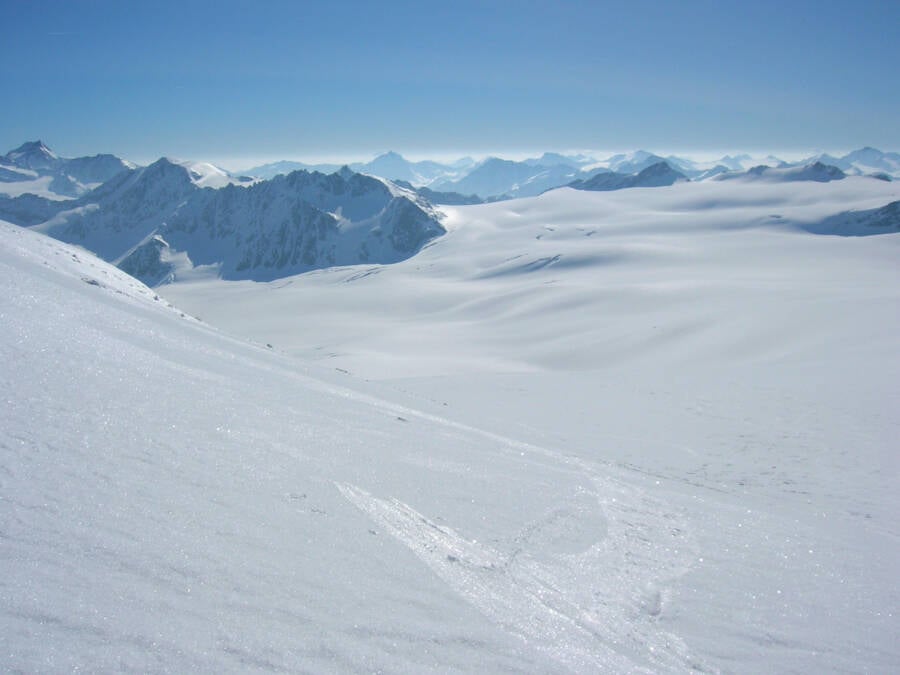 In fact, it was last summer when Stocker-Waldhuber first saw the chamois’ horn sticking out of the glacier, but at the time, there wasn’t enough of the animal emerging for the team to extract it from the ice without causing damage.

The rapid melting of the glaciers, however, afforded the team a rare opportunity to pull the chamois from the ice this year. As Fischer explained, by the end of summer more than 23 feet of ice will have melted off the surfaces of glaciers in the eastern Alps.

That’s more than any year to date.

But even once the chamois was pulled from the ice, the team had another problem — they were 11,500 feet up in the Alps, and they only had two or three days to get the chamois to a facility for preservation before it either decomposed or was eaten by vultures.

Fischer wrapped the chamois in a plastic sheet, sealed it shut with tape, and moved it to a location where a helicopter could safely retrieve it. From there, it was flown to a lower altitude, placed in a car, driven to nearby Innsbruck, and then stored in a freezer at the Tyrolean State Museum’s research center. 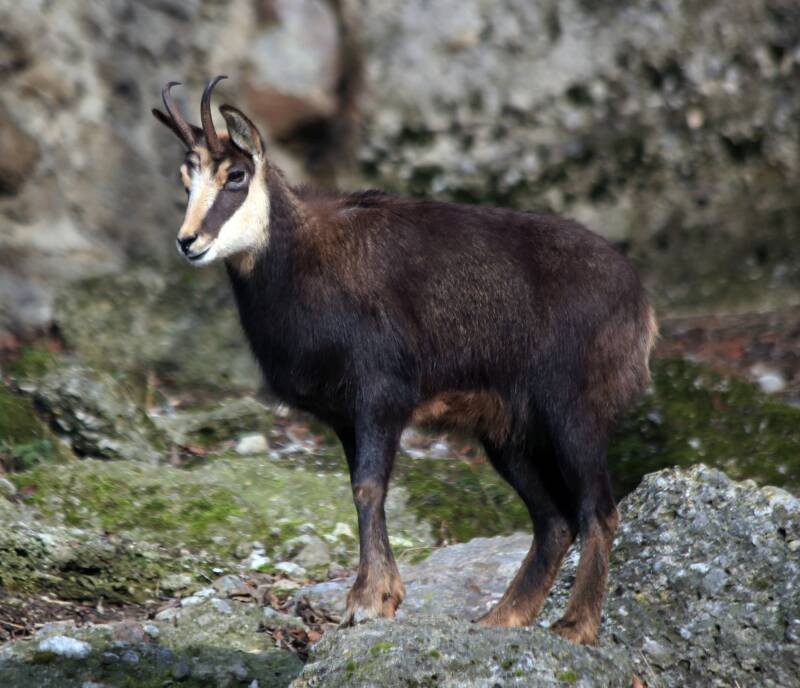 Wikimedia CommonsSometimes called “goatelopes,” chamois are found in the mountains of southern Europe and western Asia.

“I think none of us could have ever imagined how dramatic this summer could be,” Fischer said of the rapid melting that allowed for the chamois’ discovery. There are 4,000 glaciers in the Alps, all of which have been steadily melting since around 1850. Climate change has, unfortunately, greatly accelerated that process.

Fischer believes there were roughly eight more meters of ice underneath the chamois, dating back roughly 6,000 years. According to her estimate, that same spot will lose about 4,000 years’ worth of ice this summer.

Yet beneath the dread of climate change and melting ice caps, there is a sense of anticipation among researchers.

Albert Zink, head of the Institute for Mummy Studies at Eurac Research in Bolzano, Italy, told National Geographic much of that anticipation largely comes from the desire to find another prehistoric human similar to Ötzi the Iceman, the five-thousand-year-old mummy that was discovered by accident in 1991. 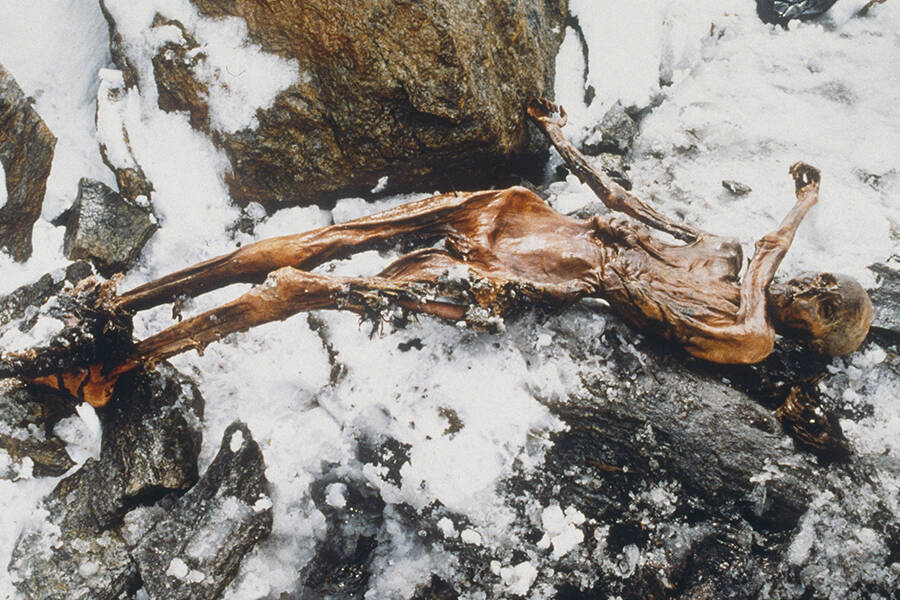 Leopold Nekula/Getty ImagesÖtzi is estimated to be 5,300 years old. He was five-foot-two and had brown eyes and dark brown hair.

Ötzi was found trapped in the ice 31 years ago just miles from where the chamois was discovered. He was initially believed to be a lost 20th-century explorer. While trying to free him from the ice, a local police officer hacked into Ötzi’s hip. The iceman’s bow was then broken in half to make him easier to transport, and the village undertaker broke Ötzi’s arm trying to fit him into a coffin.

It was much later that researchers realized Ötzi was actually an ancient human who had been perfectly mummified within the ice, completely intact — the first discovery of its kind.

Zink and his colleagues have already begun prepping preservation boxes to store the next Ötzi, should researchers like Fischer and her team find it.

After learning about the mummified chamois found in the Alps, read about the graveyard of mummified penguins found in Antarctica. Then, discover the World War I shelter and artifacts found in another melting glacier in the Alps.