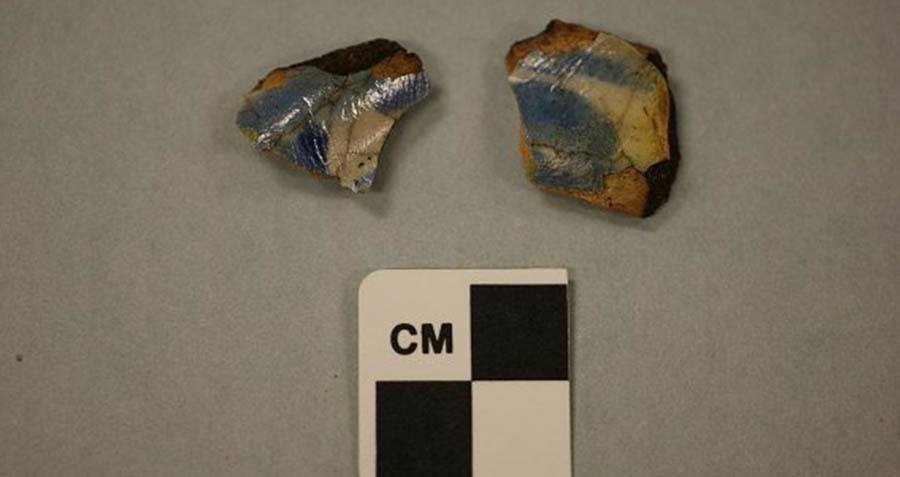 National Park ServiceTwo pieces of pottery recently found at the site of the former Roanoke Colony in North Carolina.

Archaeologists at Roanoke Island, North Carolina have just found 400-year-old artifacts believed to be from the mysterious Lost Colony, the first English settlement in North America.

Early this month, diggers at Roanoke with the National Parks Service’s Southeast Archaeological Center and the First Colony Foundation (FCF) uncovered several small pieces of Delftware pottery, a kind made in the Netherlands starting in the 16th century.

Based on that pottery’s particular tin glaze, archaeologists are quite confident that it comes from the era of the Roanoke Colony’s founding in the mid-1580s.

“There’s no doubt that those pieces of pottery are from that time period,” said Eric Deetz, the archaeologist who claimed to have discovered the pottery and a member of the FCF, a non-profit committed to illuminating the mysteries of Roanoke’s Lost Colony.

Those mysteries have enthralled countless history buffs amateur and professional alike for centuries — and with good reason.

On July 22, 1587, following in the footsteps of a group of colonists who’d settled there a few years prior, the English arrived at Roanoke. However, all they found from that first group was a skeleton, and within about three years, they themselves would be gone.

When an English mission to resupply the Roanoke Colony made landfall on August 18, 1590, no settlers were found, only the letters “CRO” carved into a tree and the word “Croatoan” carved into a fence post nearby.

That is, of course, the short version of the story, the one that’s served as the quintessential spooky tale of American history told to every grade schooler from one generation to the next.

However, despite sometimes wild theorizing about what strange, tragic fate befell the colonists, the answer is likely quite simple: They went to live with the Croatan Native Americans on nearby Hatteras Island.

In fact, with a number of people on the Island subsequently showing a mixed English/Native American phenotype and speaking a likewise mixed dialect, it’s all but certain that the Roanoke colonists and the Croatan simply began living as one.

North Carolina even passed a state bill effectively recognizing this fact way back in 1885, yet the spooky story of the unexplained disappearance, a tale too compelling to resist, has persisted.

Increasingly in recent years, the efforts of archaeologists like Deetz have helped to shed even more light on the matter. Deetz’s new discovery is indeed the latest in a string of exciting finds in the Roanoke area.

And while the ultimate mystery of the Lost Colony may actually be no mystery at all, finds like Deetz’s will help reconstruct this crucial moment in American history.

Next, discover more of the story behind the Roanoke Colony. Then, check out ten American history myths you probably believe.