Chang And Eng Bunker: The Strange Story Of The Original Siamese Twins

Chang and Eng Bunker were the original Siamese twins who wanted to live ordinary lives after touring as freak-show attractions for years. But considering they were connected at the liver, this could never truly be. 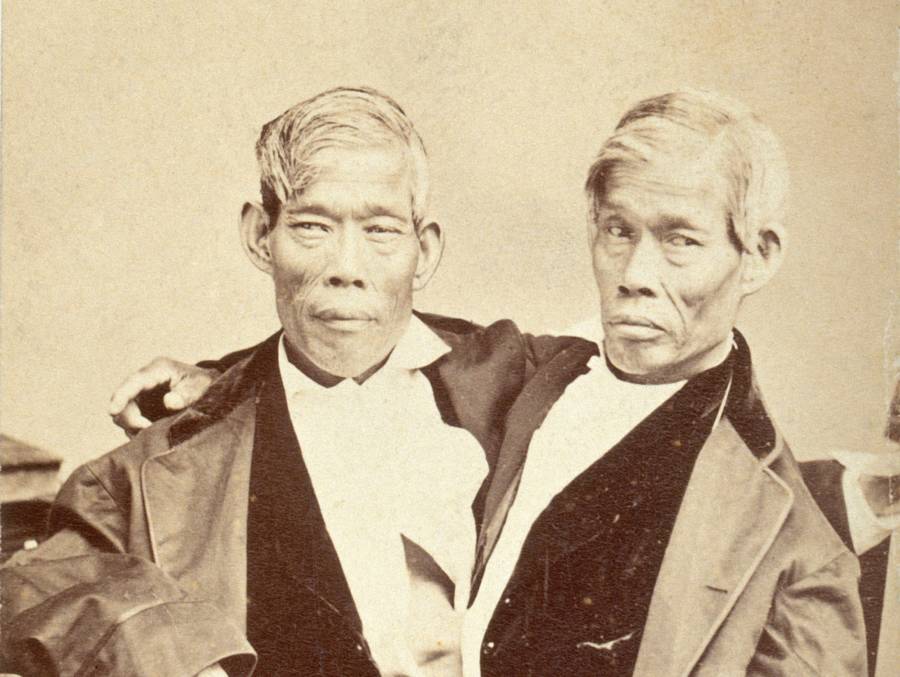 The original Siamese twins really were from Siam. When Chang and Eng Bunker were born in 1811 in a small town near Bangkok, they were medical marvels. The twins had fully formed, completely separate bodies, connected only by a small, four-inch bridge of flesh that ran between their stomachs.

They weren’t the first recorded case of conjoined twins to put themselves up for display, that honor as far as anyone can tell, goes to Mary and Eliza Chuklhurst who lived in 12th century England. But the Bunker brothers were so popular that they coined and made famous the phrase “Siamese twins.”

They were world-famous, gawked at as “freaks,” but all they ever really wanted was to live quiet, normal lives. Indeed, in this, they almost succeeded. 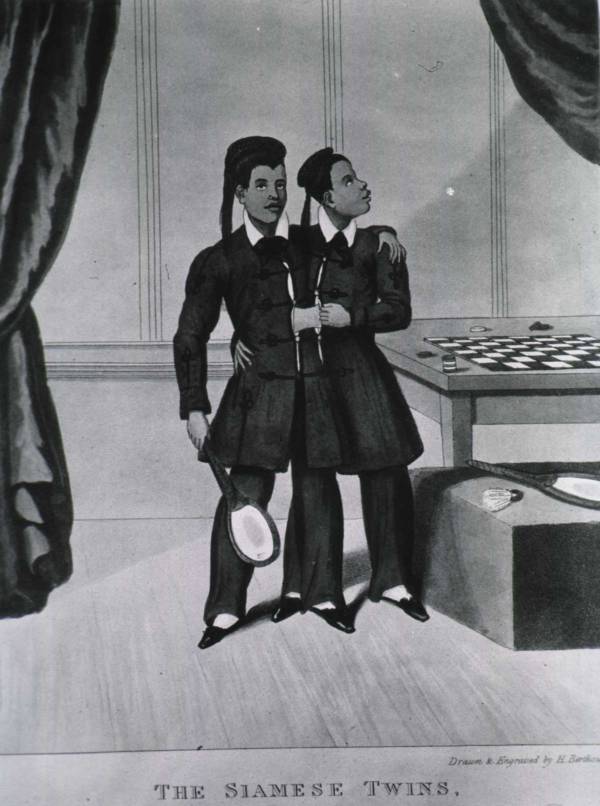 In Siam, Chang and Eng Bunker were known as the “Chinese Twins.” They lived in the fishing village of a Chinese community in Siam, now known as Thailand, born to parents of Chinese descent. To their neighbors, they weren’t considered truly Siamese. But to Robert Hunter the Scottish businessman who spotted them during a tour of Siam, there wasn’t much of a difference. When he saw the two brothers swimming in the river, he thought at first that he was seeing a mythological creature in the flesh.

When he realized that they were human boys, Hunter thought that they were his ticket to a fortune. He had little trouble convincing their mother who had just lost her husband to sell her sons to him for $500. After a long campaign of bribery and flattery to the King of Siam, he won the right to take 17-year-old Chang and Eng on a world tour. 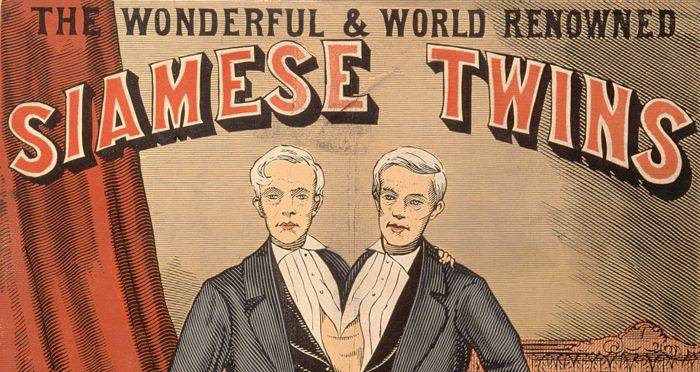 The Bunker brothers weren’t just freak-show attractions pushed to the side of a crowded carnival. They were a solo show consisting of a whole two-man act.

The boys were connected through such a thin thread that they could do almost anything normal men could do – and quite a few most could not. They would perform backflips and somersaults together, showcase a repertoire of wit, or just stand on display and answer any questions the audience had.

Hunter had bought them 30 months and in those first 30 months, they barely made a dime. They were treated like property, exploited for Hunter’s own gain. As soon as the Bunker brothers turned 21, though, they struck out on their own and ran a show of their own for another seven or eight years. 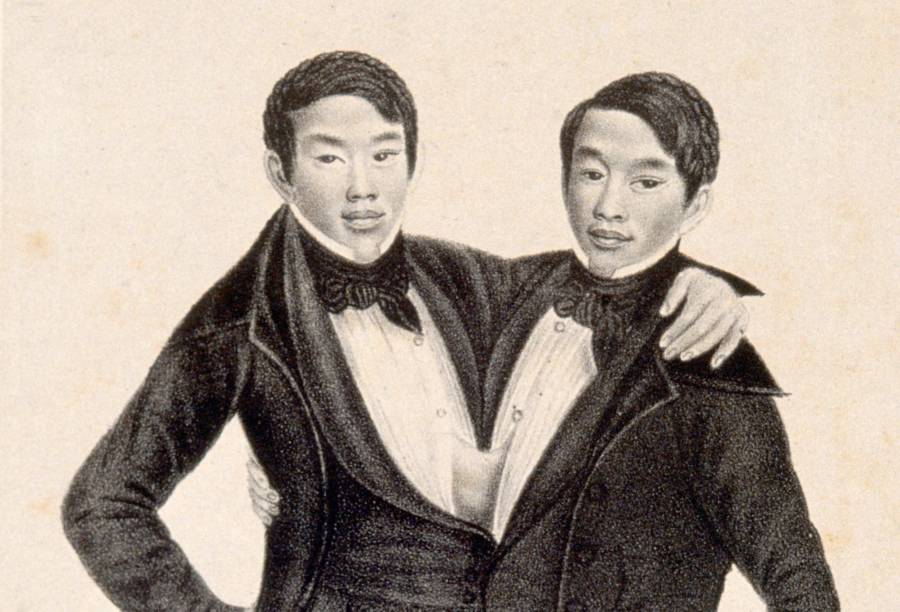 Wellcome CollectionChange and Eng Bunker. Circa 1811-1818.

The Bunker brothers made a small fortune touring, but after years of being gawked at, they decided they wanted to live normal lives.

In 1839, Chang and Eng Bunker bought a 110-acre farm in Traphill, North Carolina and settled there determined to be as ordinary as they possibly could. This was North Carolina, though, and the Civil War was still decades away. A “normal life” in which the Changs lived meant running a plantation off the backs of slaves. The Bunker brothers owned some 18 slaves, most of whom were bought while they were still children to prevent them from trying to run away.

The Sex Lives Of Siamese Twins 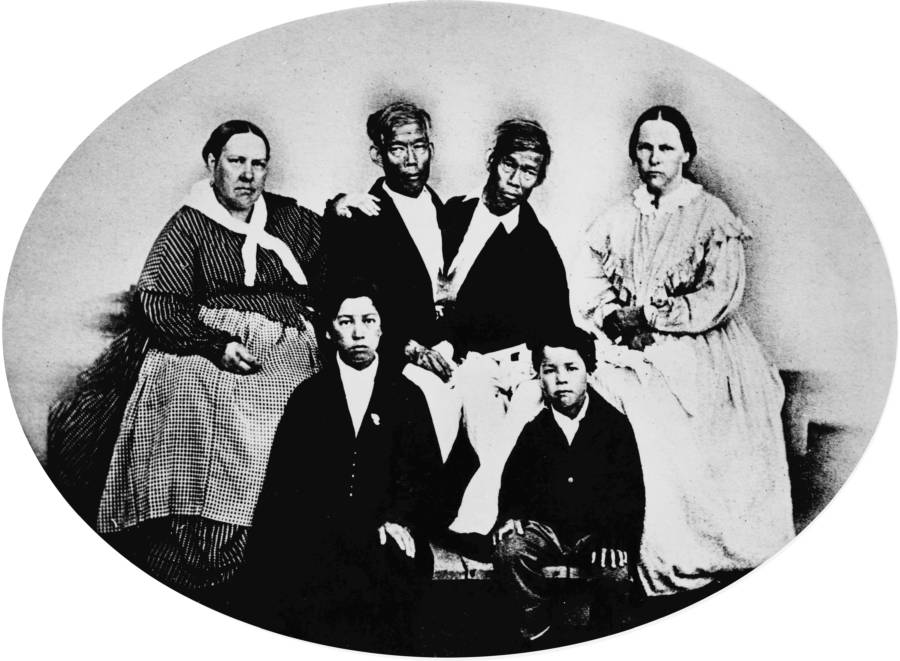 Wikimedia CommonsChang and Eng Bunker photographed with their wives, Adelaide and Sarah, and two of their sons, Patrick and Henry. 1865.

Chang fell in love. He and his brother had befriended two local girls, sisters named Adelaide and Sarah Yates, and Chang fell head over heels for the beautiful young Adelaide.

Eng, for his part, felt little to nothing for her sister Sarah, but when his brother declared his desire to propose, Eng agreed to follow suit just to make things easier. The brothers proposed to the sisters and rode through town, celebrating their love for all to see in an open wagon.

“All hell broke loose,” one paper reported. “A few men smashed through some windows at [Mr. Yates’] farmhouse,” while others “threatened to burn his crops if he did not control his daughters.”

There were great scandals in the papers about their marriages. One woman blamed her miscarriage on the “bestial” thought of the Bunker brothers procreating. But Chang and Eng Bunker didn’t let it get to them. All they wanted was to live together and to have otherwise normal lives, no matter what it took.

Compromises had to be made. In time, the sisters grew tired of sharing a bed and demanded to live in separate homes. The boys, on their part, accommodated them. Either one would accompany his brother to his wife’s home and live with her for three days. Then, when his time was up, they’d travel together to the other sister’s home for the next three days.

The Death Of Chang And Eng Bunker 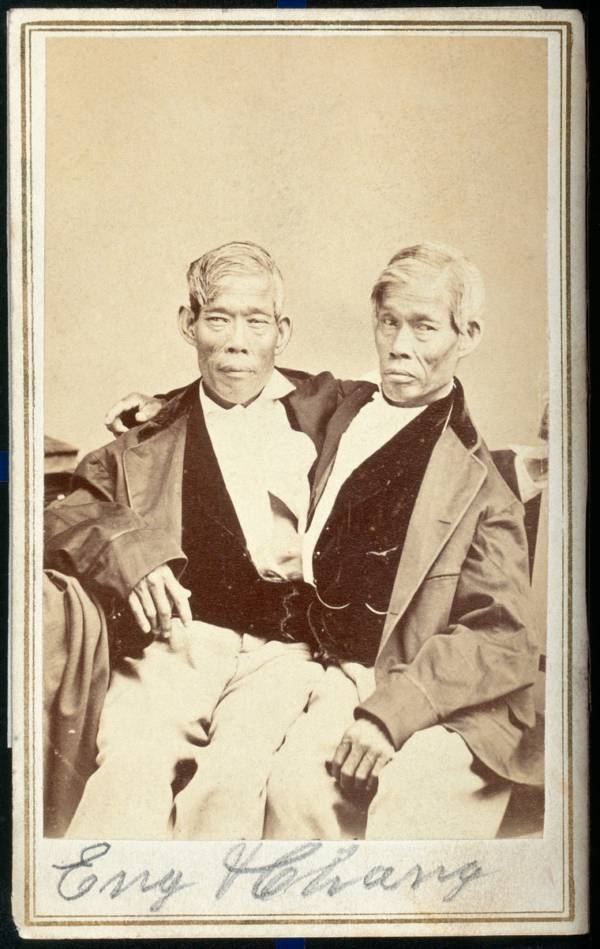 Wellcome CollectionChang and Eng Bunker in 1860.

Things turned bleak for the Bunkers during the Civil War. They invested a fortune into the Confederacy which was a bet that didn’t pay out. When the war ended the Bunkers were almost completely bankrupt. They had little choice but to go back on the road.

But now in their 50s, this second tour wasn’t quite to the same success as their first one. Chang fell into a deep and horrifying depression. He began drinking heavily and his body started to deteriorate quickly, while Eng who wouldn’t touch a drop of liquor, stayed healthy and strong.

After a stroke in 1870, Chang became little more than dead weight hanging off of Eng’s body. Eng was forced to set up a system of straps and crutches so that he could drag his brother around like a marionette.

For the first time in their lives, Eng talked about getting surgically separated from his brother, as Chang was now on a self-destructive spiral that could only end in his death.

That death came in 1874. Chang, after insisting on riding in an open carriage in the freezing winter weather, caught bronchitis. He suffered untreated, until Jan. 17, 1874 when Eng woke up to find his brother dead.

One of Eng’s son rushed in, alarmed by his father’s cries, and tried to help him wake Chang up. But nothing would work.

“Uncle Chang is dead,” the boy declared at last.

Within three hours Eng was indeed dead. In his final moments, he asked his son to help him pull his brother’s body as close to him as he could. The Siamese twins were 63.

An Eternity In Plaster 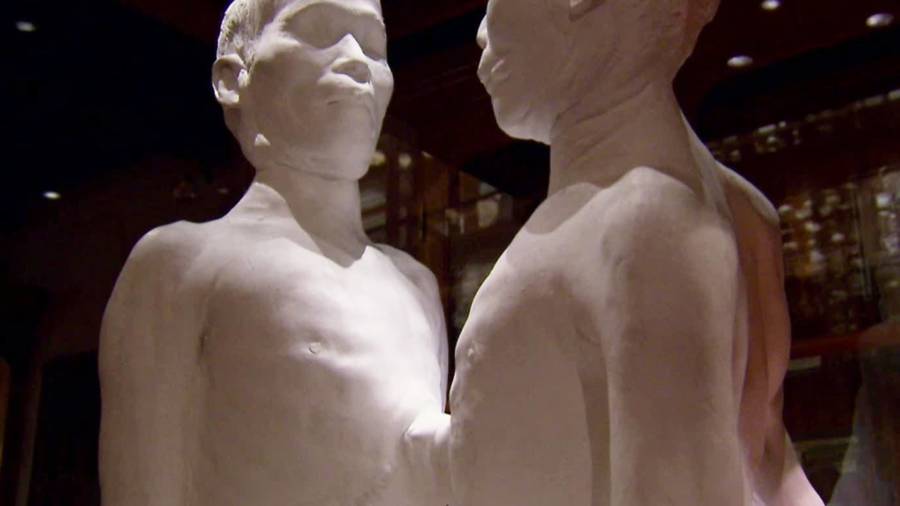 Travel Channel/YouTubeChang and Eng Bunker’s death cast, eternally linking them together at the Mütter Museum.

Chang and Eng Bunker’s bodies were dissected, studied, and photographed nearly as soon as they’d died. They were rushed off to the College of Physicians of Philadelphia where their bodies were pulled apart and studied as scientific anomalies.

Chang, they concluded, had died of a cerebral blood clot, but nobody could say for sure why Eng had died. At the time, though, it was said that he’d died of shock and a broken heart. According to modern medicine, the brothers could not have been separated successfully as children as they were connected at the liver.

The boys left an incredible legacy. They inspired a story by Mark Twain, a novel by Darin Strauss, a play by Philip Gotanda, the recent Hollywood film The Greatest Showman with Hugh Jackman, and a whole slew of other monuments. Plus, they were forever immortalized in the phrase that came to define their condition: “Siamese twins.”

Today, they have more than 1,500 descendants, many of whom still meet up at family reunions. Some have gone on to accomplish incredible things – like their Pulitzer Prize-winning great-granddaughter Caroline Shaw.

And the brothers themselves are still together, eternally linked in a plaster death cast on display at the Mütter Museum.

Together was the only way they could ever be in their time. Indeed, Chang and Eng Bunker literally couldn’t live apart.

After this look at the original Siamese twins, check out some of P.T. Barnum’s most famous oddities and hear the tragic stories of the performers behind these early “Freak Shows”.