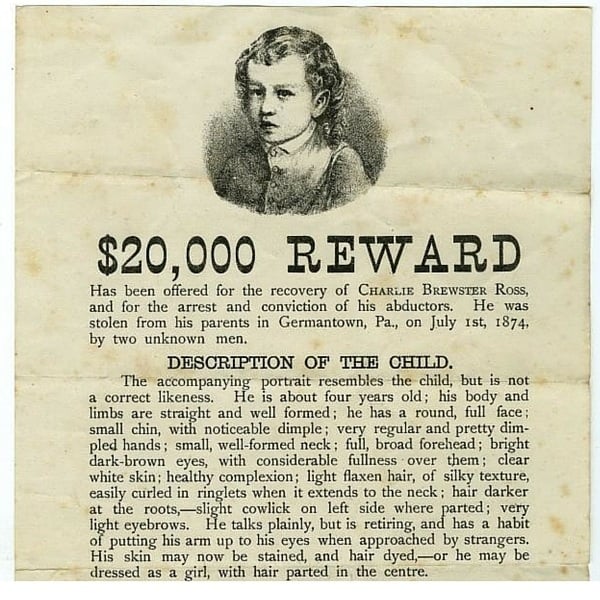 The case’s sole break came almost a year later when two men were shot while trying to break into the home of a judge in Bay Ridge, New York. The men, Bill Mosher and Joe Douglas, were career criminals who had just been released from prison and decided to celebrate by robbing the home of a well-known judge.

What they had not anticipated was that the judge’s neighbors would hear them break in and come to the judge’s defense armed with rifles, which they used immediately to shoot down the intruders.

Douglas died immediately, but Mosher stayed alive for a short time after being shot. He knew, however, that he would die from his wounds and told witnesses in the room that he had abducted Charley Ross.

What he told them exactly has always been up for debate: he either said that the pair had killed the child or that he at the very least knew where the child was. He gave no further clues and died minutes later.

Upon news of Mosher’s death-bed confession, then six-year-old Walter Ross was brought to the New York City morgue to view the bodies of Douglas and Mosher, and possibly identify them as the men in the carriage. Walter said they were. He specifically remembered Mosher, who had a peculiar nose (either from syphilis or cancer) which the child had remarked a year earlier as being “a monkey nose.”

While Walter may have identified the abductors, the whereabouts of Charley Ross remained unknown. Since both suspects were dead, the only other arrest made was that of a Philadelphia police officer who had apparently been a confidant of Mosher. Authorities believed that he had known about Charley Ross’ abduction and insisted otherwise.

The officer was tried and convicted of a lesser conspiracy charge, not kidnapping, and spent six years in prison.

The Ross’s search for their son did not end. Over the course of their lives, they spent more than $60,000 (what would be equal to $1.2 million today) trying to find their son. Mr. Ross published a book, The Father’s Story of Charley Ross, and often spoke about the case, even after the media’s interest dwindled.

More than a century later, the name Charley Ross has not been entirely forgotten. An online database for missing children, The Charley Project, was named in his honor. And in the years that would follow, many high-profile child abductions were brought into light through the media’s interest in the case.

The faces of missing children were put on milk cartons, circulated through PR wires and, later, on television screens. Perhaps most of all, Charley Ross’s legacy lives on through the lesson we instill in our children from a very young age: don’t take candy from strangers.