The Sarcophagus Keeping Reactor 4 At Bay

The best preventative measure Chernobyl could’ve included in its design was a containment structure to prevent radiation from escaping in case of structural failure. Following the accident in 1986, the Soviets built a temporary “sarcophagus” to enclose the dangerous reactor, but the concrete structure was built as an emergency response with severe time constraints.

As such, the sarcophagus was designed with much of the reactor’s structurally unsound and damaged remains. It was never intended as a final, permanent solution to radiation containment, however. Nonetheless, the shelter managed to confine further radioactive contamination and allowed officials to closely monitor the reactor’s activities post-explosion.

Ultimately, construction of the New Safe Confinement (NSC) was finally completed in November 2016. 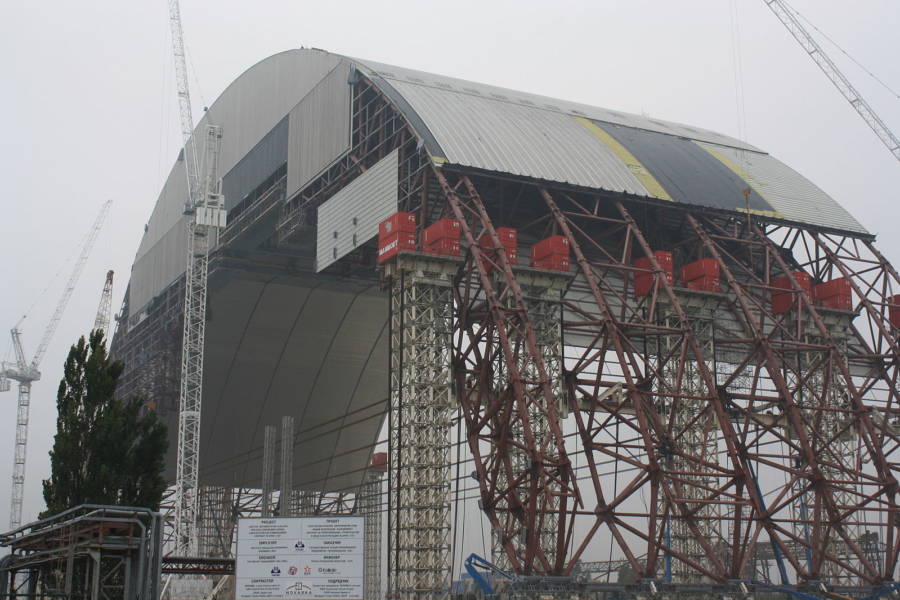 The NSC was finally deployed into position over the disintegrating sarcophagus in the hopes it will contain the reactor’s remaining radiation for the next 100 years, Radio Free Europe reported. Positioning the 109-meter-high and 257-meter-long metal structure into place took two weeks.

Funded by the European Bank for Reconstruction and Development, the project cost $1.6 billion and currently involves around 3,000 workers on-site.

The new equipment and safety systems being put into place are still being troubleshooted, installed, and tested — with the main control room, or “Confinement Management Center,” receiving livestreams from dozens of cameras throughout the NSC. The project made sure to incorporate automated fire-suppression systems as well.

As it stands, around 200 tons of radioactive material still remain beneath the old sarcophagus with NSC workers routinely monitoring exposure on their persons with on-site equipment. Officials are adamant, however, that the radioactivity is fairly low these days in and around Pripyat and poses little to no risk.

With a network of passageways, camera systems, and preventative fire suppression tools in place, the NSC project will eventually garner several elevators and receive its finishing touches. 33 years later, the Chernobyl disaster site is still being nurtured to become a more sustainable and secure part of the world. Though the surrounding town of Pripyat remains abandoned — by humans.

The Startling Resurgence Of Wildlife In Chernobyl Exclusion Zone And Pripyat 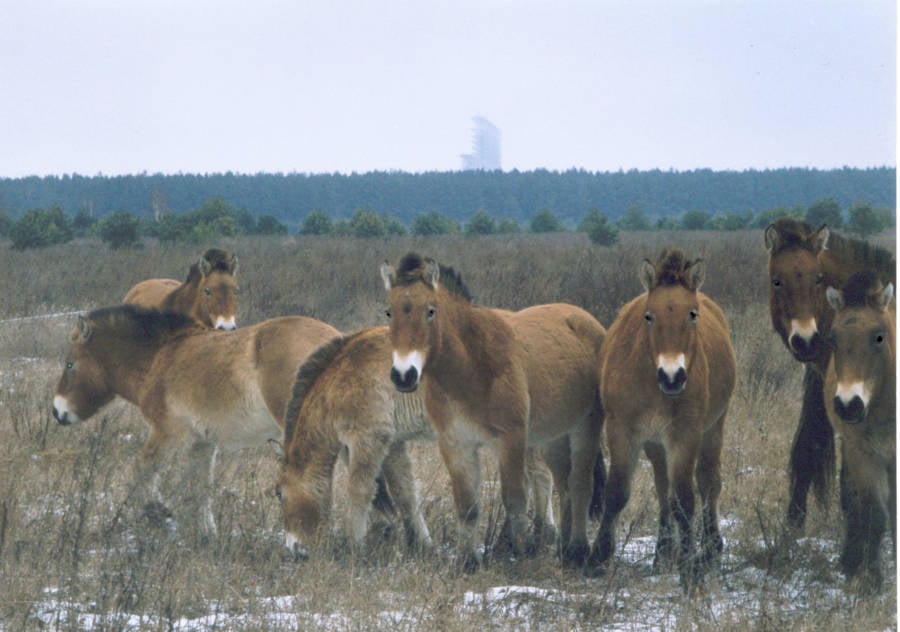 Researchers from the University of Georgia recently studied the resurgence of wildlife in the Chernobyl Exclusion Zone (CEZ) by setting up a myriad of camera traps to observe any and all species therein. Published in the March, 2019 edition of the Food Webs journal, the experiment has found the CEZ to be fertile ground for wild animals to not only survive, but flourish.

An analysis of the team’s footage showed 10 mammals and five birds, ranging from mice, raccoon dogs and wolves, to American mink and Eurasian otters within the CEZ in and around Pripyat. Tawny owls, magpies, and white-tailed eagles have made the CEZ their home, as well, with researchers admitting that some of these species had never before been seen in the region at all.

“We’ve seen evidence of a diversity of wildlife in the CEZ through our previous research, but this is the first time that we’ve seen white-tailed eagles, American mink and river otter on our cameras,” said the study’s co-author, James Beasley, in a statement. 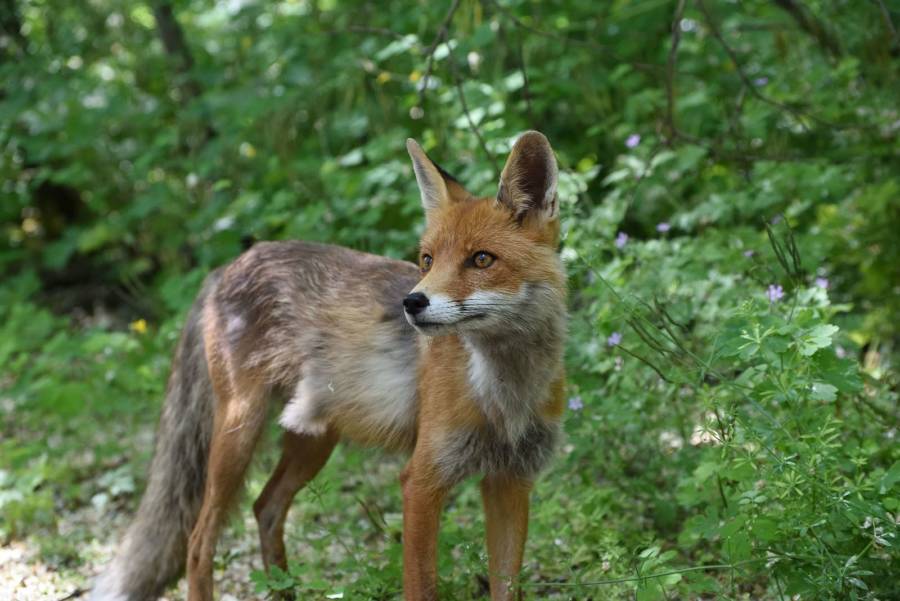 During similar research in 2015, Beasley’s team found thriving populations of elk, red deer, wild boar, and wolves in the abandoned 1,000-square-mile CEZ — including the abandoned town of Pripyat. For their new venture, the team decided to focus exclusively on scavengers. What they found — 98 percent of fish they left outdoors was eventually eaten by wildlife — pointed toward a surprisingly healthy community of scavengers, and hence, an ecosystem on the rise.

“This is a high rate of scavenging, and given that all our carcasses were consumed by terrestrial or semi-aquatic species, it verifies that the movement of nutritional resources between aquatic and terrestrial ecosystems occurs more frequently than often recognized,” said Beasley.

“We tend to think of fish and other aquatic animals as staying the aquatic ecosystem,” he explained. “This research shows us that if a reasonable proportion of dead fish make it to shore, there is an entire group of terrestrial and semi-aquatic species that transfer those aquatic nutrients to the terrestrial landscape.”

Marina Shkvyria, a wolf expert at Ukraine’s National Academy of Sciences, encountered similarly promising results during her research in 2015, National Geographic reported. She found the CEZ to be a refuge for moose, deer, beavers, owls, bears, lynx, and most importantly to her — wolves. 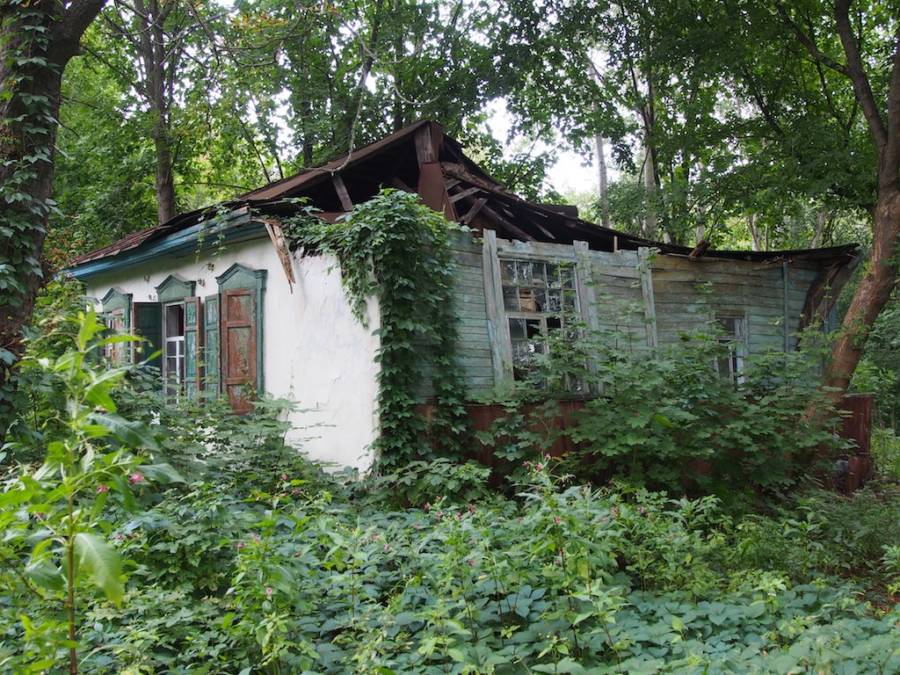 “We came down here late last spring and howled, and the young wolf pups howled back from the top of that hill,” she said, referring to a pack she discovered near an abandoned CEZ village. Coincidentally, Beasley had begun his own research around the same time and was convinced at the ecological rebound after his five-week survey had concluded.

From 21 boars, nine badgers, bison, 26 gray wolves, 60 raccoon dogs, and 10 foxes, the evidence of a thriving, natural habitat was finally presenting itself after decades of seemingly futile hope.

Perhaps most pointedly, Shkvyria used a nearby tree as a prime example of how fast things in Chernobyl were changing for regional wildlife.

“Literally three weeks ago that tree was still standing,” she said, pointing to a half-eaten trunk. “The beaver population is growing. Beavers can return it to being a little bit more wild. It will become like it was a hundred years ago.”