The Katyn Massacre: When The USSR Purged 22,000 Polish Men — Then Blamed The Nazis

The Soviet Union even went so far as to include the Katyn Massacre among the list of Nazi war crimes presented at the Nuremberg trials. 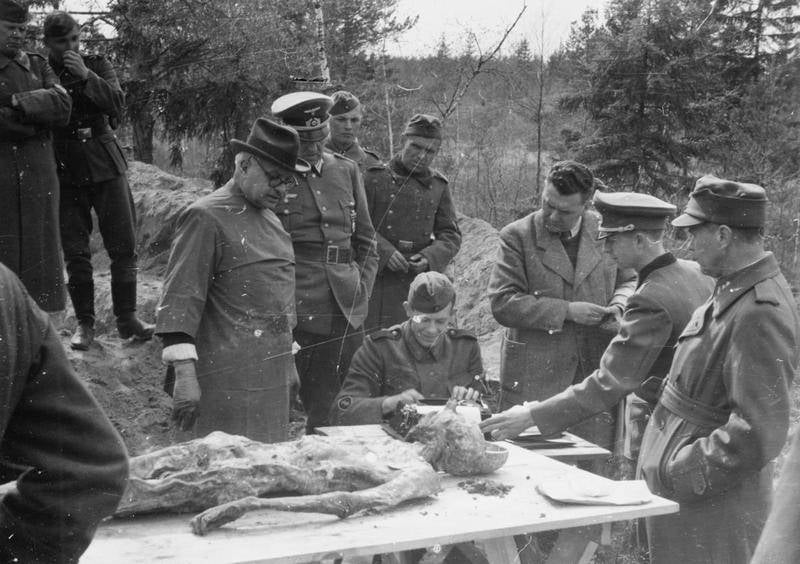 Wikimedia CommonsOfficials examine the exhumed remains of the Katyn massacre. 1943.

In 1940, Poland was caught between the military aggression of both Germany and the Soviet Union. The conflict climaxed that spring in Russia’s Katyn Forest when the Soviets murdered 22,000 of the best and brightest Poles of their generation en masse — then tried to blame the whole thing on the Nazis.

The Katyn massacre and its ensuing cover-up shaped Russo-Polish relations for the next 70 years and remains shocking to this day. 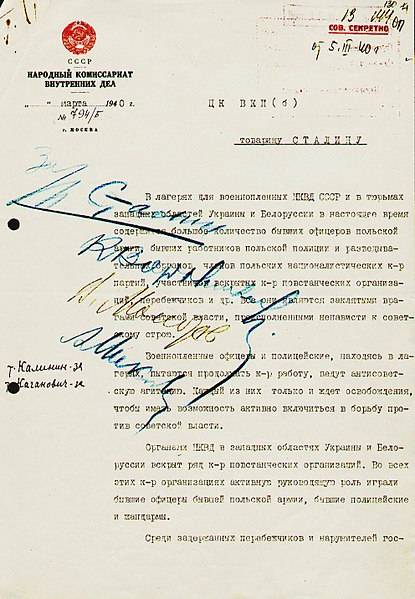 After Poland was divided between Germany and the Soviet Union in 1939, most native Poles not eligible for military service (like women, children, and the elderly) were shipped to the hinterlands of the Soviet Empire to die or submit to Soviet control. The other faction of Polish society faced a different fate.

These victims included Polish military officers and political enemies of the Soviet Union including politicians and landowners, as well as intellectuals and professionals like writers, professors, engineers, and lawyers. 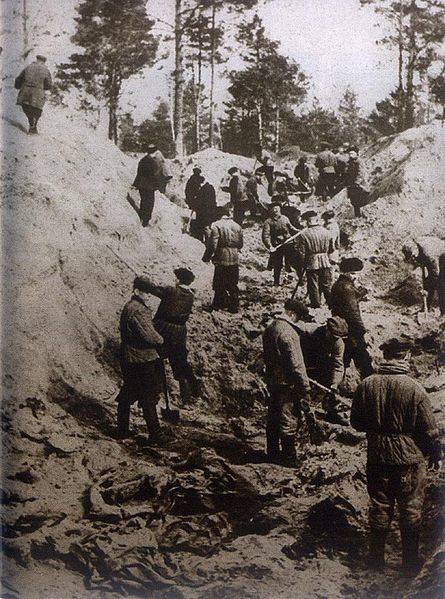 Wikimedia CommonsExhuming the victims of the massacre.

“Members of various counter-revolutionary spy and sabotage organizations, former landowners, factory owners, former Polish Army officers, government officials, and fugitives – [are] to be considered in a special manner with the obligatory sentence of capital punishment – shooting.”

In all, some 14,700 Polish servicemen and 11,000 Polish high-ranking civilians were rounded up with the intent to be executed in one of three locations: Katyn, Tver, or the prison of Kharkiv. 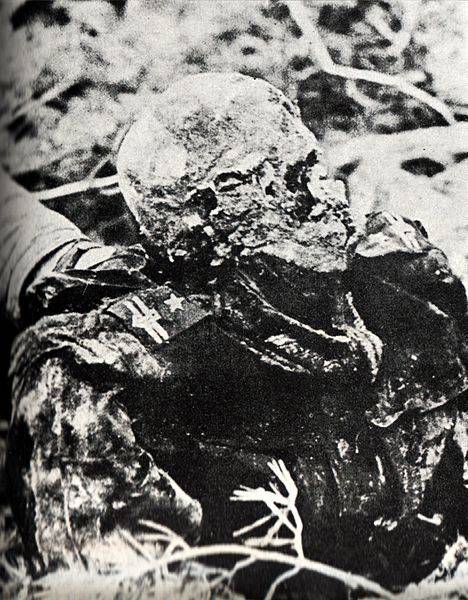 Wikimedia CommonsA skull exhumed during investigation into the Katyn massacre.

The men’s hands were bound behind their backs with wire and then they were summarily shot in the back of the head. Bulldozers had to dig the mass grave for the many thousands killed in Katyn in April and May. Meanwhile, in Tver, the men were individually shot in a soundproof room and their bodies were deposited into a truck outside.

The Discovery Of The Katyn Massacre 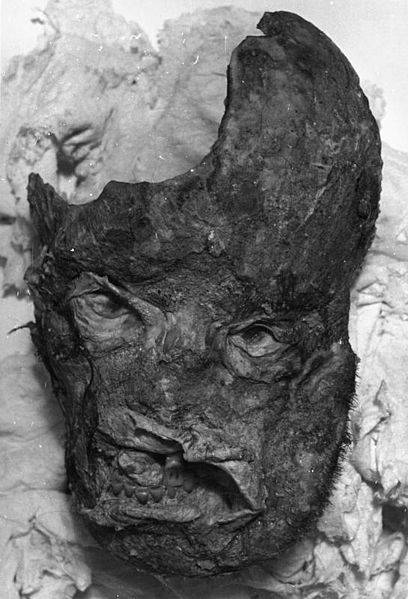 Wikimedia CommonsThe mummified skull of an officer killed during the Katyn massacre.

The fate of the 22,000 Poles killed in the Katyn massacre went undiscovered until 1943 when Nazi troops found the mass grave in the forest.

In 1941, the Polish government-in-exile had agreed to join up with the Soviet Union to fight together against the Nazis, at which point the Poles expected their military officers who they believed were simply imprisoned at Katyn to be released. The Soviet Union, not wanting to admit the truth, claimed that those men were nowhere to be found and had presumably escaped to Manchuria.

But on April 13, 1943, the Germans uncovered mass graves from the Katyn massacre in the forests and hoped that the discovery would turn Polish opinion against the Soviets. 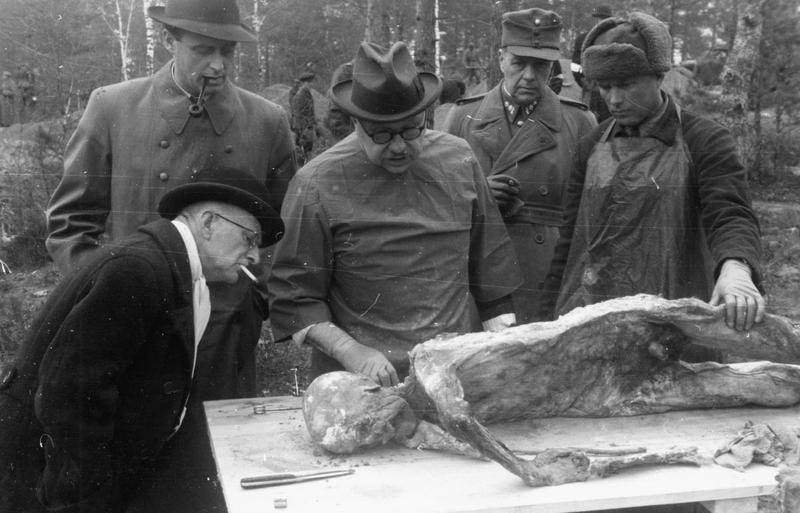 Representatives from the Polish government went to the site of the massacre and determined that the Soviets were indeed responsible, but U.S. and British officials did not want to risk losing the Soviets as an ally against the Nazis. Poland thus agreed to blame Germany for the Katyn massacre.

The Soviets would even boldly add the Katyn massacre to the list of Nazi atrocities committed during the war at the Nuremberg trials.

Recollections Of A Witness

Col. John H. Van Vliet, an American POW, was taken to Katyn in 1943 by the Nazis in order to witness the aftermath of the atrocities committed by the Soviets. In his official report, Van Vliet recalled: “A sickly-sweet odor of decaying bodies was everywhere. At the graves it was nearly overpowering.”

“We followed our guide right into each of the graves — stepping on bodies that were piled like cordwood, face down usually, to a depth of about 5 to 7 bodies covered with about 5 feet of earth.” 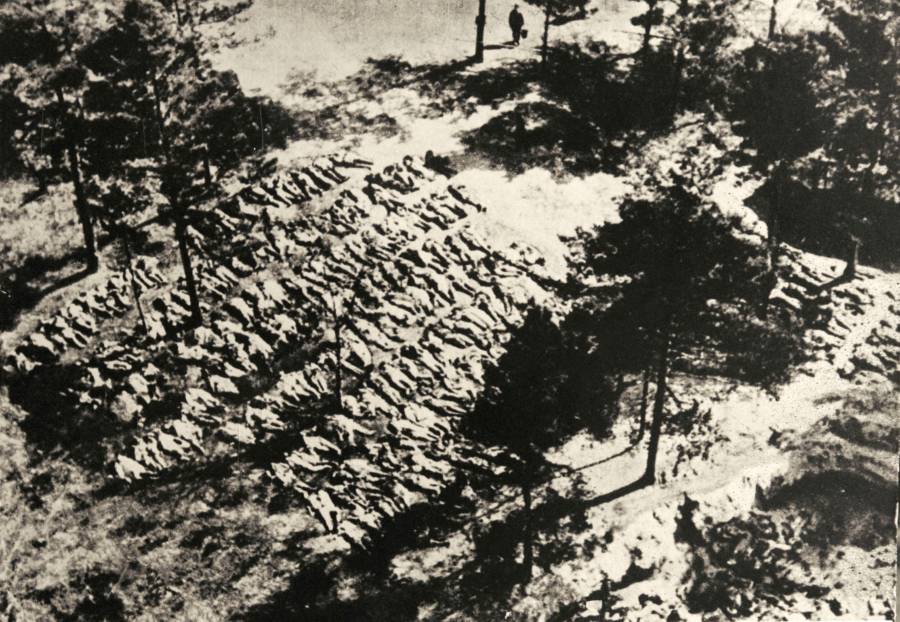 Wojtek Laski/Getty ImagesThe bodies of the Polish officers in mass graves. All were shot in the back of the head execution-style.

Van Vliet became convinced through his investigation that the bodies in this mass grave were indeed Polish officers and were not the product of some elaborate staging by the Nazis. The boots and articles the massacred men wore were of high quality and fit the victims so well that they must have been made for them.

But the Allied powers would accept the USSR’s version of events at the Katyn massacre up until the fall of the Soviet Union itself in 1991. 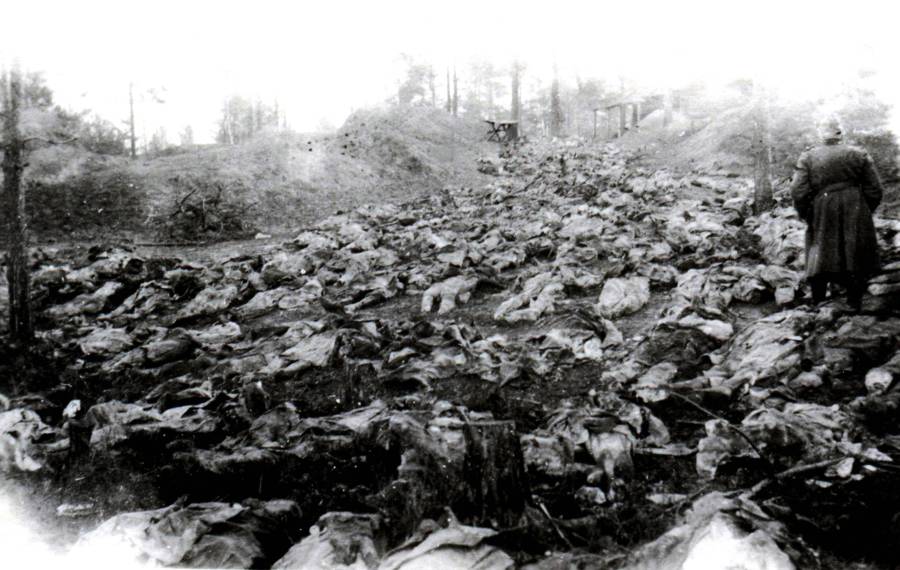 Universal History Archive/Getty ImagesPhoto from the 1943 exhumation of a mass grave of polish officers.

The Truth About The Katyn Massacre Comes To Light

The investigations into the Katyn massacre continued in spurts and starts, but it wasn’t until 2012 that any form of closure was met.

While in the early ’90s Gorbachev’s successor Boris Yeltsin did take Stalin’s execution order to Warsaw to formally apologize on behalf of his country, it was not until a European Court of Human Rights ruling in 2012 that Katyn was officially recognized as a Soviet war crime.

Ruling in favor of the relatives of the victims of the killings, the court found that those families “suffered a double trauma: losing their relatives in the war and not being allowed to learn the truth about their death for more than 50 years.” 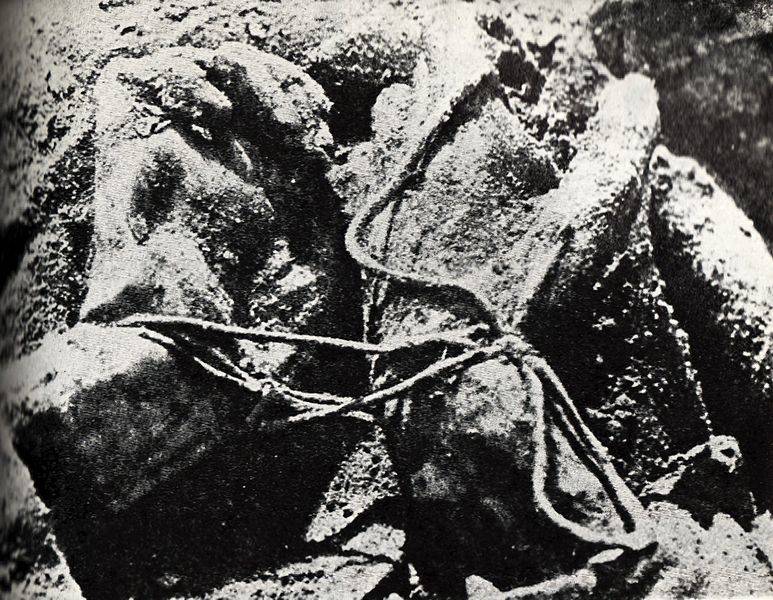 Wikimedia CommonsThe true story of the Katyn Massacre was hidden for decades.

The Katyn massacre festered like an open sore for decades between Russia and Poland. Relations didn’t improve after a second Polish tragedy occurred near the Katyn forest when a group of the country’s military and political elite, including President Lech Kaczynski, went down in a plane crash near there. The group was en route to celebrate the 70th anniversary of the Katyn massacre. 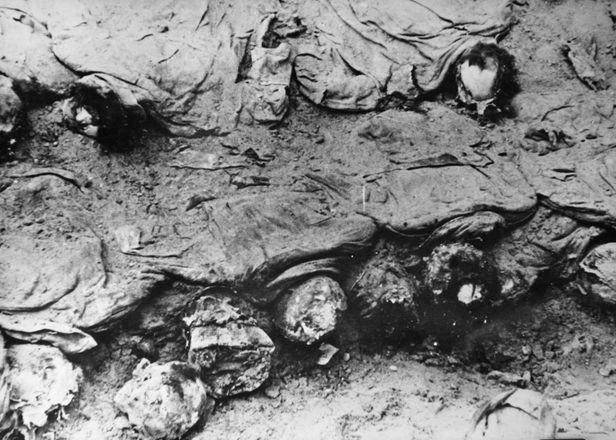 Wikimedia CommonsVictims of the Katyn massacre.

However, commemorations of the crime have popped up around the world from London to New Jersey. Finally, the world is determined never to forget the haunting period when 22,000 lives were snuffed out in the Katyn massacre.

After this look at the Katyn massacre, discover the stories of other historical atrocities like the My Lai Massacre during the Vietnam War or the Massacre at Wounded Knee.