"Chimpanzees eat insects, but we did not know that they catch and use them to treat their wounds." 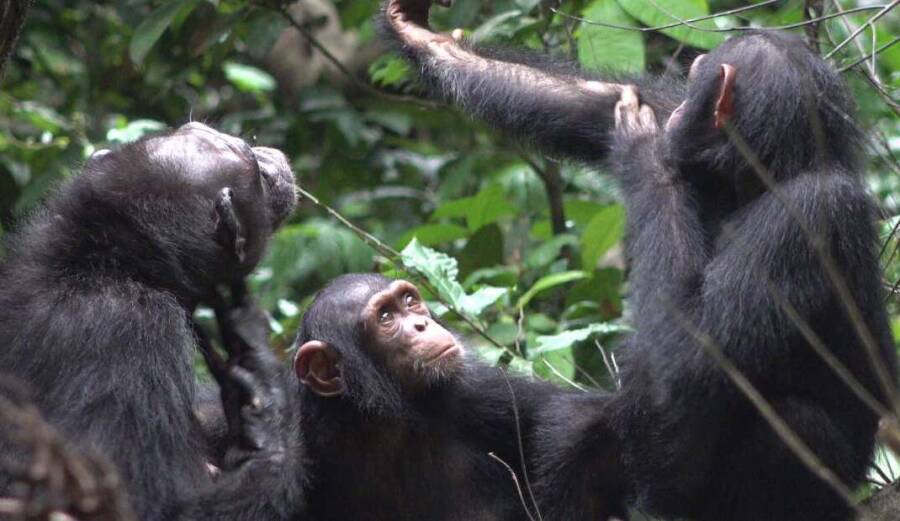 Ozouga Chimpanzee ProjectThe study involved monitoring a group of 45 chimpanzees over the course of 15 months.

From bears and deer to pregnant elephants, the world is flush with animals that can treat themselves for various medical issues. While chimpanzees have long been noted to eat leaves that protect their guts from parasites, they’ve now been observed treating their wounds with insects — for the very first time.

According to CNN, this unprecedented discovery was made at Loango National Park in Gabon in 2019. The study was conducted by the Ozouga Chimpanzee Project and German researchers from the University of Osnabrück (UO) and involved a community of 45 chimps that were monitored over the course of 15 months.

As published in the Current Biology journal, the project initially aimed to explore the relationships between chimps and how they hunted. This rapidly changed when experts spotted individual specimens applying ground-up insects onto their own wounds and those of others in a remarkable act of medical treatment.

“Chimpanzees eat insects but we did not know that they catch and use them to treat their wounds,” said study author Simone Pika. “Hence, they not only have an understanding of their food species but probably also about characteristics of other animal species that help to act against injuries.” 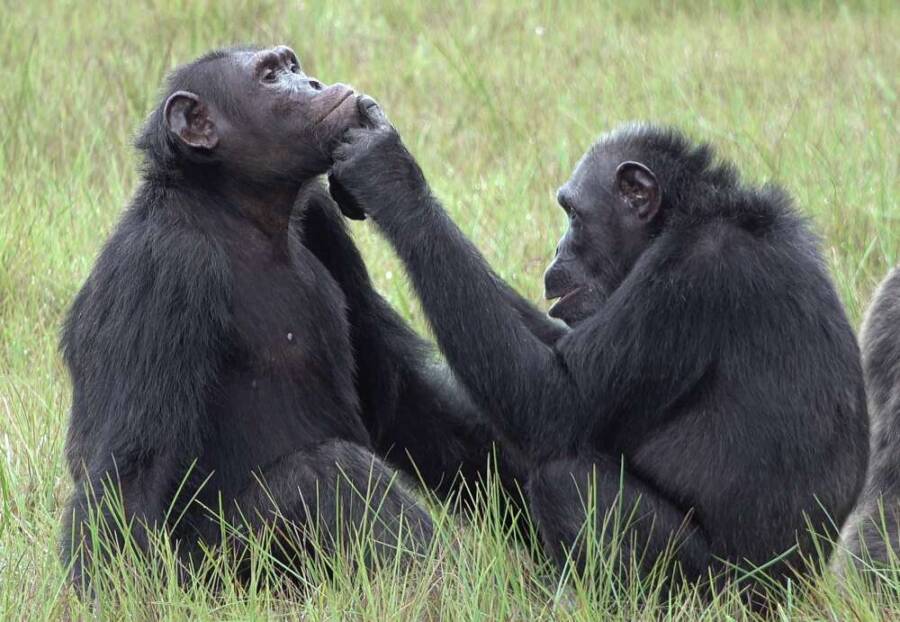 Ozouga Chimpanzee ProjectResearchers spotted 19 instances of self-application and three instances of chimpanzees helping each other.

Fortunately for the world at large, the researchers captured remarkable footage of this behavior which only complemented their detailed study. According to The Washington Post, they recorded 19 instances of chimps applying insects to their own wounds and three instances of them rubbing the bugs onto others.

Alessandra Mascaro, a volunteer with the Ozouga Chimpanzee Project, vividly recalls the first time it happened. According to IFL Science, a female chimp named Suzee realized that her son Sia had suffered a wound on his foot. She then grabbed something out of thin air and placed it between her lips.

“In the video, you can see that Suzee is first looking at the foot of her son, and then it’s as if she is thinking, ‘What could I do?’ and then she looks up, sees the insect, and catches it for her son.” 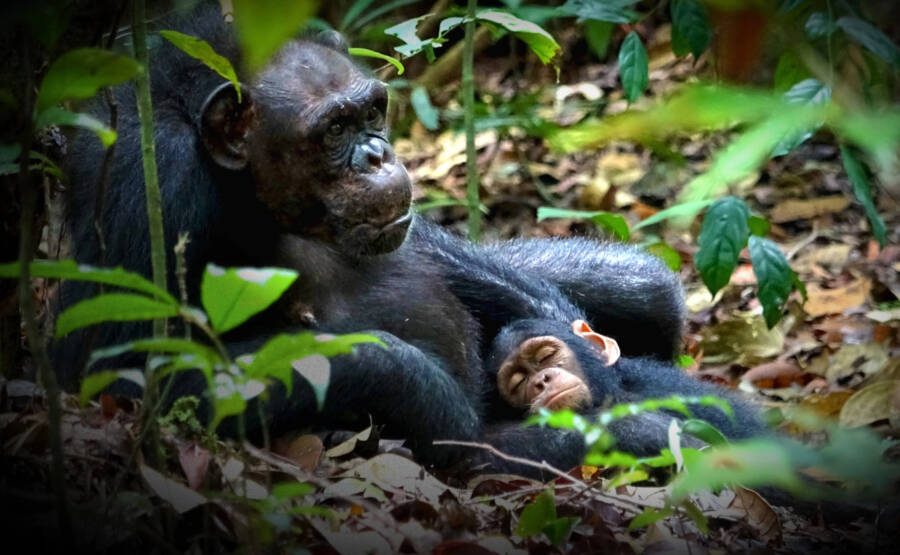 Ozouga Chimpanzee ProjectOne instance saw an adult female apply an insect to the foot wound of her son.

The next week, doctoral student Lara Southern spotted an adult male named Freddy doing the exact same thing. Soon after, an adult female named Carol was observed snatching an insect before applying it to the shin laceration on an adult male named Littlegrey — suggesting this repeated behavior was no anomaly.

The team observed a clear pattern that involved the chimps first catching an insect, immobilizing it by putting it between their lips, and then placing it onto a wound and rubbing it around. While the particular species of insect they used has yet to be identified, the researchers believe it likely has “soothing properties” for pain relief.

“Our observations provide the first evidence that chimpanzees regularly capture insects and apply them onto open wounds,” said Tobias Deschner, a primatologist with the project. “We now aim to investigate the potential beneficial consequences of such a surprising behavior.” 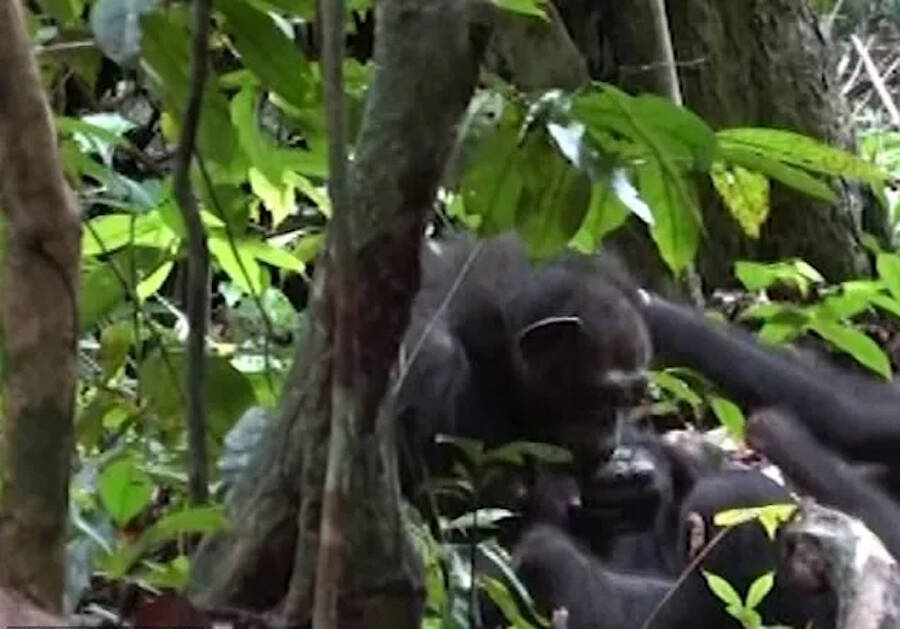 It’s important to note that non-nutritional plants have long been consumed by various animals for a variety of reasons. Pregnant elephants in Kenya, for instance, eat certain leaves to induce delivery. Bears and deer have long been known to eat medicinal plants, as well, and chimpanzees themselves are aware of their use.

This latest study is potential evidence of pro-social behavior in chimps. According to the study, this remarkable discovery poses “a problem for evolutionary theory, because it was not immediately clear why organisms might help others in the face of selection operating in the interest of self.”

After reading about chimps medicating themselves with bugs, learn about the survey concluding that there are more gorillas and chimps than we thought. Then, read about Ham the chimp, the animal astronaut who changed history.