The sinkhole in Guangxi Zhuang Autonomous Region plunges more than 600 feet into the earth and may be home to a host of previously undiscovered creatures.

Though the word “sinkhole” may conjure images of a menacing, seemingly endless pit, the sinkhole recently discovered by explorers in China’s Guangxi Zhuang Autonomous Region seems to be a bastion of life. Some 630 feet deep, 1,004 feet long, and 492 feet wide, it contains “ancient trees” and “shade plants,” according to the Xinhua news agency.

Chen Lixin, the leader of the cave exploration team, told the news agency that the trees are about 130 feet high, while the plants are about shoulder height. Lixin also told Live Science that the sinkhole probably contains undiscovered lifeforms.

“I wouldn’t be surprised to know that there are species found in these caves that have never been reported or described by science until now,” he said. He and his team rappelled into the sinkhole on May 6 and found three caves alongside the forest which may hint at the sinkhole’s evolution. 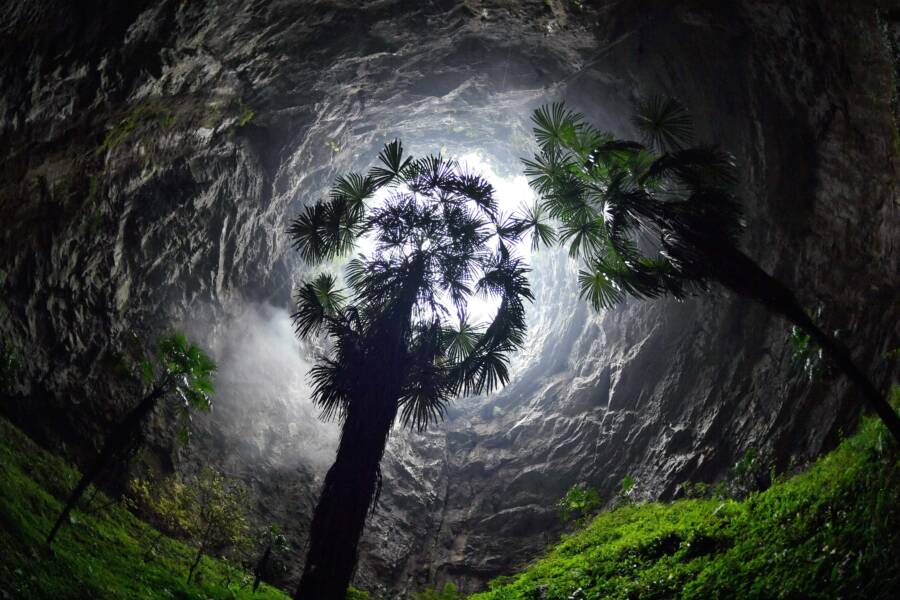 Song Wen/Xinhua via GettyA different Chinese sinkhole with a forest inside, this one located in Luoquanyan Village in Xuan’en County, Enshi Tujia and Miao Autonomous Prefecture, in central China’s Hubei Province.

The find is certainly spectacular — but not unique. Giant sinkholes, called Tiankeng or “heavenly pits,” are commonly found in China, especially in the Guangxi Zhuang Autonomous Region. According to Newsweek, this is the 30th such sinkhole discovered in the area. In 2019, some 19 sinkholes were even discovered in the same region, by the same team of cave explorers.

That’s because southern China has karst topography, a landscape that’s especially susceptible to the formation of sinkholes and caves. As rain falls, it accumulates carbon dioxide and becomes more acidic, which eats through the bedrock. Eventually, it creates a chasm. And when the surface collapses into the chasm, it creates a sinkhole.

George Veni, the executive director of the National Cave and Karst Research Institute (NCKRI) in the U.S, told Live Science that the sinkhole discovered in Guangxi Zhuang Autonomous Region is “cool news.” He also explained that sinkholes in China can be especially large and dramatic.

“Because of local differences in geology, climate, and other factors, the way karst appears at the surface can be dramatically different,” he told Live Science. “So in China you have this incredibly visually spectacular karst with enormous sinkholes and giant cave entrances and so forth.”

In other parts of the world, Veni told Live Science, “you walk out on the karst and you really don’t notice anything. Sinkholes might be quite subdued, only a meter or two in diameter. Cave entrances might be very small, so you have to squeeze your way into them.”

In addition to China, Mexico and Papua New Guinea are also known to have large sinkholes. But they also exist in places like the United States which, according to Live Science, has about 20 percent karst topography. 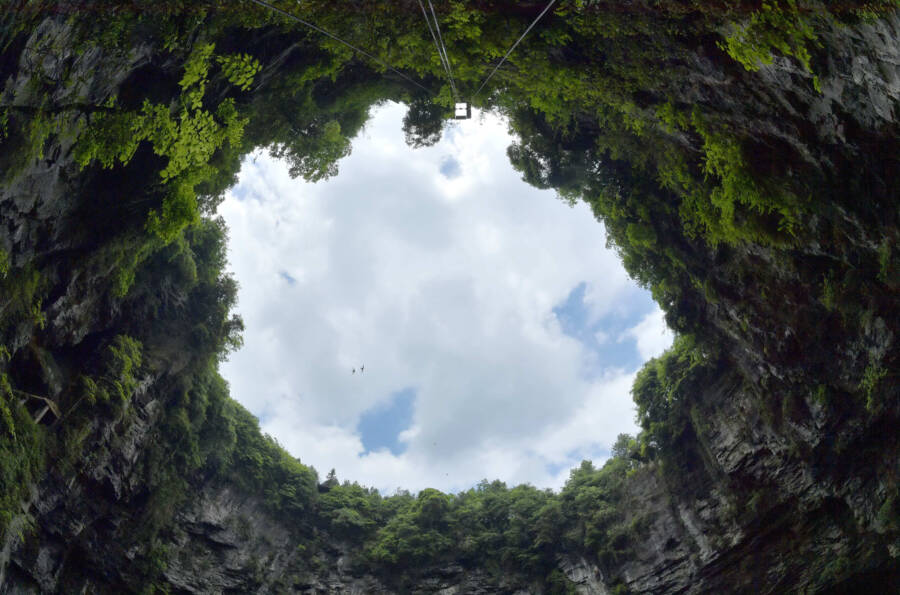 Xinhua/Song Wen via Getty ImagesThe view from the bottom of another Chinese sinkhole (not the one most recently discovered) showing abundant plant life.

Though they may appear terrifying, sinkholes can in fact serve an important purpose. Veni explained to Live Science that many contain deep stores of underground water — or karst aquifers. Some 700 million people get their water from aquifers like these but, despite their depth, they’re still in danger of pollution.

For now, the sinkhole discovered in the Guangxi Zhuang Autonomous Region remains a startling wonder — and yet another reminder of just how many natural wonders are scattered all around the world, just waiting to be found.

After reading about the sinkhole forest discovered in China, discover the story behind the Jordanian sinkhole dubbed the “Well of Hell.” Or, learn about the dozens of sinkholes that opened up in Croatian villages following an earthquake.