How The Chinese Massacre Of 1871 Became One Of The Largest Lynchings In U.S. History

By the time the Chinese Massacre of 1871 was finished, 17 Chinese men and boys were dead. Not a single person involved would be held responsible. 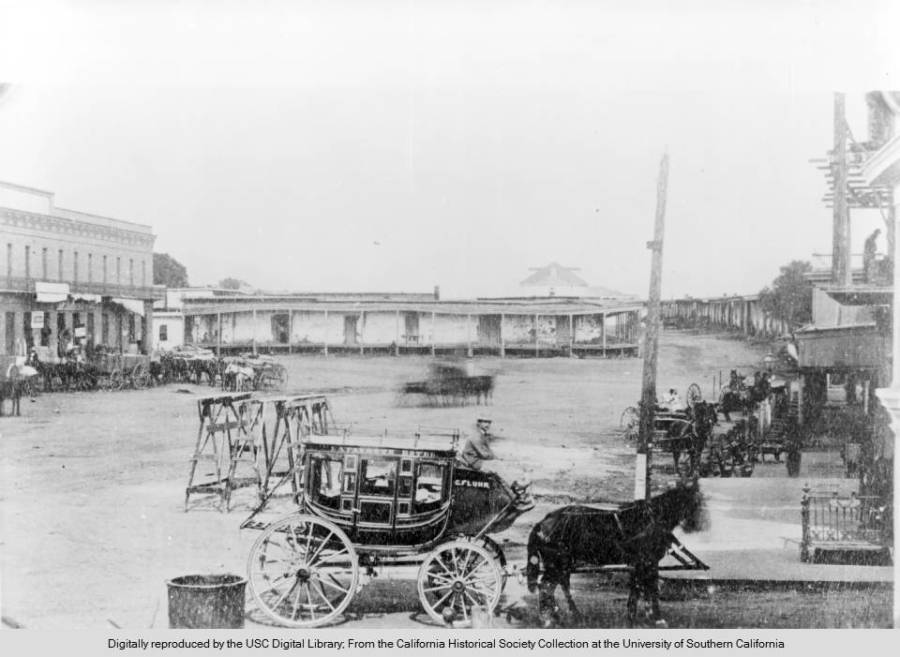 California Historical SocietyImage of Old Chinatown neighborhood, circa 1875, where the Chinese massacre transpired.

In 1871, the city of angels had a population of 6,000 people and only six law enforcement officials. According to the U.S. census, the Chinese population was only about three percent of the city’s entire population — roughly 172 people.

The majority of the Chinese lived on a strip of land called Negro Alley which was considered the red-light district of Los Angeles, an area known for saloons, gambling parlors, and brothels. It was also infamous for enduring one murder per day on average.

During the 1850s and early 1860s, the general attitude toward Chinese immigrants was one of tolerance. However, this attitude drastically shifted in 1869 when the Los Angeles News and The Los Angeles Star began running harsh editorials that condemned Chinese immigration and denounced the Chinese as being inferior and immoral. 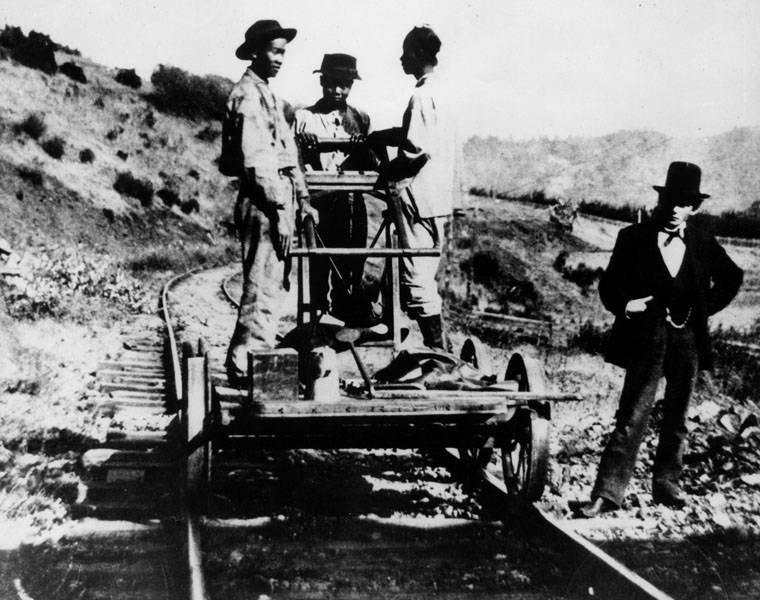 This significant change in media coverage resulted in an increase of racially motivated attacks against the Chinese. By October 1871, tensions were at an all-time high in Negro Alley. Two rival Chinese factions had been at war against each other for several days and the violence among the two gangs came to a head with the kidnapping of Yut Ho.

Yut Ho belonged to the Yuen gang and she had been kidnapped with the intent of being sold into marriage. Considering that Yut Ho was already married, this presented a bit of an issue.

The kidnappers of Yut Ho were led by a rival gang leader, Yo Hing, who had close connections with the powers that be in Los Angeles. The Yuen gang was led by a shopkeeper named Sam Yuen. In an effort to rescue Yut Ho, Yuen hired a small number of hit men from San Francisco to return her safely. One of these men was Yut Ho’s own brother, Ah Choy. After arriving in Los Angeles, Choy spotted Yo Hing and fired several shots at the infamous gang leader.

Hing escaped without any injury and quickly secured a warrant for Choy, who would be arrested weeks later. Choy’s bail was set at the staggering sum of two thousand dollars which Yuen paid from his own small fortune.

The police confirmed that the leader stored his hidden wealth in a locked trunk at his shop. To go along with this, news started circulating about Yuen’s funds, attracting unwanted attention for the shopkeeper. There is also strong evidence that the police cooperated with the Hing faction to rob Yuen of his personal fortune.

The Night Of The Chinese Massacre 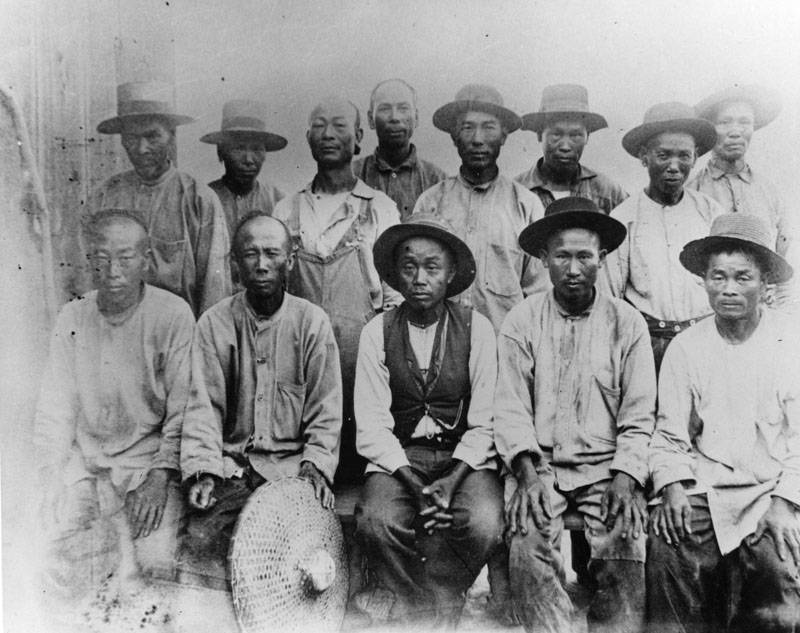 On the night of the massacre, Officer Jesus Bilderrain was drinking at a nearby tavern when a shot rang out into the night. Upon hearing the disturbance, Bilderrain ran out toward Negro Alley and saw Choy bleeding on the street from a neck wound. Out of the corner of his eye, he spotted a group of Chinese men running away from the crime scene. He ran after them into a dark building and was shot upon entering.

Bilderrain managed to dash out of the building with a shoulder wound, blowing his whistle to alert more policemen. Robert Thompson, the owner of the town’s most popular saloon, the Blue Wing, answered the urgent call and came to his aid. At the time, Thompson’s assistance was normal as vigilante justice was exceedingly common. In fact, by the 1850s and 1860s, thirty-five people had been lynched by vigilance committees in Los Angeles.

As Thompson approached the door of the building that Bildderrain escaped from, he was warned by a part-time cop that the men inside were heavily armed. Thompson retorted, “I’ll look out for that” and fired his gun blindly into the darkness. However, a returning barrage of gunfire found him, striking him fatally in the chest. An hour later, he was dead with his supposed last words being: “I am killed.”

When news of Thompson’s untimely end was announced, a mob of five hundred people gathered in Negro Alley. They rushed over to the dilapidated building and laid siege to the Chinese gangsters hidden inside.

Held at bay by the gunfire, the mob began to climb onto the roof, using axes to bludgeon holes into the tar covering. Then the mob took aim and started firing into the rooms below. Another portion of the mob had managed to batter open a second door with a large rock. At this point in the night, the Chinese gangsters had given up on escape.

The ensuing violence would soon shock the world. In the flickering light and shadow of the streetlights, armed men began dragging the Chinese gangsters to constructed gallows in downtown Los Angeles. A short while later, bodies were already swinging from two upturned wagons on Commercial Street as well as the crossbar of the Tomlinson Corral.

The armed group soon used the porch roof of John Goller’s wagon shop as another place to lynch some of the doomed men. Goller vehemently objected to the usage of his store as the location of a lynching, crying out that there were young children in the building. A rioter shoved a gun to Goller’s face and told him, “Dry up, you son of a bitch.”

Men climbed onto the roof of the wagon shop and began to sing in glee as the victims began to be hoisted up. A woman that ran a boardinghouse near Goller’s shop volunteered clotheslines to be used as nooses. The clotheslines proved to be too weak and rope from a dry goods stores was used instead.

Among the Chinese victims was Dr. Gene Tong, a well-respected and eminent doctor. As Tong was dragged along the streets of Los Angeles, he begged for his life. He even attempted to offer three thousand dollars in gold and his diamond wedding ring. His assailants silenced Tong with a bullet through the mouth. They then proceeded to cut off his finger with the wedding ring before hanging Dr. Tong with the other victims. 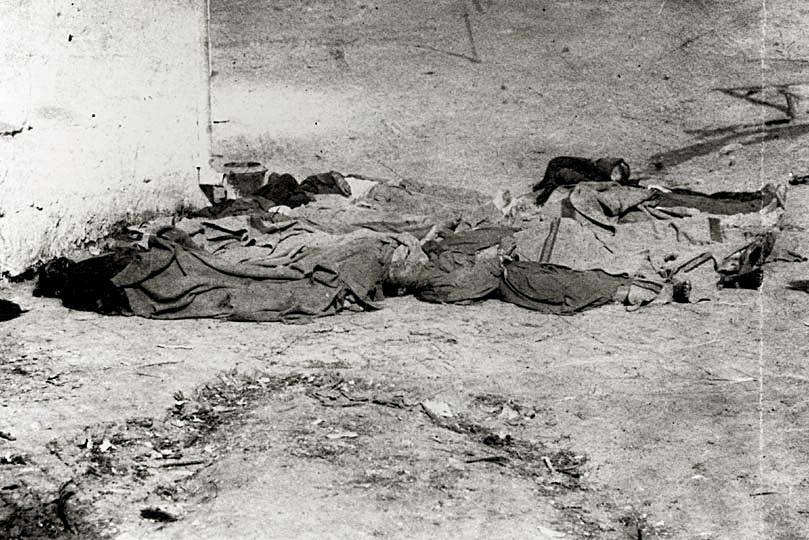 Los Angeles Public LibraryBodies of the victims are laid out in a jail yard after the Chinese Massacre of 1871.

The next morning, there were seventeen bodies laid out in the jail yard. Only one of the victims had been involved in the notorious gunfight from the previous night. It was one of the largest mass lynchings in American history.

Though there were 25 indictments for the murder of the 17 Chinese victims, only 10 men stood trial. Eight rioters were convicted on manslaughter charges, but they were overturned and the defendants were never re-tried. The victims of this massacre and their families never received any modicum of justice.

Unfortunately, the Chinese massacre did little to improve the treatment of the Chinese community in Los Angeles. Instead, anti-Chinese sentiments continued to grow in an upward trend, as The Anti-Coolie club was created in 1876, counting a significant number of powerful citizens among its members. The newspapers also resumed their slanderous editorials against the Chinese community.

A mere two years later, a federal district court in California ruled that the Chinese were ineligible for citizenship. This anti-Chinese legislation culminated in the Chinese Exclusion Act of 1882, which halted the immigration of Chinese laborers and barred the Chinese from becoming naturalized citizens on the federal level.