Inside The Death Of Chris Benoit, The Professional Wrestler Who Killed His Family And Then Himself

One of WWE's most iconic wrestlers of the early 2000s, Chris Benoit died by suicide in 2007 after he strangled his wife to death and suffocated his young son at his home. 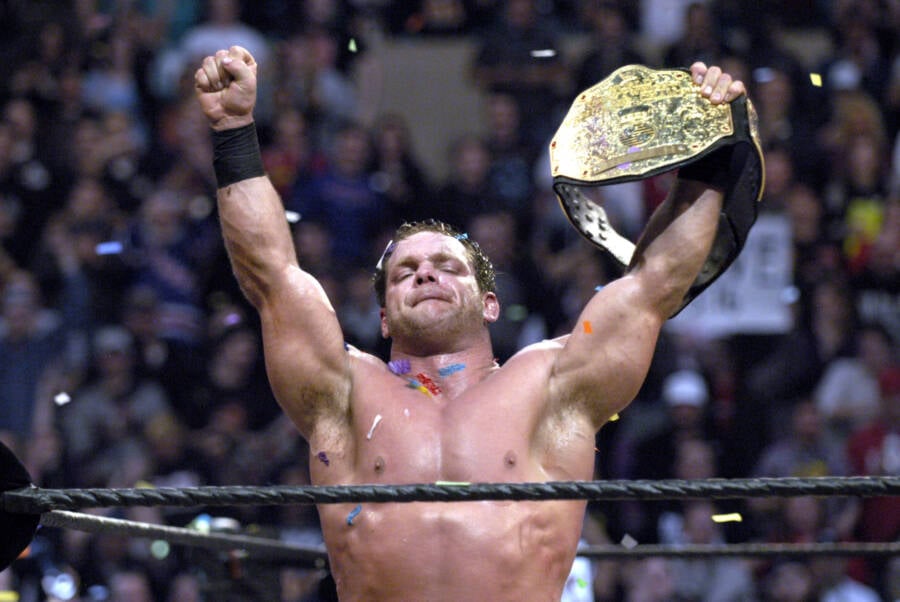 Kevin Mazur/WireImageChris Benoit’s death has profoundly impacted his legacy as a professional wrestler.

Before Chris Benoit’s death, he seemed to have it all. The professional wrestler known as the “Canadian Crippler” was world-famous and beloved by his fans. But on June 24, 2007, the wrestler killed his family, then himself. Chris Benoit’s murder of his wife and young son and suicide shocked pro-wrestling.

Benoit’s death was a gruesome conclusion to an otherwise extraordinary life. The wrestler, born in Quebec, had steadily climbed the ranks of pro wrestling over 22 years. After starting his career in Canada, he wrestled in Japan before joining Vince McMahon’s World Wrestling Entertainment (WWE) in 2000.

Benoit was one of WWE’s stars, with 22 championships under his belt and a bevy of loyal fans. But everything changed over three days in June 2007 when, unbeknownst to the world, Benoit murdered his wife Nancy, then his seven-year-old son Daniel, before taking his own life.

The murder-suicide shocked the wrestling world and beyond. It prompted questions about WWE’s drug testing policy, Benoit’s steroid use, and how his long wrestling career might have impacted his brain.

Though some answers emerged after Chris Benoit’s death, the world would never know what motivated the bloody end of the wrestler who killed his family and then himself.

Born on May 21, 1967, in Quebec, Canada, Christopher Michael Benoit was drawn to wrestling at a young age. As his father later told ABC News, Benoit wanted to wrestle even as a young boy.

“He was pretty much driven from the age of 12, 13 to get in the wrestling industry,” his father, Mike Benoit, explained. “Chris lifted weights every day. He was 13 years old… he was breaking records in high school in our basement.” 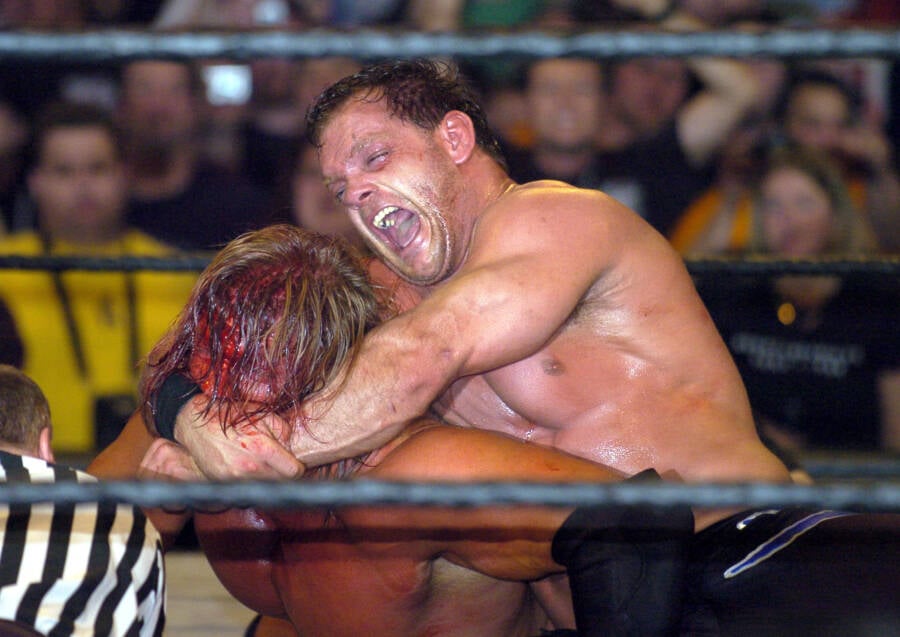 Kevin Mazur/WireImageChris Benoit became a highly respected wrestler, especially for his technical skills in the ring.

Along the way, Benoit became a highly regarded wrestler. He won 22 championships and was frequently praised for his prowess in the ring, especially his technical skill. But his success came at a cost. Benoit took steroids and testosterone in defiance of WWE policy, and his opponents frequently struck him in the head with heavy objects.

“Cables, ladders, chairs… the props they were using when they were getting hit in the head. It’s a real chair, it’s a steel chair,” his father told ABC News.

Though Benoit seemed to be able to function normally outside the ring, marrying twice and having three children, he sometimes displayed violent behavior. His second wife, Nancy, filed for divorce shortly after they wed in 2000. According to Sports Keeda, Nancy claimed that Chris Benoit could get unpredictable when he lost his temper, and she worried he’d hurt her or their son, Daniel. But Nancy later withdrew her divorce petition.

As such, it was a shock when the world learned that Chris Benoit died by suicide at 40 years old — and that he’d taken Nancy and Daniel with him.

Chris Benoit’s Death And The Murder Of His Family 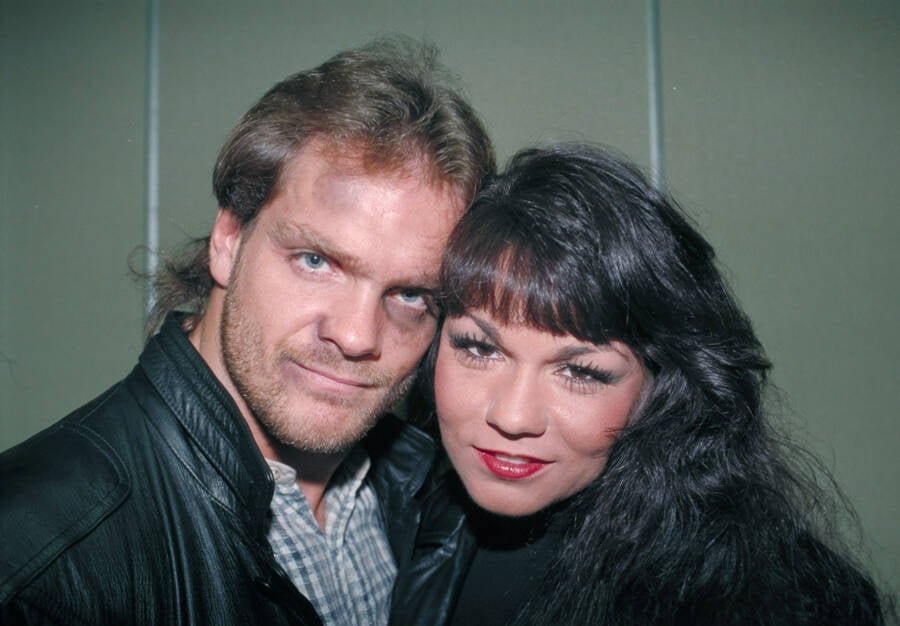 George Napolitano/FilmMagicChris Benoit and his wife Nancy Benoit, approximately 11 years before Chris killed her and their son, then took his own life.

On June 24, 2007, Chris Benoit was scheduled to appear at a pay-per-view fight called Vengeance: Night of Champions, in Houston, Texas, where he was expected to win the Extreme Championship Wrestling World Championship. But Benoit never showed up.

That same day, his friend Chavo Guerrero, the nephew of the late wrestler Eddie Guerrero, received a strange message from the wrestler. Benoit had written: “The dogs are in the enclosed pool area, and the back door is open,” and texted Guerrero his address.

Sports Keeda reports that Benoit’s messages didn’t cause Guerrero any concern until he learned that Benoit hadn’t shown up at the pay-per-view fight. Then, he alerted WWE authorities, who called the police. They went to Benoit’s house in Fayetteville, Georgia, which he shared with Nancy and seven-year-old Daniel, and found a gruesome scene. All three were dead.

According to The New York Times, Nancy was found with her hands and feet tied and with blood under her head. Daniel was found in bed. And Chris Benoit was found hanging from a weight machine cable in his home gym.

Investigators soon determined that as early as June 22, 2007, Chris Benoit murdered Nancy and Daniel before killing himself. Nancy was strangled first, possibly in a rage. Next, it appears that Benoit gave his son Xanax, then smothered him.

Then, before Chris Benoit died by suicide, he did some online searches. ABC News reports that he looked for stories about the prophet Elijah, who once raised a boy from the dead. Then, Benoit searched for the easiest way a person could break their neck.

After placing Bibles next to Nancy and Daniel’s bodies, Chris Benoit went into the family’s home gym. According to Talk Sports, he tied a cable around his neck, attached it to the highest weight on a weight machine, and let go.

However, the investigation into why the wrestler’s life had come to such a grisly end was just beginning.

What Led A Pro Wrestler To Kill His Family? 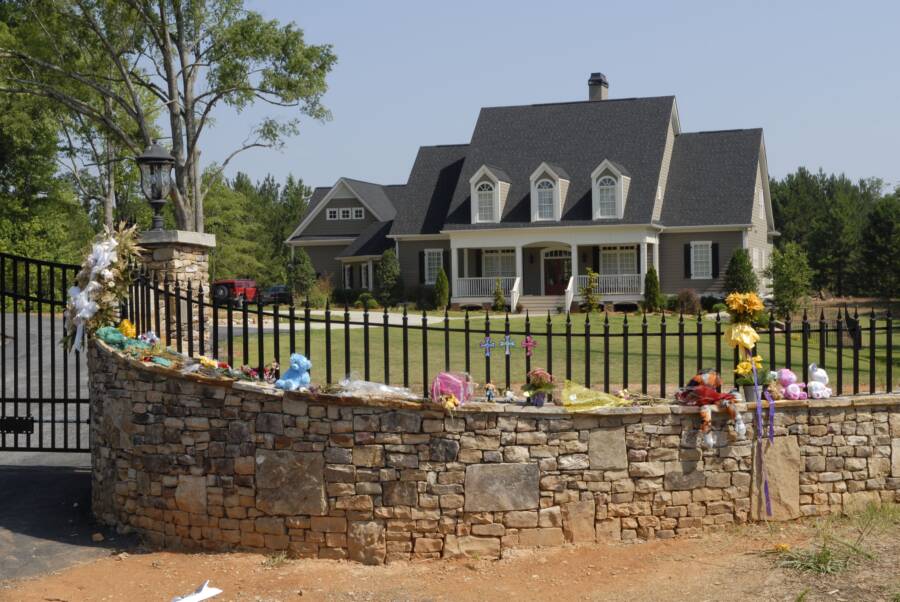 Questions swirled in the aftermath of Chris Benoit’s death and the murder of his wife and son. What had driven the wrestler to such a violent act?

Benoit’s autopsy offered some answers. According to Esquire, the wrestler had a severely damaged brain and 10 times the amount of normal testosterone. Benoit also had a heart so enlarged it probably would have eventually killed him, a common occurrence among athletes who abuse steroids and growth hormones.

But though Benoit’s toxicology report caused a “media frenzy,” with many pointing to “roid rage” as a potential reason why the wrestler had killed his family and himself, experts had their doubts.

“This was a murder-suicide spree that lasted over, I believe, a three-day weekend,” Dr. Julian Bailes, who works for West Virginia University’s Health and Science Center, told ABC News. “I don’t think that ‘roid rage,’ which is believed to be a snap judgment… in emotions or actions, I don’t think this is what explains Chris’s behavior.”

Instead, some experts believed that Benoit’s brain injuries led the wrestler to kill his family and take his own life. According to West Virginia University, his brain was “so severely damaged it resembled the brain of an 85-year-old Alzheimer’s patient.”

Bailes additionally told ABC News that Benoit’s brain showed evidence of repeated blows to the head, a perhaps obvious conclusion given the violence he’d suffered in the ring.

“Chris’s damage was extensive,” Bailes said. “It was replete across multiple areas of the brain. It remains one the worst we have seen.”

Indeed, some of Benoit’s friends remarked that he’d seemed different before he died. He’d been depressed since his friend, fellow wrestler Eddie Guerrero, died suddenly in 2005. And Benoit had also begun to exhibit odd behavior. Nancy’s sister and pro wrestler Chris Jericho recalled that he would disappear for weeks on end and that he seemed paranoid.

WWE, however, refused to acknowledge that Chris Benoit’s wrestling career had directly led to his death. In a statement to ABC News, the wrestling organization insisted that “Someone with the brain of an 85-year-old with dementia would be unable to keep a traveling work schedule, drive himself to arenas, and perform intricate maneuvers in the ring much less commit a methodical murder-suicide over a 48 hour period.”

The organization promptly erased Benoit from its website, DVDs, and historical references. WWE did, however, change some of its policies. According to Pro Wrestling Stories and Sports Keeda, they implemented a “no chair shots to the head” rule, brought in doctors to supervise matches, and started conducting more thorough drug testing.

As such, though Chris Benoit’s death might have changed pro wrestling for the better, he’s seen as persona non grata in the sport. Deadspin even called him “basically wrestling’s equivalent of Lord Voldemort,” and flatly refuted the idea that he should be honored as a wrestling great down the line. If anyone should be honored, the publication suggests, it’s his murdered wife Nancy, who had a wrestling career of her own for 13 years.

But at least one person continues to defend the wrestler who killed his family. Chris Benoit’s father, Mike, told ABC News that the blame for Chris Benoit’s death lies at the feet of the pro-wrestling industry itself.

“I think if Chris Benoit had been anything other than a professional wrestler… he would still be alive,” Mike Benoit said. “I would like people to have an understanding that the tragedy that took place in 2007 happened because of his career choice.”

After reading about the death of Chris Benoit and his murders, go inside the untimely death of comedian John Candy. Or, discover the disturbing story of Juana Barraza, the pro-wrestler who made a habit out of murdering old ladies.