Chris Kyle is undoubtedly one of the most decorated — and deadliest — snipers in American history. So why did he exaggerate so many of his heroic stories? 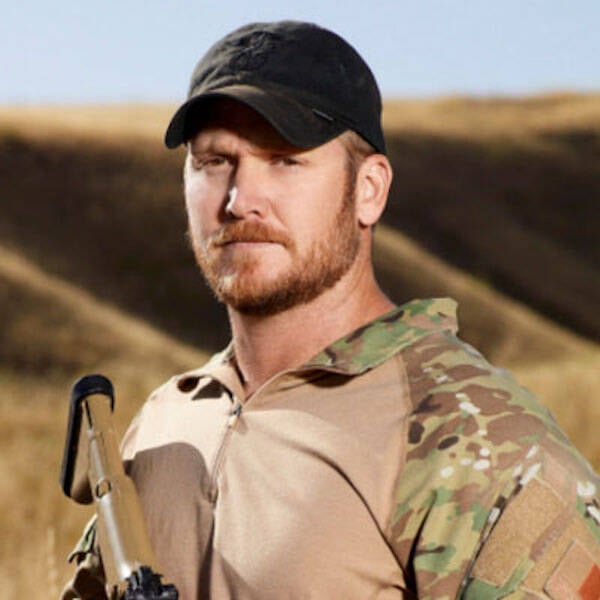 Wikimedia CommonsChris Kyle was killed with his own gun by a veteran he was attempting to mentor at just 38 years old.

Known as the deadliest sniper in American history, Chris Kyle was also a decorated U.S. Navy SEAL who was shot twice during his four tours in the Iraq War. When he returned home, he wrote a book about his experience titled American Sniper, which quickly turned him into a local folk hero.

But despite his celebrity status back home, Chris Kyle drank heavily to quell his insomnia and Post-Traumatic Stress Disorder (PTSD). He finally readjusted to civilian life by helping fellow soldiers to do the same.

Unfortunately, many of his exploits were discovered to be exaggerated, including the number of awards he received and an outlandish story regarding a fight with Minnesota governor and veteran Jesse Ventura.

All this drama came to an abrupt head on Feb. 2, 2013, when Kyle and his friend Chad Littlefield drove 25-year-old U.S. Marine Corps veteran Eddie Ray Routh, who had been diagnosed with schizophrenia and PTSD, to a shooting range in Texas.

There, Routh suddenly grabbed a pistol from Kyle’s collection and fired seven rounds into Littlefield and additional six into Kyle — before driving off.

Chris Kyle’s Years Of Service And Life After Iraq

Born on April 8, 1974, in Odessa, Texas, Christopher Scott Kyle was the eldest of two. He and his brother Jeff were raised like most other children in Texas at the time — with God and nature in mind. Their father Wayne Kenneth Kyle was a deacon who taught Sunday school and frequently took them hunting. 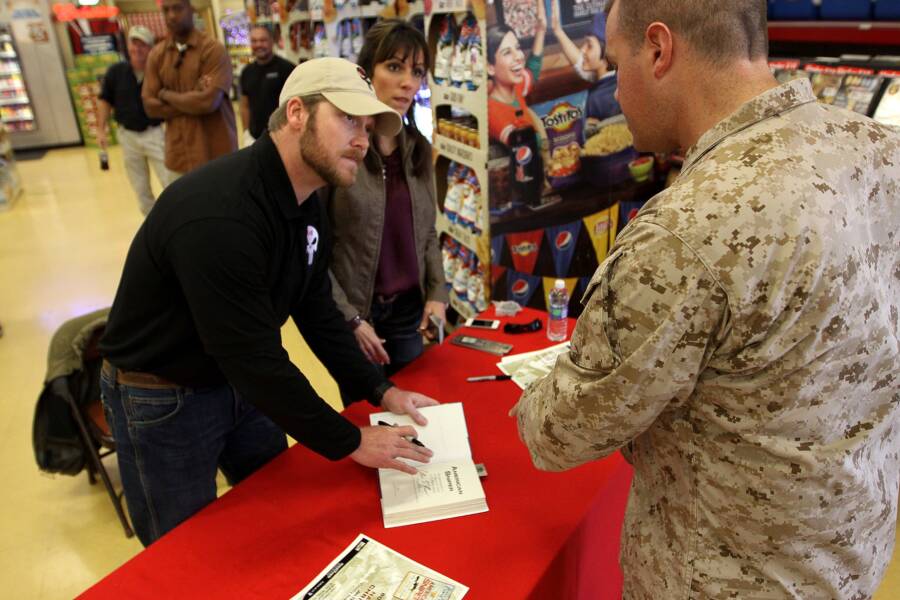 Wikimedia CommonsKyle signing a copy of American Sniper for a fellow soldier.

Given his first rifle at eight years old, Kyle learned to hunt deer, quail, and pheasant while raising 150 cattle on the family ranch.

Kyle later pursued professional bronco riding after graduating high school in 1992, but an injury forced him to quit.

While he studied Ranch and Range Management at Tarleton State University until 1994, Kyle grew curious about serving in the military. Ultimately, a Navy recruiter got Kyle to enlist in the branch on Aug. 5, 1998. After completing Basic Training in Spring 1999, he was determined to become a SEAL.

In 2000, he underwent the grueling six-month training to do so with the Basic Underwater Demolition/Sea, Air, Land (BUDS) unit in California. Graduating in 2001 and assigned to SEAL Team-3, Kyle served four tours in Iraq as a sniper. Honorably discharged in 2009, many lauded his 150 confirmed kills.

Kyle returned home with two gunshot wounds that required knee reconstructive surgery and PTSD. Fortunately, he was able to steady his life, and by 2012, he published his autobiography and started helping veterans like himself.

Over the years of Kyle’s ensuing celebrity — including after his death — the media learned that the sniper had exaggerated some of the claims he made in his book and in the news.

In his book, Kyle claimed to have earned two Silver Stars and five Bronze Stars, but the Navy later acknowledged that he only received one Silver Star and three Bronze Stars.

A subchapter titled “Punching Out Scruff Face” in Kyle’s book also spurred actual legal action against him. In it, Kyle claimed to have been attending a wake on Oct. 12, 2006, at a bar called McP’s in Coronado, California, for U.S. Navy SEAL Michael A. Monsoon who had died in Iraq — when things became violent.

Kyle claimed that this mysterious “Scruff Face” individual told him, “You deserve to lose a few guys.” Kyle wrote that he responded by punching the man as a result. On Jan. 4, 2012, he claimed on The Opie and Anthony Show that the man was none other than Jesse Ventura.

The former Minnesota governor filed a lawsuit within days and charged Kyle with defamation, appropriation, and unjust enrichment. He denied ever meeting Kyle and didn’t drop the suit even when Kyle died. On July 29, 2014, a jury ruled that Kyle’s estate owed Ventura $500,000 for defamation and $1.34 million for unjust enrichment.

Many more false claims emerged, however. Kyle had also reportedly once told his peers that he traveled to New Orleans after Hurricane Katrina to shoot “dozens of armed residents who were contributing to the chaos.”

The New Yorker reporter Nicholas Schmidle tried to corroborate these claims but learned that not a single SEAL from the West Coast had been sent to New Orleans following Katrina.

Furthermore, Kyle once claimed that he shot two men in January 2010 who were trying to steal his truck at a Dallas gas station. Kyle claimed police had let him go because “someone high up in the government” ordered them to. Multiple publications, including The New Yorker, have also failed to corroborate this story. 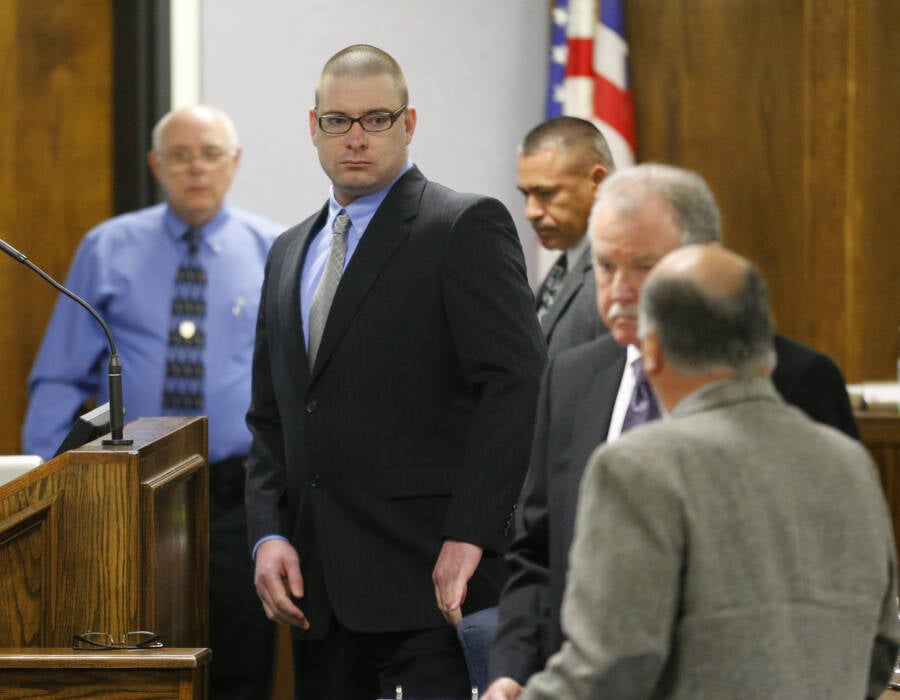 Despite his penchant for exaggeration, Kyle was an outspoken advocate for veterans’ rights.

In 2013, a teacher at Kyle’s children’s school called him to ask for his help. Her son, Eddie Routh, was living with PTSD and severe depression after serving in Iraq and Haiti after the 2010 hurricane.

Prescribed antipsychotics and anti-anxiety medication that treated schizophrenia, Routh also self-medicated with alcohol and marijuana. He also held his girlfriend and her roommate hostage at knifepoint shortly before the killings.

Nonetheless, Kyle and Littlefield — who Kyle knew because their daughters played soccer together — offered to mentor Routh for the day. They arrived at Routh’s home in the early afternoon on Feb. 2, 2013, before getting into Kyle’s truck and heading to the shooting range in Erath County. That’s when the trouble began.

Routh later claimed that Kyle and Littlefield “wouldn’t talk to me” during the drive, and their silence paired with the arsenal of weapons in the truck led Routh to believe that he was about to be killed.

After nearly two hours on the road, they arrived at the shooting range. The grounds spanned 11,000 acres, with the shooting range designed by Kyle himself. They had five pistols, several rifles, and Kyle and Littlefield each had a holstered .45-caliber 1911.

Then, at some point during the shooting session, Routh picked up a 9 mm Sig Sauer P226 MK25 and fired at Littlefield. Then, he grabbed a .45-caliber Springfield. 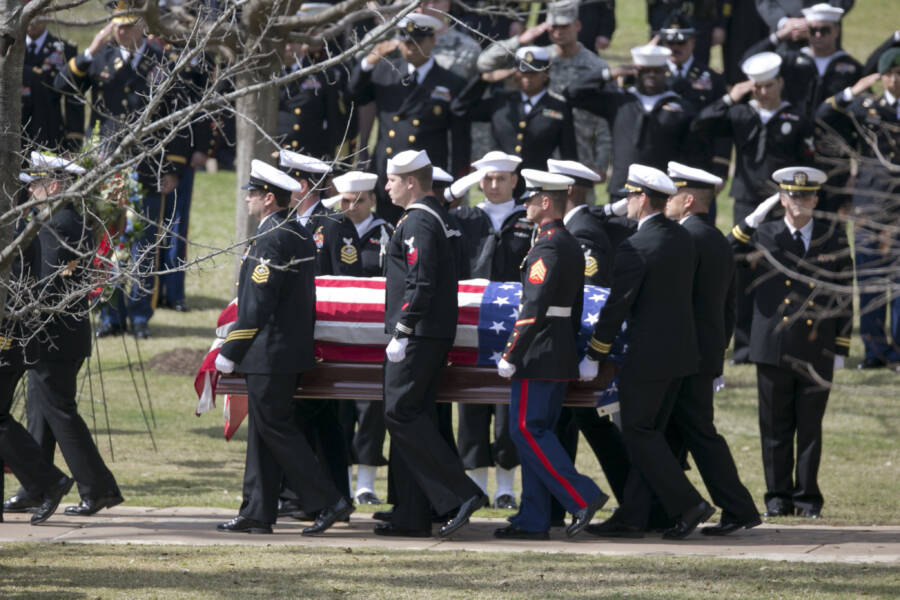 Kyle had no time to unholster his weapon. Routh shot him in the head, shoulder, right arm, and chest six times. Reloading his gun, he grabbed a rifle and left in Kyle’s pickup.

The Aftermath And Trial

Right after the shooting, Routh drove to the home of his sister, Laura Blevins, and told her he had just killed two men. After he showed her the guns he used to do so, she called 911.

When Routh drove home to get his dog that same day, he encountered police. He muttered about the apocalypse and “walking hell on Earth,” and said, “Everybody just wants to barbecue my ass right now.”

Routh confessed to the killings later that night and said the following about Chris Kyle, “If I didn’t take out his soul, he was going to take mine next.”

Routh’s trial at the Erath County District Court in Stephenville, Texas, began on Feb. 11, 2015. He pleaded not guilty by reason of insanity but was ultimately found guilty by the jury of 10 women and two men on February 24. He was sentenced to life without parole.

As for Kyle’s family, they were heartened to see nearly 7,000 people attend his memorial service at the Cowboys Stadium in Dallas, Texas, on Feb. 11, 2013. Perhaps most solemn were the words of his children, which adorned the back page of the program leaflet handed out to attendees.

“I will miss your heat,” his daughter wrote. “I will love you even if you died.”

“I miss you a lot,” his son wrote. “One of the best things that has happened to me is you.”

After learning about Chris Kyle, read about the government cover-up following the death of Pat Tillman, another American soldier. Then, learn about grunge icon Chris Cornell’s death.