In 1955, Claudette Colvin was arrested for refusing to give up her bus seat to a white woman in Alabama — nine months before Rosa Parks.

Rosa Parks became a civil rights icon when she refused to give up her seat to a white passenger on a bus in Montgomery, Alabama on December 1, 1955. But just nine months earlier, a teenager named Claudette Colvin had done the same thing.

On March 2, 1955, Colvin decided to stay in her seat on a bus when she was asked to move for a white woman. The 15-year-old was promptly dragged out to the street by police officers, handcuffed, and thrown in jail. 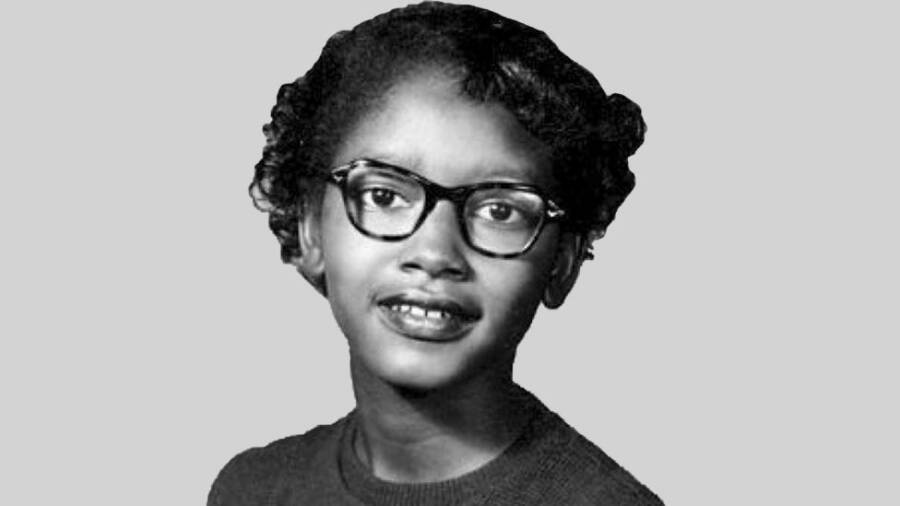 Wikimedia CommonsClaudette Colvin was just 15 when she made her stand.

But her activism didn’t stop there — she later became one of the four female plaintiffs in the court case that overturned Alabama’s bus segregation laws.

Colvin fought for the same cause in the same city as Parks. She even used the same peaceful act of civil disobedience. But while Parks’ name became synonymous with the civil rights movement, Colvin’s was forgotten.

Who Was Claudette Colvin?

Claudette Colvin was born in 1939 in Montgomery, Alabama. She grew up in one of the city’s poorest neighborhoods and focused most of her energy on school — studying hard and earning mostly A’s.

But on a fateful day in 1955, Colvin decided to fight for her civil rights. Then 15 years old, she had been riding home from school when a white woman stepped on the crowded bus. The driver ordered Colvin to go stand in the back, even though two other seats in Colvin’s row were empty.

“If she sat down in the same row as me, it meant I was as good as her,” Colvin later told The New York Times.

The police were called and they dragged a crying Colvin off the bus. One officer kicked her along the way.

“I paid my fare, it’s my constitutional right,” the teen, who had been studying Jim Crow laws in school, yelled in a squeaky voice.

On the way to the police station, the cops called her a “thing” and a “n*gger b*tch” and guessed at her bra size. She sat handcuffed between them, reciting the Lord’s Prayer and the 23rd Psalm in her head.

Claudette Colvin assumed she’d be taken to the juvenile court because of her age, but she was ultimately taken to the adult jail.

She said, “Someone led me straight to a cell without giving me any chance to make a phone call. He opened the door and told me to get inside. He shut it hard behind me and turned the key. The lock fell into place with a heavy sound. It was the worst sound I ever heard. It sounded final.”

After her pastor bailed her out, Black leaders like Martin Luther King Jr. praised her and began to share her story. Before long, more than 100 letters of support flooded into Montgomery. Colvin said she felt proud.

Why Didn’t She Become Famous?

At first, Claudette Colvin’s arrest was seen as a huge deal among civil rights leaders — who wanted to use her case to further their cause. But ultimately the NAACP decided that the teen wouldn’t serve as an effective vessel to represent the movement at the national level. 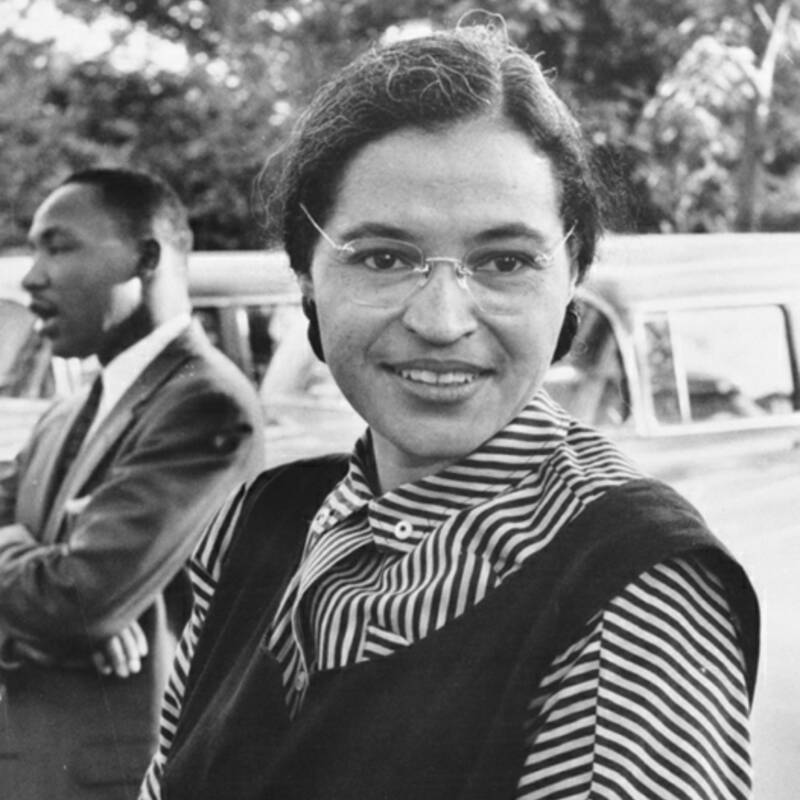 Public DomainThe NAACP threw their weight behind Rosa Parks, not Colvin, who refused to move to the back of a Montgomery bus nine months later.

“They worried they couldn’t win with her,” said Phillip Hoose, who wrote the 2009 book Claudette Colvin: Twice Toward Justice. “Words like ‘mouthy,’ ’emotional,’ and ‘feisty’ were used to describe her.”

Parks, on the other hand, was praised for having a “stoic” personality and “natural gravitas” — and she also had much more experience working with the civil rights movement.

Colvin suspected that her darker skin may have also had something to do with the decision. However, others have suggested that Colvin becoming pregnant after the incident was what caused her to be passed over.

But even though Claudette Colvin never reached the same level of fame as Rosa Parks, she held no animosity toward her.

“I know in my heart that she was the right person,” Colvin said of Parks, who used to make Colvin peanut butter crackers and invite her to sleepovers at her apartment back when they were both living in Montgomery.

And as one might expect, Parks loved Colvin’s story about her bus protest — and she would reportedly make her tell it “a million times.”

Colvin left Montgomery for New York soon after her arrest in search of anonymity. However, she did stay in her hometown while testifying in Browder v. Gayle, the landmark case that found bus segregation to be unconstitutional. The three other plaintiffs in that case were also women who had been discriminated against by bus drivers — much like Colvin.

“The real reality of the movement was often young people and often more than 50 percent women,” historian David Garrow told NPR. “It’s an important reminder that crucial change is often ignited by very plain, unremarkable people who then disappear.”

The Legacy Of Claudette Colvin 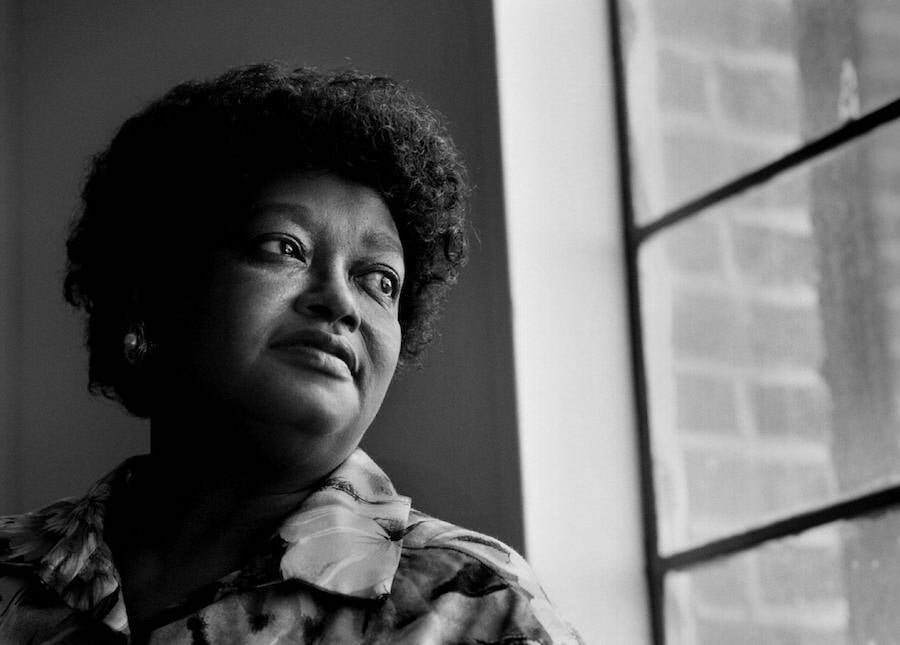 Claudette Colvin did not disappear — but she did live a relatively quiet life after her bus protest.

After moving to New York, she worked as a nurse’s aide in a Manhattan nursing home for 35 years. She never got married, and her first son sadly died at age 37. Her second son is now an accountant in Atlanta. Now retired, she’s a fan of Alicia Keys and Who Wants to Be a Millionaire.

In other words, she’s human. But then again, so were the other civil rights activists who took part in the movement. Colvin said that she has great memories of Martin Luther King Jr. — especially when he was speaking.

“He was just an average-looking fellow — it’s not like he was Kobe Bryant or anything,” Colvin said. “But when he opened his mouth he was like Charlton Heston playing Moses.”

In recent years, the now-81-year-old Colvin has become more well known, largely thanks to the award-winning book Claudette Colvin: Twice Toward Justice, which was published in 2009.

While Colvin was initially hesitant to talk about her personal experience with the civil rights movement, she now seems glad that her story is finally coming to light.

Her story serves as a reminder that the civil rights movement was more carefully strategized than it sometimes seemed, that women’s roles in achieving equality were greater than most people realize, and that young people have always been a powerful force for change.

“I knew then and I know now that, when it comes to justice, there is no easy way to get it,” Colvin once said. “You can’t sugarcoat it. You have to take a stand and say, ‘This is not right.'”

Today, Colvin is standing by what she said. At the age of 82, she’s pushing to have her juvenile arrest expunged.

The Final Stand Of A Civil Rights Icon

Ever since Claudette Colvin refused to give up her seat on a Montgomery bus, she’s had a criminal record. She was initially charged with two counts of violating Montgomery’s segregation laws and one felony count of assaulting a police officer.

Though the segregation-related charges were dropped, the felony assault count stuck. This so-called “assault”, said her lawyer, Phillip Ensler, could be “something as small as accidentally stepping on an officer’s toes.” After her arrest, Colvin was placed on “indefinite probation” and was not notified that her probation ended when she turned 18.

“So she thought she’s been on probation this entire time,” Ensler explained.

Now, more than 65 years later, she’s filed a motion for the juvenile courts to seal, destroy, and expunge her records. 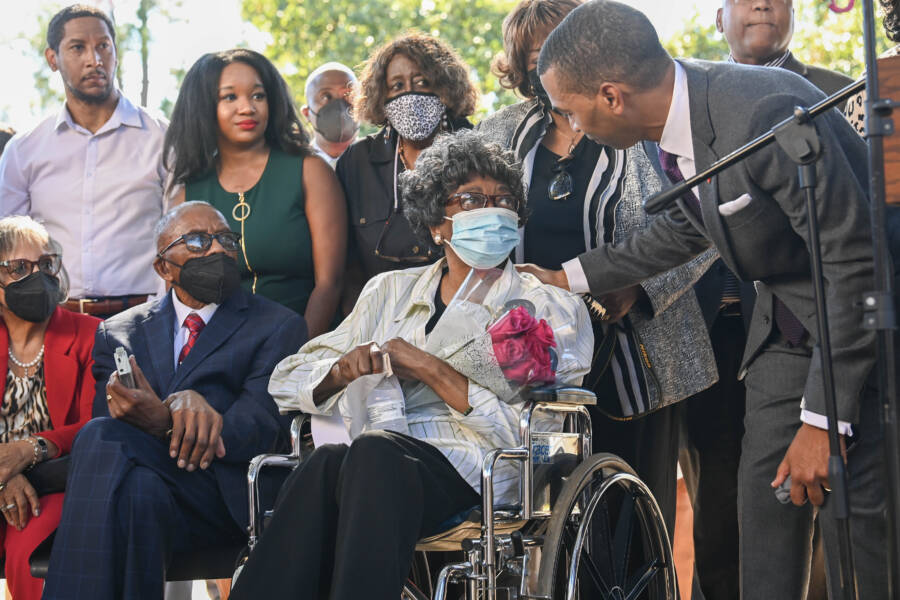 Julie Bennett/Getty ImagesClaudette Colvin with Montgomery Mayor Steve Reed, shortly after she asked for her juvenile arrest record to be expunged.

“I’m not doing it for me, I’m 82 years old,” Colvin told The New York Times. “But I wanted my grandchildren and my great-grandchildren to understand that their grandmother stood up for something very important, and that it changed our lives a lot, changed attitudes.”

“People think it was just about a seat on a bus but it was about so much more than that.”

So far, all signs indicate that Colvin’s records will be expunged without any problems. Montgomery County District Attorney Daryl Bailey announced his support of the motion, saying, “Her actions back in March of 1955 were conscientious, not criminal; inspired, not illegal; they should have led to praise and not prosecution.”

And the judge on Colvin’s case, Calvin L. Williams, also sees her as someone to admire, not condemn. In fact, he draws a line between her protest and his own trailblazing career. Williams is the first Black judge to serve in Alabama’s 15th Judicial Circuit Court.

“It’s somewhat of a full circle, historically, that an African American judge such as myself can sit in judgment of a request such as this to give Ms. Claudette Colvin really the justice that she so long deserved,” he said.

As for Colvin herself? She sees both her protest and her motion to expunge her record as small moments in the longer arc of justice. And she knows that the fight isn’t over yet.

“The struggle continues,” Colvin said. “I just don’t want us to regress as a race, as a minority group, and give up hope. Keep the faith, keep on going and keep on fighting.”

After reading about Claudette Colvin, learn 10 things you didn’t know about Martin Luther King Jr. Then, take a look at six civil rights leaders you don’t know, but should.