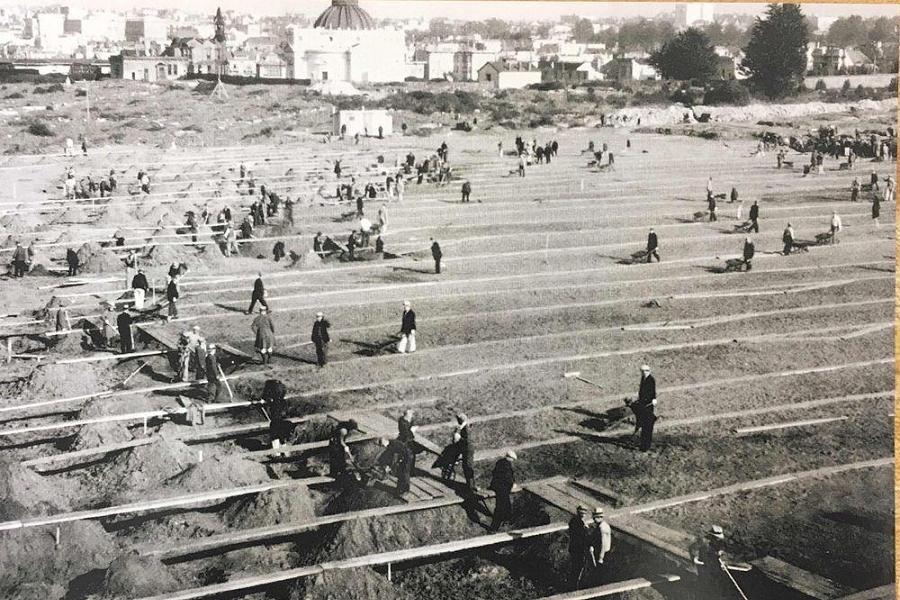 Wikimedia CommonsWorkers sift through the soil at San Francisco’s Odd Fellows Cemetery, today the site of the Angelo Rossi Playground and a public pool.

San Francisco’s mass exodus of the deceased began right after the war. All over town, cemeteries that had not accepted new residents in 40 years were dug up and torn down. Except for a religious cemetery at Mission Dolores Church, and a military site at the Presidio, all of the city’s yards were closed and dug up.

This was no small task – though no new bodies had been buried since 1900, San Francisco already had more than 150,000 graves by then, and by law every single one of them had to be certified empty before new structures could be started on the land. Developers were going to have to locate every plot in the city and dig for remains that may have been decaying for almost a century.

The economics of cemeteries made this task much harder than it had to be. Mortuaries charge a lot of money up front for what they do because the dead are notorious for not paying rent, and surviving relatives who care enough to pay for them eventually die themselves. When a grave occupant has no more living relatives who care to keep up the grave, it falls to the cemetery owner to do so, which the law requires them to do regardless of cost.

When new “customers” haven’t come through the door in over 40 years, even the youngest relatives of the residents have stopped paying their bills. With no money for upkeep, and even less for relocation, San Francisco’s 14 mortuary associations may have cut some corners with the disinterments, as in: they skipped a lot of them and probably didn’t look too hard for lost graves.

All of the headstones were ripped up, many to be ground up and used in construction, others just dumped in the Bay, and piles of dirt that the companies swore were human remains were solemnly trucked out to mass burial pits in Colma.

It’s likely that Wyatt Earp and his wife got this treatment, as did famous railroad-accident survivor Phineas Gage. Norton I, Emperor of the United States and Protector of Mexico had been moved in 1934, with Levi Strauss and William Randolph Hearst also getting places in Colma.

“It’s Great to Be Alive In Colma” 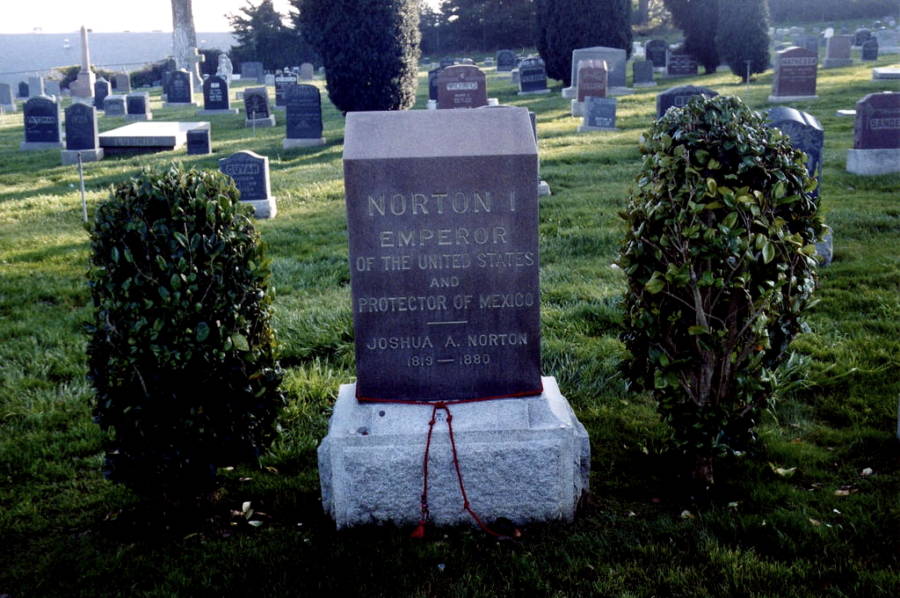 With land prices in the Bay Area nearly as high as they’ve ever been, and space still at a premium in the city, the flow of late San Franciscans to Colma has only increased. Abigail Folger is buried there, as are Pat Brown and Joe DiMaggio. Driven by the tech boom, the local economy has diversified somewhat.

At least some of the nearly 2,000 people in town work at jobs outside of funerary services, but the dead in Colma still take up 78 percent of the land area and are 99.9 percent of the residents. As the Bay Area’s population continues to increase, and San Francisco doesn’t get any bigger or cheaper, that ratio is likely to get even more lopsided until some canny real estate developer from the future starts whispering about miasmas again.

For more California nostalgia, be sure to check out San Francisco in the 1960s.