Found behind a wall in a museum, one bottle dates back to 1769. 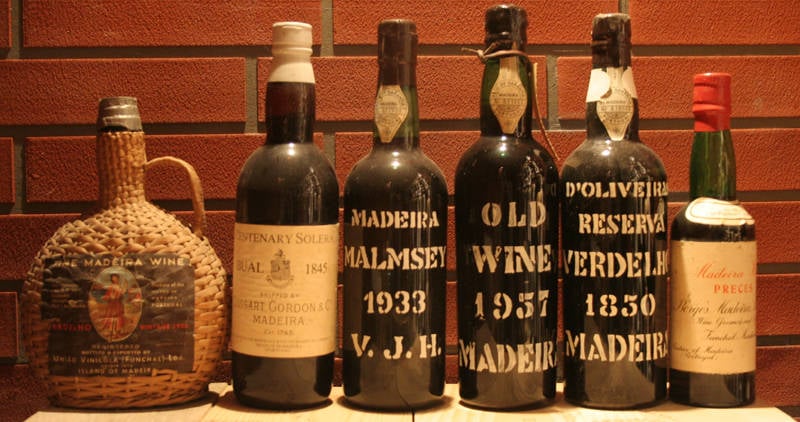 New Jersey’s Liberty Hall Museum is about to have a pretty rowdy party.

Or, at least, they could after having discovered more than 90 bottles and demijohns (aka old-timey bottles) of wine behind a Prohibition-era wall and locked wooden cage in their cellar.

And not just any wine! Extremely rare Madeira wine dating back to as early as 1769.

This particular type of vino was important in the early days of the United States.

Because our forefathers couldn’t figure out a way to grow wine-making grapes in the colonies, they needed to find a good place to import from.

That place was the Madeira Islands off the coast of Portugal.

So can we taste? 🍷😆Large, rare wine collection discovered in hidden cellar in New Jersey. Over 200+ year-old bottles!

John Hancock — widely known as the Founding Father with the world’s biggest signature — was a fan of Madeira. In 1768, one of his boats containing 3,150 gallons of the wine was seized by British authorities.

This caused a vehement dispute over the question of import taxes — one that caused riots in Boston and would later be recognized as a key step toward revolution. (Give me wine Wednesdays, or give me death!)

It was also Thomas Jefferson’s drink of choice and was used to toast the Declaration of Independence and the Constitution at their completion.

George Washington drank a pint of the stuff every night with his dinner and Ben Franklin wrote about it in his autobiography:

“… having a very ardent desire to see and observe the state of America a hundred years hence,” he said. “I should prefer to any ordinary death, being immersed in a cask of Madeira wine, with a few friends, till that time, to be then recalled to life by the solar warmth of my dear country!”

The drink is more American than Budweiser.

It’s also very rare. This new discovery is now the oldest-known collection of the sweet, sherry-like wine in the United States.

“We had no idea the old bottles were there,” John Kean, the museum’s president, told CNN. “We knew there would be wine, but had no idea as to the date. That was a major surprise.”

The house in which the Liberty Hall Museum resides was built in 1772. Originally a 14-room building, the hall was home to New Jersey’s first governor and Constitution signatory William Livingston.

After being purchased by the Kean family in 1811, it was expanded into a 50-room mansion.

The museum is currently undergoing major renovations, which led to the tearing down of the basement wall originally constructed during Prohibition.

Seeing what was behind it, it became very clear why the former residents worked so hard to hide their stash.

Some of the bottles (which were also found under piles of straw in the attic) had been specially created for New York millionaire Robert Lenox, who died in 1839.

Madeira is also a particularly good wine to drink after being hidden in a basement for centuries.

“It’s one of the longest-lived wines in the world,” sommelier Kara Joseph said. “It is almost indestructible because of how they make it, of the fermentation process.”

Though it probably tastes good, the museum hasn’t decided who might get to taste the 220-year old drinks.

One bottle might be opened, Kean said, when the President of Portugal visits in the coming months.

Posted by Liberty Hall Museum and Arboretum on Tuesday, July 11, 2017

Next, read about archaeologists recently found remains of America’s first colonists under a Florida wine shop. Then, check out these 30 awesome images from the end of Prohibition.