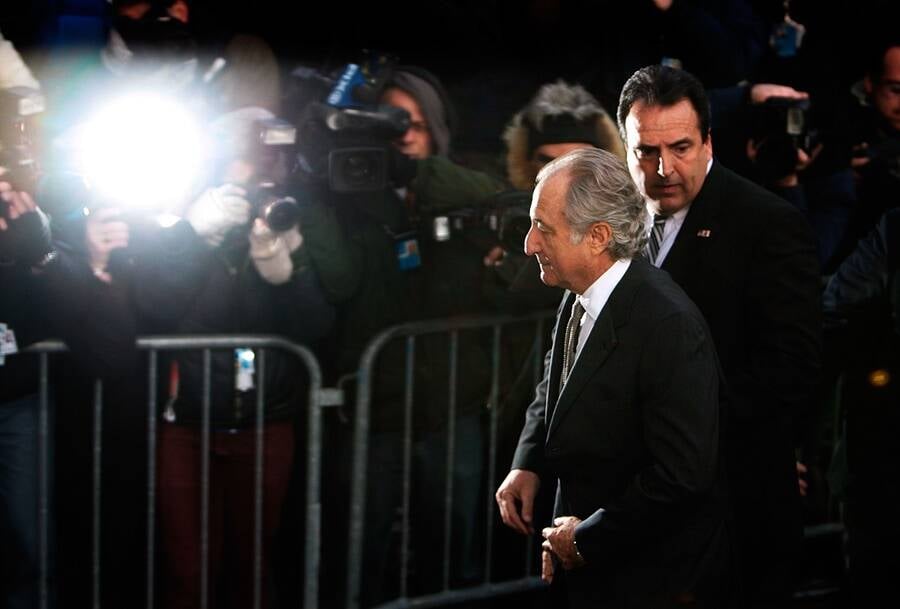 Chris Hondros/Getty ImagesFinancier and con man Bernie Madoff was sentenced to 150 years in prison for his massive investment scheme.

Bernie Madoff is considered one of the biggest con artists in Wall Street’s history — and his demise one of the biggest scandals in American financier history. Indeed, his scheme could not have been possible without the groundwork laid by another con artist on this list: Charles Ponzi.

Madoff’s scam began in the 1990s when he built a reputation for himself as one of the original “wolves of Wall Street.” He owned his own trading firm, had been chairman of the NASDAQ, and often presented at public panels related to the stock market.

By all accounts, Madoff was regarded as a savvy money manager, which meant that folks who wanted the best person to take care of their money — and could afford it — went to him.

“People always held him in the highest regard,” said Sandy Gross, who runs the executive search firm Pinetum Partners and had Madoff as one of her earliest clients. “People would always say he only knew how to make money. ‘That Bernie Madoff, he has done a great job — he makes money and he’s a great guy.'”

With a sterling reputation in one of the world’s most influential financial industries, Madoff easily duped clients into surrendering their money to him.

“He really was not like any Ponzi schemer I’ve ever met before, and unfortunately I’ve met more than a few over the years,” said Diana Henriques, who interviewed Madoff multiple times for her book The Wizard of Lies: Bernie Madoff and the Death of Trust. 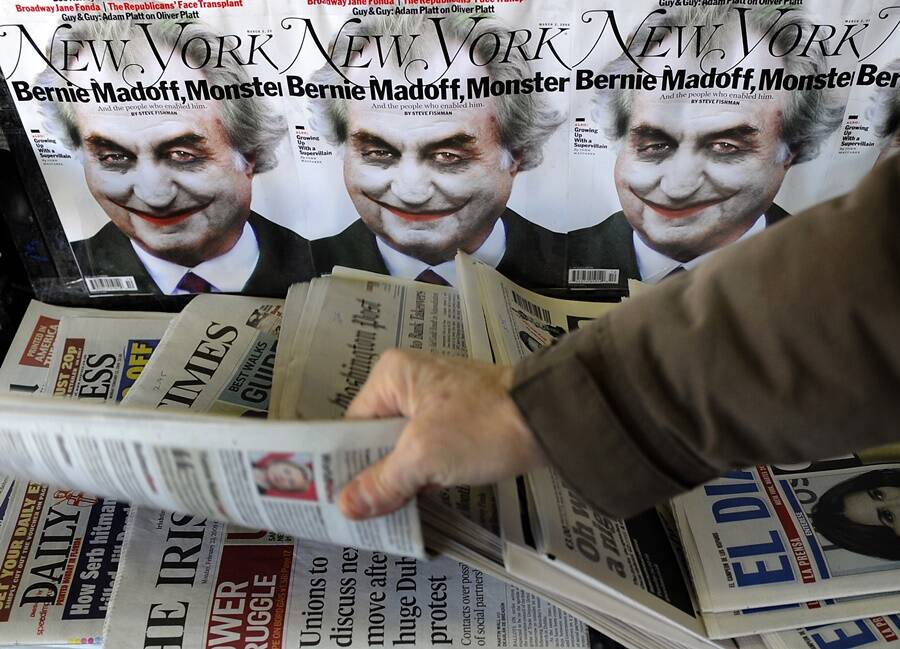 Timothy A. Clary/AFP via Getty ImagesBernie Madoff in joker make-up on the cover of New York Magazine.

But when Madoff’s popular hedge fund continued to reap high returns even during the recession, people in the industry became suspicious. He evaded questions about the hedge fund’s unusual success, telling the press that it was proprietary information so he couldn’t divulge how he’d done it.

Ultimately, Madoff was unable to keep up his scheme when clients began hounding him for their money. Investigators alleged that Bernie Madoff’s hedge fund had been a massive Ponzi scheme in which he took money from new investors to pay highly profitable returns to the old ones. Madoff was arrested in December 2008.

The scam artist pled guilty to 11 counts of fraud, money laundering, perjury and theft. He was sentenced to 150 years in prison for his mastermind scheme that swindled billions of dollars from countless clients.

In fact, the conman’s investment scheme was so elaborate that as of this writing, the courts are still trying to sift through all the financial documents.

Madoff is considered one of the most hated men in America due to the extreme damage he inflicted on his clients, many of whom reportedly lost their life savings to his scam. He had a pack of high-security bodyguards and wore a bulletproof vest during his trial.

CNBC’s original coverage of the conman’s sentencing in 2008.

“It’s such a heartbreaking situation for everybody that it’s hard to be satisfied, but he is now where he deserves to be,” said Brian Felsen, one of Madoff’s clients who had fallen prey to his insane grift.

“He should have been there a long time ago, and hopefully it will begin the grieving process for people, to know that he is going to be held accountable for his actions.”

In 2019, the conman made an appeal to President Donald Trump to commute his sentence. The president rejected his request. Then, in February 2020, Bernie Madoff revealed that he was dying from a terminal disease and petitioned the court for an early release from prison.

In June 2020 the conman’s request was denied.