Revered by collectors for its beautiful shell, the cone snail is not just a pretty prize — as one venomous sting from the animal could be enough to induce paralysis and even death.

When thinking of dangerous sea creatures, animals like sharks and jellyfish are usually the first to come to mind. But one seemingly innocuous critter has the potential to be just as deadly as the angriest great white. Beneath its beautiful exterior, the cone snail is hiding a lethal secret.

Cone snails typically use their venom to stun and devour the small fish and mollusks that they feed on, but that doesn’t mean that humans are safe from their fatal grasp. 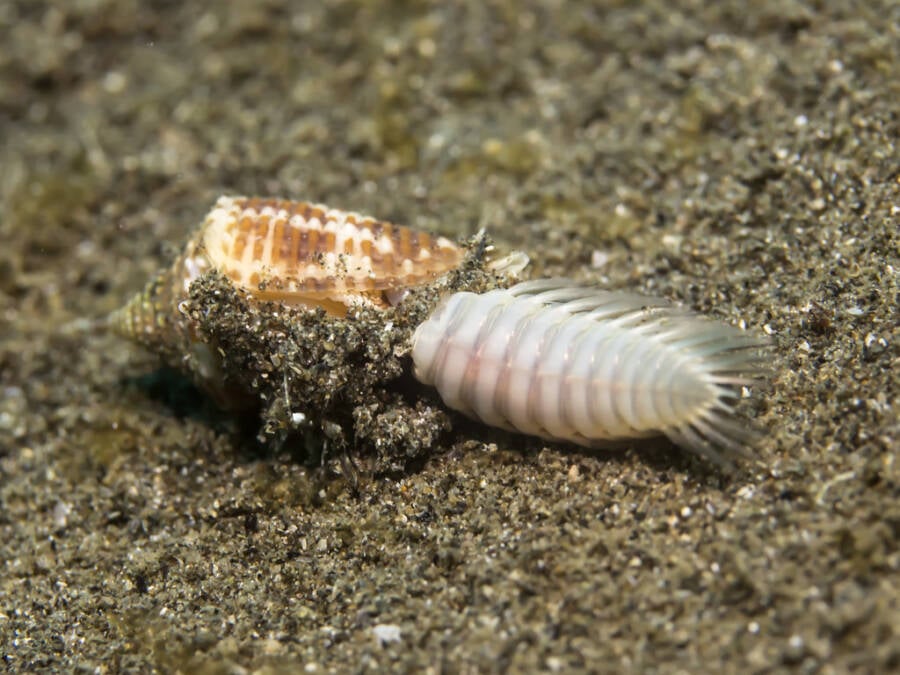 Many an unwary diver swimming in the beautiful, crystal-clear waters of the Pacific Ocean has haplessly picked up a stunning shell from the sea floor only to be met with a toxic sting. While most people recover with no lasting harm, dozens of human deaths can be attributed to the tiny snail.

And because cone snail venom contains a paralytic and works rapidly, some of its victims don’t even know what hit them — until they drop dead.

The Deadly Attack Of The Insidious Cone Snail

The harmless-looking cone snail lives in a beautiful shell made of colorful brown, black, or white patterns that is prized by beachcombers. However, according to Asbury Park Press, their outer beauty hides a deadly inner secret.

The cone snail, like most snails, is slow. However, its attack is swift and potent. 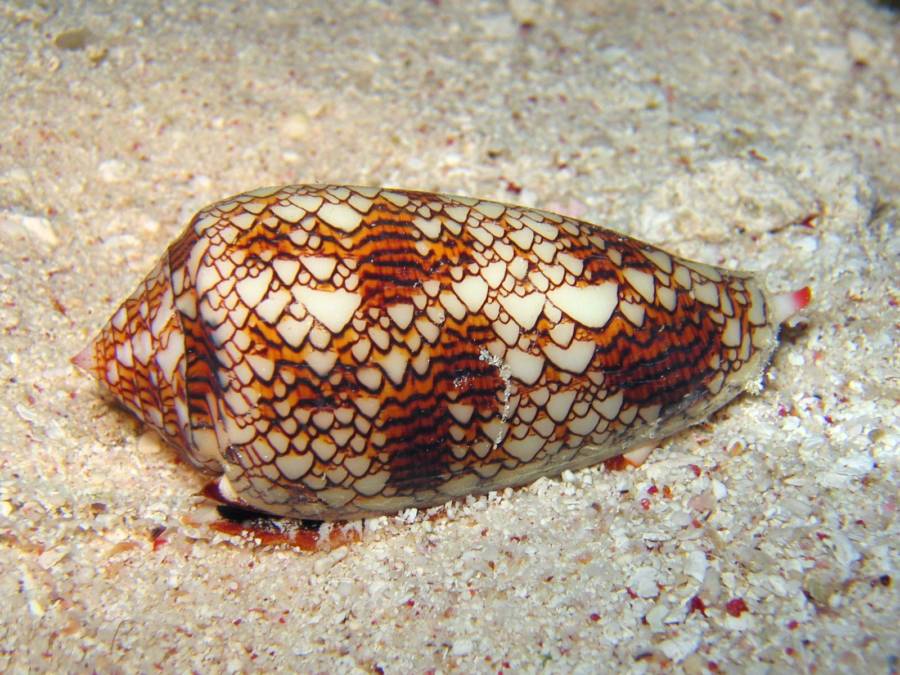 Wikimedia CommonsThe cone snail shell is beautiful, but inside is a deadly weapon.

These predatory sea creatures use a sophisticated detection system to seek out prey. They feast on fish, marine worms, or even other snails if food is scarce, according to the Aquarium of the Pacific. Once the nose of a cone snail senses food nearby, the animal deploys a sharp proboscis, or a needle-like protrusion, from its mouth. Victims may not even feel the sting of the proboscis because the attack is instantaneous and the venom has paralytic, pain-killing properties.

The snail’s attack is a thing of efficiency. The proboscis not only delivers the toxins — it allows the snail to draw the fish toward it with a sharp barb on the end. Once the fish is completely paralyzed, the cone snail expands its mouth and swallows it whole.

Of course, the proboscis is too small to pull in a human — but it can still pack a venomous punch.

Part of what makes the aquatic snail so deadly is the lack of pain its sting produces. Victims often don’t even know what hit them. Divers who are unfortunate enough to pick up the wrong shell often assume their diving gloves offer protection against any potential harms. Unfortunately for them, the proboscis of a cone snail can penetrate gloves, because the snail’s harpoon-like weapon is made for the tough outer skin of fish.

Luckily, humans aren’t very tasty or digestible to cone snails. Unless someone steps on the sea creature, startles one while diving, or picks up a shell with the deadly animal inside, humans and cone snails don’t often come into contact. And fortunately, deaths are rare. A 2004 report in the journal Nature attributed about 30 human deaths to cone snails.

Of the more than 700 species of cone snails, only a few are venomous enough to kill humans. The geography cone, or Conus geographus, is the deadliest, with more than 100 toxins in its six-inch body. It’s even colloquially known as the “cigarette snail,” because if you’re stung by one, you’ll only have enough time left to smoke a cigarette before you die.

Just because human deaths are uncommon, it doesn’t mean you should throw away caution.

A few microliters of cone snail toxin is powerful enough to kill 10 people. According to WebMD, once the poison enters your system, you may not experience symptoms for a few minutes or even days. Instead of pain, you could feel numbness or tingling.

There is no anti-venom available for cone snail stings. The only thing doctors can do is prevent the venom from spreading and try to remove the toxins from the injection site.

However, scientists are studying ways in which the cone snail’s dangerous venom can be used for good.

Despite its reputation as a killer, the cone snail isn’t all bad. Scientists are constantly studying the snail’s venom to isolate certain properties, as some substances in the toxins can be adapted for painkilling drugs. 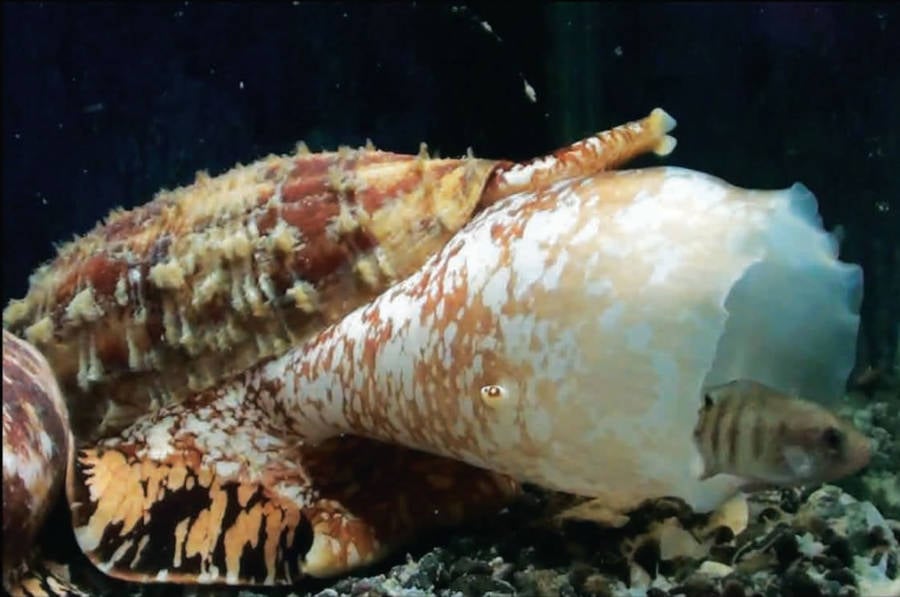 Australian scientists first isolated the venom into its individual parts in 1977, and they’ve been working to use the so-called conotoxins for good ever since. According to Nature, Baldomero ‘Toto’ Olivera of the University of Utah spent years injecting the venom into mice. He discovered that the tiny mammals demonstrated different side effects depending on which component of the venom he injected into them.

Some toxins put mice to sleep, while others sent them running or shaking their heads.

Experts hope to utilize cone snail venom for the treatment of diabetic neuropathy pain and even epilepsy. And one day, conotoxin may provide an alternative for opioids.

Markus Muttenthaler of the Institute of Biological Chemistry at the University of Vienna, Austria, told Science Daily, “It is 1,000 times more potent than morphine and triggers no symptoms of dependence, which is a big problem with opioid drugs.” One conotoxin has already been approved by the U.S. Food and Drug Administration (FDA). It’s injected directly into the spinal cord, revolutionizing chronic pain treatment.

But unless you’re in a medical setting, it’s best to avoid cone snail venom at all costs. Watch where you step when you’re at the beach and be careful when picking up that pretty shell. That simple, instinctive movement with your hand or foot could be your last.

After learning about the cone snail, read about 24 other dangerous animals that you don’t want to come across. Then, discover why the mako shark should scare you as much as a great white.