Stop And Smell The Corpse Flower, The Biggest Flower In The World

With blooms measuring over 10 feet tall, a corpse flower by any other name would smell just as horrible.

Growing in the depths of Sumatran rainforests is what’s known as the Amorphophallus titanum or titan arum. But most people know it as the corpse flower. 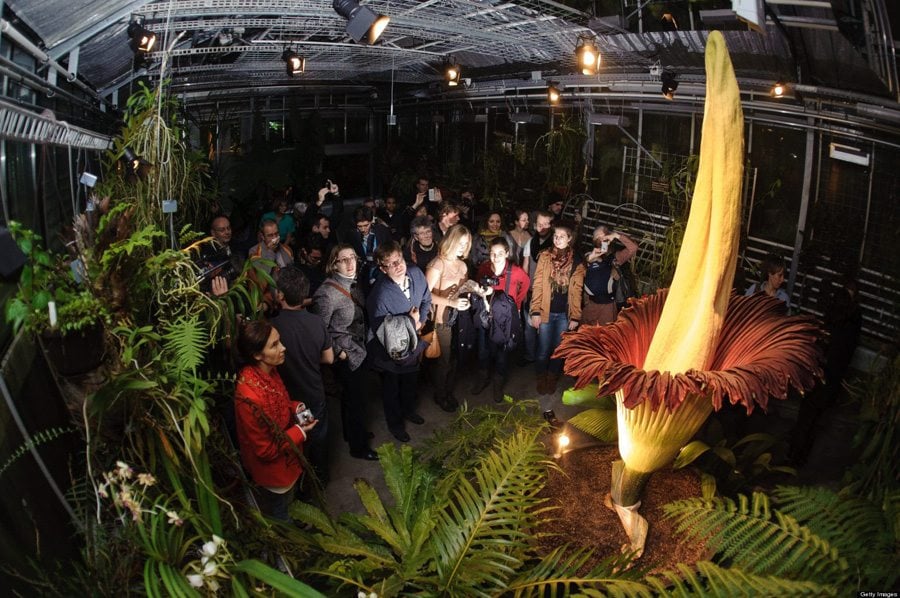 Along with its title-bearing status as the largest flowering, single-branched plant in the world, the corpse flower is also regarded as the worst-smelling one. Its rare and beautiful bloom emits a scent that’s been likened to stinky fish, baby diapers, and rotting flesh.

Measuring up to 10 feet tall, this putrid-smelling plant is engineered by nature to attract beetles and bugs from miles away to help it pollinate and reproduce.

The Corpse Flower Stinks Up The Whole World 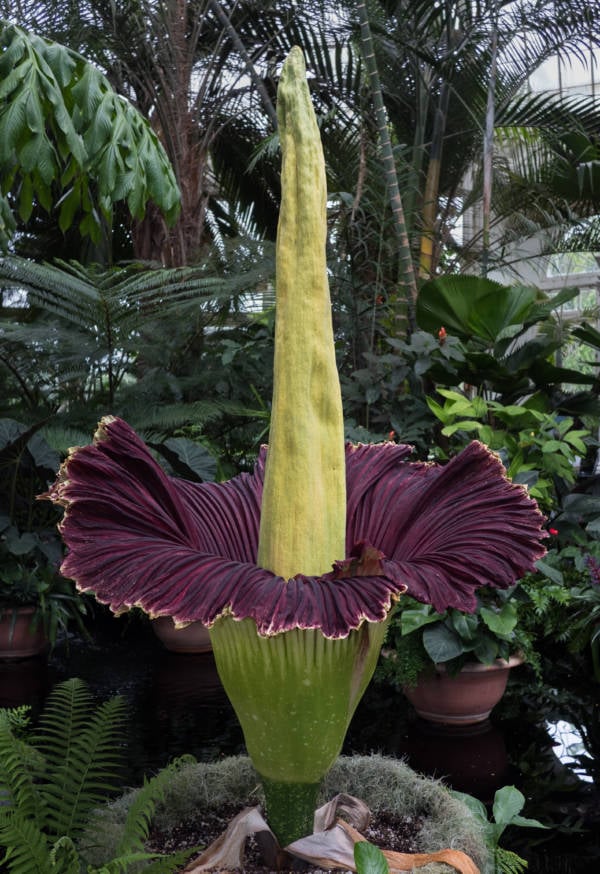 Though it’s only native to Indonesia, the corpse flower has been successfully cultivated in greenhouses around the world, where the rare occasion of blooming causes a surge in visitors anxious to get a good look (and a reluctant whiff) of the oddity.

One flower first bloomed in London in 1889, thought to be the first corpse flower bloom outside Indonesia. Germany, Brazil, India, and Australia have all cultivated their own, and there are dozens across the United States.

These controlled cultivations have seen some staggeringly large blooms. The London one clocked in at nearly 10 feet tall and 260 pounds last year. One New Hampshire-grown stinker made it into the Guinness Book of World Records in 2010 after measuring in at an incredible 10 feet, 2.25 inches high. For reference, that’s like two Lady Gagas stacked on top of each other. 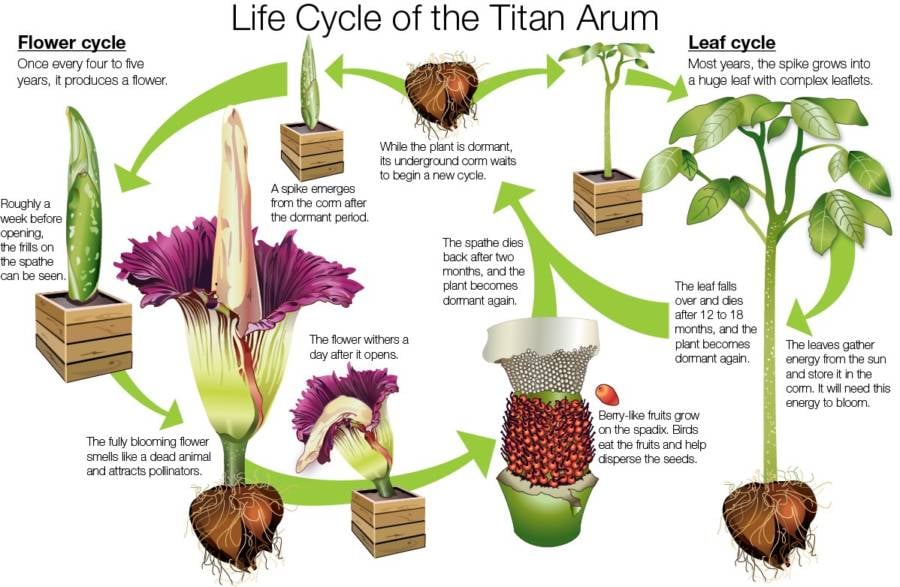 There is no annual blooming cycle for this strange plant; it simply waits until there’s enough energy built up in its corm, or underground stem. Only then does it start the process of growing its giant flower. Corpse flowers sometimes go several decades without blooming, but on average, they bloom about every four or five years.

Once it’s gathered enough energy, the corm will grow a protective spathe. The spathe is the petal-like structure that opens up during a bloom; it’s actually just one big umbrella-like leaf, and it encapsulates the hollow spadix, which shoots up to the flower’s maximum height.

When the bloom is in its fully open splendor, it will last anywhere from 24-48 hours, and then quickly die and collapse. As you might have guessed, these brief but spectacular blooms make for some pretty dramatic time-lapse videos:

Watch a corpse flower at Indiana University bloom and wither away.

Why Is Titan Arum So Stinky?

In short, titan arum has to smell to survive.

The corpse flower’s distinctive stink is designed to attract beetles and flies far and wide, who think they’re slithering toward a dead animal. Once they’ve arrived, the bugs pollinate the two rings of tiny flowers at the base of the spadix — yellow-colored “male” flowers and dark purple and yellow “female” flowers. 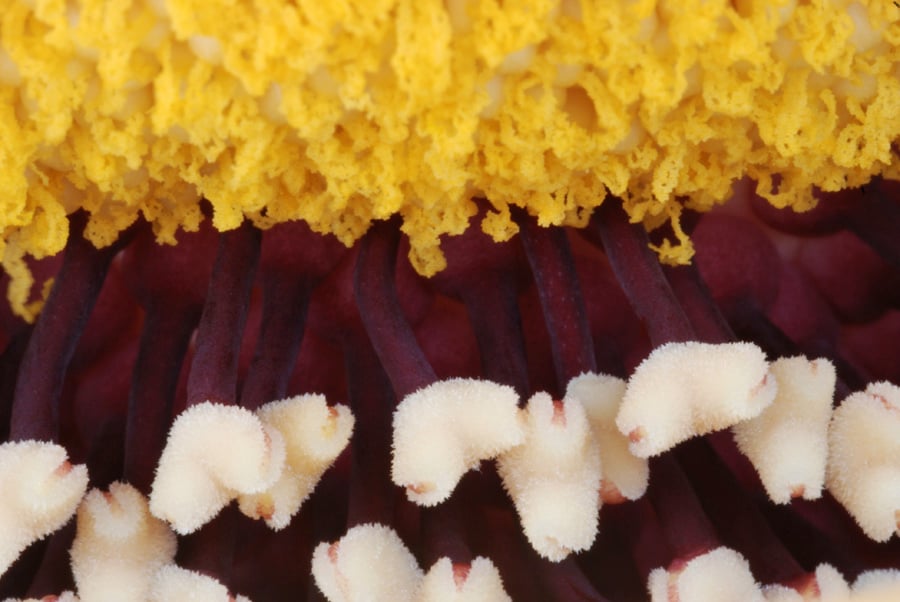 Wikimedia CommonsThe male flowers (yellow) and female flowers (purple and white) inside the corpse flower are ready for pollination at different times, within hours of each other.

To release the smell, the plant has to raise its temperature — one corpse flower was documented to reach 96 degrees Fahrenheit. The heat allows it to synthesize chemical compounds like timethylamine, which smells like rotting fish, and isovaleric acid, reminiscent of smelly gym socks. The heat also provides the added bonus of sending the flower’s smells high into the air, so they can travel better through the rainforest. The odor usually starts in the middle of the night and lasts between four and six hours at its foulest.

The dark red color of the inside of corpse flower’s spathe, along with the spadix’s texture and heat, perpetuates the bugs’ notion that they’ve landed on prime, rotting meat.

If those bugs do their job right, then the flower will sprout hundreds of cherry-like fruits. The fruits start gold, turn orange, and then ripen to a dark red after five or six months. In nature, the rhinoceros hornbill — a now ecologically threatened bird native to southeast Asia — will eat the fruit and spread its tough-shelled seeds. With luck, those seeds will take root and sprout new foul-smelling, 10-foot-tall flowers. And that’s what they call symbiosis! 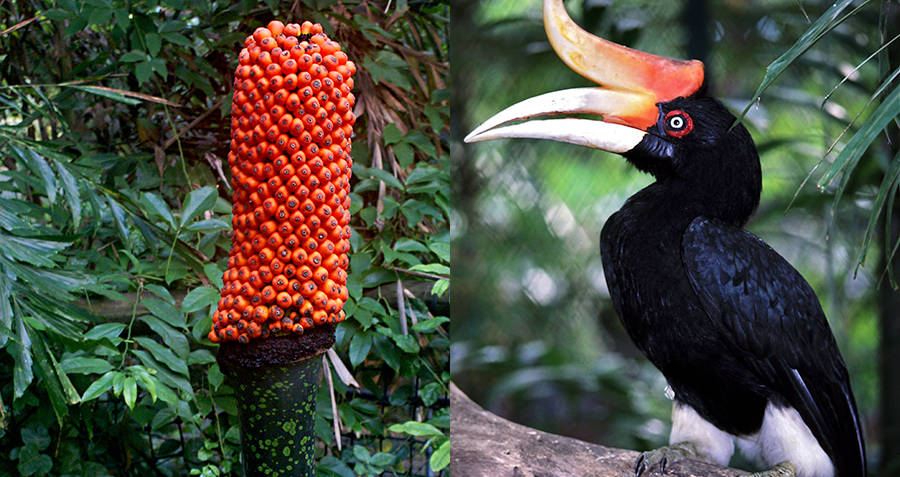 Barry/ennor and Bernard Dupont via FlickrIn Indonesia, the rhinoceros hornbill (right) will eat the corpse flower’s fruit (left) and disperse its seeds across dense rainforests.

Outside Indonesia, corpse flowers are largely kept in greenhouses — it’s the best way for, say, a garden in Milwaukee to mimic the constant high temperatures and humidity of Indonesia’s tropical rainforests. And most greenhouses don’t rely on dung beetles to pollinate its plants, nor do they collect tropical birds to eat and spread their seeds. Instead, they do their best to mimic those behaviors with human hands.

To pollinate their blooming corpse flowers, botanists first make small holes in the spathe. That way, it’s easier to get to the spadix’s small flowers and collect the pollen. Greenhouses will even share their pollen with others, so their corpse flowers can cross-pollinate. And instead of eating the flower’s fruit, which is probably poisonous to humans, cultivators will harvest the fruit, extract the seeds, and plant them in soil, and cross their fingers that a new flower will sprout.

And Yes, It Does Look Like A Giant Penis

It seems the shape and name of the Amorphophallus titanum has made westerners uncomfortable since its earliest greenhouse cultivations. Rumor has it that English governesses forbade their mistresses from looking at it back in the 19th century, and American botanist Walter Henricks Hodge coined the term titan arum in the early 1960s, presumably because he didn’t want to write the word “phallus” over and over again in his scientific writings.

On his show The Private Life of Plants, where a blooming corpse flower was captured on film for the first time, Sir David Attenborough adopted Hodge’s term — and the name has stuck:

Think the corpse flower is strange? It didn’t even make our list of the world’s strangest plants. After that, you can read about the deadly Poison Garden of Alnwick.