The Inspiring Story Of Corrie Ten Boom, The Dutch Watchmaker Who Saved 800 Jews From The Holocaust

From 1940 to 1944, Corrie ten Boom and her family used their home in the Netherlands as a hiding place for Jews who were fleeing the Nazis.

The watchmakers had a secret. In their home above the family shop on Barteljorisstraat in the Dutch city of Haarlem, they had built a safe room. There, Corrie ten Boom, her sister, and their father would save the lives of some 800 Jews fleeing the Nazis.

The ten Boom family joined the Dutch resistance after Germany invaded the Netherlands in 1940. Guided by their religious beliefs, they quietly funneled desperate Jewish refugees to safety. But in 1944, an informer would send the Nazis straight to their door. 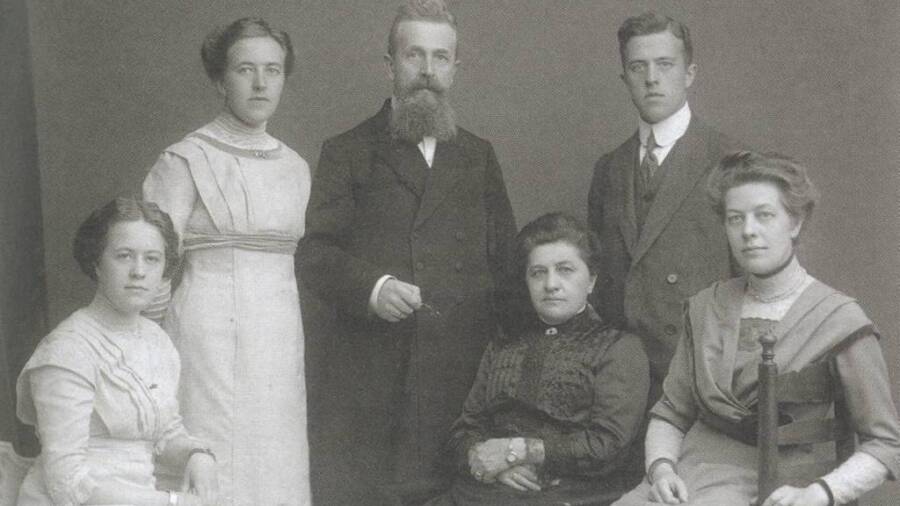 Corrie ten Boom survived her time in concentration camps — barely — after her father and sister died.

Once the war ended, she set up a rehabilitation clinic for Holocaust survivors, preached the power of forgiveness, and wrote books about her experience. 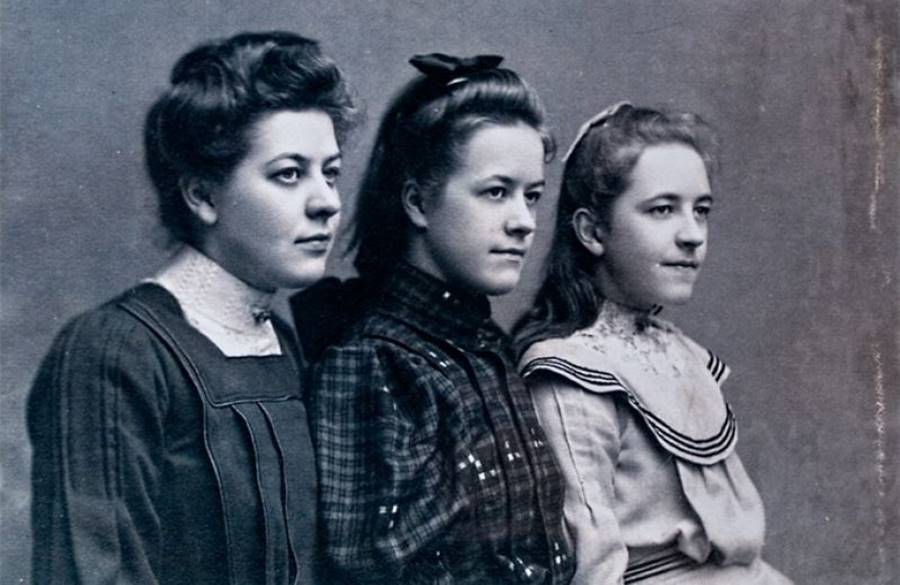 Corrie ten Boom was born Cornelia Arnolda Johanna ten Boom on April 15, 1892. The youngest of four children, ten Boom grew up in a tight-knit religious family. They were Calvinists in the Dutch Reformed Church, which emphasized service to others.

“I had always felt happy in this little shop, with its tiny voices and shelves of small shining faces,” ten Bloom wrote in her postwar memoir, The Hiding Place.

After her mother’s death and a failed romance, ten Boom decided that she wanted to follow in her father’s footsteps. “I was finding a joy in work I’d never dreamed of,” ten Boom wrote. She had long helped her father with the administration of his shop, but now decided she wanted to learn the mechanics of watch repair itself. 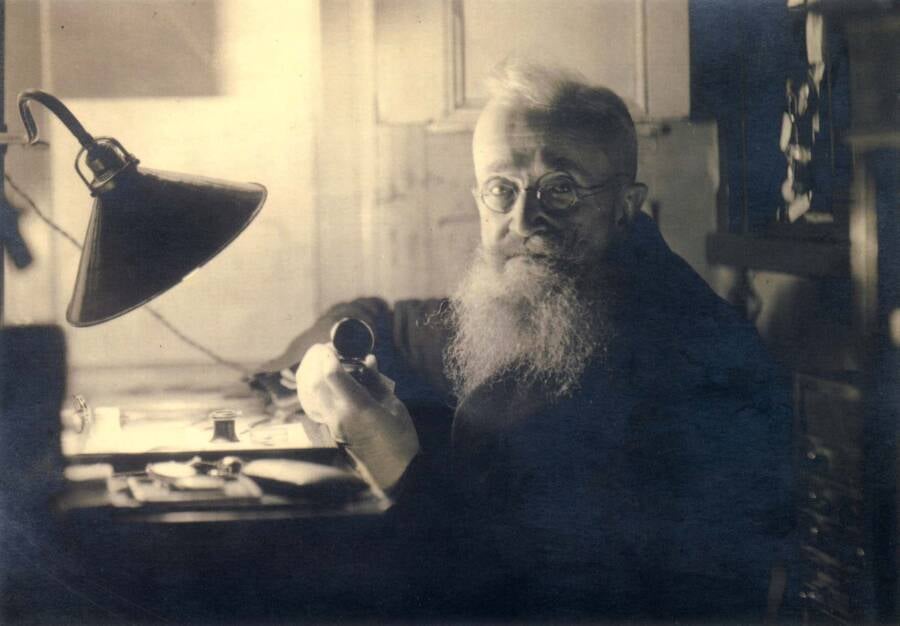 She had no better mentor than Casper ten Boom. “Father’s patience, his almost mystic rapport with the harmonies of watchworks, these were things that could not be taught,” ten Boom remembered.

Alongside work with her father, ten Boom also enrolled in school to become a watchmaker. In 1922, she became the first licensed female watchmaker in Holland.

“And so was established the pattern our lives were to follow for over twenty years,” she wrote. In addition to helping her father run the shop, she established a youth club for young girls which offered religious instruction and classes.

But the peaceful existence of the ten Bloom family was fragile. War clouds were on the horizon. Soon, visitors to the watch store came with worries about a looming invasion by Nazi Germany.

The Nazis Come To The Netherlands 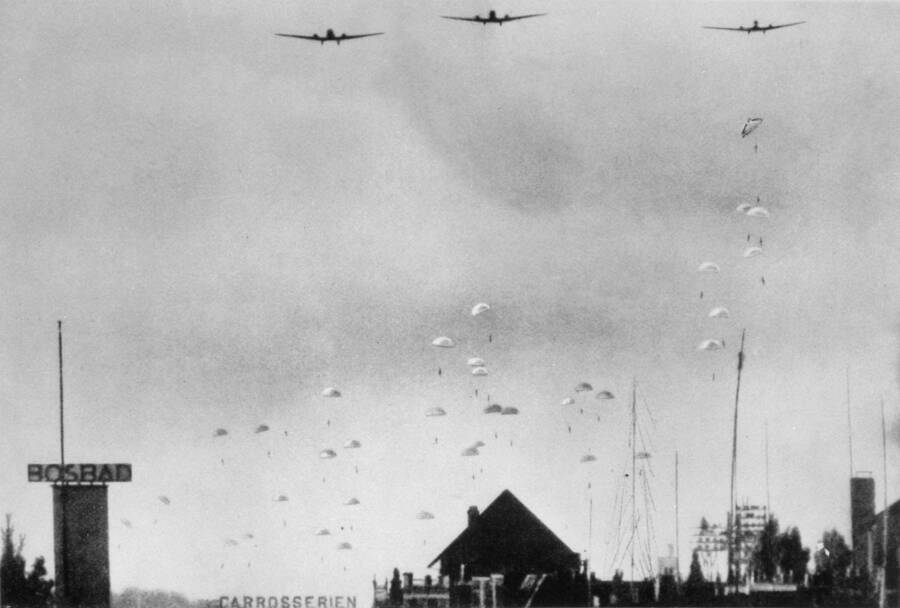 Dutch National ArchivesGerman paratroopers invading the Netherlands on May 10, 1940.

Over a stretch of seven days in May 1940, everything changed for Corrie ten Boom and her family. The Nazis invaded on May 10th. By May 17th, Germany occupied the Netherlands.

Before long, the country became a dangerous place for its Jewish citizens. Throughout the early 1940s, thousands and thousands of Jews were sent to concentration camps, leading Adolf Hitler acolyte Adolf Eichmann to state with satisfaction: “In the beginning you could say that the trains from the Netherlands were really rolling; it was quite wonderful.”

Corrie ten Boom vividly recalled how the mood of the country changed. Arrests of Jewish citizens became and more and more frequent. When ten Boom had Jewish customers, she delivered their watches so that they didn’t have to risk going out.

“At any minute there might be a rap on this door,” she remembered thinking while visiting with Jewish friends. “These children, this mother and father, might be ordered to the back of a truck.” 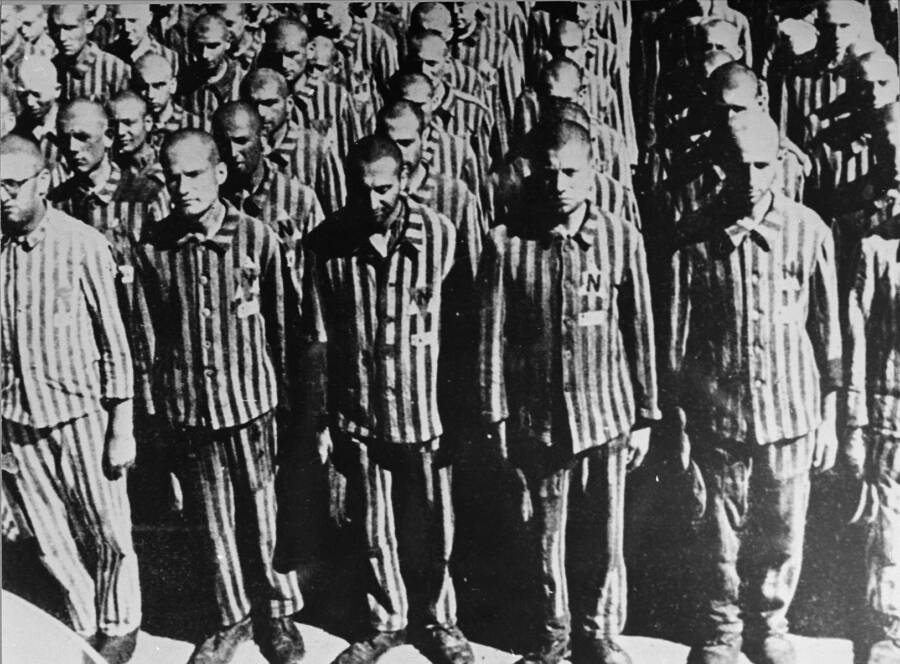 As members of the Dutch Reformed Church, the entire ten Boom family believed firmly in the equality of all human beings before God. They especially respected Jews as “God’s ancient people.” So when a Jewish woman named Kleermaker came to their door looking for help, they opened their arms.

“In this household, God’s people are always welcome,” Casper ten Boom said. He, Corrie, and her sister Bestie agreed to shelter her.

Before long, word of the ten Boom’s generosity spread. More and more people showed up at their doorstep looking for help. And as conditions in the Netherlands grew more dangerous, the family even built a secret room in Corrie ten Boom’s bedroom. 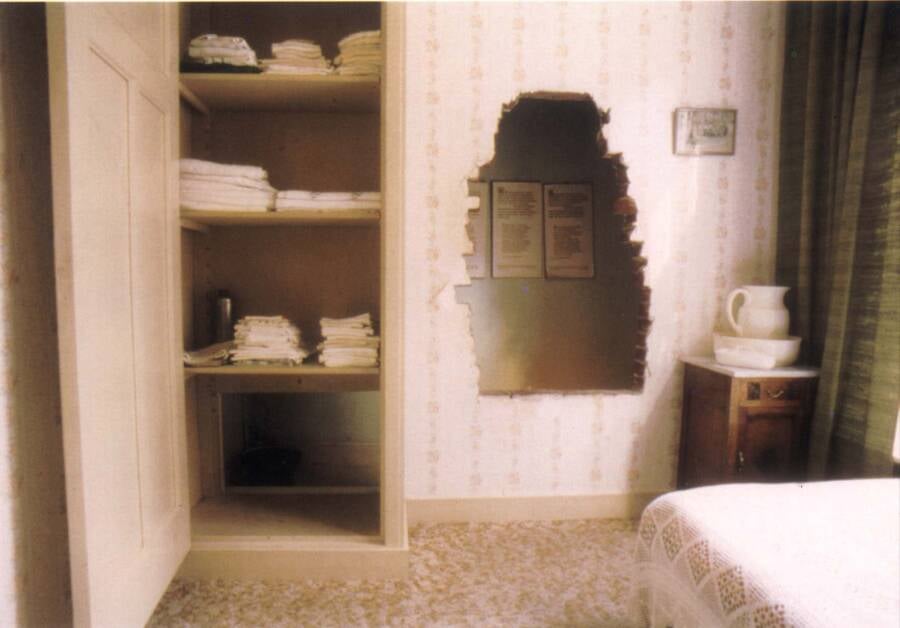 The room was no larger than a closet but could hold about six people. It had a crude ventilation system so they could get fresh air. The ten Booms also installed a buzzer in the house in order to quickly alert anyone there to hide during security sweeps. Some people stayed for an extended period; others moved on after a few days.

Despite the peril that lurked nearby, conditions within the ten Boom house were often light and merry. People hiding in the house played music together. At one point, everyone got together to rehearse a play.

Corrie ten Boom and her family had been betrayed by a Dutch informant. That day, the Gestapo raided the ten Boom home.

After a search of the house and an interrogation of the family, Corrie, Bestie, and Casper were arrested — the Gestapo never found the Jews hiding in the secret room. 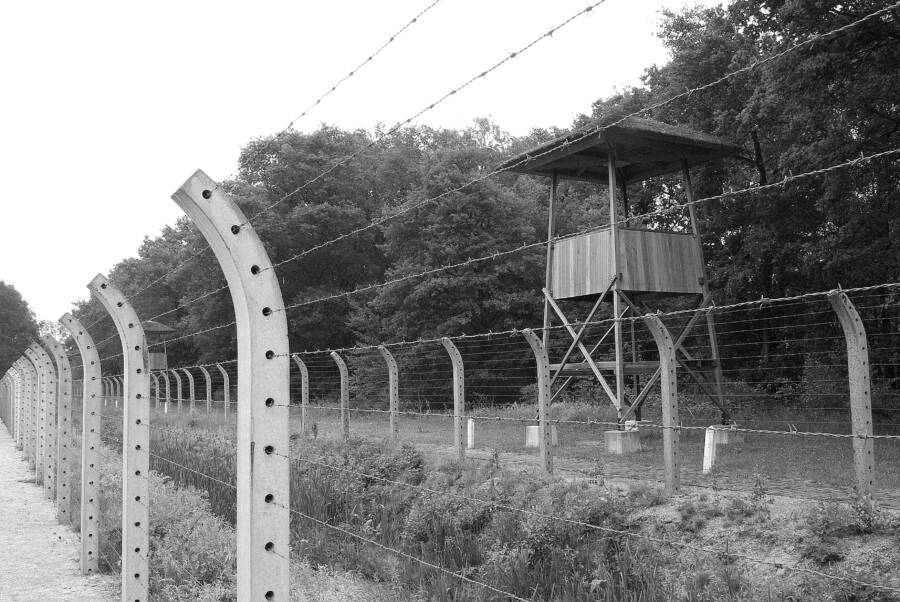 The Gestapo ultimately arrested 30 people who had been in the ten Boom home that day. Eventually, they sent everyone home — except for Casper, Betsie, and Corrie ten Boom.

“I’d like to send you home, old fellow,” one of the guards at the Scheveningen prison said to Casper, who was then 84-years-old. “I’ll take your word that you won’t cause any more trouble.”

“If I go home today,” Casper responded, “I will open my door again to any man in need who knocks.”

Ten days later, he grew ill and died in prison. 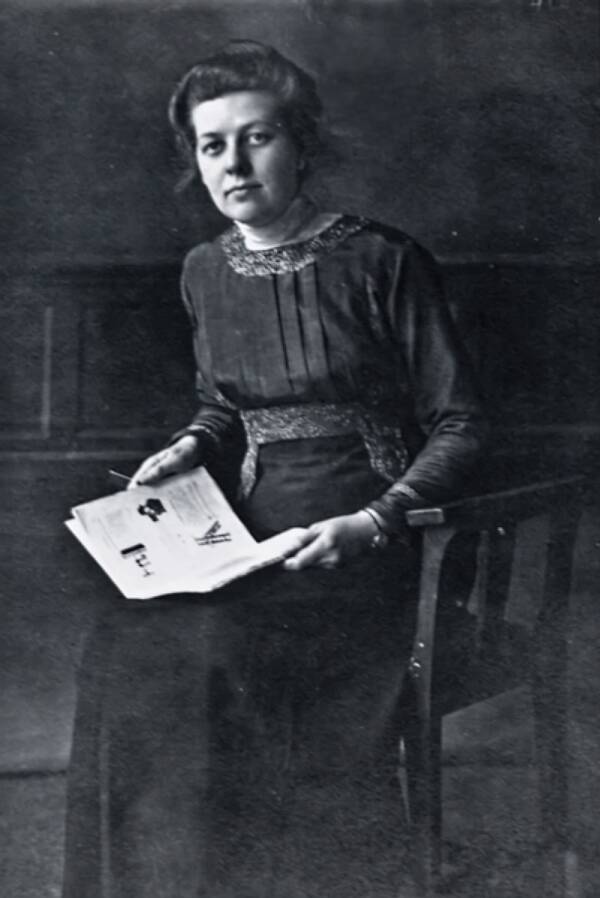 There, Betsie and Corrie lived under brutal conditions. They were among so-called “inferior beings” — social outcasts, Gypsies, resistance fighters, Jehovah’s Witnesses, political enemies, prostitutes, the disabled, and the mentally ill. The Nazi guards would routinely use their prisoners for twisted experiments. Between 1939 and 1945, more than 100,000 women would die there.

Although Betsie and Corrie were able to find solace in their faith during their time in the camps, Betsie became ill at Ravensbrück. On December 16, 1944, she died at the age of 59.

“We must tell people what we have learned here,” Betsie said shortly before her death. “That there is no pit so deep that He is not deeper still. They will listen to us, Corrie, because we have been there.”

Due to a stroke of extraordinary luck — a clerical error — Corrie ten Boom was released 12 days after her sister’s death. She didn’t learn about the mistake until later. After ten Boom left, all the women in her age group were sent to the gas chamber. 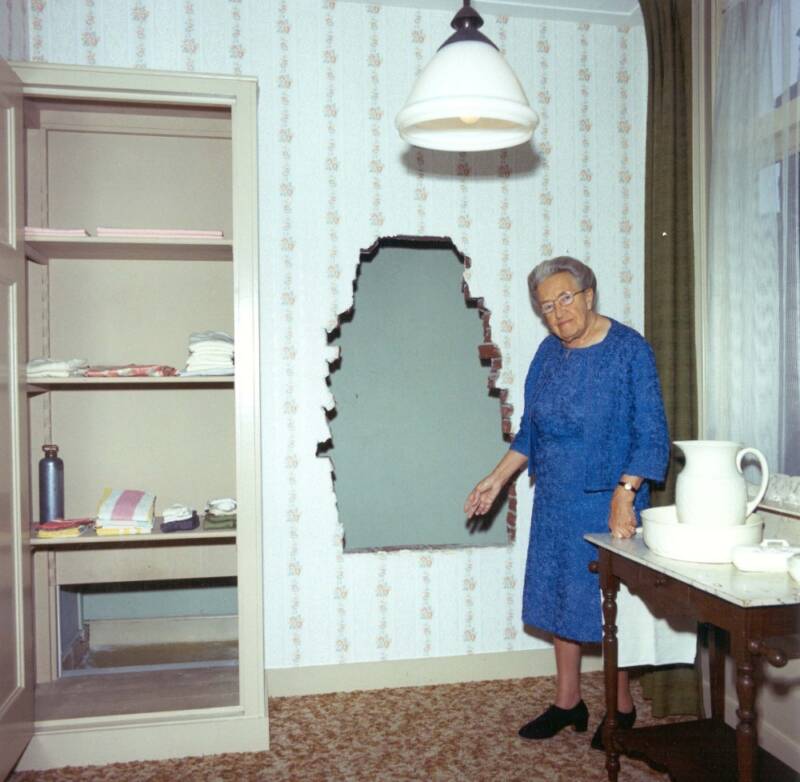 After leaving Ravensbrück, Corrie ten Boom made her way home. Everything had changed. Her sister and father were dead. The city she’d known was utterly transformed.

But Corrie ten Boom hadn’t lost herself. After the war ended, she opened up a rehabilitation center for concentration camp survivors. She took the last words of her sister to heart, and spread the message that “there is no pit so deep that God’s love is not deeper still” and that “God will give us the love to be able to forgive our enemies.”

In 1947, Corrie ten Boom even forgave one of her former captors at a church in Munich.

“You mentioned Ravensbrück in your talk,” he told her. “I was a guard in there.” He didn’t recognize his former prisoner. But ten Boom recognized him. Although she remembered the trauma of her captivity, she gave forgiveness when he asked for it.

“For I had to do it — I knew that,” ten Boom wrote. “The message that God forgives has a prior condition: that we forgive those who have injured us.” 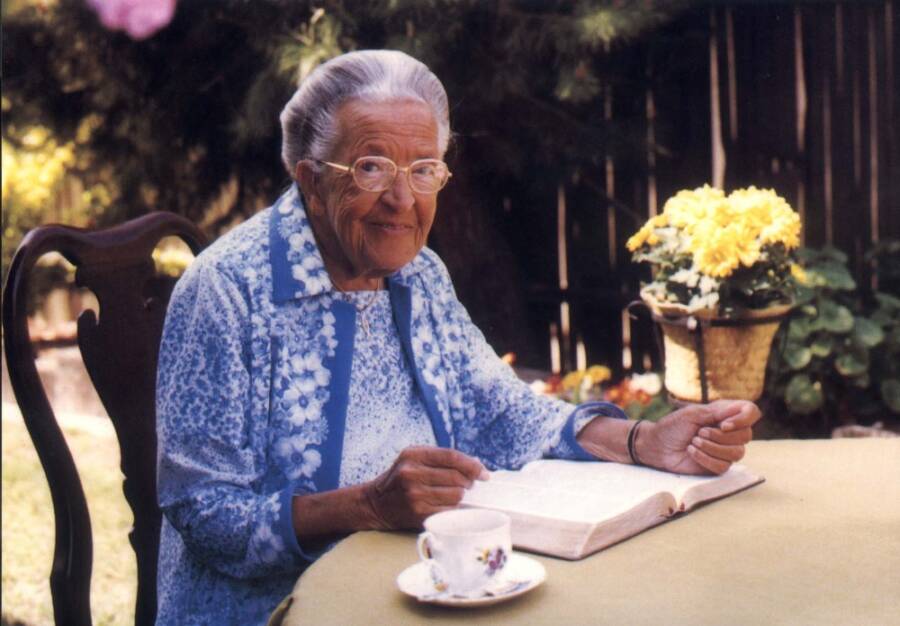 In the next 30 years, Corrie ten Boom spent her life spreading that message. She traveled to over 60 countries to speak about the power of forgiveness.

By the time she died at the age of 91, on April 15, 1983, ten Boom had been recognized as one of Yad Vashem’s Righteousness Among Nations, an honor given by Israel to non-Jews who helped Jews during the Holocaust. Casper and Betsie ten Boom were recognized as well. Through their efforts, they’d saved some 800 lives.

Corrie ten Boom died on the same day she was born. In Judaism, this symmetry is considered a blessing for those who have completed their mission on Earth.

After reading about Corrie ten Boom, see why some people wonder if Hitler was Jewish. Or, learn about Irena Sendler, who saved 2,500 Jewish children during the Holocaust.