An eerily abandoned village brought down by natural disasters and the Plague, Craco is still hauntingly alive with history. 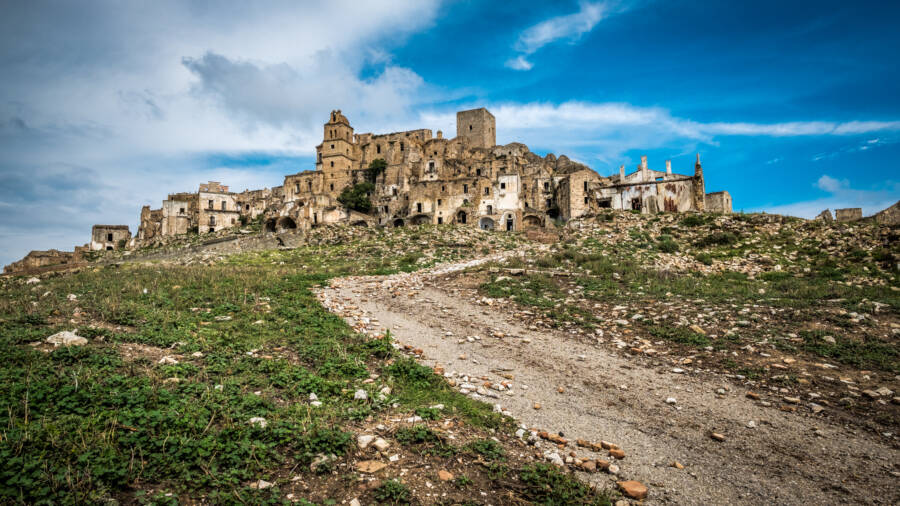 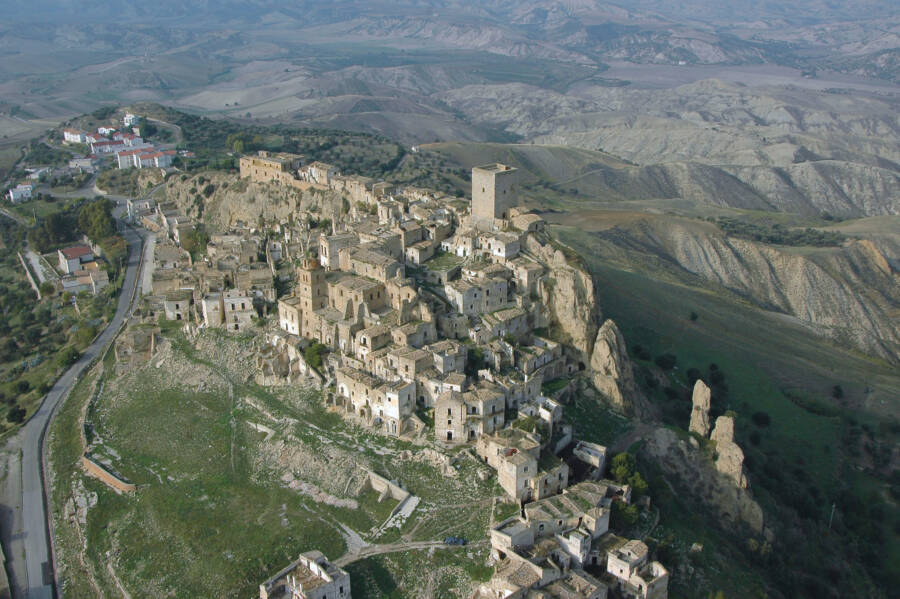 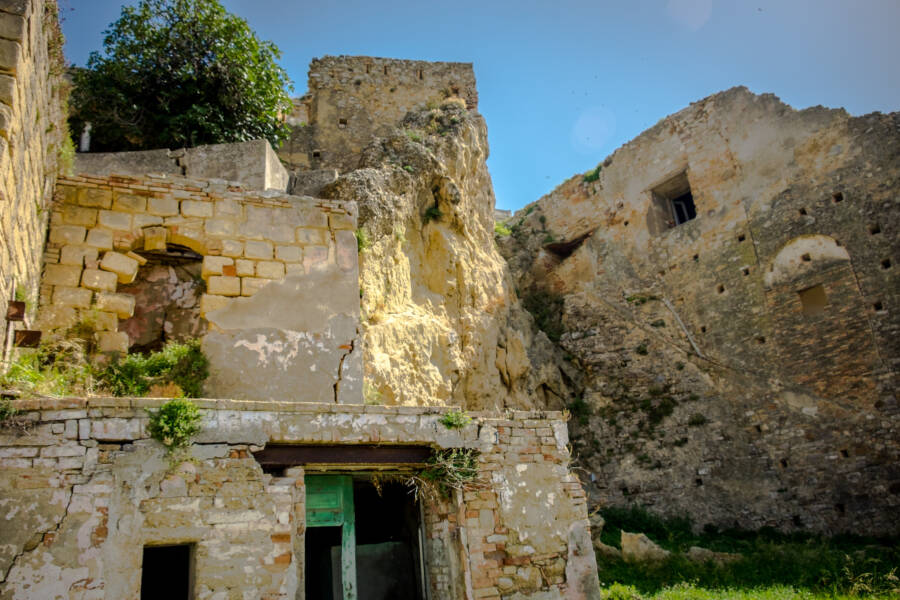 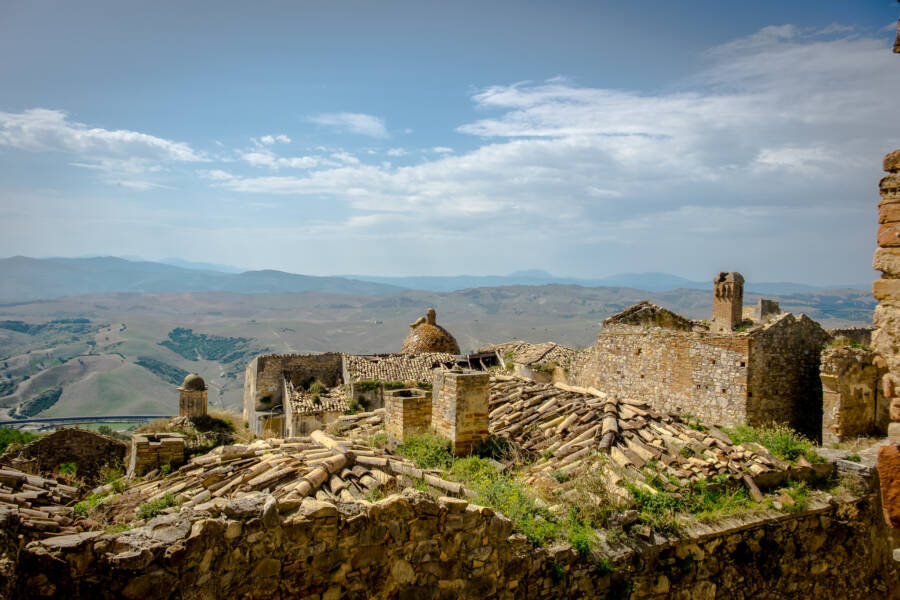 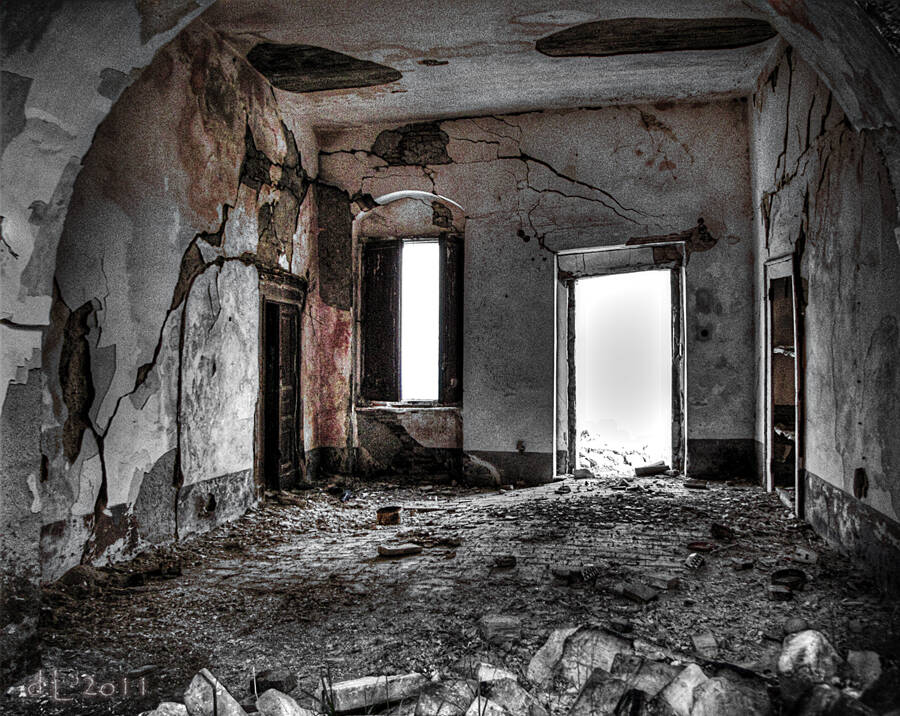 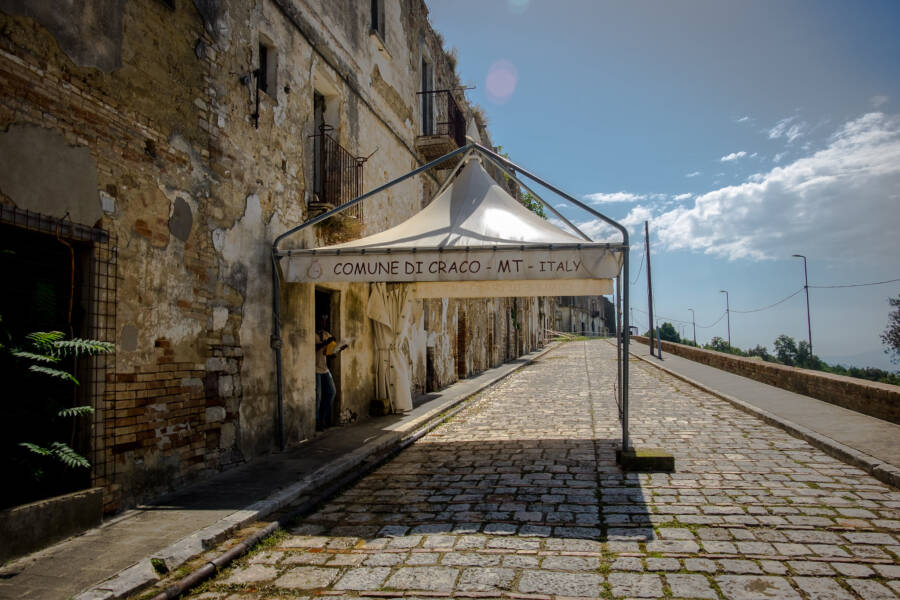 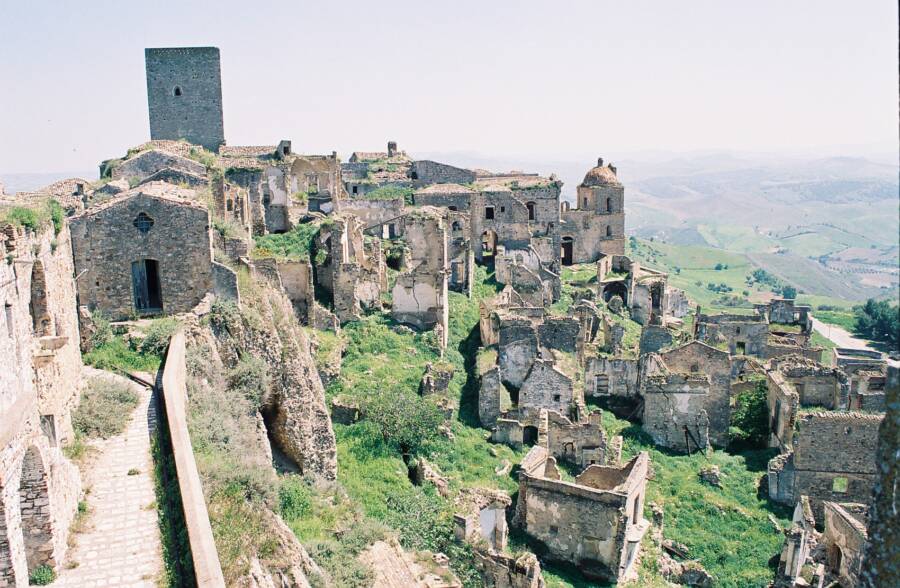 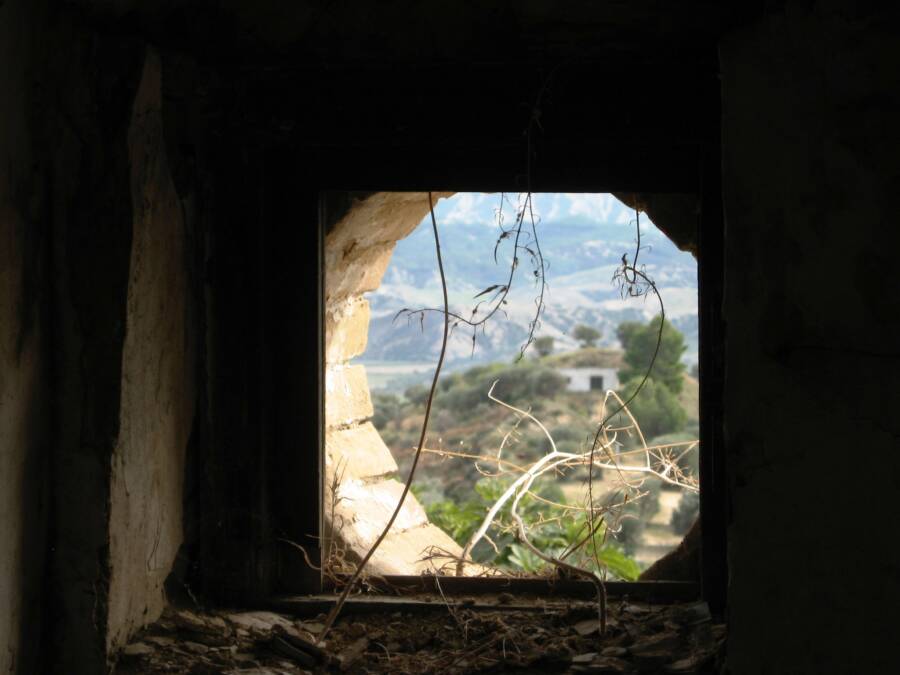 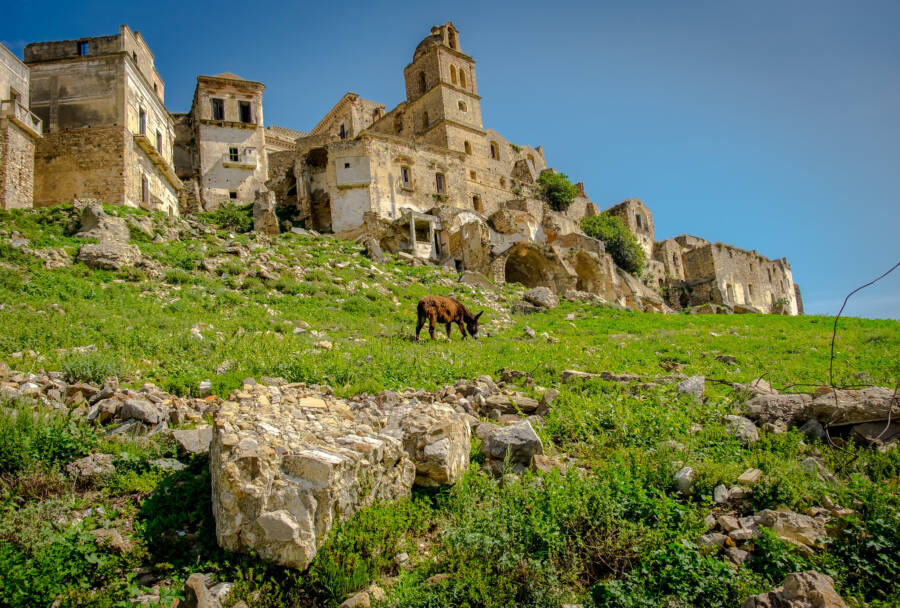 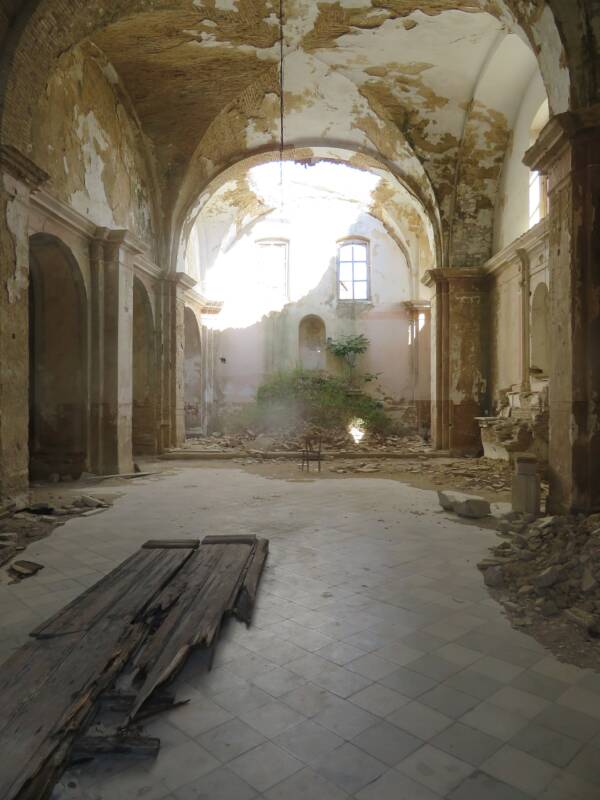 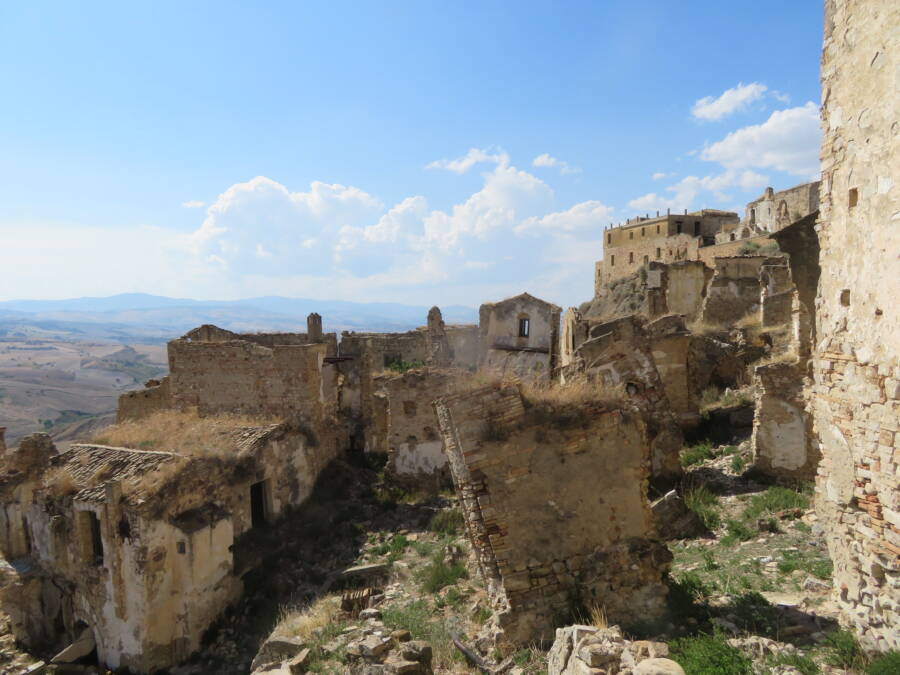 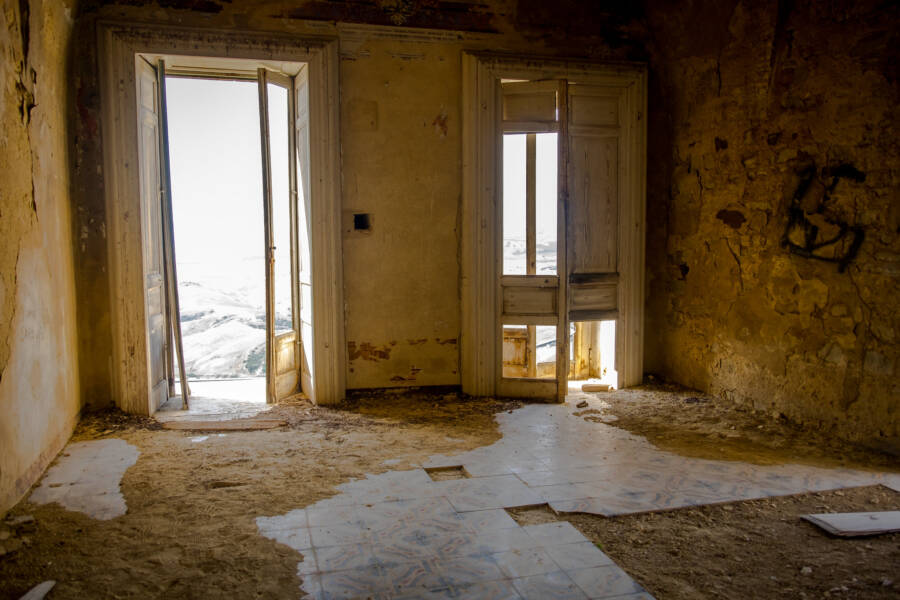 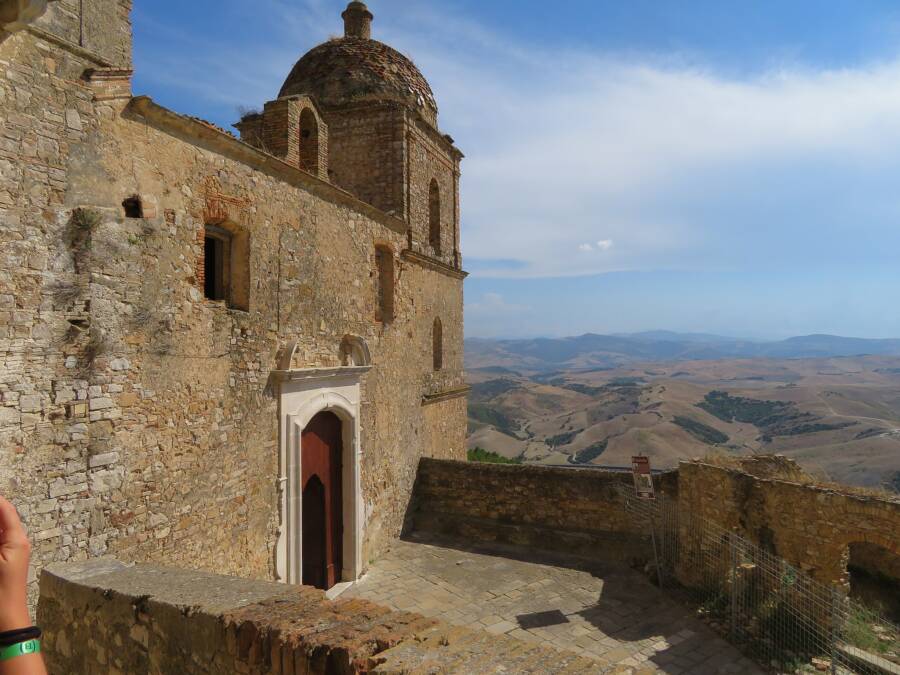 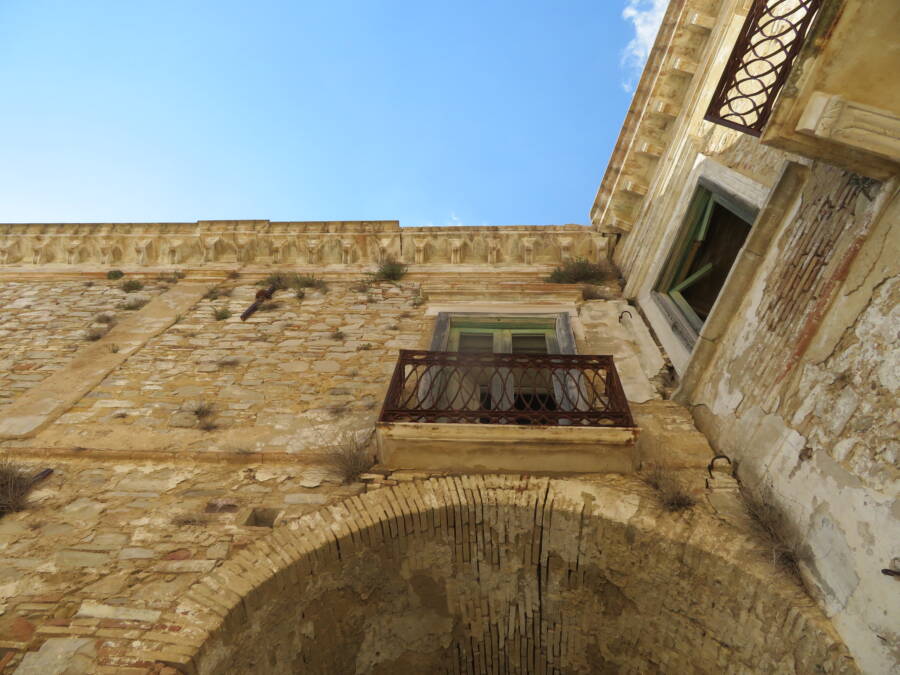 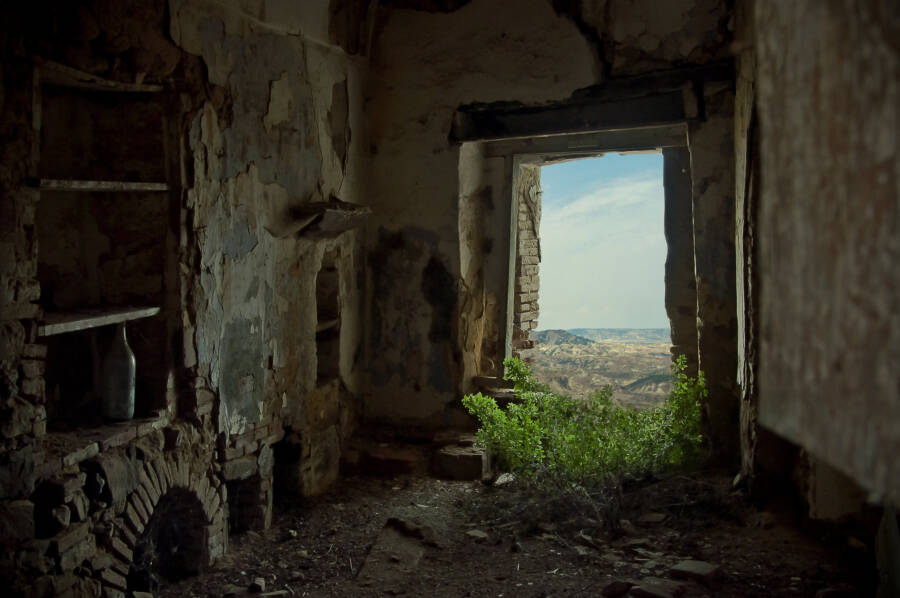 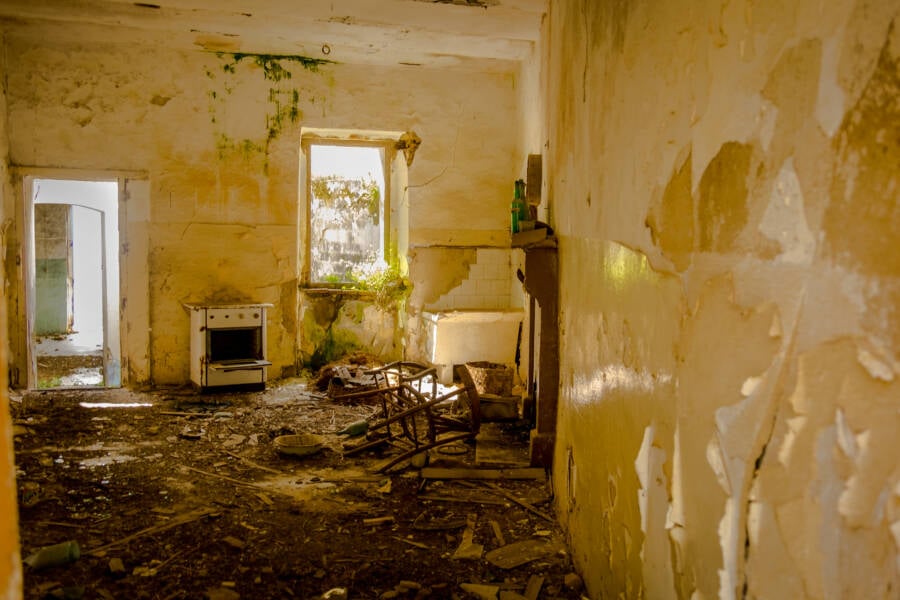 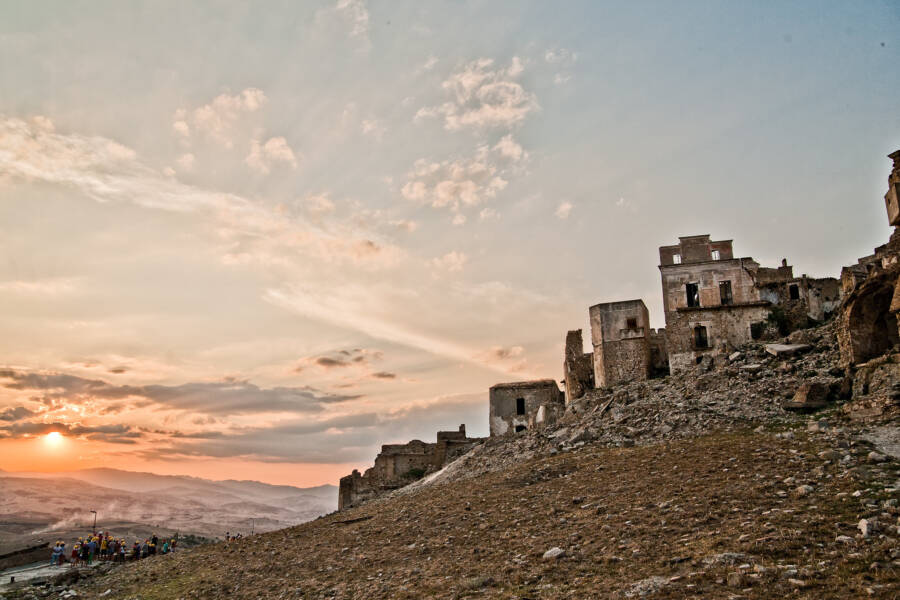 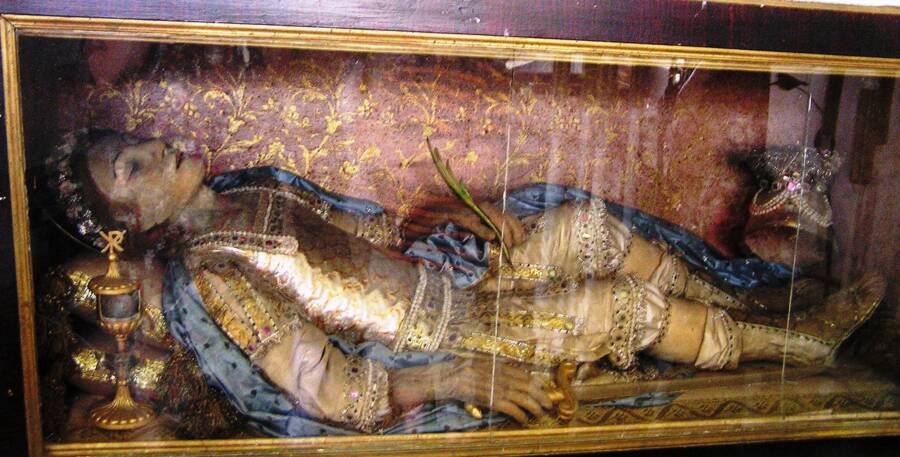 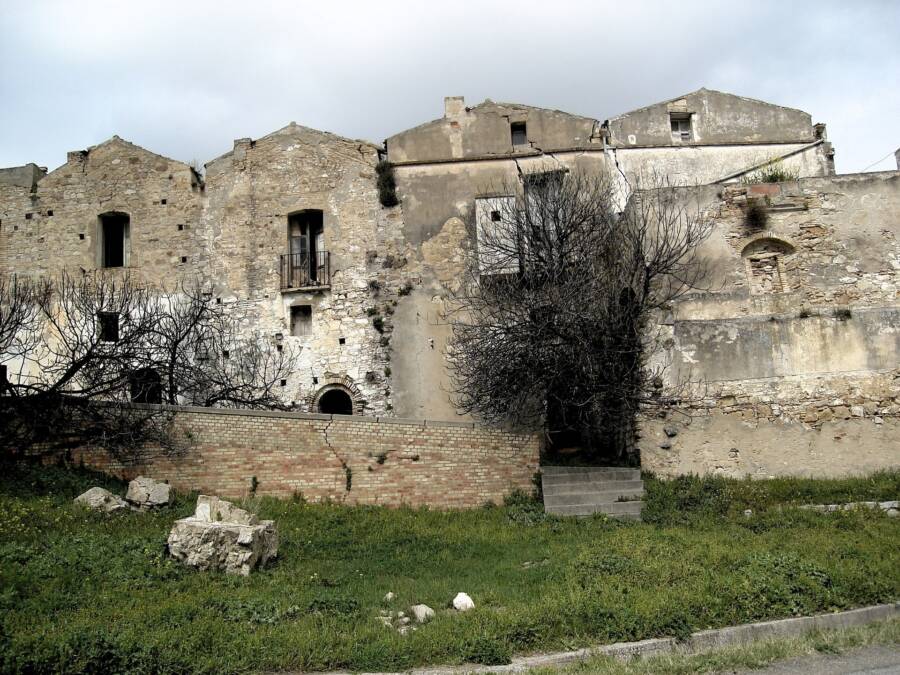 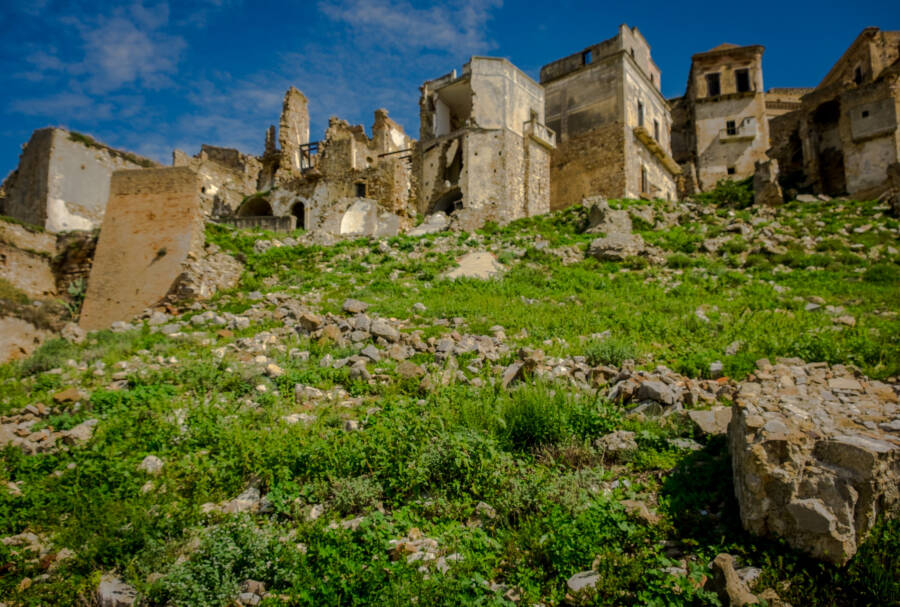 1 of 21
The ancient city of Craco sits atop a 1,300-foot cliff.Giuseppe Milo/Flickr
2 of 21
Basilicata Turistica/Flickr
3 of 21
Joan Nova/Flickr
4 of 21
The hill that Craco is built on is comprised of variegated red, green, and dark gray clay. Joan Nova/Flickr
5 of 21
Davide Lotta/Flickr
6 of 21
Only 35 people are allowed inside the city at any given time, and visitors must be accompanied by a guide.Joan Nova/Flickr
7 of 21
Wikimedia Commons
8 of 21
Michela R./Flickr
9 of 21
Craco natives are called Crachesi or Crachese. They're few and far between, as the city's been mostly abandoned since the 1980s.Joan Nova/Flickr
10 of 21
Dage - Looking For Europe/Wikimedia Commons
11 of 21
Historically, most people in Craco devoted their time to agriculture and raising livestock. But the town boasted its fair share of artisans and doctors as well.Dage - Looking For Europe/Flickr
12 of 21
Joan Nova/Flickr
13 of 21
The town's residents were relocated to Craco Peschiera in the valley below after a series of landslides, floods, and earthquakes.Dage - Looking For Europe/Wikimedia Commons
14 of 21
Dage - Looking For Europe/Flickr
15 of 21
After being evacuated from the crumbling town, the displaced citizens of Craco were forced to live in tent cities and barracks for years as the government struggled to create housing options for the afflicted.elisa greco/Flickr
16 of 21
Joan Nova/Flickr
17 of 21
There is a small church which houses the religious relics of the mummified body of San Vincenzo, the town's martyred patron saint. He's said to have been a soldier in the army of Gen. Massimiliano in 286 A.D. who was killed because he refused to renounce Christianity.Andrea Tomassi/Flickr
18 of 21
San Vincenzo's relic was brought to the town in 1792, and moved to a new church after the old town collapsed. Inside the casket is the waxen body of the martyr, dressed as a Roman soldier.Bob Rubertone/Wikimedia Commons
19 of 21
MeleCoronato/Pixabay
20 of 21
Today, tourists visit Craco to walk its narrow streets, and films use its crumbling walls as a historic backdrop.Joan Nova/Flickr
21 of 21 Even though the residents of Craco, Italy are long gone, the majesty of this medieval hill town remains. Located in the instep of Italy's boot, the once-thriving village stands atop a 1,300-foot cliff overlooking the river valley below.

Defensively, the town's builders got everything right; but enemy attacks were not the cause of Craco's demise.

In fact, the plucky village survived several occupations, plunderers, and some substantial drama brought on by the Unification of Italy. Then the Black Death arrived in the mid-1600s, taking out hundreds of residents. Yet Craco by and large survived; by 1815, it was even big enough to divide into two districts.

Regardless of its strengths, Craco found itself in a Catch-22 regarding its location. While its perch atop a hill kept marauders at bay, exposure to the elements is what effectively brought down the village. Earthquakes, landslides, floods; once residents began evacuating because of these natural disasters, things were never quite the same.

It's no wonder people stayed in Craco for so long — its views are incredible.

Now Craco is effectively a ghost town, reduced to nothing but ancient ruins for half a century.

It's comforting that the grand architecture still keeps diligent watch over Craco, despite the fact that the its only invaders these days are curious tourists and festival attendees. 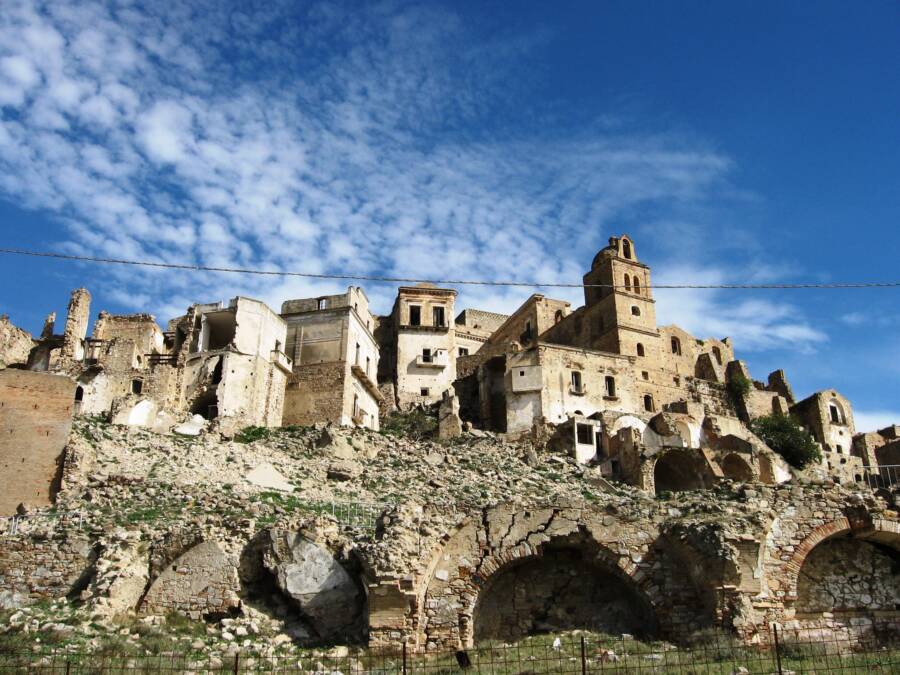 Archaeological evidence suggests humans have lived in Craco since at least the eighth century B.C. Greek monks are believed to have settled there as well after moving inland from the southern coast.

Legend has it that the town was called Monte D'Oro, or "mountain of gold," but in reality it was probably called Grachium, the Latin word for "plowed field."

The first written evidence of the town's existence shows that it was under the possession of a bishop named Arnaldo in 1060 A.D. The town's oldest building, the tall Torre Normanna, predates the bishop's documented ownership by 20 years.

From 1154 to 1168, after the archbishop, the nobleman Eberto controlled the town, establishing Feudalistic rule, and then ownership passed onto Roberto di Pietrapertos in 1179.

A university was established in the 13th century and the population kept growing, reaching 2,590 in the year 1561. By this time, the construction of four large plazas was completed. Craco had its first substantial landslide in 1600, but life went on, and the monastery of St. Peter went up in 1630.

Then, another tragedy hit. In 1656, the Black Death began to spread. Hundreds died and the population dipped.

But Craco wasn't down for the count quite yet. In 1799, the town successfully overthrew the feudal system — only to then fall to Napoleonic occupation. In 1815, a still-growing Craco divided into two separate districts.

After Italy's unification in the mid-19th century, the controversial gangster and folk hero Carmine Crocco briefly conquered the village.

Mother Nature had more in store for Craco. Poor agricultural conditions caused a severe famine in the late 19th century. This spawned a mass migration of the population — about 1,300 people — to North America.

Then came more landslides. Craco had a series of them — plus a flood in 1972 and an earthquake in 1980. Luckily, in 1963, the remaining 1,800 inhabitants were transferred down the mountain to a valley called Craco Peschiera.

Not everyone was willing to move, however. One man native to the tiny town resisted the relocation, choosing to live the rest of his more than 100 years in his native land.

In 2007, the descendants of the immigrants of Craco in the U.S. formed The Craco Society. Their website memorializes the village, saying, "Although 'Craco Vecchio' is no longer inhabited, it remains robust in the minds and hearts of the Crachese people everywhere."

Craco began caving in near the millennium. Buildings in the old town are either collapsed or on the verge of collapse. One of the first monuments to crumble was the WWI statue, inaugurated in 1932. 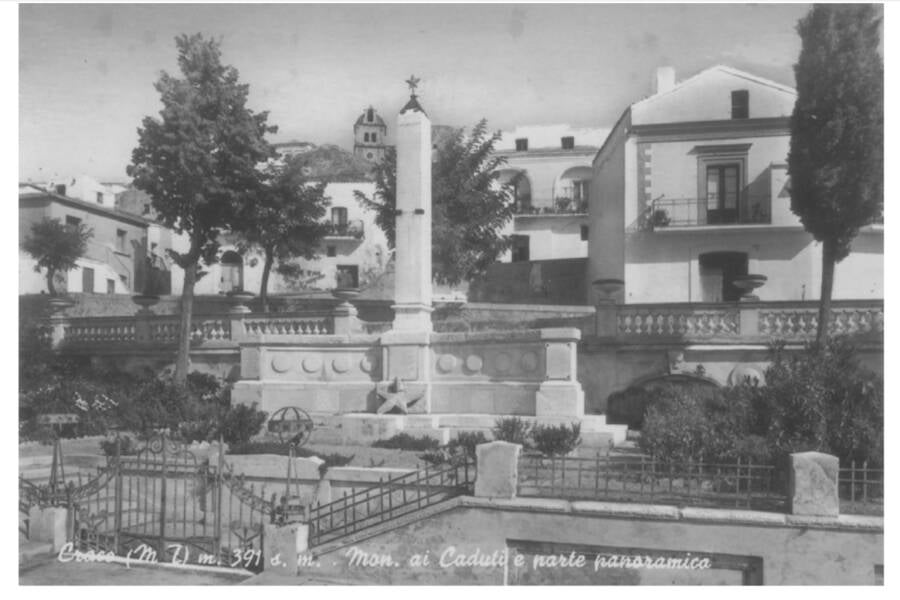 The Craco SocietyCraco's WWI monument, which has since fallen.

Even though Craco is eerily uninhabited, it springs back to life during the religious festivals held there every year. These festivals mainly pay homage to the Virgin Mary (an ancient statue of her was discovered in nearby waters) and San Vincenzo - the martyred patron saint of the town.

Hollywood occasionally features Craco's crumbling ruins in some films. They provided the backdrop for scenes of the 2004 movie The Passion of The Christ and the James Bond flick Quantum of Solace in 2008.

The film crews had to have been pretty small, however, as no more than 35 people are allowed in the city at once. Such limits are necessary to preserve the medieval town's stark beauty.

After learning about Italy's medieval ghost town of Craco, read up on the Turkish ghost town, Burj Al Babas. Then, learn about the gruesome job description of a medieval plague doctor.