Before There Was The Incredible Hulk, There Was Cú Chulainn: The Superhuman Of Irish Myth

The legendary half-god Cú Chulainn was a staple in ancient Irish mythology because of his Herculean strength — and rage.

The legend of Cú Chulainn is among the most popular in Irish folklore. His epic is the center of many hallowed stories in the Ulster Cycle, a collection of first-century mythic legends in Irish literature.

The mythical hero, gifted with great strength and fighting talent, and by some accounts considered a sort of Irish Hulk, lived only 17 years but made a mark on Ireland that survives to this day.

Indeed, while the story of Cú Chulainn itself may be a myth, the prophecy of his birth, that he would live large yet short, proved true.

Cú Chulainn was the ultimate Irish hero. He was recklessly courageous and had the ability to inspire great fear in his enemies.

As the son of Dechtire, sister to King Conor of Ulster, the sky god Lugh, Cú Chulainn appeared to be destined to become nothing less than the perfect synthesis of the Hulk and Hercules.

“You will not encounter a warrior harder to deal with, nor a spear-point sharper or keener or quicker, nor a hero fiercer, nor a raven more voracious, nor one of his age to equal a third of his valour,” it is said of him in Ireland’s most epic legend of him, the Táin Bó Cúailnge, which translates to “The Cattle Raid of Cooley.”

Cú Chulainn was best-known for his moments of rage. Like the Incredible Hulk, he transformed into an unrecognizable creature when impassioned and returned to a sensitive mortal after battle.

As written in the Táin:

“The first warp-spasm seized Cúchulainn and made him into a monstrous thing, hideous and shapeless, unheard of…His heart boomed loud in his breast like the baying of a watch-dog at its feed or the sound of a lion among bears. Malignant mists and spurts of fire flickered red in the vaporous clouds that rose boiling above his head, so fierce was his fury.”

What Cú Chulainn was most famous for, however, was his transformation into the Hound of Ulster. 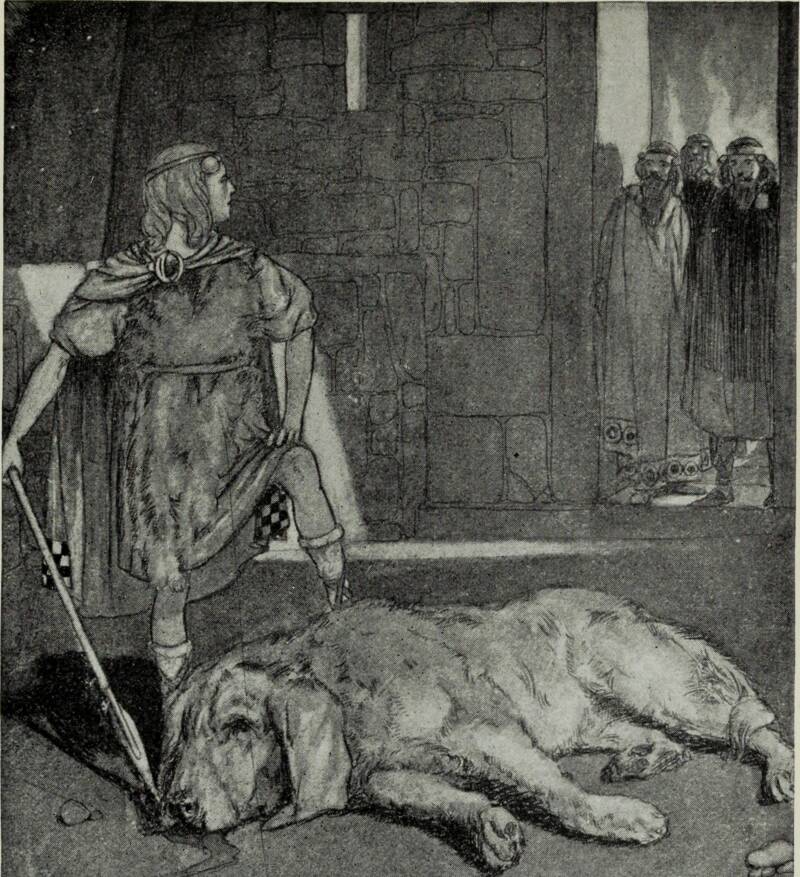 As the legend goes, his uncle, King Conor, asked the boy to accompany him to a banquet at the house of Culain, a blacksmith. The seven-year-old Sétanta was playing a game of hurling with other neighborhood boys at the time, so he replied that he would follow the king shortly.

King Conor went to the feast and forgot about the boy, telling his host that all the expected guests had arrived. The blacksmith unchained his hound dog — a dog that required three chains and nine men to control him — in order to guard the house during the banquet.

Young Sétanta arrived late to the feast and was immediately met by the dog who leaped at him. The boy defended himself by flinging his hurling ball down the animal’s throat and then smashing its head into the ground.

King Conor heard the commotion and ran outside, expecting to find the boy torn to shreds. Instead, he found him unharmed, standing above the dead hound.

Culain, the blacksmith, was distraught to see his fallen dog. He said, “My livelihood is now a livelihood wasted, my husbandry a husbandry lost without my hound…He was defense and protections for my goods and my cattle. He guarded all my beasts for me in field and in house.”

Thus he was given the name Cú Chulainn: the hound of Culain.

The Epic Adventures Of An Irish Hero

This was not Cú Chulainn’s first heroic feat, however, and it is also not even his most legendary.

As the Táin Bó Cúailnge begins, the Queen of Connacht, Medb, and her husband, Ailill, laid together in their bedchamber. Ailill owned a white bull, Finnbhennach, and his wife was determined to grow her wealth by possessing Donn Cuailnge, the brown bull of Cooley and the only rival in the land to Finnbhennach.

This bull, however, was owned by the chief of the Ulstermen.

The Queen sent her army to raid Ulster and steal the bull. Cú Chulainn, with the responsibility as the hound of Ulster, or its protector, was left to single-handedly defend the land.

The 17-year-old fought and defeated every soldier sent his way. Queen Medb continued to send him her best warriors, and Cú Chulainn continued to defeat them. The queen ultimately sent Fer Díad, the champion of Connacht and Cú Chulainn’s own foster brother and close friend.

The two boys were forced to fight, waging a battle that lasted several days. It came to a conclusion when the hero disparagingly slew his friend.

The final battle of the Táin was between the rest of the Ulstermen and Medb’s army. There was also a fight between Finnbhennach the White Bull, and Donn Cuailnge the Brown. The brown bull is victorious but returned to Ulster only to pass away from battle wounds.

Cú Chulainn’s downfall came soon after this epic tale — and at the hands of revenge.

The six sons and daughters of Calatan, a sorcerer who Cú Chulainn had killed, gathered to avenge their father.

During the battle that ensued, the teenage boy was killed by Lugaid Cu Roi, the third son of Calatan.

Cú Chulainn was first mortally wounded, speared by one of the sons. His intestines fell out of his wounds, but the great hero collected his intestines and beckoned his enemies to come at him again.

They did, and decapitated him, thereby ending the brief but brazen life of the Irish Hulk.

The Hero Through Irish History 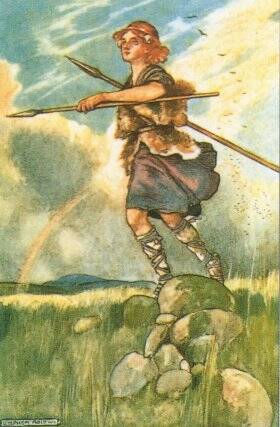 Wikimedia CommonsThe story of Cú Chulainn dates back hundreds, if not thousands, of years.

Cú Chulainn’s tale was originally passed down through oral tradition and told as a story to young Irish children.

The mythology of Cú Chulainn was not officially written down until 800 years ago in the Táin Bó Cúailnge. Since then it has been filtered through various interpretations and translations.

During the 19th and early 20th centuries, writers revisited Celtic mythologies and reinvigorated them for a modern audience. As such, the legends of Cú Chulainn were revived.

Wikimedia CommonsA statue Of Cú Chulainn at a post office in Dublin.

One of the writers who brought the legend of the hero back into modern culture was none other than Theodore Roosevelt, who wrote an essay on ancient Irish mythology for The Century magazine in 1907.

The article was accompanied by an illustration of Cú Chulainn by the artist J.C. Leyendecker. The hero is drawn with a spear and shield in hand and riding into battle on an embellished chariot.

It became the most famous image of Irish mythology, portrayed on penny pamphlets all across Ireland in the 20th century.

Cú Chulainn has since been featured in pop-art posters, rock albums and superhero comics. Each of these take inspiration from his famous 1907 portrait.

The masterpiece was unveiled at the General Post Office in Dublin in 1935 and it is now the official memorial to the 1916 Easter Rising when Irish nationalists organized a rebellion against British rule.

During the unveiling, Irish leader Éamon de Valera described the statue as a “memorial to the men who gave their lives for Ireland.”

Because of this, the image of Cú Chulainn has been used as a symbol for Irish nationalists.

He is seen as the ancient defender of Ireland and a portrayal of resilience against invaders. The statue of him has also been reproduced on commemorative coins and medals in Ireland.

However, this image has also since been used by Ulster unionists or loyalists from Northern Ireland. They consider him a hero defending the north from Republican nationalists and have created controversial murals of the hero in Belfast.

Now that you know the legend of the Hound of Ulster, read about Tomoe Gozen, Japan’s most fearsome female samurai. Then check out these harrowing images from the 30-year war in Northern Ireland, birthplace of Cú Chulainn.