The True Story Of Saint Patrick, The Roman British Slave That Became The Symbol Of Irish Pride 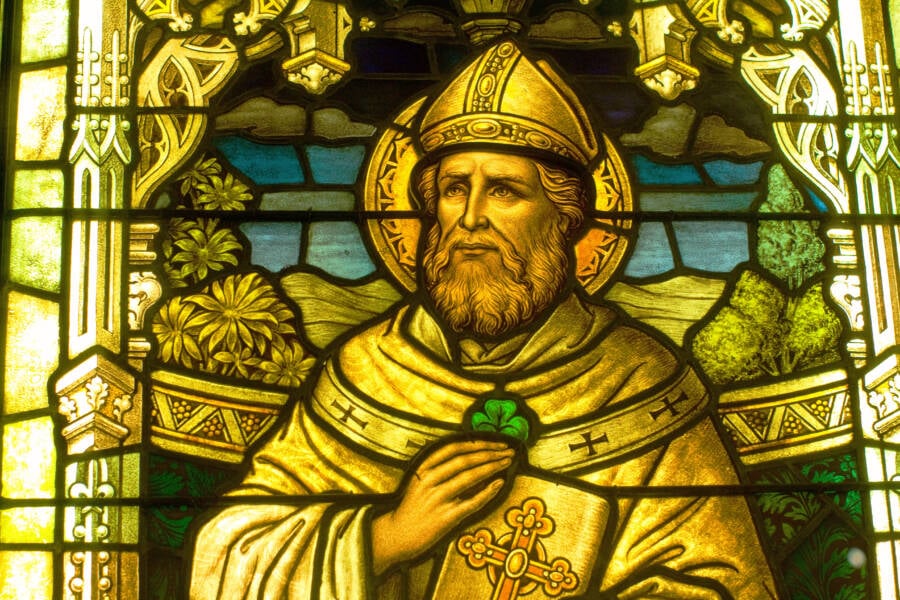 FlickrThe life of St. Patrick is filled with outlandish myths and folklore, though what is known to be true might be stranger than the fiction.

We’re all very familiar with St. Patrick’s Day — even if most of the memories we accrue on March 17 are lost to the ether by March 18. The purpose and aesthetic are quite clear, however: to drink beer, wear green, and celebrate the saint who rid Ireland of its snakes.

From shamrocks and leprechauns to the isle’s slithering infestation eradicated through prayer, the iconography and religious symbolism of St. Patrick have permeated the U.K. and America’s culture now for several centuries.

But who was this Saint who is said to have performed miracles? It’s high time to take a look at St. Patrick himself to distinguish supposed fact from commonly accepted fiction.

The Early Life Of St. Patrick

Only two historical records that are commonly accepted as being authored by St. Patrick have survived. These texts are the only primary sources on St. Patrick and they are the Declaration (Confessio in Latin) and the Letter to the soldiers of Coroticus. In these, St. Patrick himself describes his life.

For starters, Patrick was probably not even Irish — and Patrick wasn’t even his real name. Ireland’s patron saint was actually born named Maewyn Succat in the late 300s A.D. in a town in Roman Britain called Venta Berniae, otherwise known as Bannaventa Berniae or Bannavem Taburniae, which is actually believed to have been somewhere in modern-day Wales by some accounts. Though this point is hotly debated among scholars, St. Patrick was nonetheless not a born Irishman.

Though he begins his Confessio by proclaiming “My name is Patrick,” the young man was previously known to others as “Magonus,” “Succetus,” and then “Cothirthiacus” before he was renamed “Patricius” or “Padrig” once he was baptized. 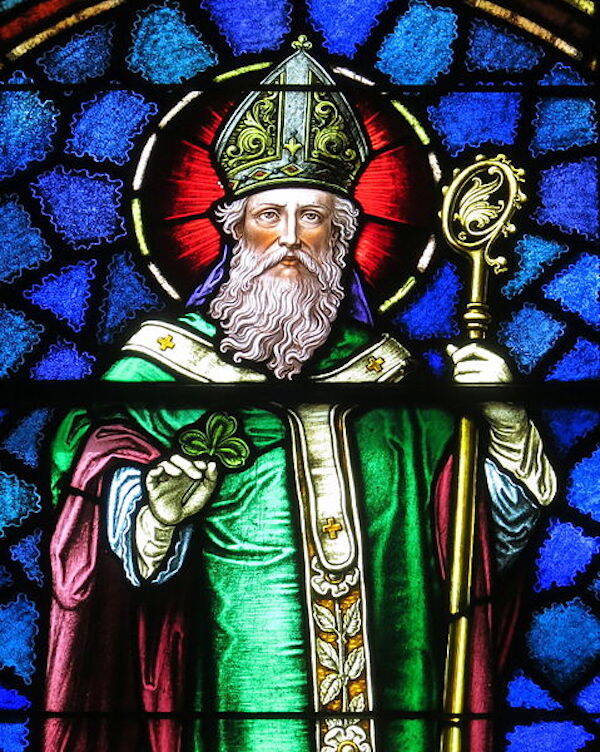 Patrick’s father, Calpurnius, was a deacon in the Christian church which was in its fairly nascent stages at the time. The future saint, however, wasn’t very religious as a youth. As he described in his own writings, his home was wealthy and comfortable but that life came to a bitter end when he and a group of his people were captured by Irish pirates. Patrick was just 16 years old then, and soon after this debacle developed a strong faith.

These pirates weren’t merely looters or lawbreaking vagabonds, but actual slave traders. Patrick was to be sold as a slave in Ireland.

Patrick was forced to labor as a shepherd for six full years. It was during this period that he made the decision to convert to Christianity.

As his own writings revealed, he was “humbled every day by hunger and nakedness” during his six years tending cattle.

He began a voracious prayer routine. According to his Declaration, he prayed 100 times per day. Patrick was also naturally enveloped by the language and culture of Ireland, picking up and instilling both before making his first escape attempt to Britain.

One night, as St. Patrick wrote, a strange voice called to him and said, “Look, your ship is ready!” He felt this divine intervention meant that the time had come for him to make a break from his bondage. He trekked 200 miles to Ireland’s east coast and pleaded to come aboard a Britain-bound ship.

The pagan captain, however, didn’t quite trust Patrick. He demanded that St. Patrick “suck his breasts” as a sign of his submission to the captain’s authority. Patrick allegedly refused to do so and instead tried to convert the ship’s crew to Christianity at which point, the captain relented and allowed him passage.

After three days at sea, St. Patrick landed in Britain and his shipmates wandered a “wilderness” for 28 days, exhausted from starvation, while Patrick prayed for food. When a wild boar appeared shortly after, the group’s faith in Patrick’s connection to God grew substantially.

Patrick, himself, had another divine dream during this time that Satan tested his faith by dropping a boulder on him. Trapped and crushed under its weight until dawn, he called out “Helias!” Surely, the Greek sun-god would help. Suddenly, the rock disappeared.

“I believe that I was helped by Christ the Lord,” he later wrote. 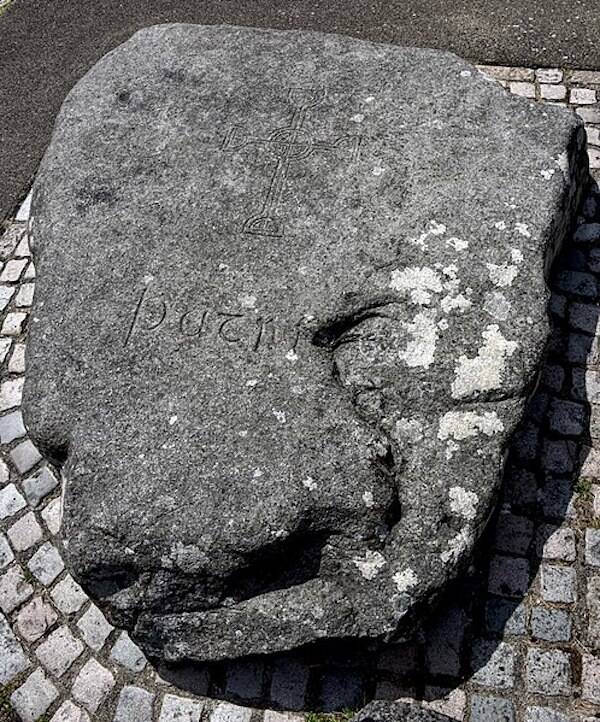 Wikimedia CommonsThe purported gravestone of St. Patrick in the churchyard of Down Cathedral. Downpatrick, Ireland.

Patrick would be visited again by the divine in another vision once he was able to return home a few years later. This vision urged him to fulfill his God-given purpose: as a missionary in the pagan lands of Ireland, where he was once held hostage.

“I saw a man coming, as it were from Ireland. His name was Victorious, and he carried many letters, and he gave me one of them. I read the heading: ‘The Voice of the Irish.’ As I began the letter, I imagined in that moment that I heard the voice of those very people who were near the wood of Foclut, which is beside the western sea — and they cried out, as with one voice: ‘We appeal to you, holy servant boy, to come and walk among us.'”

Thus, Patrick began his training as a bishop and returned to Ireland. 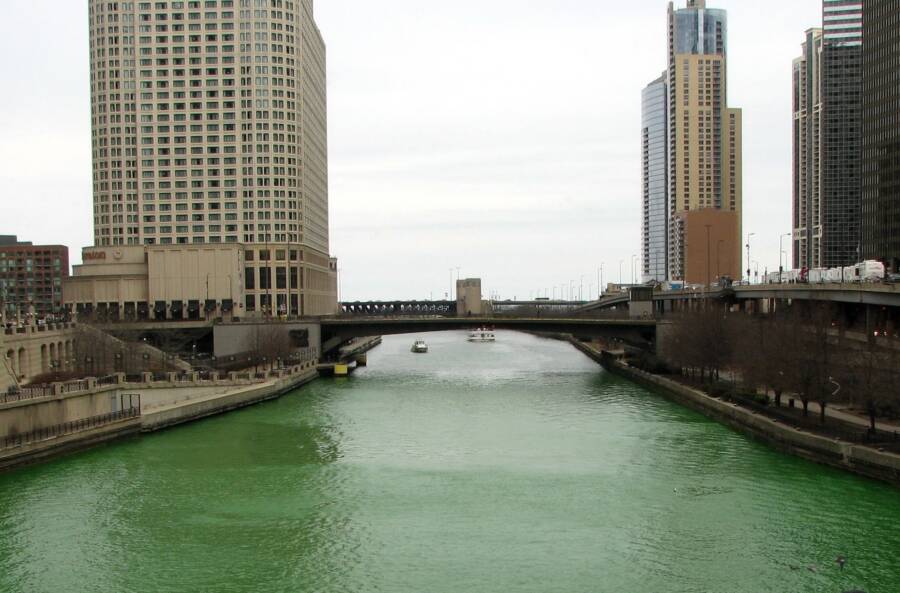 Wikimedia CommonsChicago dyes the Chicago River green each year in celebration of St. Patrick’s Day. While the green color itself is certainly historically relevant, green beer is not.

Spreading Christianity around Ireland wasn’t easy for Patrick. His preaching was not welcomed and he was forced to operate mainly on small islands off the Irish coast.

“Every day there is the chance that I will be killed, or surrounded, or taken into slavery,” he wrote.

But Patrick’s fellow Christians felt his struggles on Ireland were justified.

A few years into Patrick’s religious mission, his fellow bishops became aware of a story about Patrick that seemed to have haunted the man for years. From what, exactly, this mysterious guilt stemmed has never been clearly understood — but Patrick wasn’t pleased to hear that his colleagues had learned of and were now gossiping about it.

“They brought up against me after thirty years something I had already confessed…some things I had done one day — rather, in one hour, when I was young,” he wrote.

Whether his trespasses consisted of financial gain from his devotees, worship of forbidden idols or some youthful sexual experimentation will likely never be known. Regardless, Patrick’s colleagues thus came to feel that his struggles in Ireland — as a slave and then as a missionary — were penance for this deed. 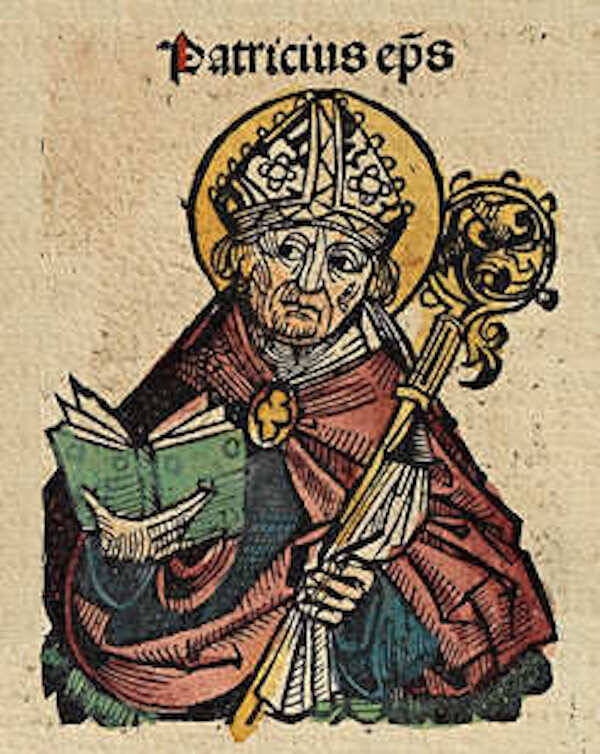 Wikimedia CommonsA woodcut of Ireland’s patron saint in the Nuremberg Chronicle of 1493.

Patrick did eventually begin to amass a substantial following and moved onto the mainland once he was able. While the size of his congregation isn’t generally agreed upon — some gauge it around 100,000 — Patrick did baptize thousands of people during his time in Ireland.

Patrick also ordained new priests and helped women to become nuns, converted the sons of regional kings, and helped form more than 300 churches. This, arguably, was the phase that brought him from a mere man of faith to the mythical St. Patrick we celebrate today.

Indeed, people began mythologizing the man through literary legends and folklore even in his own time.

What Did St. Patrick Do To Become A Legend?

Even two centuries after his death, the people hungered for fantastical stories about St. Patrick that weren’t included in his own writings. Naturally, followers crafted with some pretty outlandish escapades.

Footage courtesy of Pathé of the London Irish Rifles receiving shamrocks on St. Patrick’s Day between 1914 and 1918.

One legend dating to 700 A.D. describes Patrick’s duels with Irish religious figureheads called druids. These spiritual leaders insulted the patron saint and attempted to poison him and engage him magical duels. The story was filled with spells that manipulated the weather, had characters survive blazing infernos, and had both sides destroy the other’s sacred texts.

In the climax, one druid blasphemed the Christian God which then led St. Patrick to use his might and magic to send the druid flying into the heavens. When he landed, his skull split open, and the sacrilegious druids were defeated.

A National Geographic segment on why we celebrate St. Patrick’s Day.

An alternate legend from around the same time saw Patrick fasting on a mountain for 40 days. His exhaustion and hunger made him mad. He cried, threw things around, and childishly refused to descend until an angel sent by God granted him some grandiose demands.

Patrick commanded that the angel make it so he redeemed more souls from hell than any other saint and that he alone could judge Irish sinners at the end of times instead of God, himself. Finally, he asked that the English would never rule Ireland.

Of course, that last demand clearly showed the agenda of those who authored the legend at the time. But the manner in which modern society celebrates the man is arguably even more preposterous.

Legend has it that Patrick himself implemented the Shamrock in his teachings, using the three-leaf clover to relay to the Irish the concept of the Christian Holy Trinity. Though this is entirely unfounded.

Another ubiquitous yet utterly unfounded assertion is that Patrick somehow banished all of the snakes from Ireland — even though there were none there to begin with. Reptiles never migrated across the prehistoric land bridge that connected Ireland to mainland Europe. 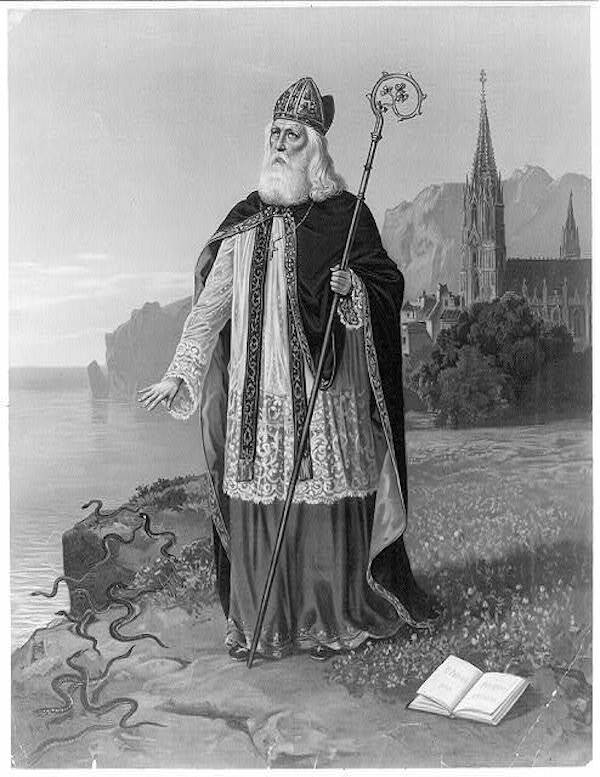 Library of CongressOne of the most popular fables to this day is that St. Patrick prayed all of Ireland’s snakes off the island, even though they never migrated to the country in the first place.

Finally, it is time to debunk the celebration of the Saint himself.

St. Patrick’s day began as a religious celebration in the 1600s. It both marked the patron saint’s death on March 17, 461 A.D., as well as commemorated his arrival in Ireland. Often referred to as “St. Patrick’s Feast Day” it has since become something else entirely.

While this may have been how celebrations started, it’s certainly not how they’ve ended up today. This cultural shift began in the early 18th century when Irish immigrants transported the tradition to the early American colonies.

St. Patrick quickly became the immediate, go-to symbol of Irish culture and heritage and was arguably brought into mainstream recognition all the more by symbols like the clover and even leprechauns.

The very first St. Patrick’s Day parade in the U.S. was held in Boston in 1737. Shortly after that, parades were held in most cities with a healthy Irish population. With the enormous groundswell of Irish immigration to America in the 19th century, of course, it practically became a party that anyone — Irish or not — happily participated in. 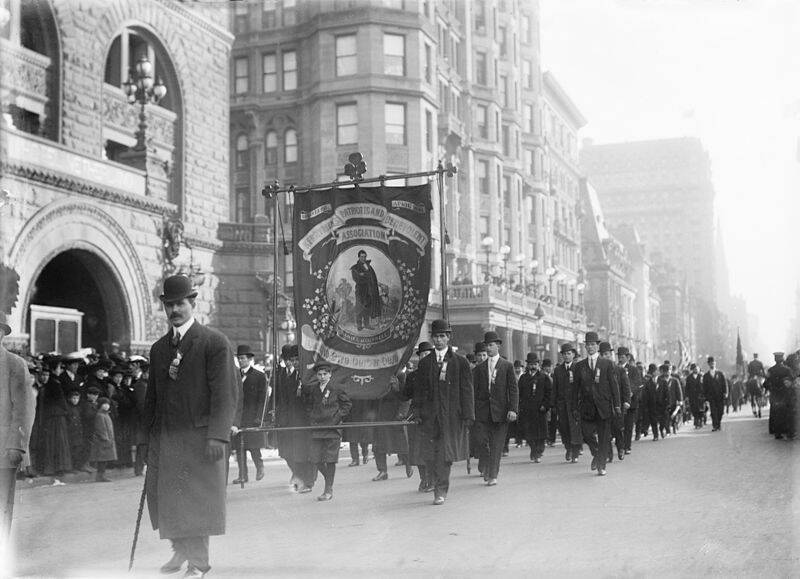 In 1903, St. Patrick’s Day became a national holiday in Ireland. The day is now celebrated all over the globe. But as we’ve seen, leprechauns and green beer have nothing to do with St. Patrick — but celebrating the heritage of the Irish does.

As Rev. Jack Ward, a Baltimore Irish-American priest said with a hearty chuckle to Baltimore Magazine:

“Drinking green beer doesn’t make you Irish, it just makes you pee. Real Irish men and women have a place in their heart for St. Patrick.”

After learning about St. Patrick and the legacy he inspired, read about how Mother Teresa was perhaps more harmful than good. Then, learn about the seven most unusual religious rituals and beliefs.