Inside The Little-Known Dark Side Of Mother Teresa

In 2016, the famous nun Mother Teresa was declared a saint by Pope Francis — but many people say she doesn't deserve it. 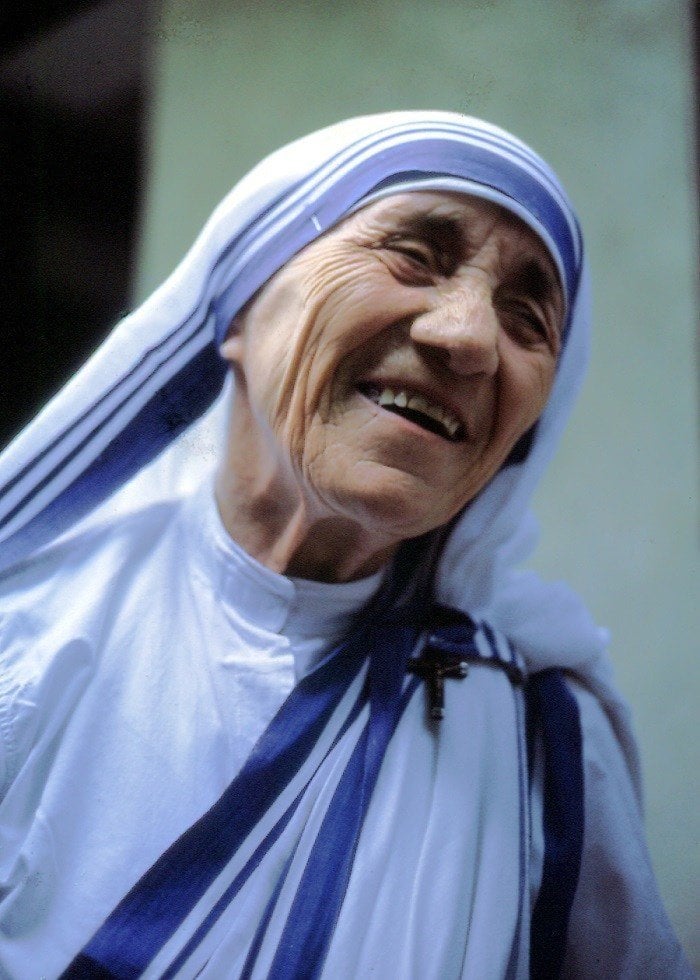 Mother Teresa racked up a disturbing legacy on her way to becoming a saint. Wikimedia Commons

Ever since the Vatican made Mother Teresa a saint in 2016, the response has been controversial and polarizing.

In order for Mother Teresa to achieve sainthood, the Vatican had to recognize two miracles that the famous nun performed after her death. Pope John Paul II recognized the first miracle in 2003, just six years after she died in 1997. And Pope Francis recognized the second miracle in 2015.

The popes claimed that Mother Teresa performed miracles when she cured one woman and then one man of their respective tumors. However, these “miracles” have been disputed by some — especially since a doctor who worked on the woman’s case said that she had been treated with drugs.

But debates over Mother Teresa’s miracles didn’t dissuade the Vatican from moving forward with its plans. Pope Francis officially proclaimed Mother Teresa a saint on September 4, 2016. But the decision remains controversial, and the dispute over her miracles is just one small part of it.

Of course, Mother Teresa’s sainthood may seem well-deserved to some. After all, she cultivated a mostly sparkling reputation as a selfless humanitarian while she was alive. But in recent years, her image has lost its luster. And when you take a closer look at her story, it’s not hard to see why. 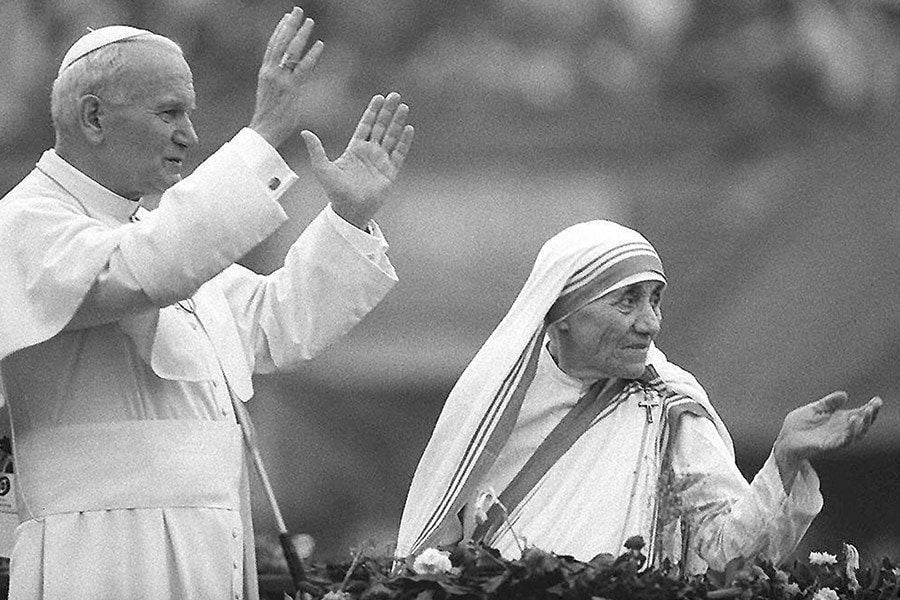 Mother Teresa was intent on converting as many people to Catholicism as possible, even at the expense of the poor and sick.

No one builds a church purely for the love of God — especially in places like India where critical services, like hospitals, are lacking. Religious groups that erect churches in these areas do so not just out of the kindness of their hearts, but to increase the number of people who believe in their faith.

Like those missionaries, conversion — the Church’s key to survival — was Mother Teresa’s primary goal. And in the context of the Catholic Church, charity can be viewed as a self-interested act.

“It’s good to work for a cause with selfless intentions,” said Mohan Bhagwat, the head of a Hindu nationalist group. “But Mother Teresa’s work had ulterior motive, which was to convert the person who was being served to Christianity. In the name of service, religious conversions were made.”

And when The New York Times reviewed the British documentary Hell’s Angel, a film that highlighted some of Mother Teresa’s flaws, the paper concluded that she was “less interested in helping the poor than in using them as an indefatigable source of wretchedness on which to fuel the expansion of her fundamentalist Roman Catholic beliefs.”

Still, some argue that even if Mother Teresa had ulterior motives, at least the people she cared for were better off for it. But others who have actually visited and worked in her medical centers wholeheartedly disagree.

The Horrific Conditions At Mother Teresa’s Medical Centers And Missions 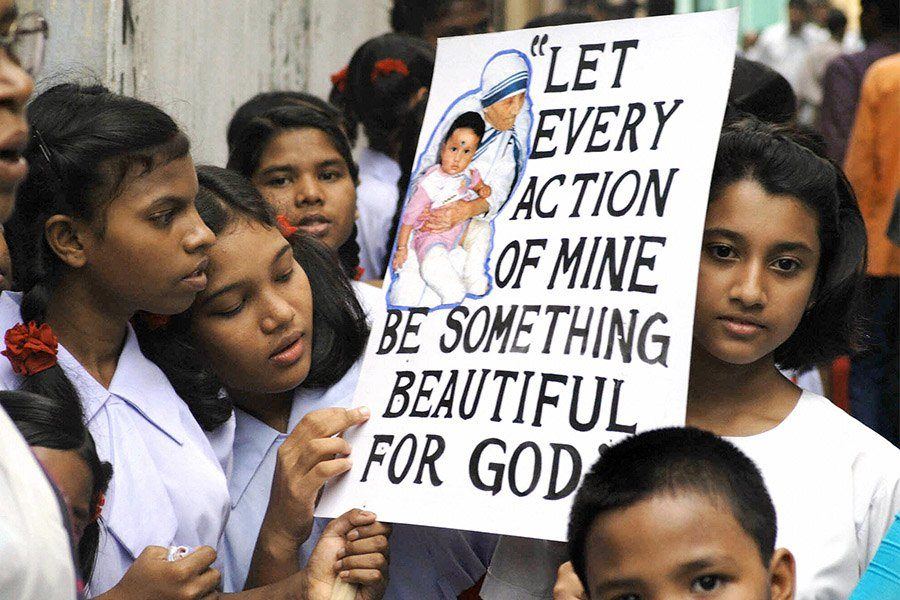 DESHAKALYAN CHOWDHURY/AFP/Getty ImagesA group of Indian schoolgirls hold a poster during a march celebrating the beatification of Mother Teresa in 2003.

Though Mother Teresa’s medical centers were meant to heal people, her patients were often subjected to conditions that made them even sicker. In the same documentary, an Indian journalist compared Mother Teresa’s flagship location for “Missionaries of Charity” to photographs that he had seen of the Bergen-Belsen concentration camp in Nazi Germany.

“Workers washed needles under tap water and then reused them. Medicine and other vital items were stored for months on end, expiring and still applied sporadically to patients,” said Hemley Gonzalez, a noted humanitarian who briefly volunteered at Missionaries of Charity.

Gonzalez continued, “Volunteers with little or no training carried out dangerous work on patients with highly contagious cases of tuberculosis and other life-threatening illnesses. The individuals who operated the charity refused to accept and implement medical equipment and machinery that would have safely automated processes and saved lives.”

It wasn’t just volunteers who criticized Mother Teresa’s treatment of patients, either. In her hospice care centers, Mother Teresa practiced her belief that patients only needed to feel wanted and die at peace with God — not receive proper medical care — and medical experts went after her for it.

In 1994, the British medical journal The Lancet reported that medicine was scarce in her centers and that patients received nothing close to the treatment that they needed to relieve their pain.

Meanwhile, some doctors took to calling her missions “homes for the dying” since her Calcutta home for the sick had a mortality rate of more than 40 percent. But in her view, this wasn’t necessarily a bad thing.

In response to all the criticism, Mother Teresa allegedly said, “There is something beautiful in seeing the poor accept their lot, to suffer it like Christ’s Passion. The world gains much from their suffering.”

However, when it came to her own suffering, Mother Teresa apparently took a different stance. When she began experiencing severe heart problems, she received care in a modern American hospital.

The Questionable Company That Mother Teresa Kept Throughout Her Life 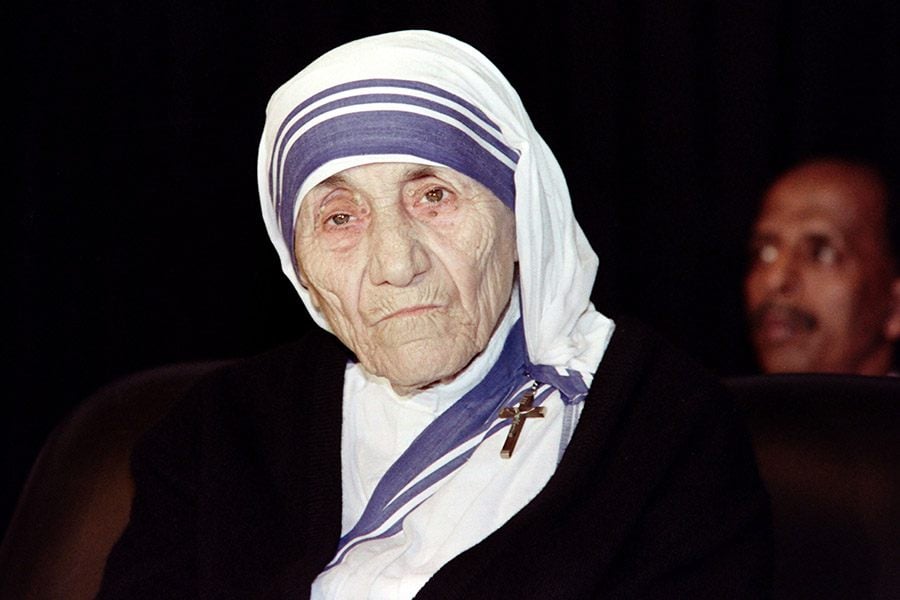 While neglecting the needs of the sick, Mother Teresa was also called out for rubbing elbows with several wealthy — and corrupt — world leaders.

This included Haitian dictator Jean-Claude Duvalier, who was eventually charged with crimes against humanity for his abuse of his fellow Haitians.

At one point, 60 Minutes released footage that showed Mother Teresa praising Duvalier’s wife Michele. In the footage, Mother Teresa said that she had “never seen the poor people being so familiar with their head of state as they were with her. It was a beautiful lesson for me.”

That wasn’t the only friendship that raised eyebrows. Mother Teresa also received $1.25 million from her friend Charles Keating.

Keating was one of the key figures behind the 1980s savings and loan crisis, brought about by housing market and loan speculation, which cost American taxpayers $124 billion. And while he was on trial, Mother Teresa wrote to the judge presiding over his case — seeking clemency for him.

“I do not know anything about Mr. Charles Keating’s work or his business or the matters you are dealing with,” she said. “I only know that he has always been kind and generous to God’s poor and always ready to help whenever there was a need. It is for this reason that I do not want to forget him now while he and his family are suffering.”

Though a co-prosecutor of Keating actually responded to Mother Teresa after his conviction — and pointed out that one of the people Keating stole from was a poor carpenter — he never got a response from her.

And that wasn’t the only issue related to Mother Teresa’s finances.

The Enduring Mystery Of Where Mother Teresa’s Money Went 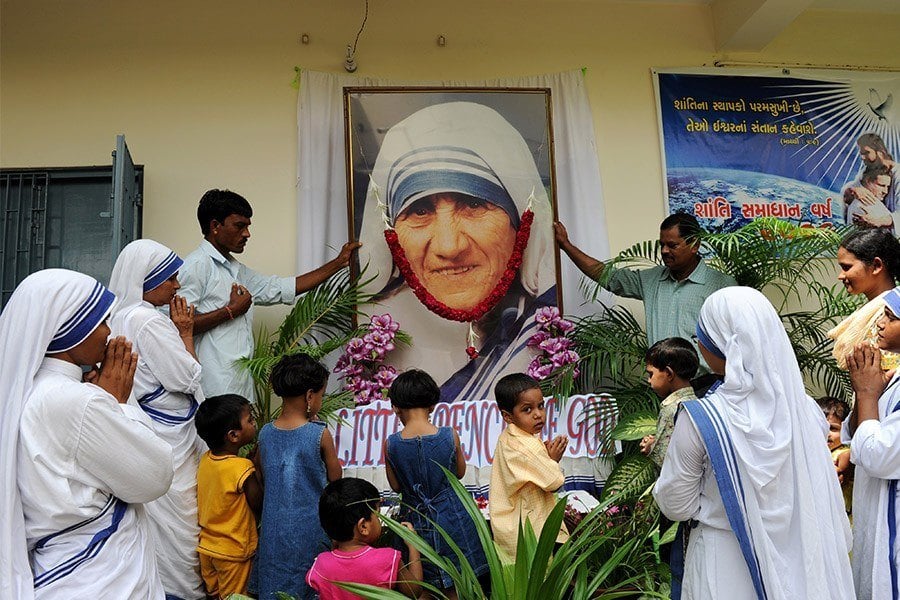 SAM PANTHAKY/AFP/GettyImagesNuns pray by a portrait of Mother Teresa 12 years after her death. This was before Mother Teresa became a saint.

Countless well-meaning Catholics gave money to Mother Teresa’s charitable organizations throughout the years, but many of them would never see their generous donations go toward good works.

Keating’s $1.25 million donation alone would seem large enough to lift all of those in her care out of poverty, but one volunteer said that “even when bread was over at the soup kitchens, none was bought unless donated.”

Once, after running up an $800 tab at a grocery store to feed people at her charity, Mother Teresa refused to get out of line until someone else paid.

A 1991 report in the German magazine Stern also estimated that only seven percent of the millions of dollars she received were used for charity.

But seven percent of what total figure, exactly? The world will never know. Nirmala Joshi, the leader of Missionaries of Charity who succeeded Mother Teresa, said the donations were “countless,” and there was only one person with the actual numbers. “God knows,” Joshi said. “He is our banker.”

One is left to wonder where all of that money was actually going — and what happened to it after Mother Teresa’s death. 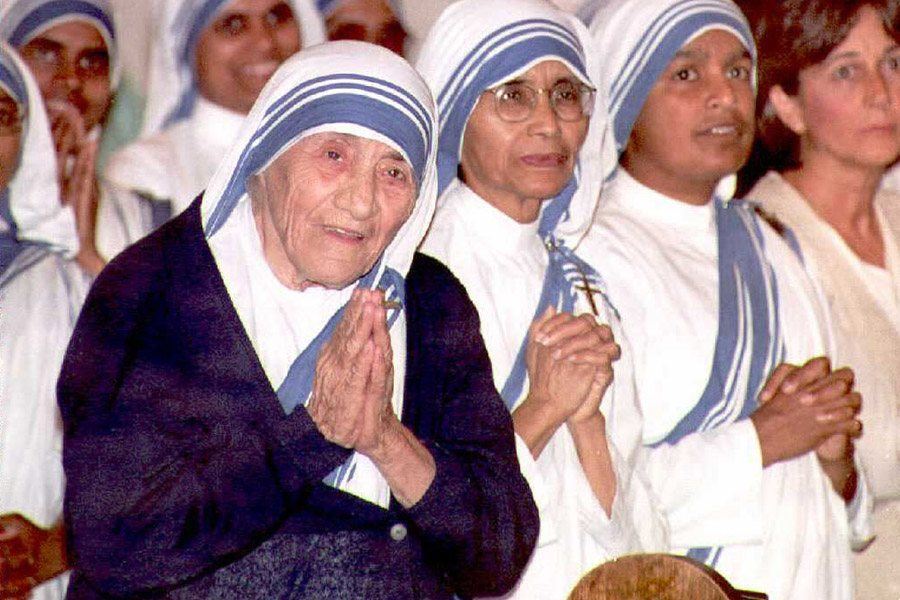 Though it’s not surprising that a Catholic nun would be against abortion, Mother Teresa still raised eyebrows when she discussed her stance while she was accepting the Nobel Peace Prize in 1979.

In reference to Bosnian women who had been raped by Serbs and who were seeking abortions for their unwanted pregnancies, Mother Teresa said, “I feel the greatest destroyer of peace today is abortion, because it is a direct war, a direct killing — direct murder by the mother herself.”

She also rallied against birth control, claiming that “natural family planning” would solve the woes of women who were not ready for a child.

What Mother Teresa did promote in the realm of family planning — like abstinence — didn’t help anyone, either. And despite abstinence-only education being proven ineffective, she still stuck by her claims.

But even though she gained some critics for views like these, Mother Teresa was mostly successful at avoiding controversy while she was alive. However, a glimpse of her “dark side” would slip through the cracks every so often — especially when it came to her infamous homes for the sick.

In hindsight, these issues are hard to ignore today. And it’s also difficult to understand why the Catholic Church decided to make Mother Teresa a saint. She may have been revered for helping the poor and the sick, but her practices ensured that they were mired in pain until their final moments.

After reading about the controversial decision to make Mother Teresa a saint, learn about Hans Schmidt, the only Catholic priest ever executed. Then, take a look at the bizarre battle between the Vatican and cats.