Who Killed Biggie Smalls? Inside The Unsolved Shooting Of Brooklyn’s Hip-Hop King

The Notorious B.I.G. was at the height of his fame when he was murdered in Los Angeles in 1997. And to this day, no one knows who shot Biggie Smalls.

A quarter-century ago, Biggie Smalls’ death in Los Angeles shocked the hip hop world. The rapper, born Christopher Wallace and also known as The Notorious B.I.G., was 24 years old when unidentified shooters fired four bullets into his body and peeled off into the night. Ever since, fans have asked: Who killed Biggie Smalls? 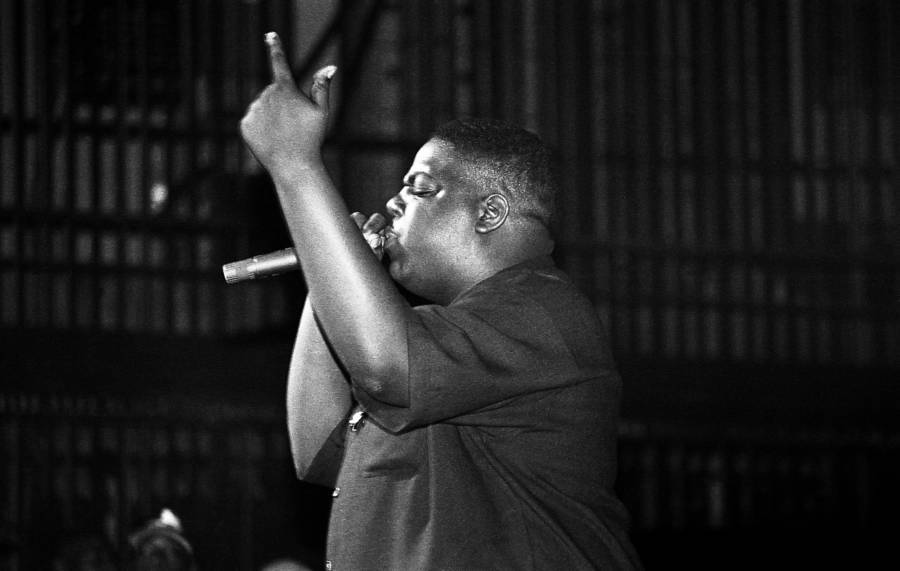 In Los Angeles to promote an album and attend industry events, Wallace and his entourage left a Vibe magazine party in three SUVs at 12:30 AM on March 9, 1997. They stopped at a red light on Wilshire Boulevard and South Fairfax Avenue 15 minutes later when a Chevrolet Impala SS pulled up and fired off shots before vanishing.

Who killed Biggie Smalls? The answer might be far more scandalous than anyone ever knew.

From Christopher Wallace To The Notorious B.I.G.

Born on May 21, 1972, in Brooklyn, New York, Christopher George Wallace came of age during a difficult time for New York City, which had narrowly avoided declaring bankruptcy in 1975 and drastically slashed social services in the years following. His father left the family when Wallace was two, and his mother, Voletta Wallace, worked two jobs to keep the family afloat.

By age 12, Wallace began dealing drugs. By 17, he had dropped out of school.

Things grew serious when Wallace was arrested on a weapons charge and received a suspended five-year sentence in 1989. He was arrested for violating his probation within a year and sentenced to nine months in jail for dealing cocaine in 1991. Fortunately, Wallace had also begun to record himself rapping.

He soon stopped merely rapping on street corners of his Bedford-Stuyvesant neighborhood and recorded a short demo tape. When editors of The Source got their hands on it, they profiled him in their pages. Sean “Puff Daddy” Combs, an A&R executive trying to start his own label, found Wallace immediately to sign him.

Wallace’s single “Party and Bullshit” was released in June 1993. That year he forged a friendship with Tupac Shakur, who was already a star and served as a wisened peer. When his debut album, Ready to Die, dropped in 1994, The Notorious B.I.G. became New York royalty.

But three years later, his reign would be cut short in a matter of seconds.

Christopher Wallace traveled to Los Angeles in February 1997 to film a music video for a new album. It had been three years since someone shot Shakur outside of a New York recording studio. He survived but felt betrayed by Wallace, whose song “Who Shot Ya?” seemed aimed at Shakur. Tragically, the coincidence ended their friendship. 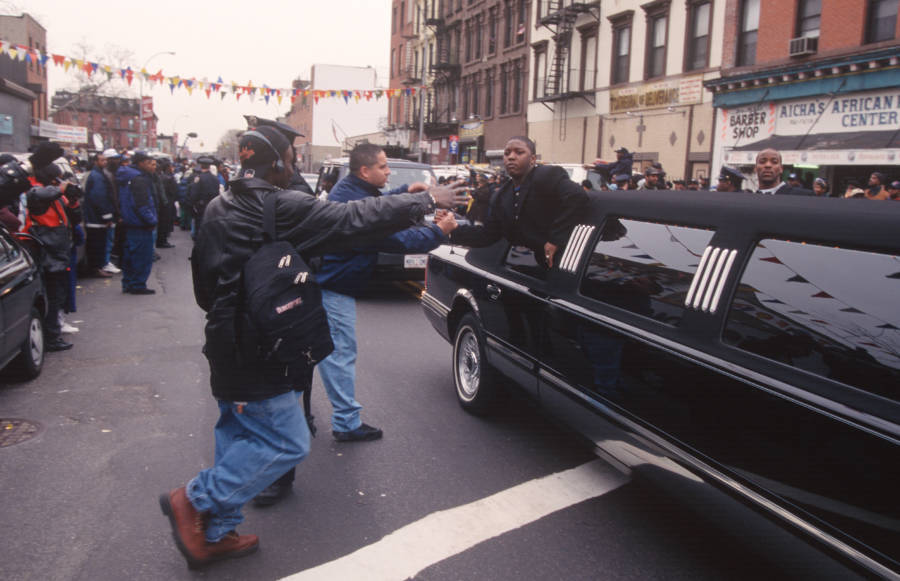 It also led to a bitter bicoastal rivalry between Wallace and Combs in New York and Shakur and producer Suge Knight in California. Then, on September 13, 1996, Tupac Shakur was murdered in Las Vegas, marking the first of two unsolved killings that defined the tragic hip hop feud.

Wallace spoke solemnly about Shakur and his passing in every interview. He had recently recovered from a car accident that saw him rely on a cane. But in L.A., he finished filming his “Hypnotize” video and spoke at the Soul Train Music Awards on March 7. He spent the next day in meetings at the Westwood Marquis Hotel.

That night, Wallace and his entourage went to a Soul Train Awards after-party sponsored by Quincy Jones and Vibe magazine at the Petersen Automotive Museum in Miracle Mile. Combs later recalled that none of his Bad Boy Records peers felt the posh area posed any danger before Biggie Smalls’ death.

Despite the fire department shutting things down for being overcrowded at 12:30 a.m., Wallace left in good spirits after posing for pictures with fans. Trickling into three cars, Combs and his bodyguards filled the lead SUV while Wallace and his crew jumped into a Suburban, both trailed by security in a Chevrolet Blazer.

After Combs rushed through a yellow light on Wilshire Boulevard and Fairfax Avenue, Wallace and his security were left idling on red, sitting in the passenger seat. That’s when a white Toyota Land Cruiser wedged itself between the two cars, and a Chevrolet Impala pulled up alongside Wallace to fire four shots.

An hour into March 9, Biggie Smalls was dead.

Who Killed Biggie Smalls And Why?

For FBI Agent Phil Carson, the answers about Biggie Smalls’ death were clear. His 2003 report outlined that the target was Combs, but the shooters mistook Wallace’s car for his. As for the shooter who killed Biggie Smalls, he pointed at Amir Muhammad. He was not only an alleged hitman but the godparent of LAPD Officer David Mack’s children. 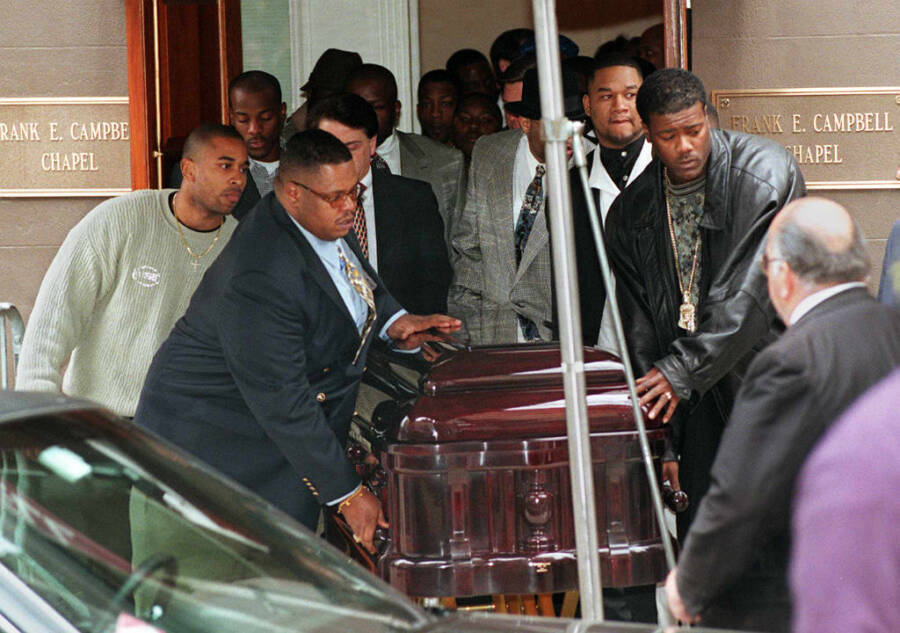 STAN HONDA/AFP/Getty ImagesBiggie Smalls casket is carried to his hearse on March 18, 1997.

Mack was a central figure in the citywide Ramparts corruption scandal, in which more than 70 LAPD officers in an anti-gang unit were found to have engaged in misconduct, including many Knight hired to serve as bodyguards of his Death Row Records label.

Ominously, Carson claimed he “had evidence that LAPD officers were involved and I was shut down by the LAPD and city attorneys inside Los Angeles.”

According to Carson’s report, “Amir Muhammad, AKA Harry Billups, the godparent to LAPD Officer David Mack’s two children, has been identified by several sources as the trigger man. Mack is a registered owner of a 1995 Black SS Impala with chrome wheels, the exact description given as being driven by Wallace’s shooter.” 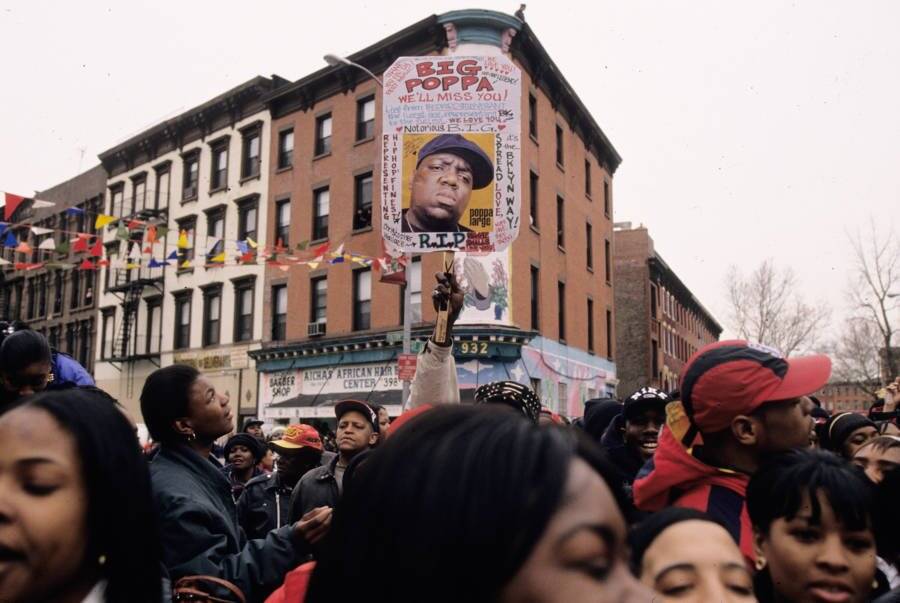 And in 2009, LAPD officer Greg Kading discovered evidence that Suge Knight, who was imprisoned at the time, ordered the hit in retaliation for Shakur’s murder from behind bars. Both Kading and the FBI took a witness statement from a woman who said she visited Knight and served as an intermediary to instruct the shooters.

“She said that Suge told her, ‘I want you to get a hold of Poochie,'” said Kading. “‘Figure out what type of money it’s going to cost and tell him that the is what I want done.’ So she then… meets with Poochie, they agree on an amount… she pays Poochie, and he goes and sets himself up at the Petersen Auto Museum.”

Tragically, neither Tupac’s murder nor Biggie Smalls’ death appears any closer to being solved. Shakur’s mother is long dead. Suge Knight is in prison for unrelated manslaughter. And Sean Combs is still producing music. Only Voletta Wallace remains, grieving, hopeful for justice — and a final answer to who killed Biggie Smalls.

After learning about the Notorious B.I.G.’s death, take a look at 44 photos of ’90s hip hop. Then, learn why some believe Kurt Cobain was murdered.