Tupac Shakur was gunned down in a drive-by shooting in Las Vegas on Sept. 7, 1996. The rapper was only 25 years old when he was hospitalized for his fatal injuries. Just six days later, he succumbed to his wounds. All that remains today is a legion of loyal fans and the enduring mystery of who killed Tupac Shakur.

Theories range far and wide, from police corruption to industry rivals Christopher “Notorious BIG” Wallace and Sean “Puffy” Combs setting him up. Even the notion that Shakur faked his own death slowly began to take hold, with his murder remaining officially unsolved to this day.

While some theories are more baseless than others, most evidence points to Shakur’s fight with Southside Crips gang member Orlando Anderson as part of the motive. Not only did these two men have a history, but individuals close to them have since come forward to give their thoughts.

The Early Life Of A Rap Legend

Tupac Amaru Shakur was born on June 16, 1971, in Harlem, New York. Before becoming a hip-hop icon, he came into the world shortly after his mother Afeni Shakur was released from prison.

Though Afeni faced a trial on bombing charges as a member of the Black Panthers Party, she successfully defended herself in court. In doing so, she revealed a gift for public speaking that her son would clearly inherit.

Tupac’s mother remained a staunch activist for civil rights and named her son after an Incan revolutionary killed by the Spanish in the 1700s. 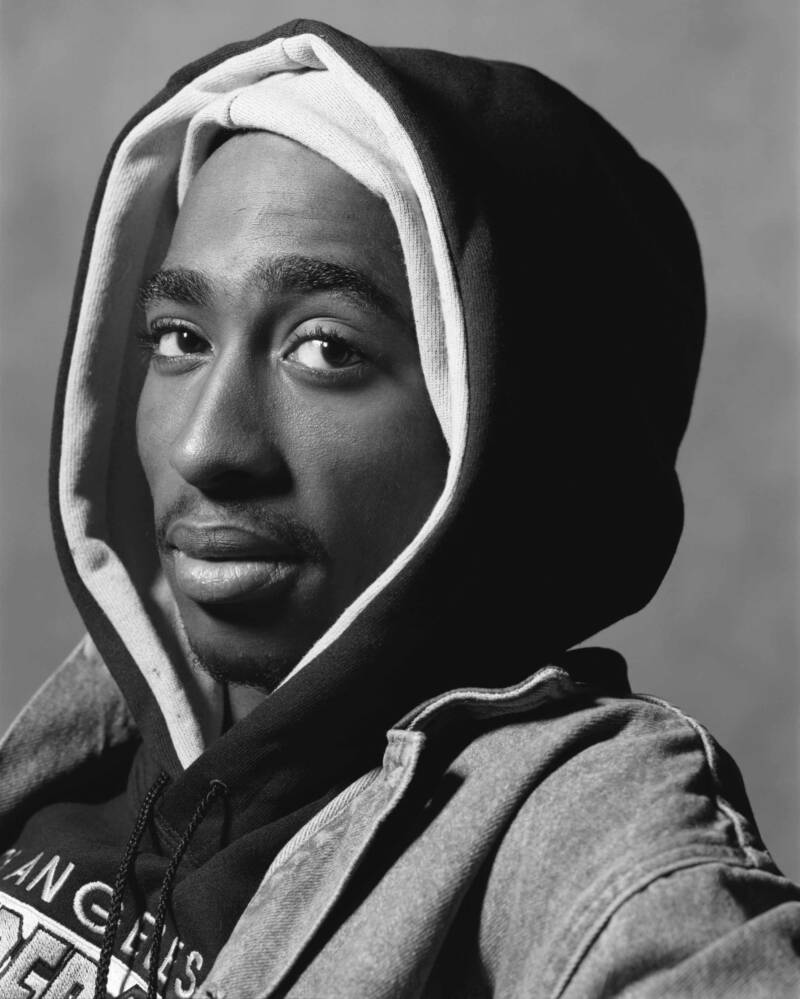 Wikimedia CommonsTupac Shakur during the release of his debut album in 1991.

As a struggling single mother, Afeni moved her family around constantly — and often relied on shelters to take them in. Though a move to Baltimore saw Tupac feel “the freest I ever felt” while enrolled at the Baltimore School of Arts, the family soon relocated to Marin City, California.

Tupac began to deal crack, while his mother began to smoke it. Fortunately, his love of music would slowly steer him away from a life of crime, at least temporarily. He became a roadie and dancer for Digital Underground, before his debut album 2Pacalypse Now jumpstarted his rap career in 1991.

He used his elevated platform to speak passionately about the plight of black Americans whenever he could.

In October 1993, he shot two off-duty Atlanta police officers. The charges were dropped when it was revealed the cops were drunk and that Shakur had likely shot them in self-defense. While his star continued to rise, Shakur’s entanglements with fellow artists and various gangs did as well. 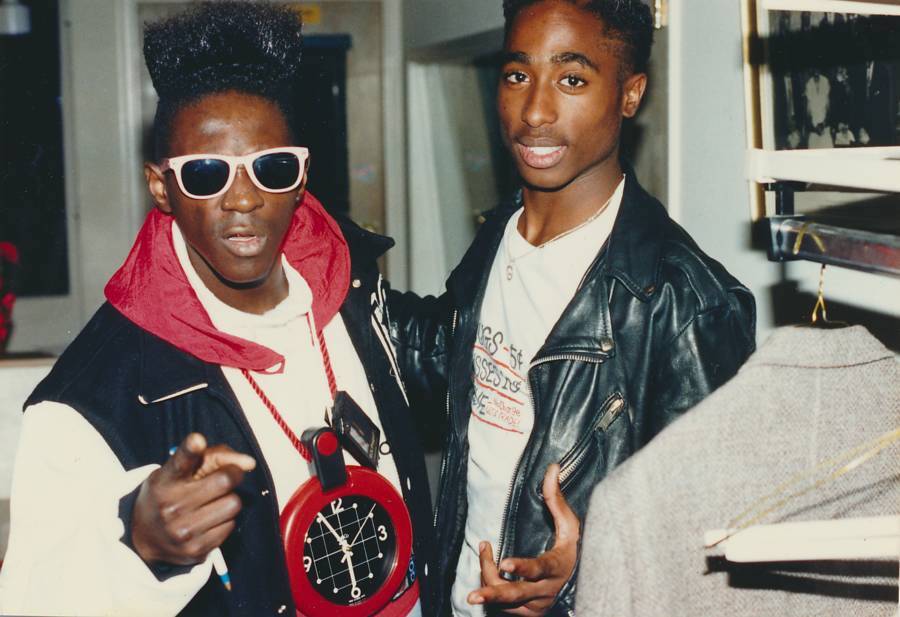 Clarence Gatson/Gado/Getty ImagesTupac as a roadie for Digital Underground, backstage at the 1989 American Music Awards with Flava Flav.

It was the 1994 incident at Quad Recording Studios in Manhattan that arguably marked Shakur’s point of no return. He was shot by three men in the lobby, after refusing to give up his belongings. More paranoid than ever, he checked himself out of Bellevue Hospital hours after surgery against medical advice.

With Notorious BIG and Puffy recording in the same building that night, Shakur was convinced they set him up. He later publicly broadcast as much in interviews.

But it would be Notorious BIG’s diss track, “Who Shot Ya,” released in 1995, that would escalate tensions to the extreme. Since the song came out just a few months after the shooting, Shakur believed it was directed toward him. Before long, the East Coast/West Coast rivalry was in full swing.

The Death Of Tupac Shakur

Tupac Shakur met Death Row Records co-founder Suge Knight while in prison on rape charges. Shakur was later released but agreed to sign to Knight’s label if he posted the rapper’s $1.3 million bail. This union would only cause Shakur trouble in the future, as Knight was linked to the Bloods — a gang fiercely at odds with the Crips. 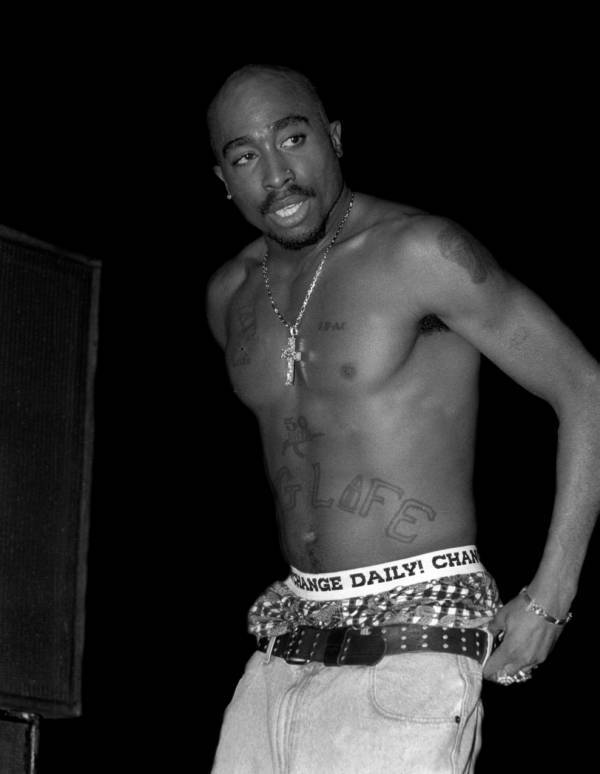 Raymond Boyd/Getty ImagesTupac performs at the Mecca Arena in Milwaukee, Wisconsin in 1994.

Though he got the tattoo years earlier, Shakur’s “Thug Life” phase arguably began after his release in October 1995. His lyrics were more boastful and hostile than ever, and he insulted artists with gang ties like Mobb Deep with reckless abandon.

Within just a few months of Shakur releasing “Hit ‘Em Up” — the most famous hip-hop diss track ever recorded and one aimed squarely at Notorious BIG, Puffy, and Bad Boy Records — Shakur was dead. The escalating tensions in his music tragically began to mirror real-life violence.

It was after 11 p.m. on September 7, 1996, when Tupac Shakur was gunned down in Las Vegas. With the rapper riding shotgun, Suge Knight was driving to Club 662 after the pair saw Mike Tyson’s fight at the MGM Grand Hotel.

The gunshots came from a white Cadillac, which pulled up beside them at a red light, and peeled off to never be seen again. Shakur was hit four times: once in the arm, once in the thigh, and twice in the chest. One of the bullets entered his right lung.

Officer Chris Carroll was the first to arrive. He described Shakur’s limp body as nearly falling out of the car while Knight retained all of his faculties despite his head gushing blood from his own injuries.

“After I pulled him out, Suge starts yelling at him, ‘Pac! Pac!,'” said Carroll. “And the guy I’m holding is trying to yell back at him. He’s sitting up and he’s struggling to get the words out, but he can’t really do it. And as Suge is yelling ‘Pac!,’ I look down and I realize that this is Tupac Shakur.” 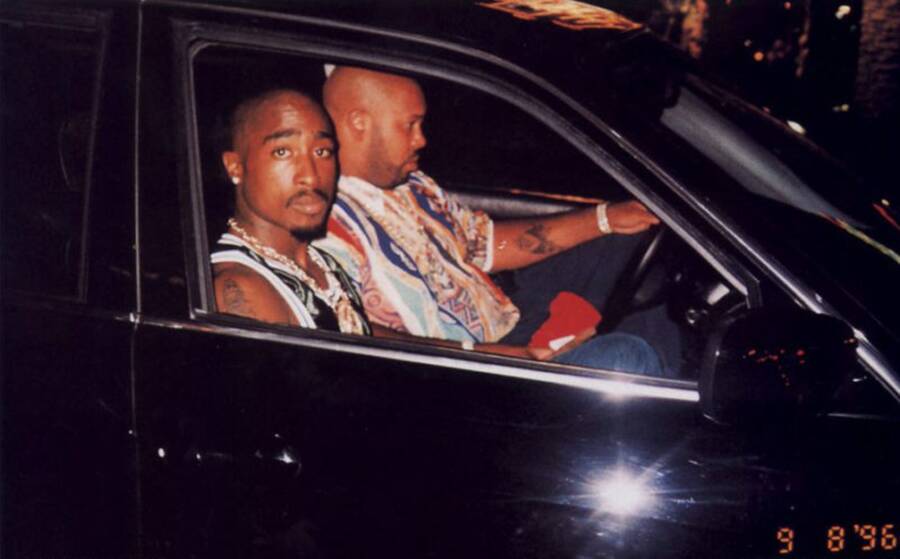 “And that’s when I looked at him and said one more time, ‘Who shot you?'” Carroll recalled. “He looked at me and he took a breath to get the words out, and he opened his mouth, and I thought I was actually going to get some cooperation. And then the words came out: ‘Fuck you.'”

After his famous last words, he spent the next six days fighting for his life at the University Medical Center of Southern Nevada. After being put on life support and put under an induced coma, Tupac Shakur died from internal bleeding on September 13, 1996.

How Did Tupac Die?

While Combs has firmly denied these allegations, Davis did admit in 2018 that he and his nephew, Orlando Anderson, were in the infamous Cadillac in Las Vegas that night. The history between Shakur and Anderson only lent further credence to this claim of who killed Tupac Shakur.

Security footage of the MGM Grand Hotel the night of the murder showed Shakur jumping Anderson. Weeks prior, Anderson purportedly stole a Death Row necklace from one of the label’s members, prompting Shakur’s reaction to attack him.

Davis claimed that he and Anderson were aware of Shakur’s plans to attend Club 662 later that night, but almost gave up when he didn’t show. But Shakur had only just left the hotel when Davis, Anderson, Terrence “T-Brown” Brown, and DeAndre “Dre” Smith spotted him upon leaving in the car.

“If he wouldn’t even have been out the window [signing autographs] we would have never seen him,” said Davis.

While Davis denied he was the triggerman, he revealed the following: Anderson and Brown were in the back — and one of them was the shooter. He refused to give any further information “for the code of the streets.” Anderson himself was killed two years after Shakur.

Countless fans believe Tupac Shakur is alive and well, while others believe the government had him killed. The argument for the latter is largely that his family had ties to the Black Panthers and that he helped unite poor black Americans against police. On top of that, he had already shot two cops.

Later investigations into the LAPD Rampart scandal showed clear corruption among the force, with some officers working with gangs such as the Bloods. Some believe the answers lie there.

Most recently, a strange series of Instagram posts by Suge Knight’s son claimed Tupac was alive. But photos of individuals resembling the rapper have cropped up around the world for decades, fueling an ever-persistent theory that he faked his own death. A man claiming to be part of the rapper’s security team even said he helped smuggle him into Cuba.

These theories are likely appealing as they let the brilliant young musician live out peacefully in the minds of millions. Tragically, the simpler explanation that he was murdered in Las Vegas is far more convincing. One need only look at the faces of his devastated friends and family to reassess.

Ultimately, the reason Tupac Shakur’s death remains so difficult to bear is because he gave a needed voice to black America — and a middle finger to a system of oppression that continues to harass people of color like him.

Finally, the brilliance of his lyricism was in its permanence — with allusions of living on after death, seeing his own passing, and coming back for revenge striking a chord that has yet to fade.

After learning about the continued mystery of who killed Tupac Shakur, read about Assata Shakur, the first woman on the FBI’s Most Wanted list. Then, learn about Latasha Harlins, a young black girl killed over a bottle of juice.