On Halloween 1993, Tupac Shakur tried to stop two white off-duty cops from harassing a Black driver in Atlanta. But when one of them pulled his gun, Tupac shot first in self defense. 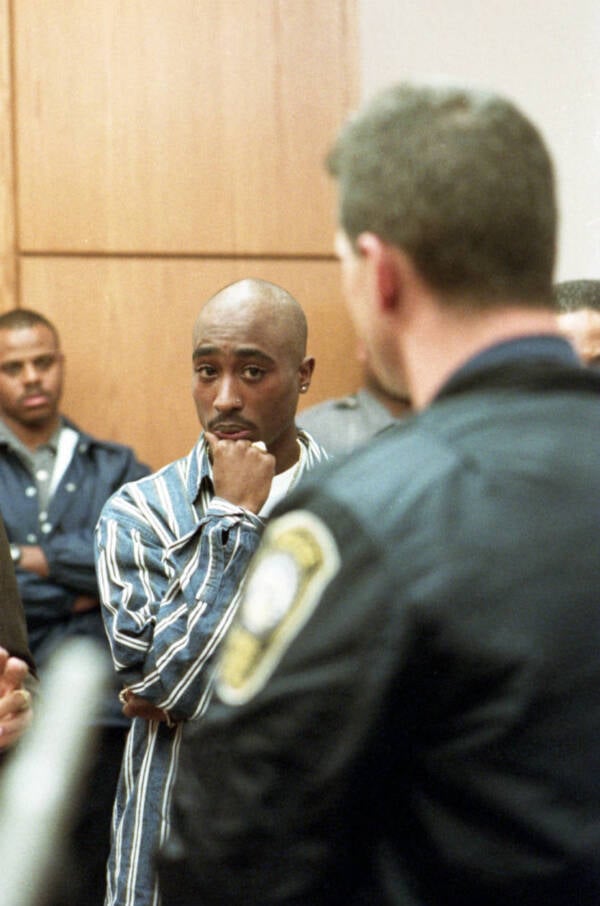 The son of a Black Panther, Tupac Shakur promoted self-defense in the face of societal racism, particularly against police brutality. And in the early 1990s, he was a common sight at the Compton Gun Range, where he and friends would pass the time and target practice.

Then, early in the morning of Oct. 31, 1993, he shot three times at two white men who pulled a gun on him outside his hotel in Atlanta, Georgia — not knowing they were off-duty cops. Police arrested him the next morning and charged him with two counts of aggravated assault.

While two versions of the story persist, investigators found Shakur’s most credible. The 22-year-old had just performed at Clark Atlanta University when a street altercation turned violent. Spotting two drunk men harass a Black motorist, Shakur intervened to help — and shot in self-defense when one of the off-duty officers brandished his gun.

The incident came a mere month before Shakur was ambushed and shot five times at Quad Studios in New York. From then on, he would switch permanently into the “Thug Life” rebel who trusted no one and lived a life of paranoia. Tragically, his morbid fears were proven right when he was mysteriously murdered in Las Vegas in 1996.

Born Lesane Parish Crooks on June 16, 1971, in New York City, he was renamed Tupac Amaru Shakur after an Incan revolutionary killed by Conquistadors and “Shakur” after his stepfather. His mother, Afeni Shakur, was a Black Panther and raised him in the party’s revolutionary spirit. But he also attended art school, where he studied poetry and ballet.

And while his mother had been a forceful activist who stood trial against bombing charges, Shakur used music as his call to action. By the time of Shakur’s violent police confrontation in 1993, he had already found rap success with his 1991 debut album 2Pacalypse Now and 1993 follow-up, Strictly 4 My N.I.G.G.A.Z…. 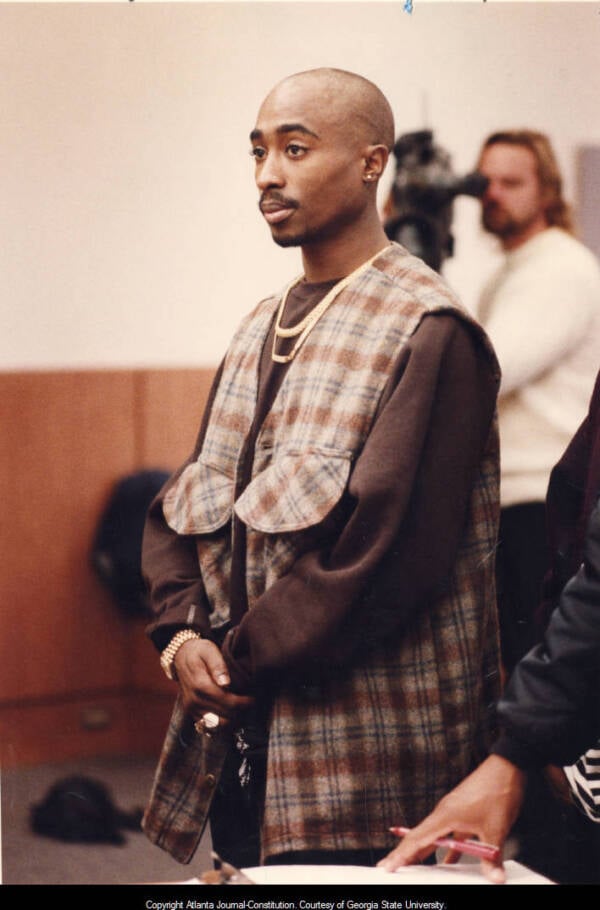 Georgia State University LibraryTupac during his preliminary hearing in Atlanta Municipal Court the day after the shooting on Nov. 1, 1993.

On Oct. 30, 1993, Tupac performed at Clark Atlanta University. And in the early hours of Halloween, he and his caravan of cars were heading back to the Sheridan Hotel to celebrate the show, with Tupac in the front car. But when they arrived, they saw two white men beating a Black driver in the middle of the road, blocking the hotel entrance.

Meanwhile, Clayton County officer Mark Whitwell, 33, and his brother, Henry County officer Scott Whitwell, 32, and their two wives had just finished celebrating Scott’s wife passing the bar exam at the hotel. When they left and began to cross the street, they said they were nearly struck by an unrelated driver when an argument began.

This altercation is what Tupac and his crew drove into.

“It looked like a fight. And as we got closer we seen it was two white guys jumping a Black dude,” said rapper E.D.I. Mean, who was in one of the rear cars. “And immediately Pac just jumped out of the car.”

When Tupac jumped out, everyone in the caravan followed. And then, according to Atlanta Police Department Captain Herb Carson, “One of the officers pointed a gun toward the group.” Later, during the hearing, Mark admitted that it was him.

Dressed in plain clothes, the Whitwell brothers were not immediately recognizable as police officers. Whether they identified themselves as such before brandishing a firearm has remained unclear. But what happened next isn’t.

The Whitwells were visibly intoxicated, and Shakur responded to the drawn gun by pulling out his own. Then, Mark Whitwell smashed Tupac’s car window with the butt of his pistol and Tupac fired three shots from his 9mm Glock. Two of the bullets hit the Whitwells — Mark was shot in the abdomen and his brother in the buttocks.

Why The Charges Against Tupac Were Dropped

Police arrested Tupac a few hours later at his hotel and charged him with two counts of aggravated assault. Treated for their wounds, the Whitwells were released from Grady Hospital the following morning when Shakur pleaded not guilty and was released on a $55,059 bond. 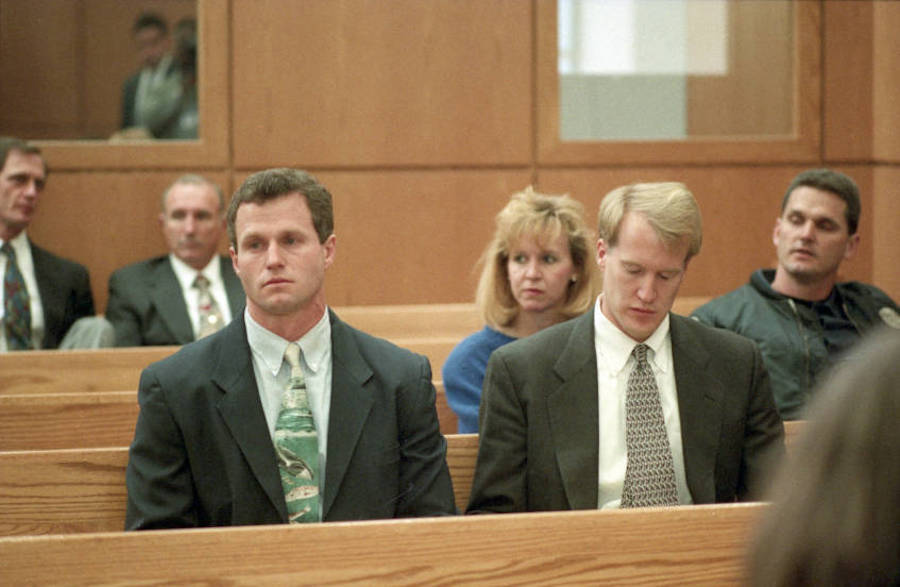 The fact that the two officers were intoxicated at the time of the shooting was uncovered at a hearing on Dec. 1, 1993, which aimed to determine whether or not the case would see a grand jury. Investigators had also discovered that both officers had been carrying guns stolen from a Henry County police evidence locker, which Scott Whitwell admitted to.

Most notably, the brothers had lied about who was the aggressor, which the prosecution discovered after a preponderance of evidence showed that Tupac had stopped as a good samaritan and fired his gun in self-defense, dropping the charges against him.

Mark Whitwell was charged with providing false statements to investigators and firing at Shakur’s car, likely coming from conflicting accounts of the window breaking. The district attorney later dropped the charges against him as well, and Mark Whitwell resigned six months later.

Ultimately, the incident had a longer lifespan than that. The Whitwells sued Shakur in civil court, with Mark Whitwell’s suit being settled out of court — and Scott Whitwell’s $2 million suit yielding a default judgment against Shakur’s estate in 1998, two years after Shakur was murdered in Las Vegas.

After learning about the Tupac 1993 police shootout, read about who killed Biggie Smalls. Then, learn about Assata Shakur, the first woman on the FBI’s Most Wanted list.