How 15-Year-Old Latasha Harlins’ Murder Over A Bottle Of Orange Juice Helped Spark The L.A. Riots

On March 16, 1991, Latasha Harlins went to a grocery store to buy a bottle of orange juice. Soon Ja Du, the store clerk, assumed she was stealing it and shot her in the back of the head.

On a Saturday morning in 1991, 15-year-old Latasha Harlins walked to a market five minutes from her home in South-Central Los Angeles to buy a bottle of orange juice.

Soon Ja Du – the market’s Korea-born owner — saw the orange juice sticking out of Harlins’ backpack and assumed she was stealing it, even though the teenager had cash in her hand.

After a short scuffle, Du grabbed a 0.38-caliber handgun and shot Harlins in the back of her head. She died instantly. 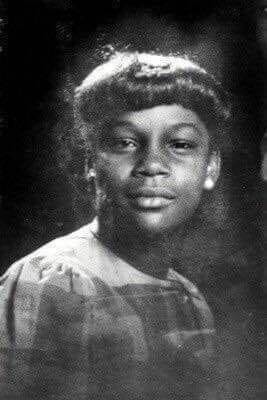 Latasha Harlins was killed just a few years after her mother was shot dead in a South-Central L.A. nightclub.

A year later, residents of Harlins’ neighborhood took to the streets in outrage. They called her name as they set fire to hundreds of Korean-owned businesses. L.A. would never be the same.

Latasha Harlins was born on July 14, 1975, in St. Louis, Illinois. When she was six years old, her family moved to South-Central L.A. by Greyhound bus.

“When you go someplace else, you’re always expecting things to be better,” said her grandmother, Ruth Harlins. “You always have dreams.”

But those dreams would soon be crushed. Only four years after the family settled into their L.A. apartment, Harlins’ mother, Crystal, was fatally shot in an L.A. nightclub. 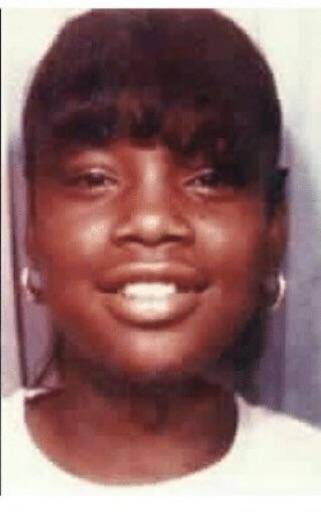 RedditThis may have been the last known photo taken of Latasha Harlins.

Latasha cried whenever she walked past a nearby cemetery. “I guess it made her think of her mom,” said her cousin, Shinese. “She’s not even buried there.”

Latasha’s grandmother was left in charge of her and her two siblings.

The neighborhood had its own host of problems during this time. Racial tensions were high, especially between local Korean store-owners and their impoverished black patrons.

Black customers were continuously frustrated by what they saw as rudeness and price-gouging on that part of Korean store clerks, as well as store owners’ refusal to hire any black employees.

Fueling the tension of the neighborhood was a never-ending onslaught of city-sponsored surveillance violence. Operation Hammer took off in 1987, an LAPD initiative that sent police officers into poor neighborhoods to conduct massive roundups of “suspected” gang members. From 1986 to 1990, 83 lawsuits against the LAPD for excessive force resulted in a settlement of at least $15,000.

Only two weeks before Latasha Harlins walked into Du’s Empire Liquor Market, a black man named Rodney King was pulled over by four LAPD officers, three of whom were white, for speeding. The officers shot him twice with Taser stun darts and then brutally beat him with batons before handcuffing him. He suffered massive injuries, including several skull fractures, broken bones and teeth, and permanent brain damage.

A video of the incident was given to a local TV station and ignited international outrage.

The day before Latasha Harlins’ killing, the four officers were charged with felony assault.

The Senseless Murder Of Latasha Harlins

Latasha Harlins was warned by her grandmother not to enter Empire Liquor unless she was planning on making a purchase. Everyone knew about the disrespect shown to black customers by the Korean owners, and they tried to avoid it as much as possible.

On the morning of March 16, 1991, though, Harlins did plan to make a purchase. She made the short walk to the market and picked up a $1.79 bottle of orange. After putting it into her backpack, where it jutted out from the top, she made her way to the counter.

According to a young witness named Ismail Ali, who was in the store with his older sister at the time, the middle-aged Soon Ja Du saw the girl and immediately yelled, “You bitch, you are trying to steal my orange juice.”

Harlins responded by lifting up her hand, which contained two dollar bills, and explained that she intended to pay. Du, however, grabbed the girl by the sweater, and the two began to fight.

Harlins repeated, “Let me go, let me go,” but the woman wouldn’t release her grip. In order to break free, the 15-year-old girl struck Du in the face four times, knocking her down. She picked the juice up from the floor, where it had fallen, placed it on the counter, and walked away.

“She was trying to walk out the door,” said Lakeshia Combs, Ali’s sister and another witness.

As the Harlins’ back was turned, Du reached for her gun and aimed it at the back of her head. She pulled the trigger and Harlins hit the floor.

No Justice For Latasha Harlins 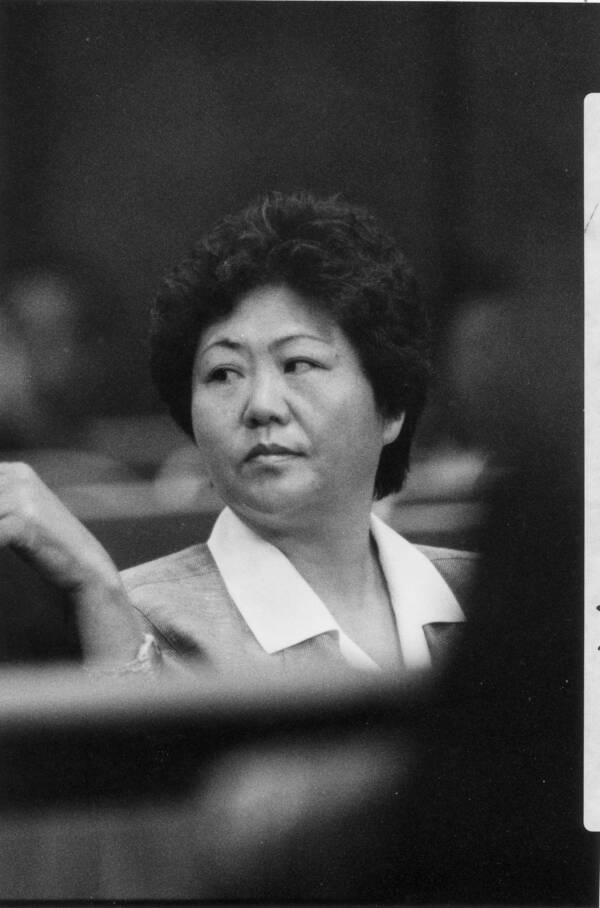 Los Angeles Times/GettyKorean grocer Soon Ja Du in court, after she fatally shot Latasha Harlins in the back of the head.

The reaction to Harlins’ killing was quick and bitter. Black residents protested outside of the Empire Liquor Market, and Soon Ja Du was taken into custody.

In the L.A. courtroom during the trial months later, the Harlins family sat in the front row, praying for justice. A security camera tape showed the entire heart-wrenching event on fuzzy, silent film.

“This is not television. This is not the movies,” said Deputy District Attorney Roxane Carvajal before showing the tape in court. “This is real life. You will see Latasha being killed. She will die in front of your eyes.”

“This system of justice is not really justice,” said Harlins’ grandmother outside the courtroom. “They murdered my granddaughter!”

Then Came The L.A. Riots

The community simmered in anger. That is, until April of 1992, when the verdict came down for Rodney King’s assaulters.

After the four police officers that senselessly beat Rodney King that night in 1991 were exonerated by a mostly white jury, the people of South Central finally had enough. The streets erupted in protests and riots, fire and gunshots.

For five days, Los Angeles burned and the LAPD left much of the city to fend for itself. Residents shouted Latasha Harlins’ name as they torched Korean-owned businesses — including Soon Ja Du’s own Empire Liquor.

Finally, 2,000 troops from the California National Guard were called in, and the 1992 riots came to an end. More than 50 people died and more than 2,000 were injured. The city was left with $1 billion in damages. 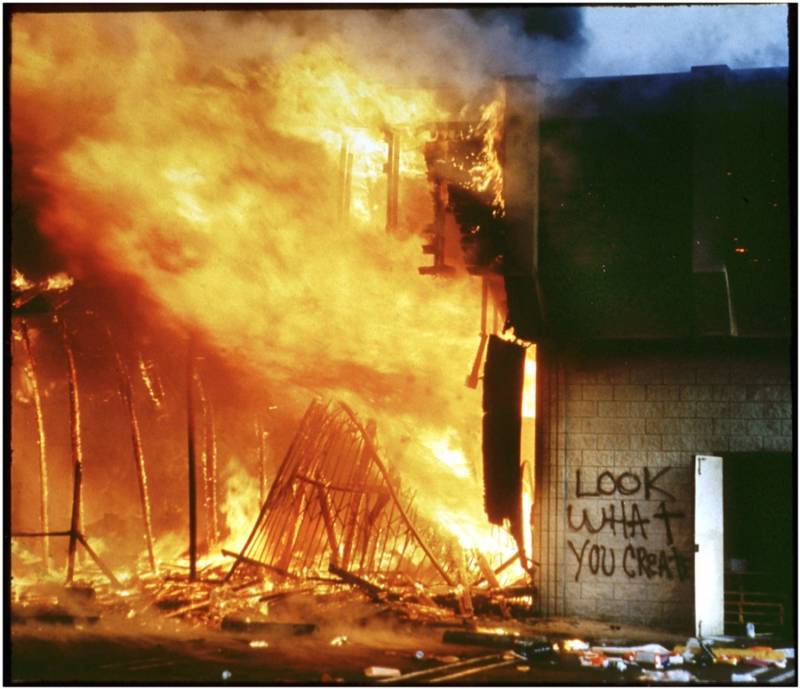 Kirk McKoy/Los Angeles Times/Getty ImagesProtesters leave a message that says “LOOK WHAT YOU CREATE” on day two of the L.A. Riots. By this time, a city-wide curfew had been enforced.

After these riots, a federal trial saw two of the LAPD officers who beat Rodney King finally serve time for their crimes, although they only ended up serving 30 months in prison. Latasha Harlins, however, saw no such justice.

In the years following Harlins’ killing, rapper Tupac Shakur provided her with a little hint of justice by ensuring that her name would never be completely forgotten.

He dedicated his track, “Keep Ya Head Up,” to the 15-year-old girl, and put her name in many of his other songs. On “Something 2 Die 4,” he sings, “Latasha Harlins, remember that name, ‘Cause a bottle of juice ain’t something 2 die 4.”

Tupac dedicated his song, ‘Keep Ya Head Up,’ to Latasha Harlins.

Now that you about the tragic and senseless murder of Latasha Harlins, check out these 20 moving Civil Right protest photos. Then read about Mickey Cohen, one of Los Angeles’ most notorious gang leaders.