El Papa Francesco turns 79 years old today. From calling on the world to combat climate change to his professional past as a janitor, chef and club bouncer, the current head of the Catholic Church challenges popular conceptions of the papacy, wooing diverse audiences from around the world. On his birthday, we look back through some of the most surprising Pope Francis quotes to date: 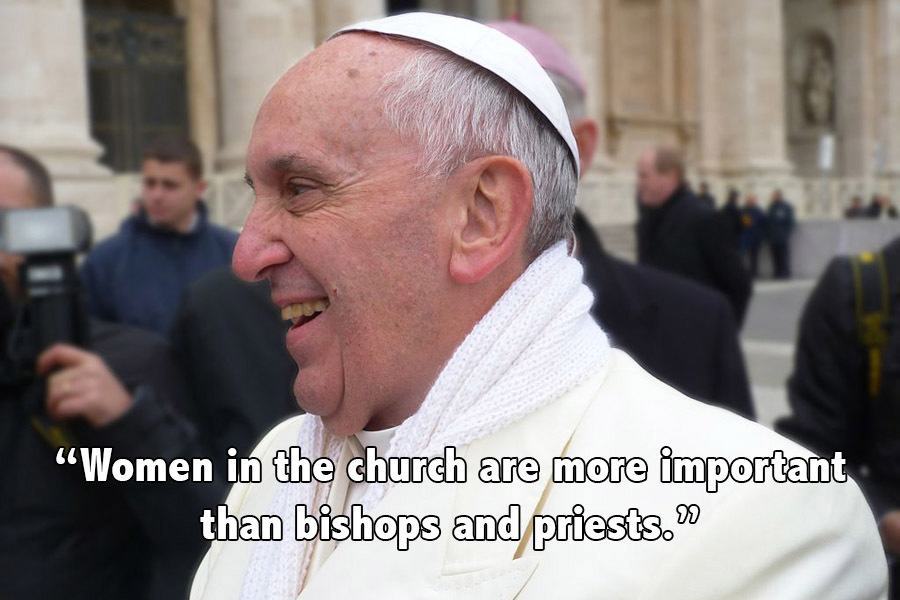 Women in the church are more important than bishops and priests.Gabriel Sozzi/Wikimedia Commons 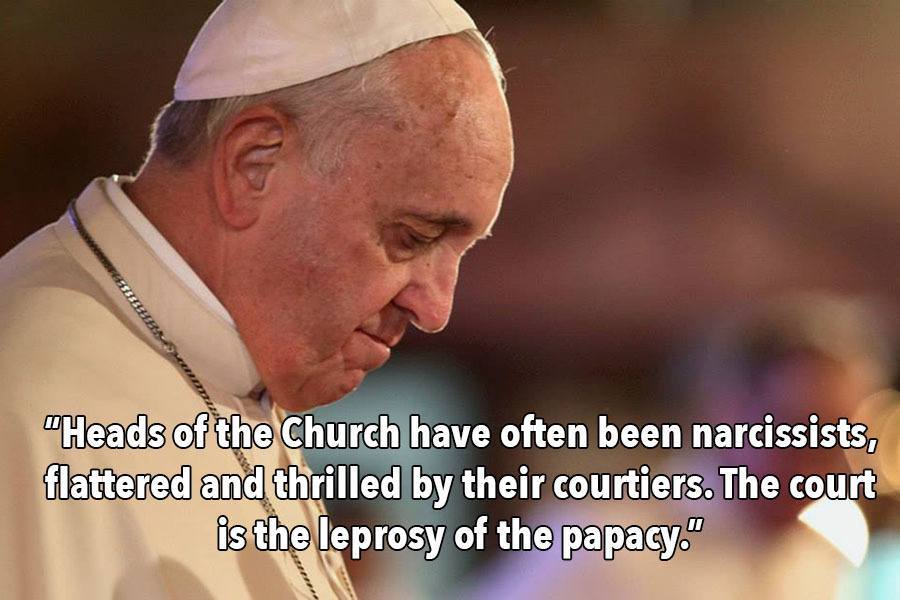 Heads of the Church have often been narcissists, flattered and thrilled by their courtiers. The court is the leprosy of the papacy.Flickr 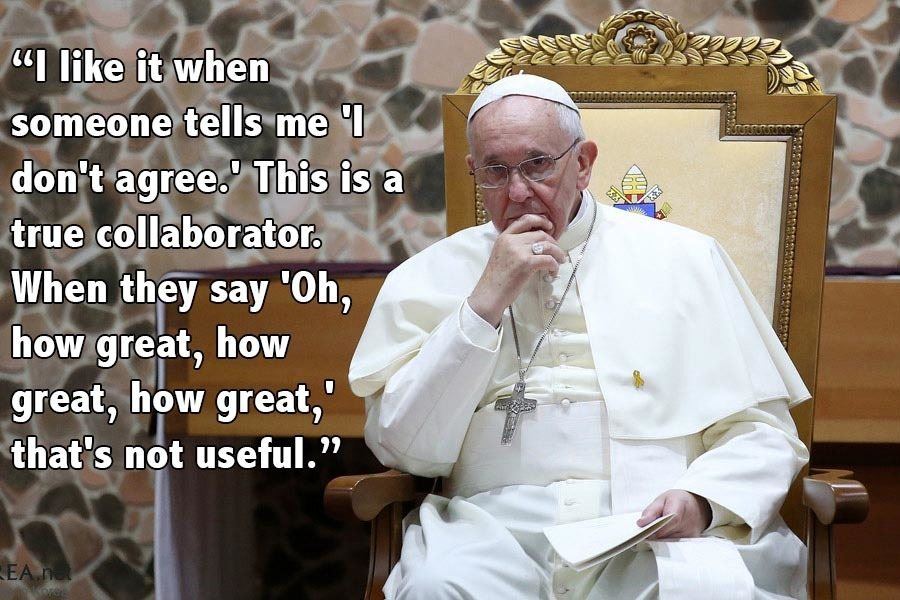 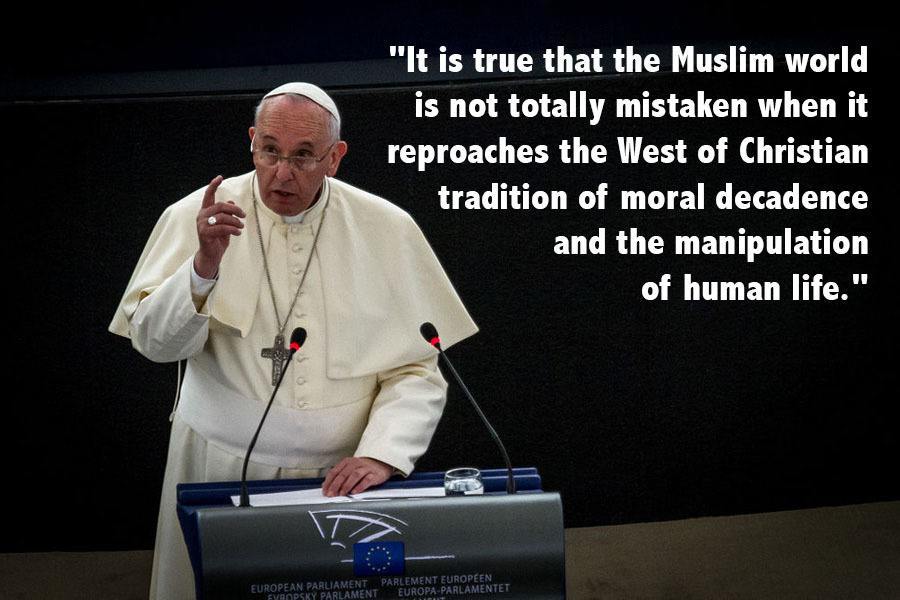 It is true that the Muslim world is not totally mistaken when it reproaches the West of Christian tradition of moral decadence and the manipulation of human life.Claude Truong-Ngoc/Wikimedia Commons 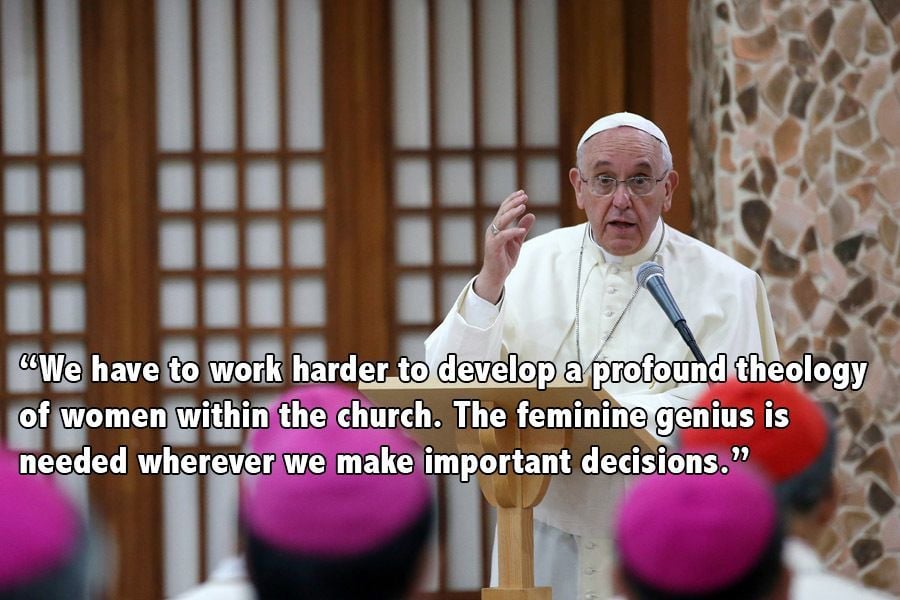 We have to work harder to develop a profound theology of women within the church. The feminine genius is needed wherever we make important decisions.Jeon Han/Creative Commons 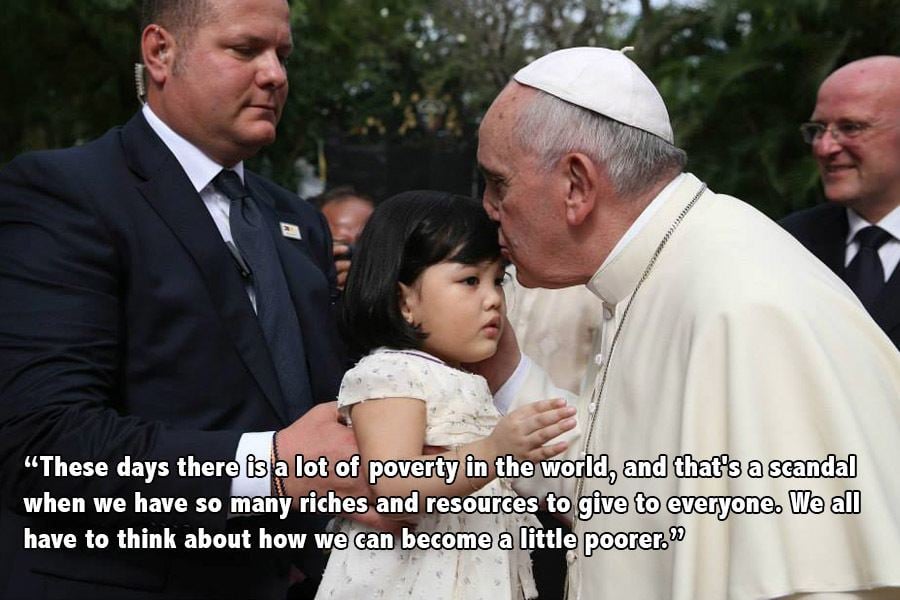 These days there is a lot of poverty in the world, and that's a scandal when we have so many riches and resources to give to everyone. We all have to think about how we can become a little poorer.Wikimedia Commons 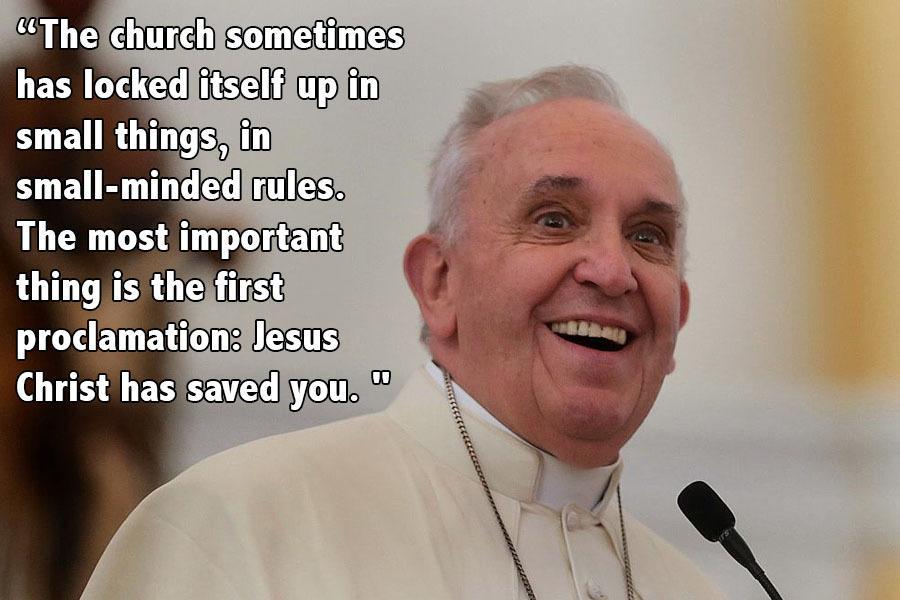 The church sometimes has locked itself up in small things, in small-minded rules. The most important thing is the first proclamation: Jesus Christ has saved you.Wikimedia Commons 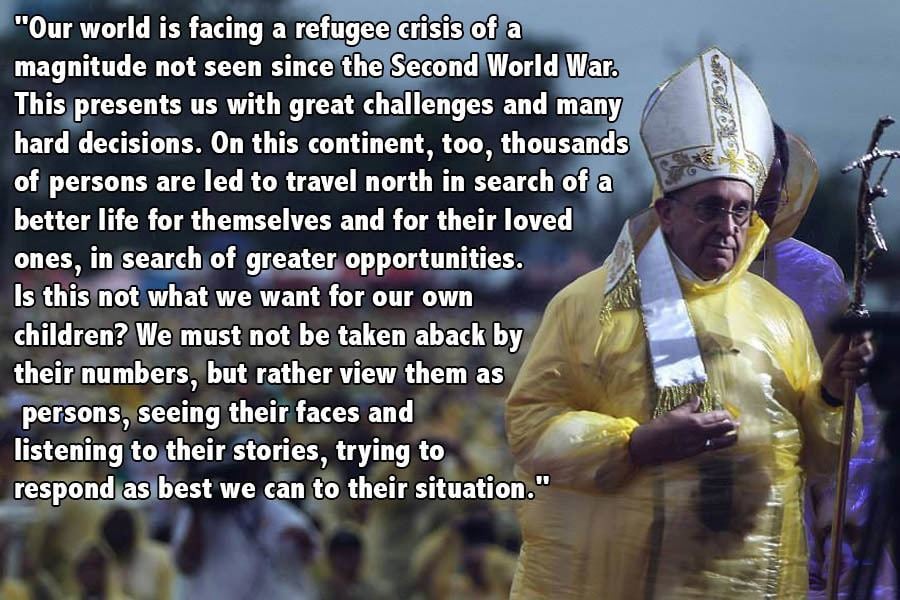 Our world is facing a refugee crisis of a magnitude not seen since the Second World War. This presents us with great challenges and many hard decisions. On this continent, too, thousands of persons are led to travel north in search of a better life for themselves and for their loves ones, in search of greater opportunities. Is this not what we want for our own children? We must not be taken aback by their numbers, but rather view them as persons, seeing their faces and listening to their stories, trying to respond as best we can to their situation.Wikimedia Commons 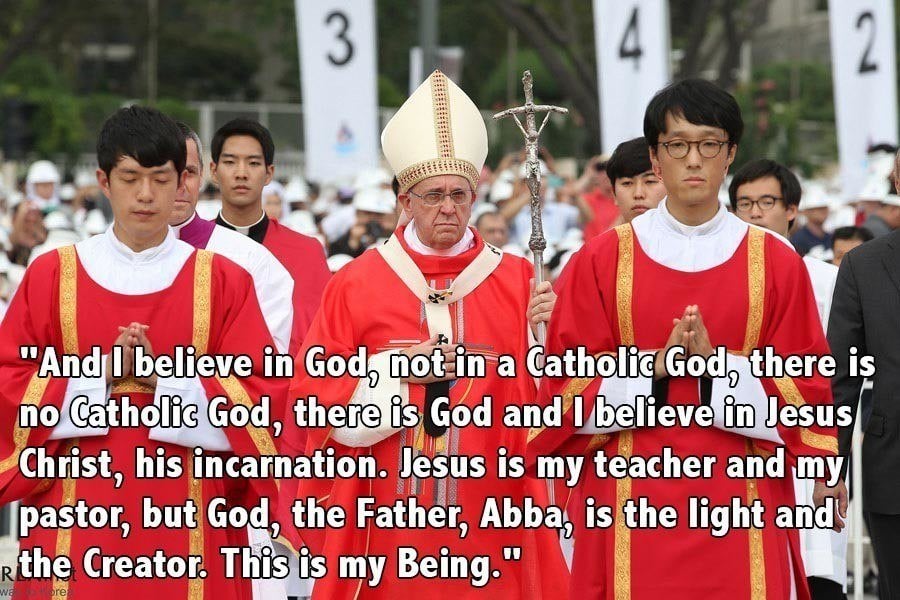 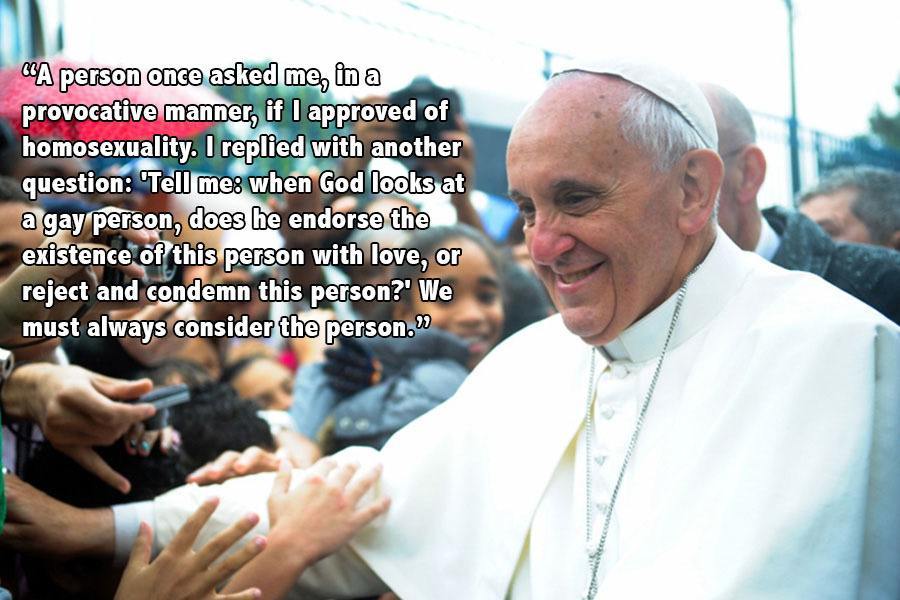 A person once asked me, in a provocative manner, if I approved of homosexuality. I replied with another question: 'Tell me: when God looks at a gay person, does he endorse the existence of this person with love, or reject and condemn this person? We must always consider the person.Tnia Rigo/Creative Commons 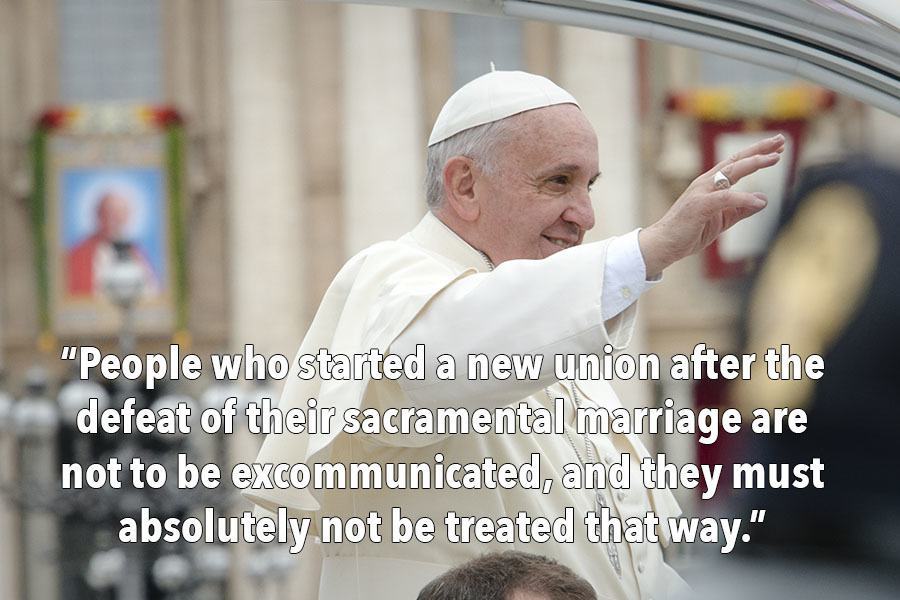 People who started a new union after the defeat of their sacramental marriage are not to be excommunicated, and they must absolutely not be treated that way.Flickr 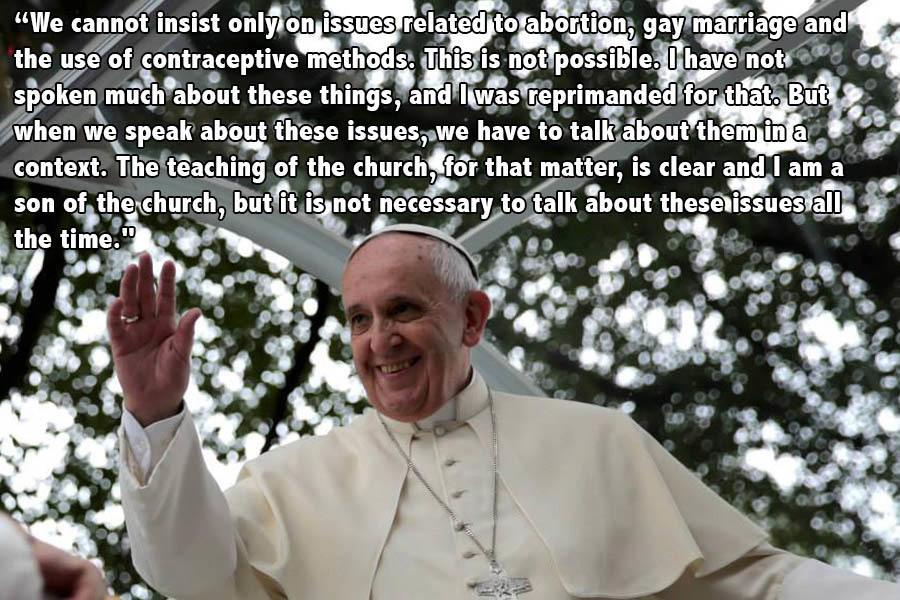 We cannot insist only on issues related to abortion, gay marriage, and the use of contraceptive methods. This is not possible. I have not spoken much about these things, and I was reprimanded for that. But when we speak about these issues, we have to talk about them in a context. The teaching of the church, for that matter, is clear and I am a son of a church, but it is not necessary to talk about these issues all the time.Wikimedia Commons 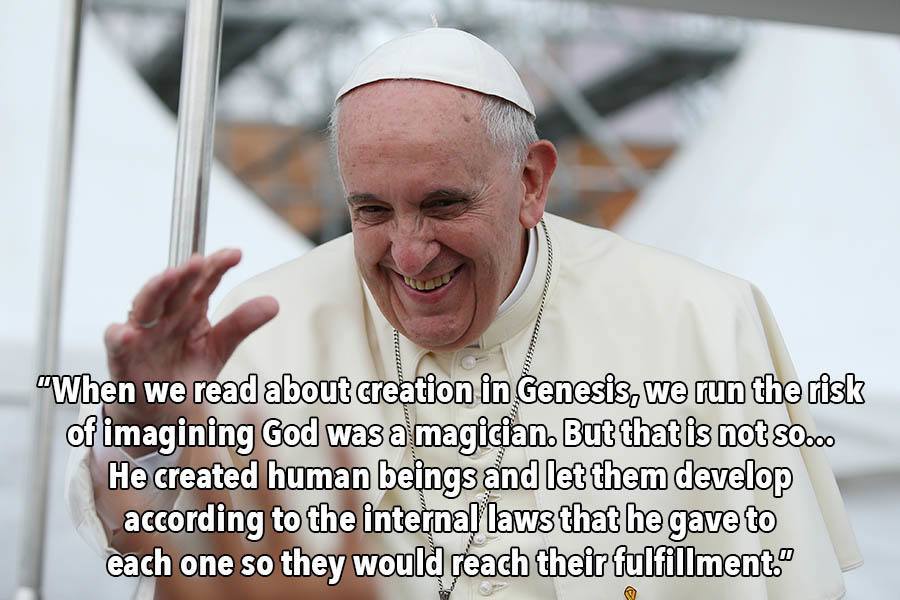 When we read about creation in Genesis, we run the risk of imagining God was a magician. But that is not so... He created human beings and let them develop according to the internal laws that he gave to each one so they would reach their fulfillment.Wikimedia Commons 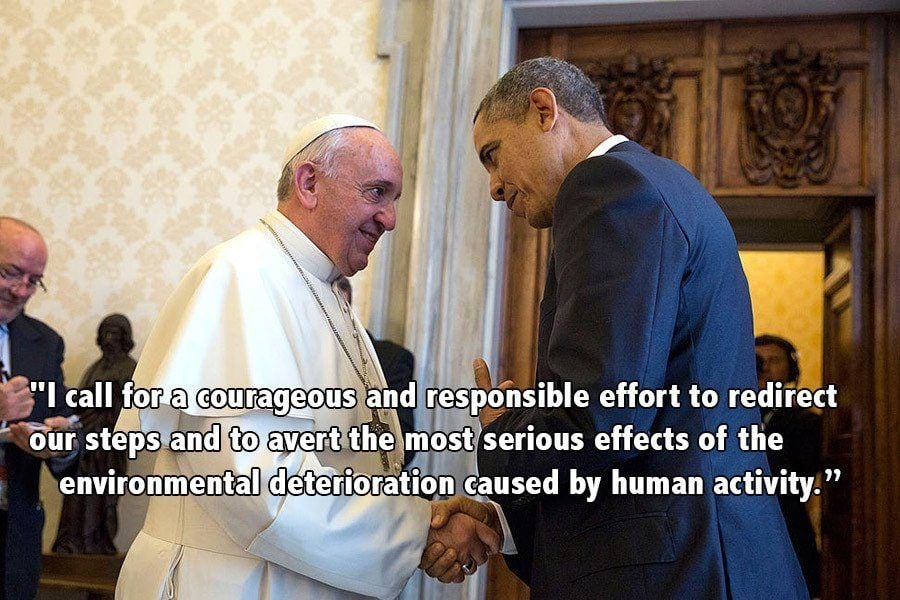 I call for a courageous and responsible effort to redirect our steps and to avert the most serious effects of the environmental deterioration caused by human activity.Pete Souza/Wikimedia Commons 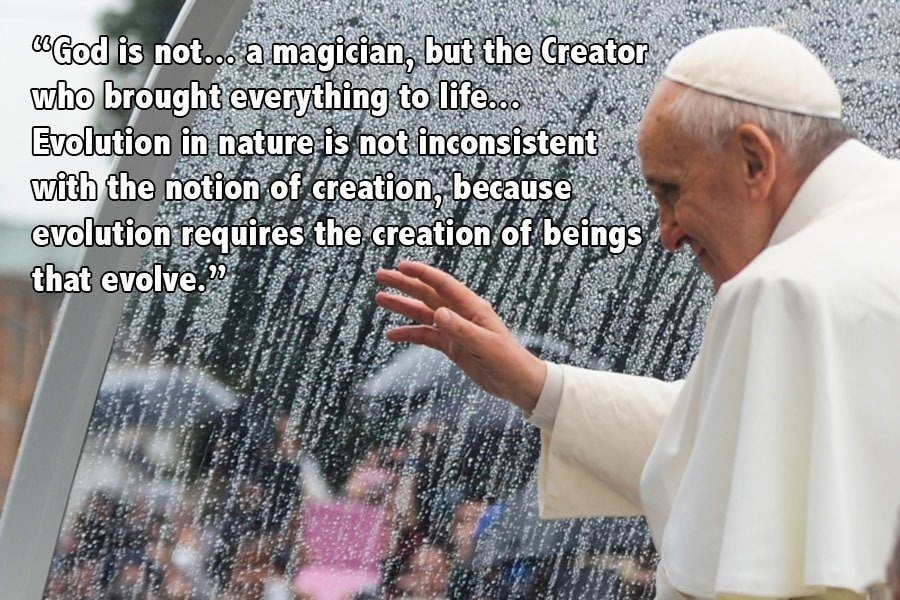 God is not... a magician, but the Creator who brought everything to life... Evolution in nature is not inconsistent with the notion of creation, because evolution requires the creation of beings that evolve.Tnia Rigo/Creative Commons 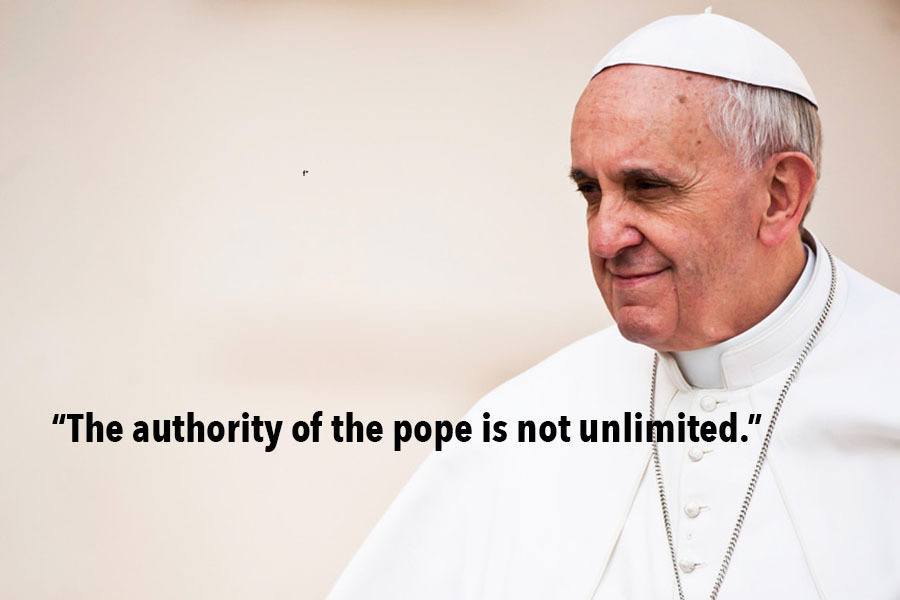 The authority of the pope is not unlimited.Wikimedia Commons 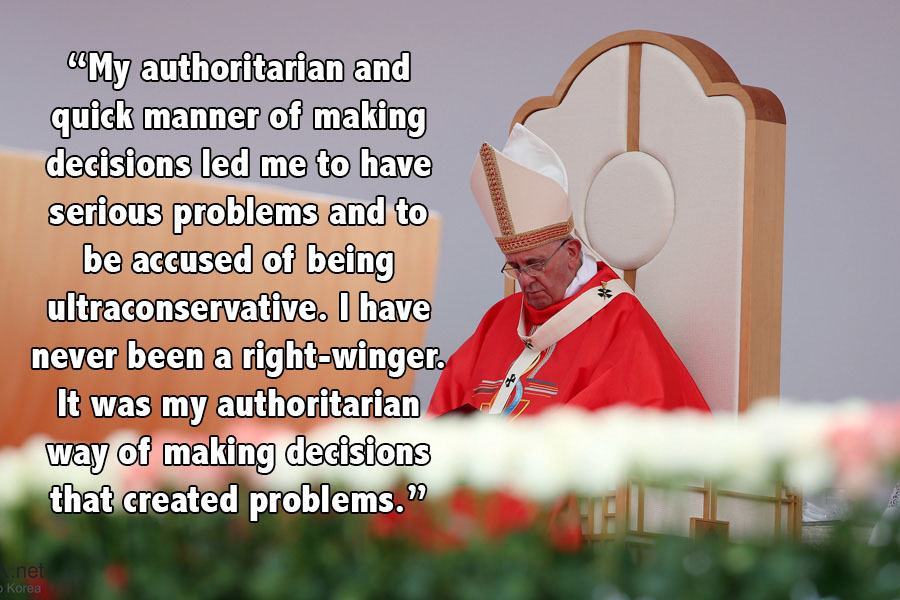 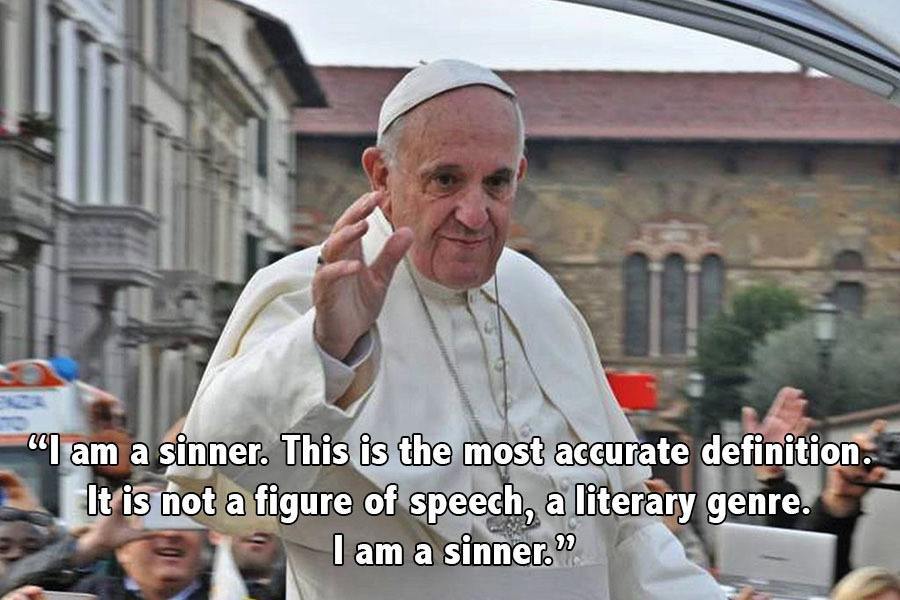 I am a sinner. That is the most accurate definition. It is not a figure of speech, a literary genre. I am a sinner.Creative Commons 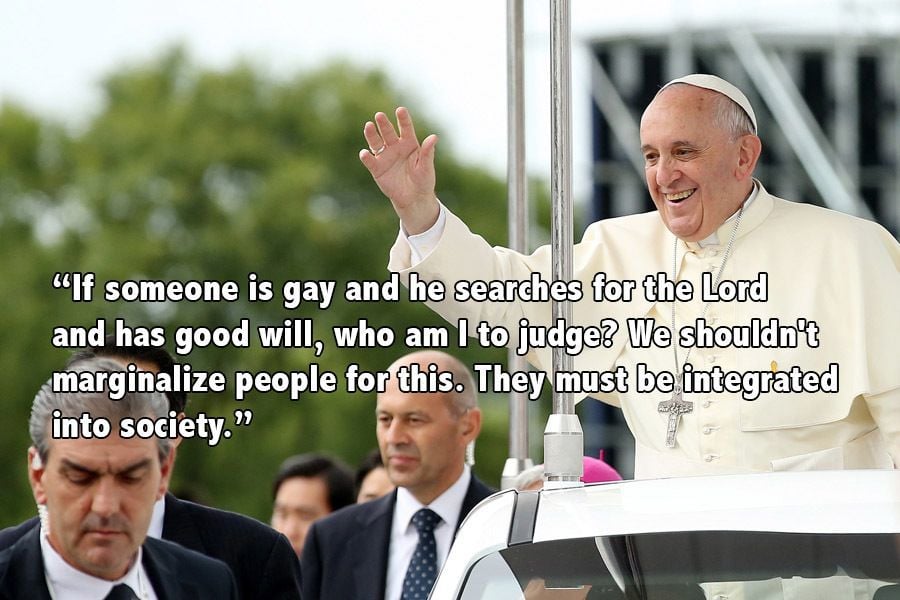 If someone is gay and he searches for the Lord and has good will, who am I to judge? We shouldn't marginalize people for this. They must be integrated into society.Jeon Han/Creative Commons 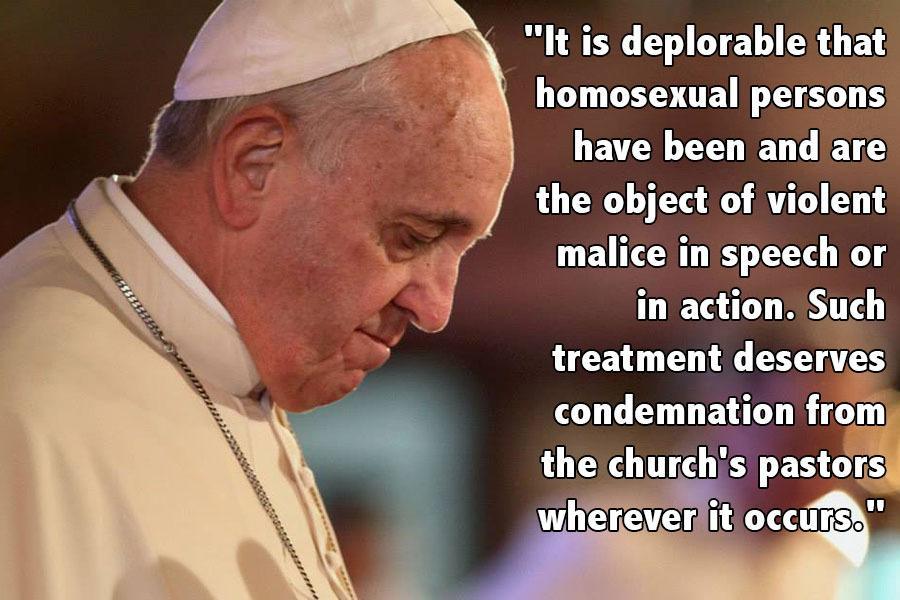 It is deplorable that homosexual persons have been and are the object of violent malice in speech or in action. Such treatment deserves the condemnation from the church's pastors wherever it occurs.Wikimedia Commons

Enjoy these interesting Pope Francis quotes? Check out our other posts on interesting quotes and inspirational quotes guaranteed to change your life!