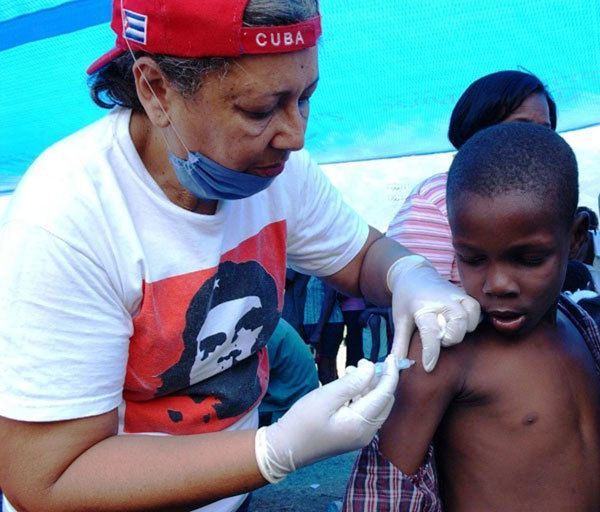 A child receives aid from a Cuban caregiver. Source: thecubaneconomy.com

Given Cuba’s advances in medical innovation and international philanthropy, some have said that Cuba is “shaming American medicine”, but it is not at all that simple.

Sure, one’s stay in a Cuban resort-style physical therapy clinic only costs $200 USD a day, but the average monthly income for a Cuban is still only about $22 USD. Sure, Cuba is famous for sending its well-trained, fairly-priced doctors all over the world, but when Cuba pulls in about $8 billion USD in return for offering medical aid abroad while only paying doctors about $67 USD per day for this work, something is awry.

America And Cuba: Not So Different After All

In the American healthcare system, millions of dollars are lost in the shuffle, whether it disappears in flashy awareness campaigns, fundraising, advertising, insurance, or just plain overtreatment of patients (the Latin word “placebo” translates to “I will please”, after all). American medicine is just as much about covering the doctor and the insurance company from any liability or complaint as it is about “healing.”

Cuban healthcare places much more emphasis on the doctor’s responsibility to his or her individual patients, but the main problem with American and Cuban medicine is the same–a misappropriation of funding.

Cuba sends its best and brightest to make money abroad while the citizens of Cuba suffer in poorly-lit corridors with junior doctors offering the cheapest and most limited resources they can afford to spare, saving the good stuff for the people who can pay top dollar for it.

Inside one of the ‘best’ hospitals in Cuba, the conditions are abysmal, with most of the facility in a filthy state of disrepair.

In other words, Cuba’s spirit of “medical internationalism” often means that the people who suffer most are Cuban healthcare workers and Cubans themselves. The country’s most profitable exports are doctors, because sending medical aid leads to stipends, subsidies, and diplomatic leverage with other, richer countries.

In its most recent ranking of world health systems, the World Health Organization ranks Cuba at 39th–two spots behind the United States.