The True Story Of Danny Rolling, The Gainesville Ripper Who Inspired ‘Scream’

Over the course of four days, serial killer Danny Rolling terrorized the college students of Gainesville, Florida in a murderous rampage.

Danny Rolling lived an unhappy life. A tortured soul since birth, Rolling, a.k.a the Gainesville Ripper, passed on the horrifying abuse he had endured onto his victims.

Over the course of four days in 1990, Rolling went on a rampage where he murdered five University of Florida students in a spree that terrified the nation. 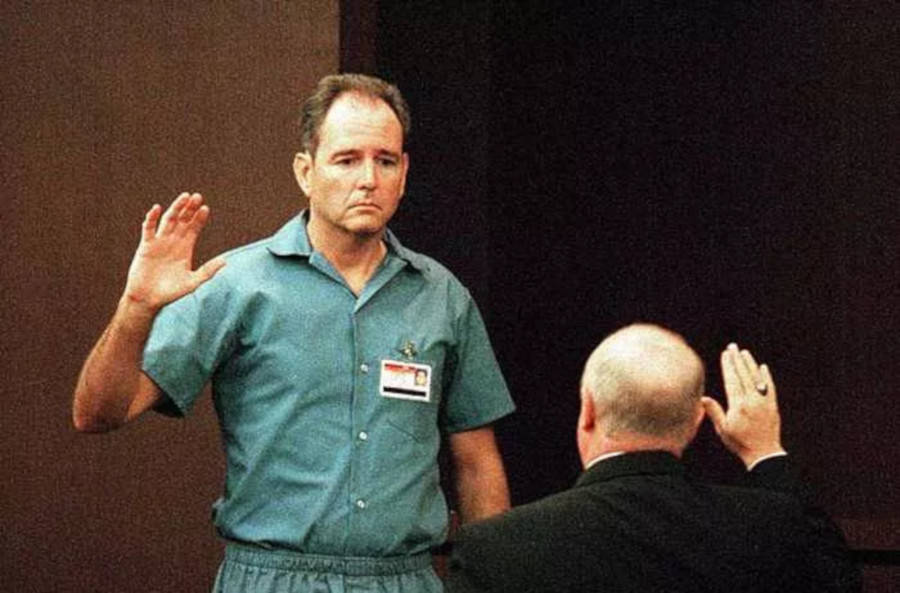 Public record via Jacksonville.comDanny Rolling a.k.a. “The Gainesville Ripper” on trial for murder.

But despite huge media coverage, Danny Rolling was never actually caught for the murders. It was only when he was arrested for an unrelated burglary charge that he confessed to some of the most horrific murders in Florida’s history and was unmasked as the Gainesville Ripper. Then, a few short years later, the Gainesville murders became even more infamous when they helped inspire the classic horror movie Scream.

This is the grisly true story of Danny Rolling, the Gainesville Ripper.

Danny Harold Rolling was born on May 26, 1954 to Claudia and James Rolling in Shreveport, Louisiana. Unfortunately for Danny, his father never wanted children. He was a cop and he consistently abused his wife and children.

Danny was only one-year-old when his father abused him for the first time. He was beaten because he wasn’t crawling properly. When Kevin, Danny’s younger brother, was born in 1955, the abuse only worsened.

Claudia tried to escape the toxic marriage, but time and again she returned. When Danny failed the third grade for too many absences due to illness, his mother had a nervous breakdown. Danny’s school counselors described him as “suffering from an inferiority complex, with aggressive tendencies and poor impulse control.”

Those aggressive tendencies and poor impulse control would foreshadow Danny’s murderous rage later in his life.

By age 11, Danny Rolling picked up music to cope with his abusive father. He played guitar and sang hymn-like songs. About this time his mother was committed to a hospital after she had slit her wrists. Danny then picked up drugs and alcohol which only worsened his already-fragile mental state.

At age 14, Danny’s neighbors caught him peeping into their daughter’s room. Of course, his father beat him for doing that. But Danny tried to stay in control and he attended church and struggled to hold down steady work. He then enlisted.

The Navy wouldn’t take him so he joined the Air Force, but the military provided him no comfort. He eventually quit the Air Force after too much drug use which included taking acid more than 100 times. Following his discharge from the military, Danny managed to marry and begin what appeared to be a normal life.

Then the cycle of abuse continued. At age 23, after being with his wife for four years, she separated from him after he threatened to kill her. This was in 1977. Danny turned his devastation into anger and raped a woman who closely resembled his ex-wife. Later that year, he killed a woman in a car accident which troubled him further.

The Rise Of The Gainesville Ripper

At 6’2″, Danny Rolling was a massive, powerful man. From the late 1970s to 1990s, Rolling committed a series of petty crimes and thefts. He turned to a series of armed robberies to get cash, and subsequently was in and out of the criminal justice systems in Louisiana, Mississippi, Georgia, and Alabama.

He broke out of prison several times and was fired and quit jobs just as frequently. Meanwhile, the bodies of three victims were found in Shreveport: 24-year-old Julie Grissom, her father Tom Grissom, and her nephew, eight-year-old Sean, who were all killed around the time Danny lost his last job and returned home in vengeance.

Danny Rolling broke in May of 1990. He shot his 58-year-old father twice and nearly killed him. Though he survived, James Rolling had lost an eye and an ear.

Danny then changed his identity with papers he stole after breaking into someone’s house. He fled Shreveport and took a bus to Sarasota, Florida, to start a new life as Michael Kennedy Jr. in late July of 1990.

But running away to Florida didn’t cure Danny. It made him worse.

On Aug. 24, 1990, Danny broke into the home of Sonja Larson and Christina Powell, both incoming freshman at the University of Florida in Gainesville. Rolling followed them home, broke into their house, and simply overpowered them. Thus began the streak of the Gainesville Ripper. 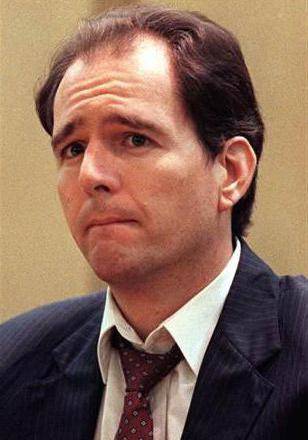 Rolling covered both of the young women’s mouths with duct tape before he bound their hands. He forced one young woman to perform oral sex on him before he raped, stabbed and killed her. He returned to Sonja’s dead body and raped her again. Rolling went so far as to cut off the girl’s nipples and to keep one as a grisly trophy of his actions.

The next day, Rolling killed Christa Hoyt in much the same fashion. He broke into her residence and after he raped her, he removed her nipples and placed them beside her. Rolling cut off her head and sat her upright on the edge of her bed. The Gainesville Ripper put her head on a bookshelf.

By now, news of the murders had spread across the University. Authorities put out as much information as they could to try to catch the suspect, and students slept in groups and took every precaution they could think of. Despite this, the Gainesville Ripper killed one more time.

On Aug. 27, Rolling attacked Tracey Paules and Manuel Taboada, both 23. He killed Tobada while he slept. Then he killed Tracey. Authorities feel Rolling did not manage to mutilate these bodies because he may have been in danger of getting caught, or was otherwise interrupted.

These murders all occurred less than 2 miles from each other around the University of Florida.

The university consequently canceled classes for a week. Students brought baseball bats with them everywhere they went and no one went out alone during the day or night. Students triple-locked doors and some slept in shifts so someone was awake at all times. By the end of August, thousands of students left campus and around 700 never came back because they feared for their lives.

Danny Rolling’s father, who was a 20-year veteran cop of the Shreveport Police Department, had not only taught his son how to take abuse all of his life, but he also taught Danny how to cover his tracks.

Police couldn’t find enough evidence at crime scenes to implicate Danny Rolling. Instead of leaving the duct tape on his dead bodies, Danny disposed of it in dumpsters to get rid of any fingerprints. Danny also used cleaning solvents on the dead bodies to remove any traces of semen. Some of the female bodies were left in sexually suggestive positions, which offered authorities a clue into the killer’s method. 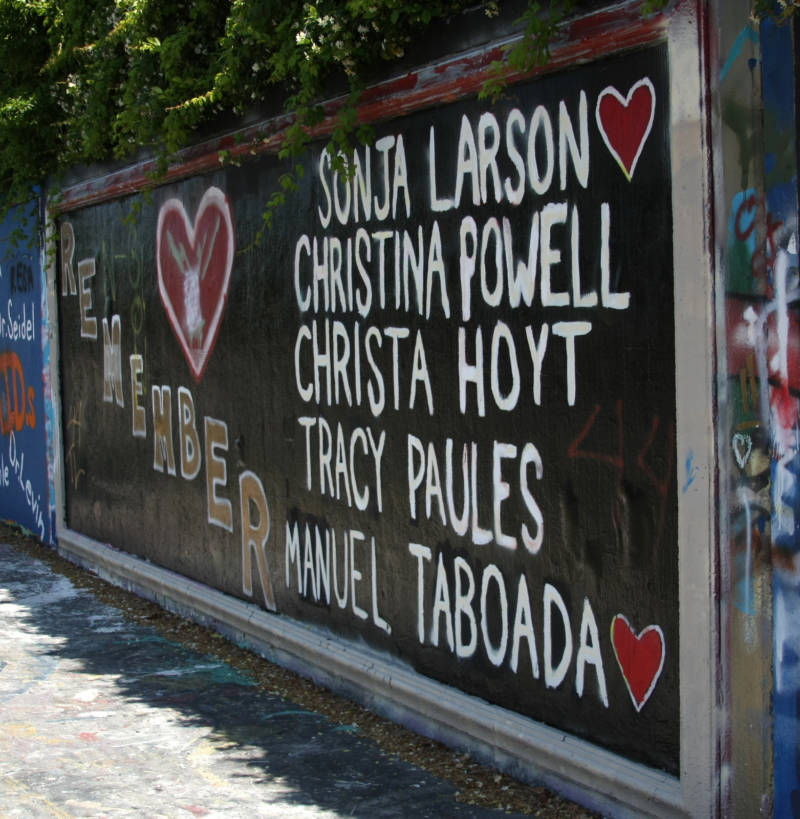 Wikimedia Commons A memorial on 34th Street in Gainesville, Florida, for Rolling’s victims.

The Gainesville Ripper continued to steal from homes and gas stations until he was finally caught in Ocala after a high-speed chase. He was wanted for the robbery of a Winn-Dixie as authorities still did not know that he was the Gainesville Ripper. That was on Sept. 8, two weeks after the murders.

The triple murder in Shreveport of Julie Grissom, her father, and nephew clued the Gainesville police into their suspect. Grissom’s corpse was left in a sexual position. She was also stabbed to death.

It wasn’t until January 1991, more than four months after the murders, that police caught a break. Because of the similarities of the murders in Shreveport and Gainesville, Florida investigators sought DNA of prisoners from Shreveport who were incarcerated. Danny Rolling’s DNA was similar enough to DNA left at the Gainesville murder scenes to charge him with murder.

Rolling confessed to being the Gainesville Ripper. Prosecutors found enough evidence to convict him and he was subsequently executed on October 25, 2006, in Florida.

A total of 47 people witnessed the execution of the Gainesville Ripper, which is double the capacity of the viewing room. Rolling’s last meal consisted of a lobster tail served with drawn butter, butterfly shrimp with cocktail sauce, a baked potato with sour cream and butter, strawberry cheesecake, and sweet tea.

On Rolling’s deathbed, the 52-year-old sang a hymn-type song that rambled on for five verses. He called on the tunes of his childhood when he learned how to play guitar to find peace before his execution.

But that’s not quite the end of the story.

Kevin Williamson was an aspiring writer in the 1990s when the Gainesville Ripper murders caught his attention. Williamson used the case to create a screenplay for a horror movie which revolved around the murders of college students and the media frenzy that ensued.

That screenplay turned into the 1996 cult-classic Scream. Although the Scream franchise follows high school students, Williamson got his chance to explore the fear rampant on university’s following a case like the Gainesville Ripper.

The success of Scream skyrocketed Williamson’s career. He’s now engaged in the Fox series The Following which taps into hysteria on a college campus.

“Back when I was researching Danny Rolling, I wanted to write about a serial killer on a college campus, and an FBI agent hunting down a college professor. But then I decided to do Scream.”

There are now memorials across the University of Florida campus, including five trees planted to honor the victims, and a mural urging students to never forget.

After this look at Gainesville Ripper Danny Rolling, read about Dorothea Puente, the Death House Landlady. Then check out this story on the media coverage of the original Jack the Ripper case in London.