The Monstrous Crimes Of The Dorothea Puente, The “Death House Landlady”

In 1980s California, Dorothea Puente's house was a den of theft and murder as this terrifying landlady killed at least nine of her unsuspecting tenants.

Dorothea Puente looked like a sweet grandmother — but looks can be deceiving. In fact, Puente was a serial killer who committed at least nine murders inside her boarding house in Sacramento, California throughout the 1980s.

Between 1982 and 1988, the elderly and disabled people living in Dorothea Puente’s house had no idea that was she was poisoning and strangling some of her guests before burying them on her property and cashing their Social Security checks. 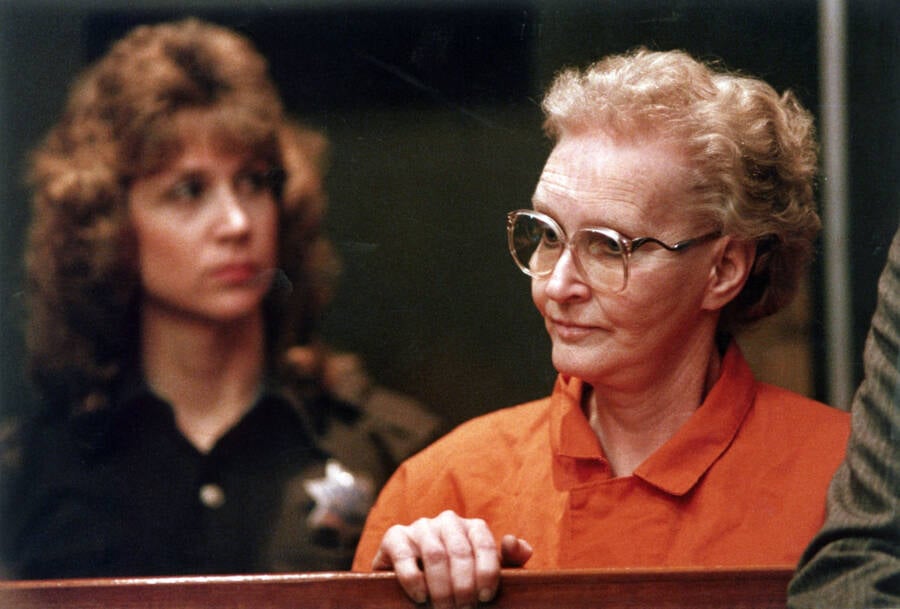 For years, the disappearances of these so-called “shadow people” — who lived at the margins of society — went unnoticed. But eventually, police searching for a missing tenant spotted a patch of disturbed dirt near the boarding house — and uncovered the first of several bodies.

This is the disturbing story of Dorothea Puente, the “Death House Landlady.”

Dorothea Puente’s Life Of Crime Before Becoming A Serial Killer 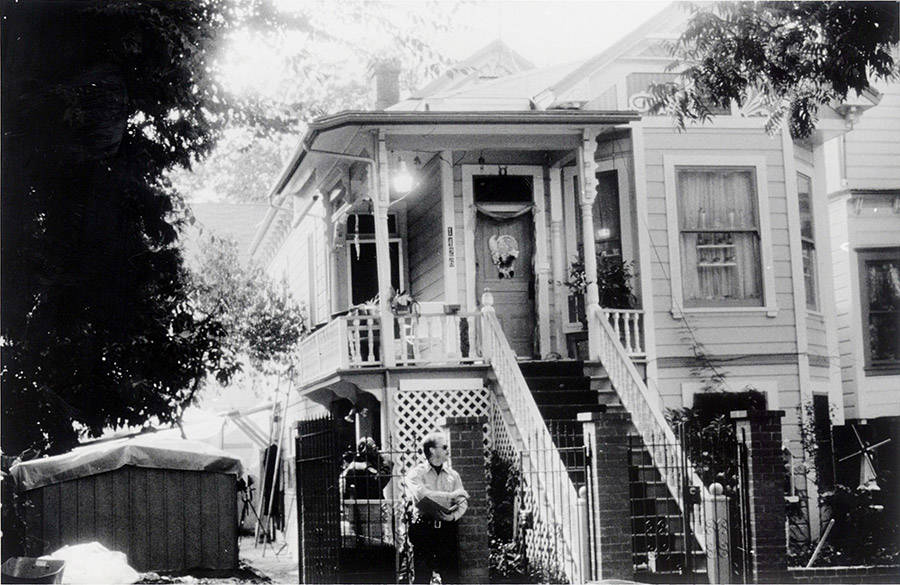 Dorothea Puente, née Dorothea Helen Gray, was born on January 9, 1929, in Redlands, California. She was the sixth of seven children — but didn’t grow up in a stable family environment. Her father died of tuberculosis when Puente was eight while her mother, an alcoholic, routinely abused her children and died in a motorcycle accident a year later.

Orphaned, Puente and her siblings splintered off in different directions, bouncing between foster care and relatives’ homes. Puente struck out on her own when she was 16. In Olympia, Washington, she tried to make a living as a prostitute.

Instead, Puente found a husband. She met and married Fred McFaul in 1945. But their marriage was brief — only three years — and hinted at trouble beneath the surface. Dorothea Puente had several children with McFaul but didn’t raise them. She sent one child to live with relatives while another was put up for adoption. By 1948, McFaul asked for a divorce and Puente drifted south to California.

There, the former prostitute turned back to a life of crime. She got in serious trouble for the first time in her life after bouncing a check in San Bernadino and spent four months in jail. Puente was supposed to stick around to serve out her probation, but — in a sign of things to come — she skipped town instead.

Next, Dorothea Puente went to San Francisco, where she married her second husband, Axel Bren Johansson, in 1952. But volatility seemed to follow Puente wherever she went and the new couple argued frequently about Puente’s drinking and gambling. When Puente offered to perform a sex act on an undercover cop at a house of “ill-repute,” her husband sent her to a psychiatric ward.

Despite this, their marriage lasted until 1966.

Puente’s next two marriages would be short-lived. She married Roberto Puente in 1968, but the relationship dissolved sixteen months later. Puente then married Pedro Angel Montalvo, but he left her only a week after they were wed.

Despite all evidence to the contrary, Dorothea Puente believed herself to be an able caretaker. In the 1970s, she opened her first boarding house in Sacramento.

The Horrors That Unfolded Inside Dorothea Puente’s House 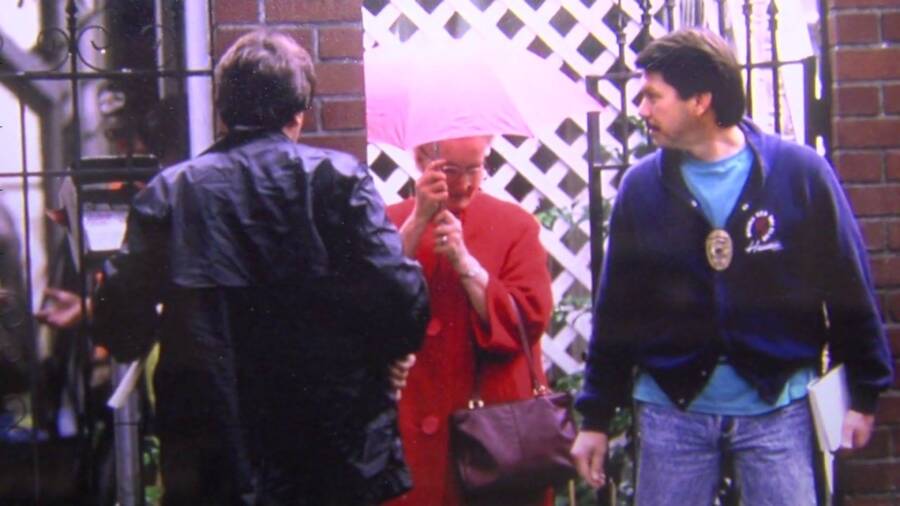 Social workers in the 1970s looked upon Dorothea Puente and her boarding house with admiration. Puente had a reputation for taking in people considered “tough cases” — recovering alcoholics, drug addicts, the mentally ill, and the elderly.

But, behind the scenes, Puente had embarked on a path that would lead her to murder. She lost her first boarding house after getting caught signing her own name to tenants’ benefit checks. In the 1980s, she worked as a personal caretaker — who drugged her clients and stole their valuables.

By 1982, Puente was sent to prison for her thefts. She was released just three years later, although a state psychologist diagnosed her as a schizophrenic with no “remorse or regret” who should be “closely monitored.”

Instead, Puente opened up her second boarding house.

There, she quickly got back to her old tricks. Puente took in so-called “shadow people” — people who were marginally homeless without close family or friends.

Some of them began to disappear. But no one noticed. Even probation officers who stopped by accepted Puente’s explanation that the people living at her house were guests or friends — not boarders.

In April of 1982, a 61-year-old woman named Ruth Monroe moved into Dorothea Puente’s house. Soon after, Monroe died from an overdose of codeine and acetaminophen.

When the police arrived, Puente told them that Monroe had been depressed due to her husband’s terminal illness. Satisfied, the authorities ruled Monroe’s death a suicide and moved on.

In November 1985, Dorothea Puente hired a handyman named Ismael Florez to install some wood paneling in her home. After Florez finished the job, Puente had one more request: to build her a six-foot-long box so she could fill it with books and a few other assorted items before the pair of them would bring the box to a storage facility.

But on the way to the storage facility, Puente abruptly asked Florez to pull over near a riverbank and just push the box into the water. On New Year’s Day, a fisherman spotted the box, noticed that it looked suspiciously like a coffin, and informed the police. Investigators soon found the decomposing body of an elderly man inside.

However, it would be three more years before authorities could identify the body as one of the tenants in Dorothea Puente’s house.

It wasn’t until 1988 that suspicions first arose about Puente, after one of her tenants, 52-year old Alvaro Montoya, went missing. Montoya struggled with mental health issues and had been homeless for years. He’d been referred to Dorothea Puente’s house because of her sterling reputation welcoming people like him.

Unlike many who passed through Puente’s boarding house, however, someone had their eye on Montoya. Judy Moise, an outreach counselor with Volunteers of America, became suspicious when Montoya vanished. And she didn’t buy Puente’s explanation that he’d left on vacation.

Moise alerted police, who went to the boarding house. They were met by Dorothea Puente, an elderly woman with big glasses, who repeated her story that Montoya was simply on vacation. Another tenant, John Sharp, backed her up.

But as the police prepared to leave, Sharp slipped them a message. “She’s making me lie for her.”

The police returned and searched the house. Finding nothing, they asked permission to dig up the yard. Puente told them that they were welcome to do so, and even provided an extra shovel. Then, she asked if it would be ok if she went to buy a coffee.

The police said yes, and started to dig.

The Trial And Imprisonment Of The “Death House Landlady” 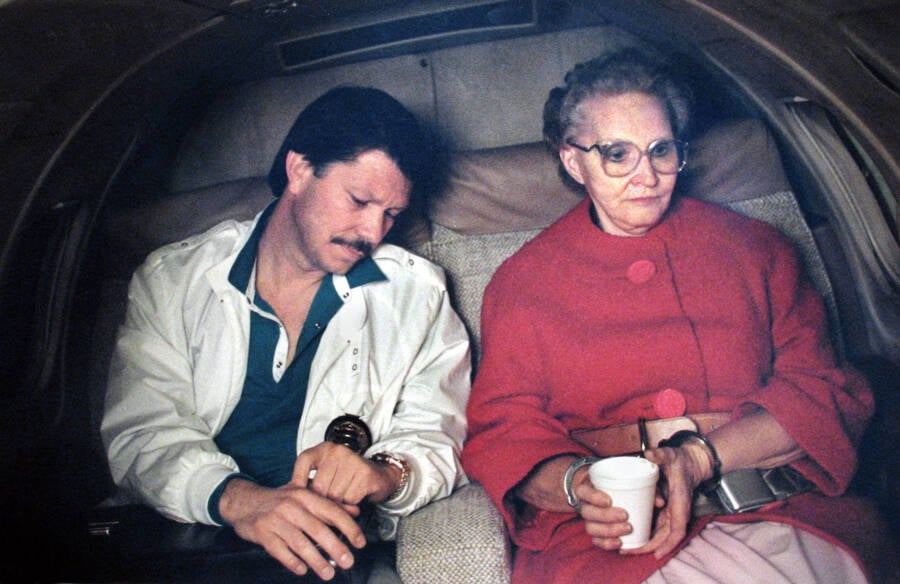 Dick Schmidt/Sacramento Bee/Tribune News Service via Getty ImagesDorothea Puente after her arrest in Los Angeles, en route back to Sacramento.

For five days, Dorothea Puente was on the lam. But police tracked her down in Los Angeles after a man in a bar recognized her from TV.

Charged with a total of nine murders, Puente was flown back to Sacramento. On her way back, she insisted to reporters that she hadn’t killed anyone, claiming: “I used to be a very good person at one time.”

Throughout the trial, Dorothea Puente was portrayed as either a sweet grandma-like type or a manipulative criminal who preyed on the weak. Her lawyers argued that she might be a thief, but not a murderer. Pathologists testified that they hadn’t been able to fix the cause of death for any of the corpses.

John O’Mara, the prosecutor, called over 130 witnesses to the stand. The prosecution stated that Puente used sleeping pills to drug her tenants, suffocated them, and then hired convicts to bury them in the yard. Dalmane, which is a drug used for insomnia, was found in all seven of the exhumed bodies.

Prosecutors said that Puente was one of the most “cold and calculating female killers the country had ever seen.”

In 1993, after several days of deliberations and a deadlocked jury (due in part to her grandmotherly disposition), Dorothea Puente was ultimately convicted of three murders and received back-to-back life sentences.

“These entities fall through the cracks,” said Kathleen Lammers, executive director of the California Law Center on Longterm Care, about boarding houses like Puente’s. “Not everybody running them is being nefarious, but nefarious activity can crop up.”

But to the end of her life, Dorothea Puente insisted that she was innocent — and that she had been taking good care of the people under her charge.

“The only time [the boarers] were in good health was when they stayed at my home,” Puente insisted from prison. “I made them change their clothes every day, take a bath every day and eat three meals a day… When they came to me, they were so sick, they weren’t expected to live.”

After learning about the murders inside Dorothea Puente’s house, read about the serial killer known as the “Angel of Death”. Then learn about Aileen Wuornos, history’s most terrifying female serial killer.