Inside The Darvaza Gas Crater, Turkmenistan’s Fiery Door To Hell

The Darvaza gas crater or the 'Door to Hell' has been burning for almost half a century, and the geologists monitoring it have no idea how long it will take to stop. 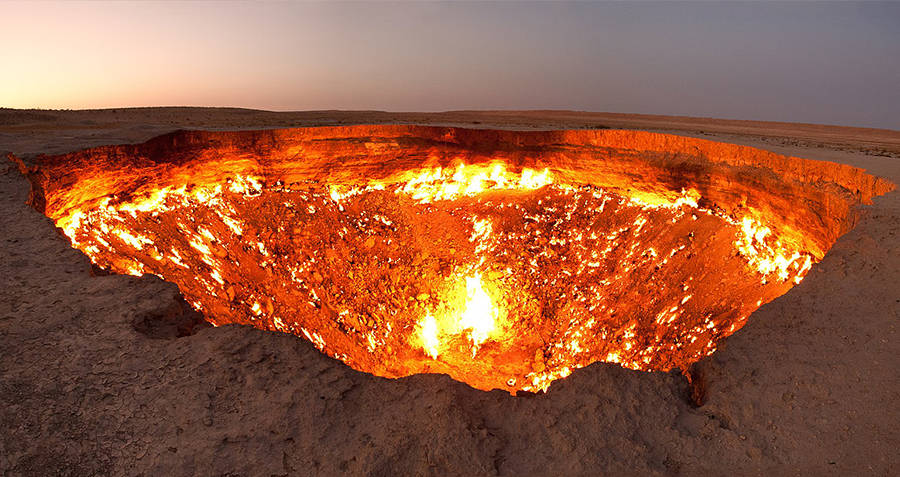 Deep in the heart of the Turkmenistan desert, there lies a 230-foot-wide hole in the earth, filled with flames. The seemingly bottomless hole opens up to the heavens, but unleashes the flames of hell, attracting hundreds of tourists each year, and earning its place on a long list of the earth’s eeriest places.

When the Darvaza gas crater, aptly named the “Door to Hell,” was first discovered, the area was being drilled for oil. Soviet geologists had claimed the area, the central Karakum Desert, for their own and believed it to be the site of massive amounts of oil. Little did they know that the area was actually home to a huge pocket of natural gas, above which had formed a thin crust of earth.

When the geologists began drilling into the Karakum ground, the thin crust that had formed over the gas pocket crumbled, unable to support the weight of the heavy machinery. The entire site collapsed, beginning a domino effect that resulted in craters opening across the thin desert plain.

As the crater collapsed, the geologists realized they had a problem. Not only had the Door to Hell swallowed their drilling equipment, but it was now leaking natural gas. Though the gas was mostly methane, which is non-toxic but can make it hard to breathe, the wildlife that roamed the Karakum Desert began to suffer. Before long, they began to die.

In addition to harming the animal life in the desert, the gas presented yet another problem. Methane gas has a high flammability, and just five percent methane in the air can cause an explosion. The high levels seeping from the open crater made the area highly susceptible to a major disaster.

So, the scientists decided to eliminate the natural gas in what they thought would be a quick and easy fix — setting the Door to Hell on fire. 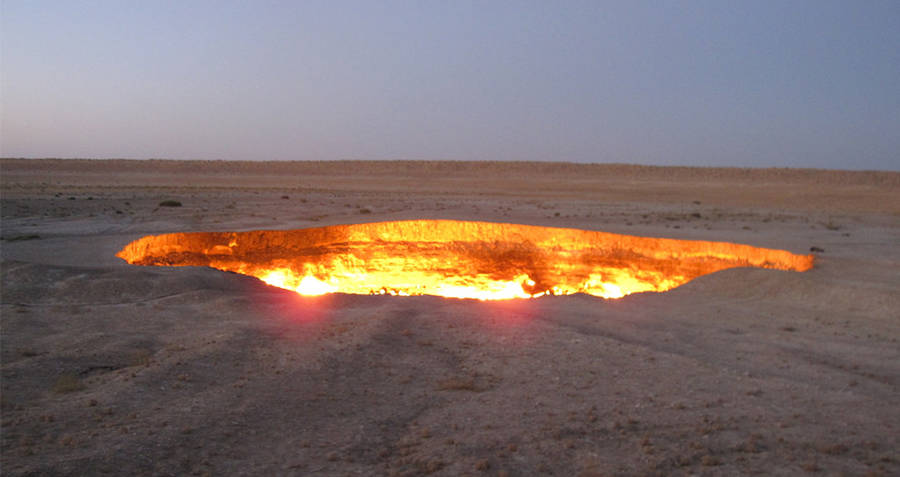 Wikimedia CommonsThe Door to Hell stands in stark contrast to the surrounding desert.

In many natural gas drills, the excess gas that can’t be captured is eliminated through a controlled burn. Known as “flaring,” the practice is used worldwide, most notably in North Dakota. So, it was pretty much business as usual when the scientists set up a flare and lit the Door to Hell on fire.

Unlike the controlled burns in other natural gas drilling areas, the geologists in the Karakum didn’t know how much gas they were dealing with. Thus, what should have been a few-week burn has become a decades-long one. And, it doesn’t look like its stopping any time soon.

In 2010, 40 years after the burn began, Turkmenistan’s president Kurbanguly Berdymukhamedov visited the Door to Hell, and ordered geologists and authorities to find a way to stop the burning. He worried that the eternal flames would make drilling other gas fields impossible. As Turkmenistan’s natural gas reserves rank fifth in the world, the prospect of drilling could mean major income for the country. However, a lack of international pipelines and a giant firey hole in the ground have hit pause on development efforts.

In the years since President Berdymukhamedov ordered it filled, no efforts to quell the flames have been made.

For now, the Door to Hell lies like a cavernous inferno, attracting hundreds of visitors, and luring in unsuspecting wildlife. Locals report seeing swarms of spiders launching themselves into the pit, dazzled by the flames, and unsuspecting of their fate.

Despite its ominous look and nickname, the Darvaza gas crater is actually quite a sight to behold. The contrast between the serene, clear desert skies and the fiery depths below it is surreal, making for breathtaking photos and a worthy day trip. That is if you happen to find yourself in the Karakum Desert of Turkmenistan with a few hours to spare.

Enjoy this look at the Darvaza gas crater? Next, check out Centralia, the town in Pennsylvania that’s been on fire for more than 50 years. Then, read about another archeological demonic entryway, dubbed the “Portal to Hell.”