Meet Darya Saltykova, The Russian Blood Countess Who Slaughtered 138 Of Her Serfs For Fun

It was said Darya Saltykova flayed her young servants, poured boiling water on them, and even trampled the belly of one who was pregnant. 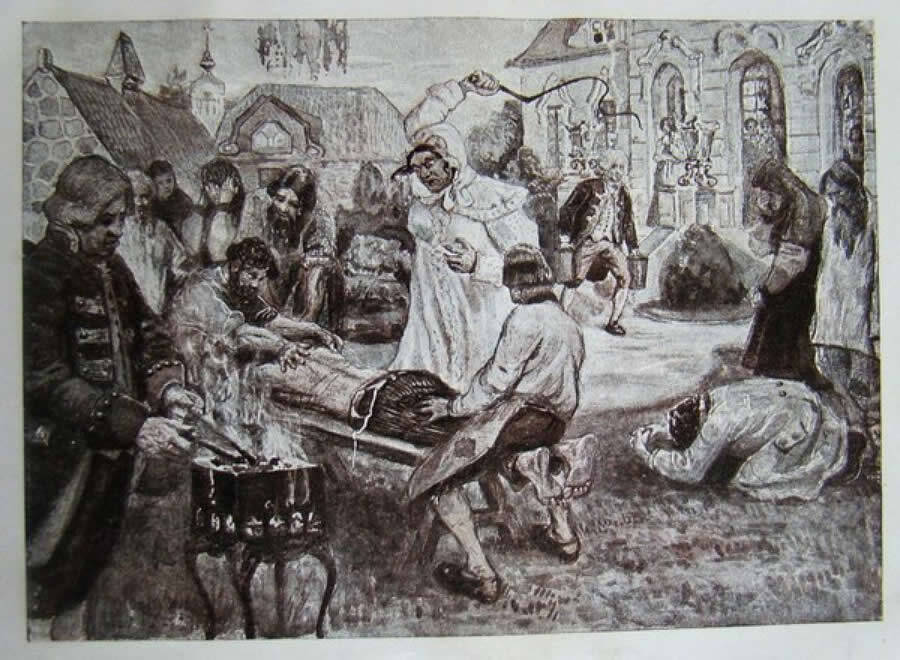 Odd things reportedly happened around Russian aristocrat Darya Saltykova’s estate. Like a spider’s web, girls would enter the widow’s employ and never return. Screams and the crack of whips were said to have pierced the Russian night, emanating from the so-called Blood Countess’ residence.

Though premature deaths among the serf class were not uncommon in 18th-century Russia, those in Saltychikha’s domain were always a little off.

Once, a priest was allegedly called to her estate to deliver the last rights to a pregnant woman on death’s door. The woman had been beaten and stabbed to death — some claimed her pregnant belly had been trampled.

Another rumor tells of a villager passing by the noblewoman’s estate and spying the corpse of a woman wheeled away in the dead of night. Her body was flayed and her hair removed.

Ultimately, the so-called Russian Blood Countess was eventually found guilty of having tortured and murdered some 38 of her serfs — though her total body count was allegedly closer to 138.

Making A Murderess Of Darya Saltykova

Whenever her blood-soaked career started, Saltykova wasn’t seen as a monster in her early days.

Born in 1730, Saltykova was said to be extremely pious as a young woman, visiting sacred shrines and hitting all the marks for a religious aristocrat. She married young to Gleb Saltykov, a captain in the imperial guard, whose family connections included philosophers, artists, politicians, money, land, and power.

He apparently died in 1755 when Saltykova was only 26, leaving the young widow with enormous tracts of land, prominence, and 600 serfs, which proved a powerfully corrupting cocktail for her.

Saltykova didn’t bathe in blood nor did she keep an attic of maimed slaves — at least, not one that we know of. Due to her position, separating fact from fiction in Saltykova’s tale of cruelty is no simple task, but she nonetheless belongs in the dubious circle of monstrous maidens of yore.

The Violence Of Russia’s Blood Countess

These victims belonged to the serf class, a uniquely Russian status somewhere between slave and indentured servant. These girls existed to serve their masters — or mistress, in this case — and had very little recourse against abuses. Opportunities for justice were few and far between in 18th-century Russia anyway.

Thus the noblewoman’s serfs had to deal with her insane bloodlust with their only countermeasure being calling her disrespectful diminutives behind her back, like Saltychikha. 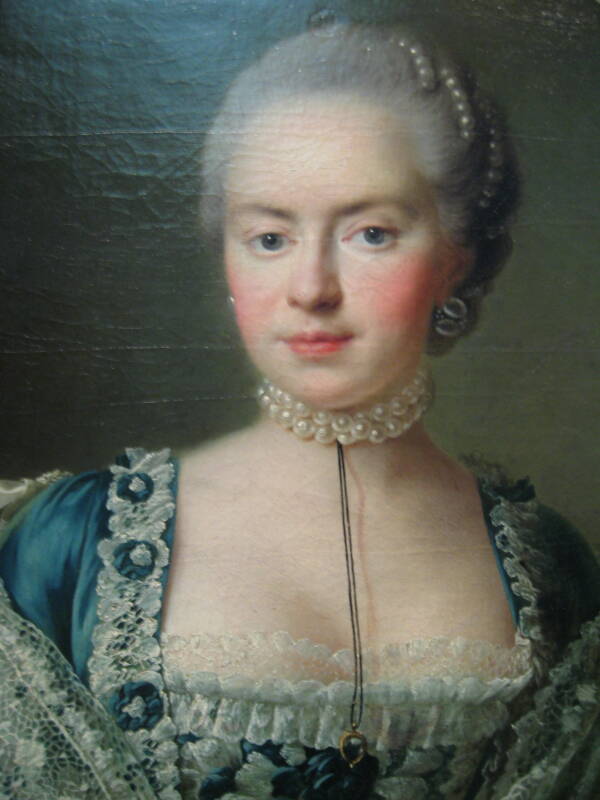 Wikimedia CommonsThis portrait is often mistakenly attributed to be that of noblewoman and murderess Darya Saltykova, but is actually a portrait of a lady in waiting to Catherine the Great, named Darya Petrovna Saltykova.

Saltykova was allegedly a savant in violence. Her methods and weapons were diverse. She tossed boiling water on her victims, stashed logs in every room with which to beat the girls to death, set fires on their raw flesh, and pushed the girls down the stairs for minor infractions.

It was also said that she tied them up and left them naked in the cold.

Later, Darya Saltykova claimed that her rage and violence stemmed from the victims’ carelessness at keeping up her estate. However, considering the very targeted demographic and young age of her victims, some have determined that the youth and promise of the young girls set Saltykova to vengeance given her unhappy personal life.

Whether or not this was the case, the noblewoman did express personal and romantic frustrations through violence.

Around 1762, her lover, Nicholay Tyutchev, left Saltykova to marry another woman. Frenzied from jealousy and anger, the spurned aristocrat ordered her serfs to bomb the man and his wife.

They warned the couple, and no harm came to them, unlike the many, many serf girls in the murderess’ employ.

The Politican Who Would Saltykova’s Demise 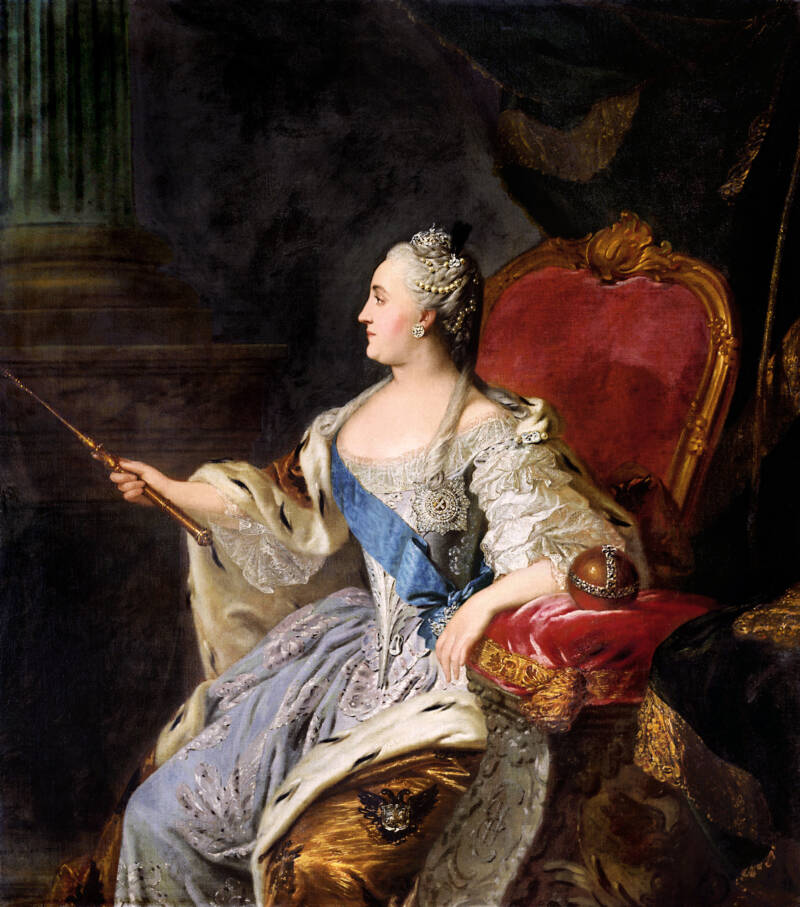 GoogleCatherine the Great’s reforms for serfs brought Saltykova’s reign of terror to an end.

Meanwhile, Catherine the Great was born Sophie Friederike Auguste, Prinzessin von Anhalt-Zerbst in a minor German state in 1729. It would be the reforms and strong rule in her later life that earned Catherine the moniker “the Great.” Yet in some ways, she was nearly as ruthless as Saltykova.

She married the heir apparent to the Russian throne and ultimately staged a coup that overthrew her husband and led to his death.

However, as a politique and an admirer of the Enlightenment, Catherine was determined to drag Russia into modernity. She stopped short of freeing the serfs, but under her reign, they did garner some rights. Most notably, undue cruelty towards the serf class was forbidden in the time of Catherine and the workers had the right to complain against their masters.

But according to Isabel De Madariaga’s “Catherine II and the Serfs: A Reconsideration of Some Problems” in The Slavonic and East European Review, despite Catherine’s gift as an administrator, in a country the size of Russia with its fiercely stratified society, to adequately intervene on behalf of serfs proved nearly impossible.

An End To The Reign Of Terror

That is how a whopping 21 complaints from serfs against their mistress Saltykova went ignored. It wouldn’t be until the 22nd complaint in 1762 that Saltykova’s bloody reign was finally ended.

A stable-hand in Darya Saltykova’s employ overcame his fear of crossing the mistress and reached out to Catherine the Great personally. He revealed to her that the noblewoman killed not just one, but three of his wives in succession.

Catherine the Great was on a razor’s edge politically. She wanted to prove to the masses that she cared about them, but she also needed to assure the ruling class that Russia would not become a free-for-all.

Multiple witnesses were thus called into a two-year investigation of the murdering aristocrat, during which Saltykova was held in a cell in a Moscow monastery. 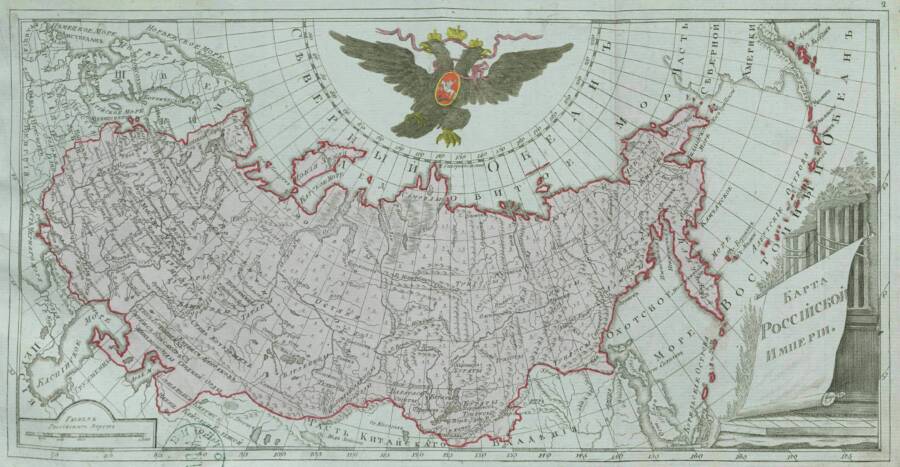 GoogleA view of Russia in the 18th century.

According to “Criminal Investigations Before the Great Reforms” in Russian History by John P. Ledonne, the crux of Saltykova’s case lay in whether or not her actions would be considered odobreno acceptable by other countrymen.

Hundreds of peasants testified to this and Saltykova was subsequently accused of beating some 138 of her serfs to death. She faced expulsion to Siberia.

Ultimately, the bloodthirsty countess was found guilty of murdering 38 people, sentenced to spending her life in near darkness and isolation, and allowed out of her cell only for weekly church services, and had only avoided capital punishment because Russia outlawed the death penalty in 1754.

Darya Saltykova died in 1801 after enduring over 30 years of treatment nearly as harsh as that she dealt her serfs.

After this look at Darya Saltykova, Russia’s Blood Countess, read about this woman’s tragic death by hungry pigs, or get a glimpse of Imperial Russia in living color.