These unbeliveable photographs capture the horrifying locust invasion that is sweeping Kenya and other parts of East Africa. 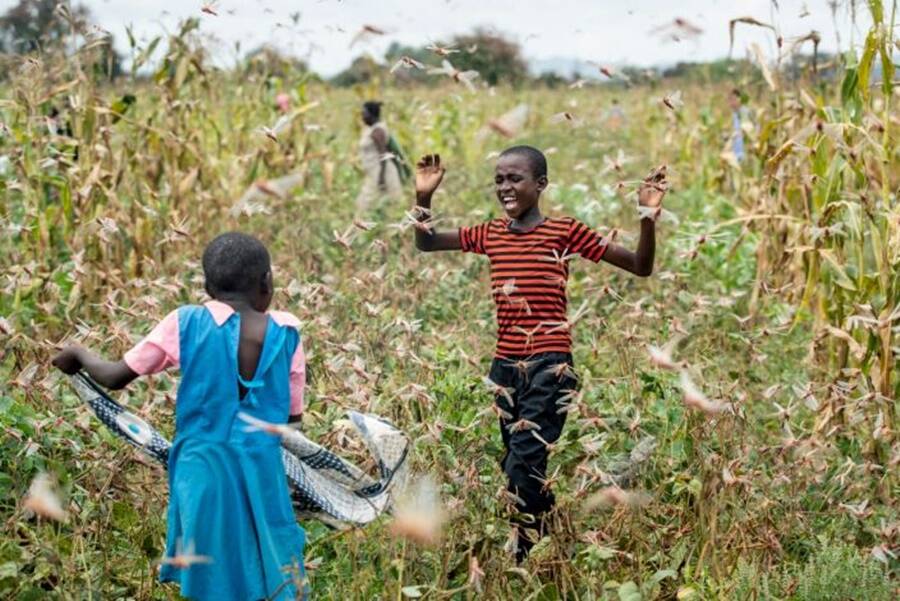 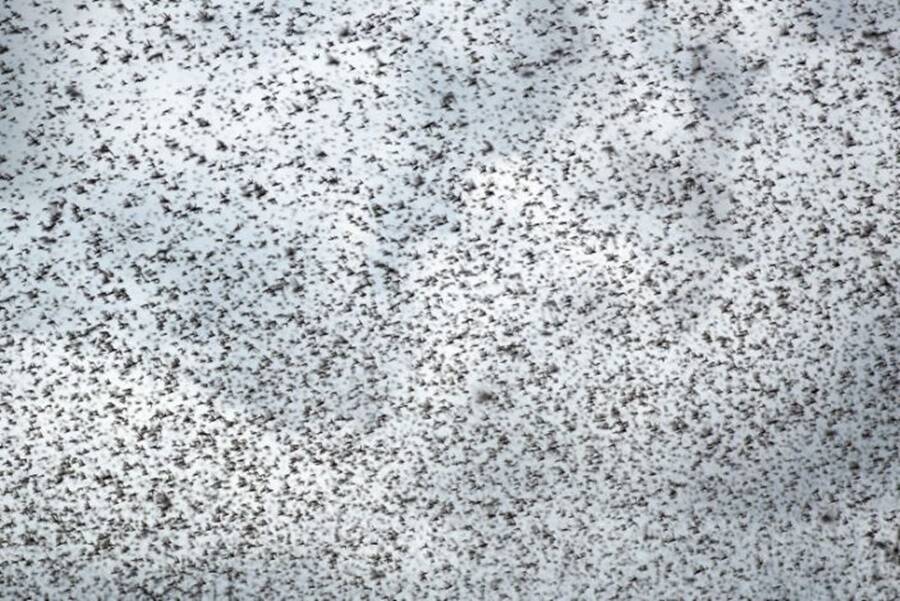 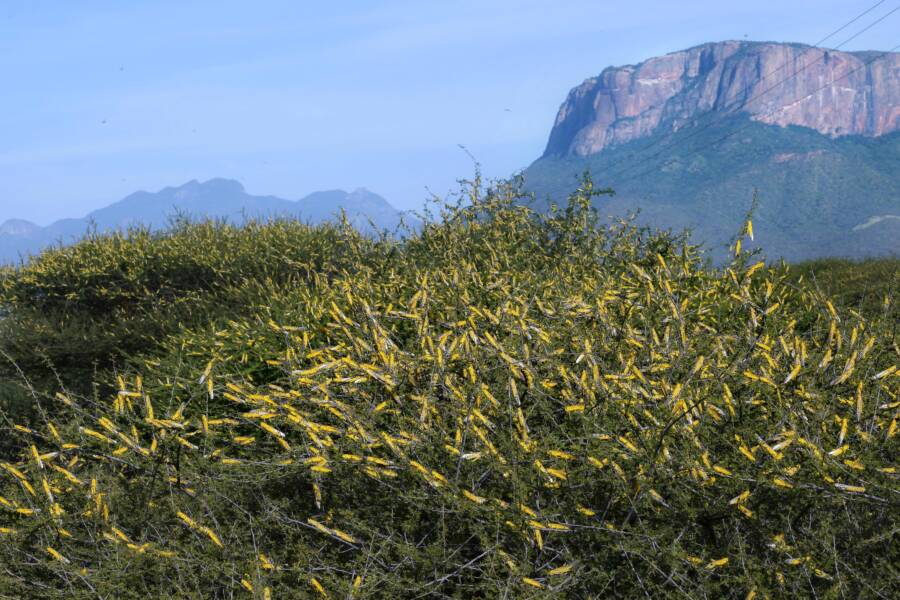 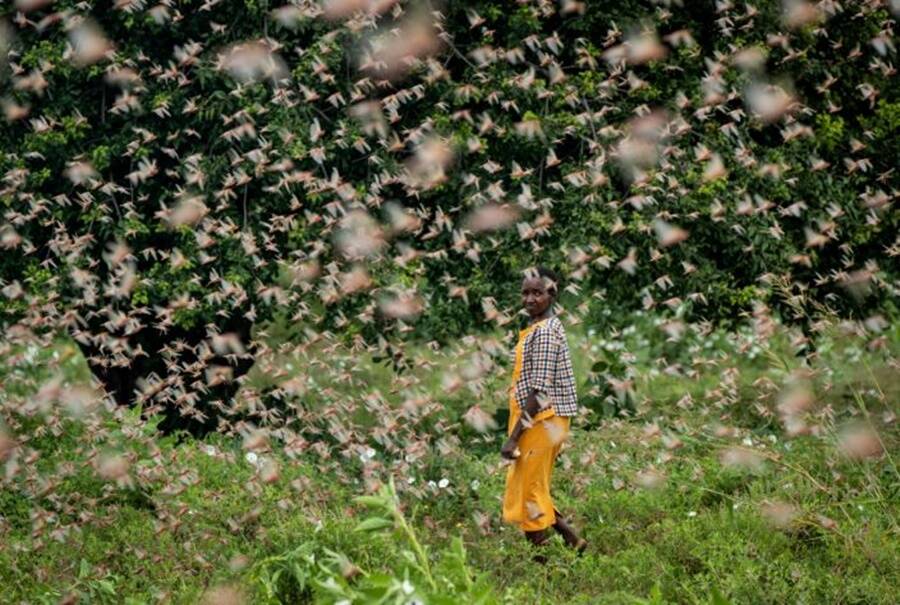 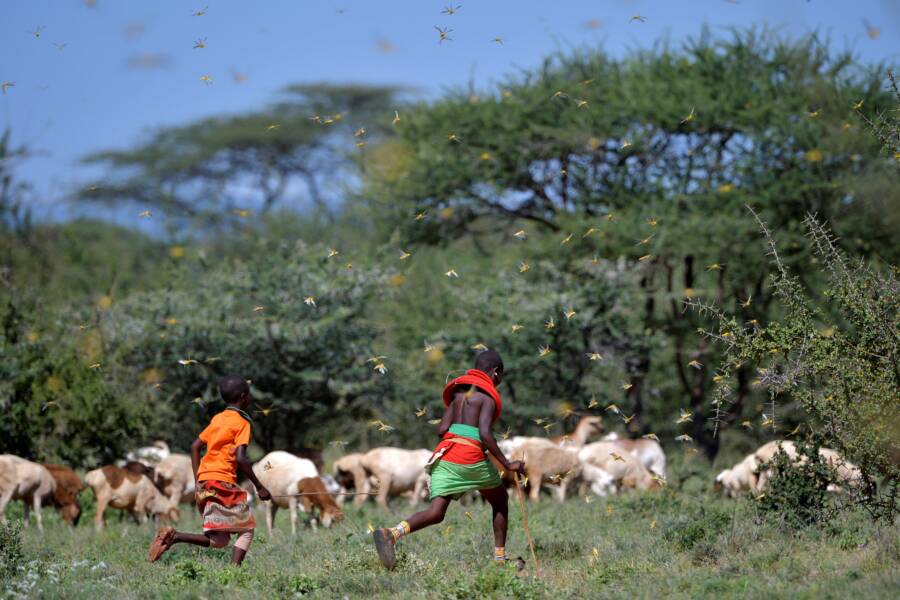 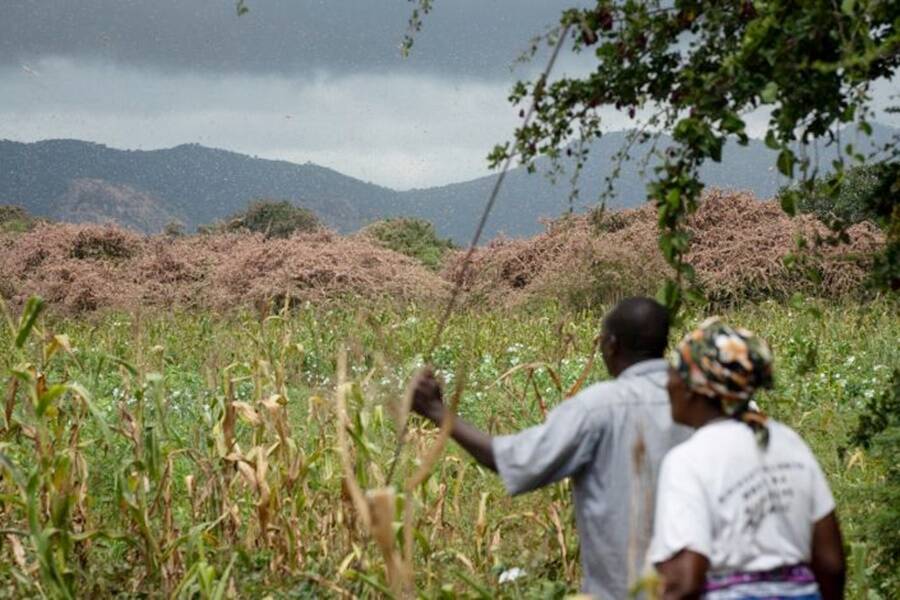 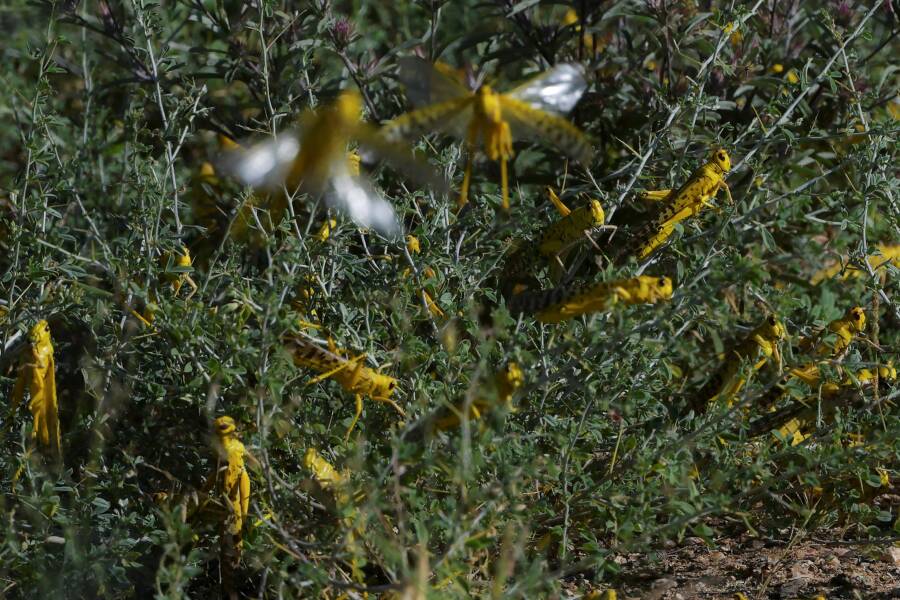 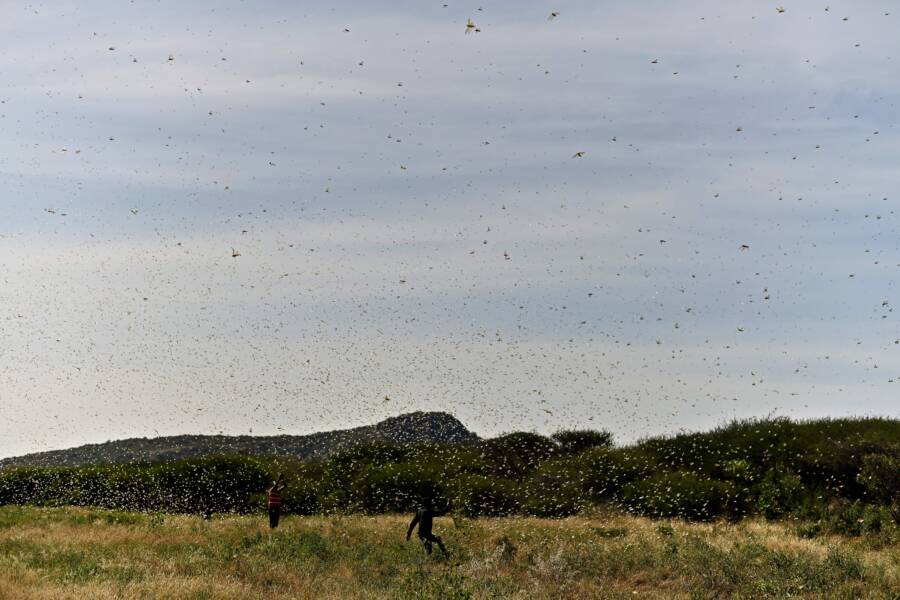 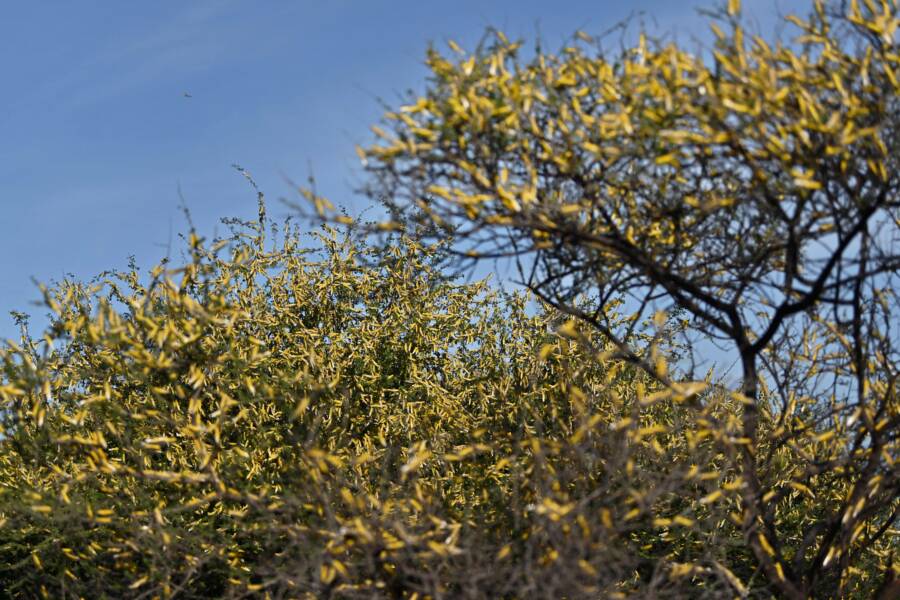 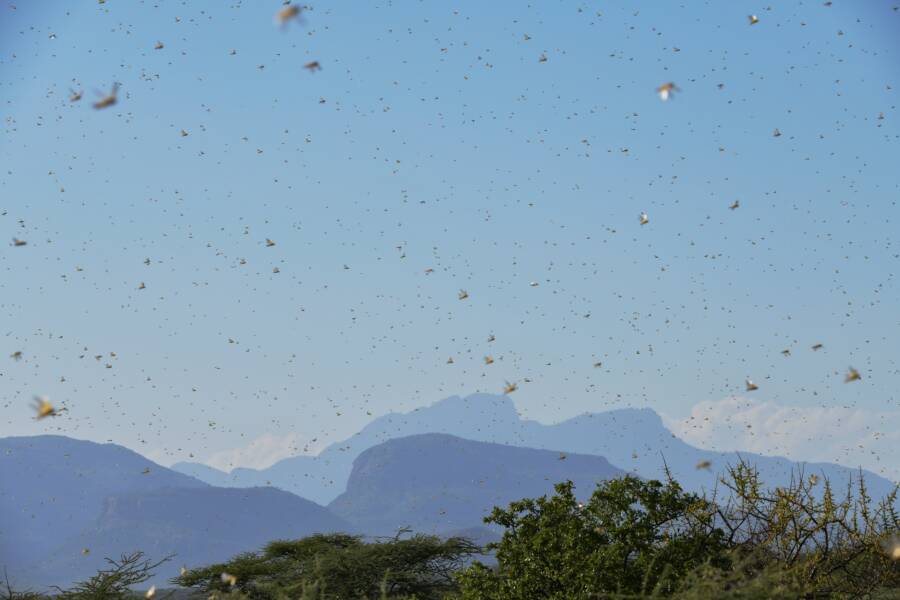 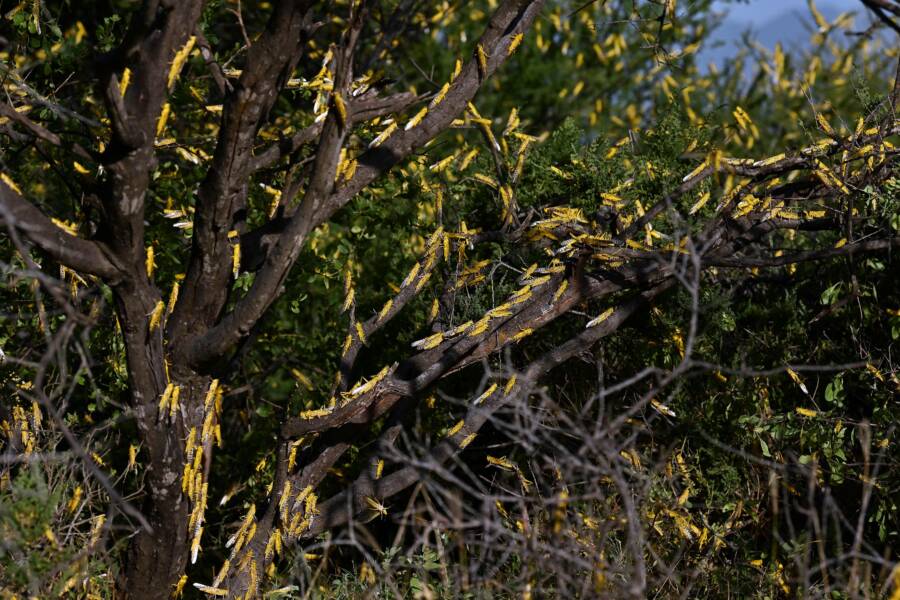 Billions of destructive locusts have swept through East Africa and are now invading Kenya in what many are calling the worst locust infestation the country has seen in 70 years.

Al Jazeera is reporting that the locust invasion has migrated from Ethiopia and Somalia, and has now hit Kenya. The locust swarm began its invasion of the country in December and its numbers have grown rapidly, making it difficult for residents to see through the thick haze of swarming insects.

The UN's Food and Agriculture Organization (FAO) estimated one swarm in Kenya covered 930 square miles, which is almost the size of Moscow. Based on that estimate, there could be up to 200 billion locusts invading the country's skies and farmlands.

The invasion is an unimaginable sight as shown in the gallery photos above. Residents like Ndunda Makanga have tried to scare away the locusts by banging pans and waving sticks around in the air but their last-ditch efforts have come up empty.

"Even cows are wondering what is happening," Makanga, who is a farmer and spent hours trying to chase the destructive pests away from his crops. "Corn, sorghum, cowpeas, they have eaten everything." 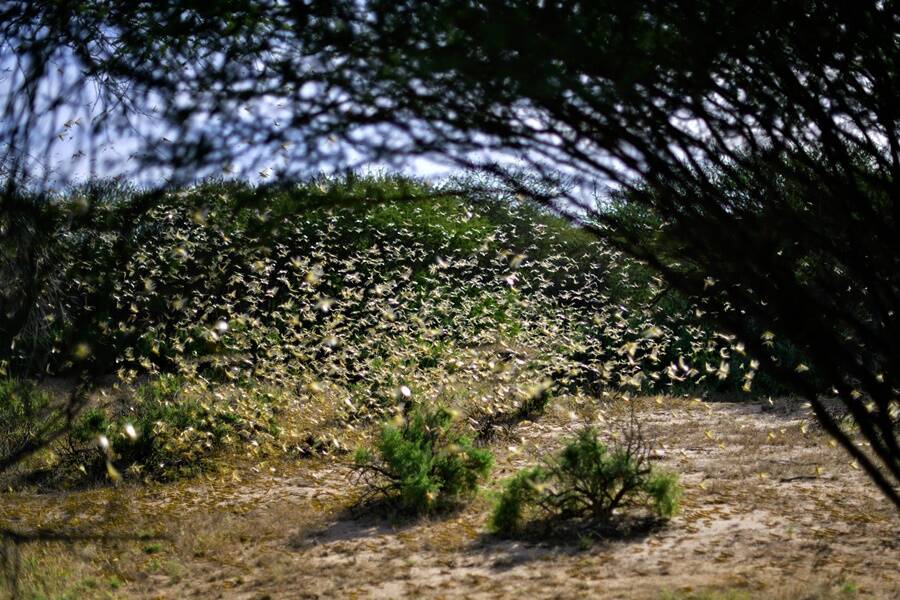 Tony Karumba/AFP via Getty ImagesDesert locusts are the most destructive species of its kind with a ravenous appetite and quick mobility.

Kenya has experienced locust invasions before but it's been decades since the last time the country saw anything on this scale.

When these destructive pests cause a region-wide invasion, it is known as an "upsurge." But authorities warn that if the locust population is not contained it could grow into a "plague" and spread even wider throughout the African continent. There were six major locust plagues in the 1900s, the last of which was during the late 1980s.

These seemingly harmless insects can cause mass destruction in large numbers as they eat their weight in crops like cabbage and corn daily, quickly destroying crops and fodder in the process. According to Jens Laerke of the UN's Humanitarian Office, a small swarm of desert locusts can consume enough food for 35,000 people in one day. In addition to their ravenous appetite, the species is notoriously difficult to control as they can easily move over 90 miles of land each day.

If the locust invasion worsens, experts warn of a possible food shortage in Kenya and other parts of Africa, areas where food security is already a major issue. 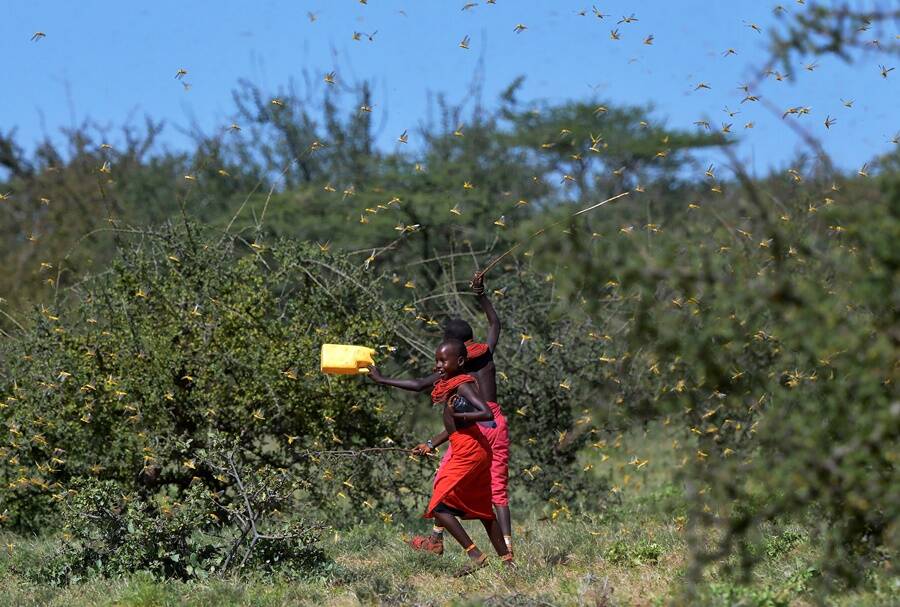 "We must act immediately and at scale to combat and contain this invasion," said David Phiri, FAO's subregional coordinator for Eastern Africa. "As the rains start in March there will be a new wave of locust breeding. Now is, therefore, the best time to control the swarms and safeguard people's livelihoods and food security, and avert further worsening of the food crisis."

But containing the locust infestations might be easier said than done. To completely combat their massive numbers, the UN estimated that Kenya would need $70 million in aerial pesticide spraying which is the most effective way to kill the locusts. Even if they could gather enough anti-pest spray, distributing such aid would still be difficult to perform in conflict-ridden areas like Somalia.

So far, the government has deployed five air crafts to distribute the locust pesticide from above and four others to conduct surveillance. But locals say the aerial sprays have not been enough.

"They told us that we will not see them again but there are still many of them spotted yesterday and today on trees and vegetation in the farm," said Emmanuel Kubai, a resident of Igembe North where residents have tried to shoo the locusts by throwing rocks toward the infested crops. 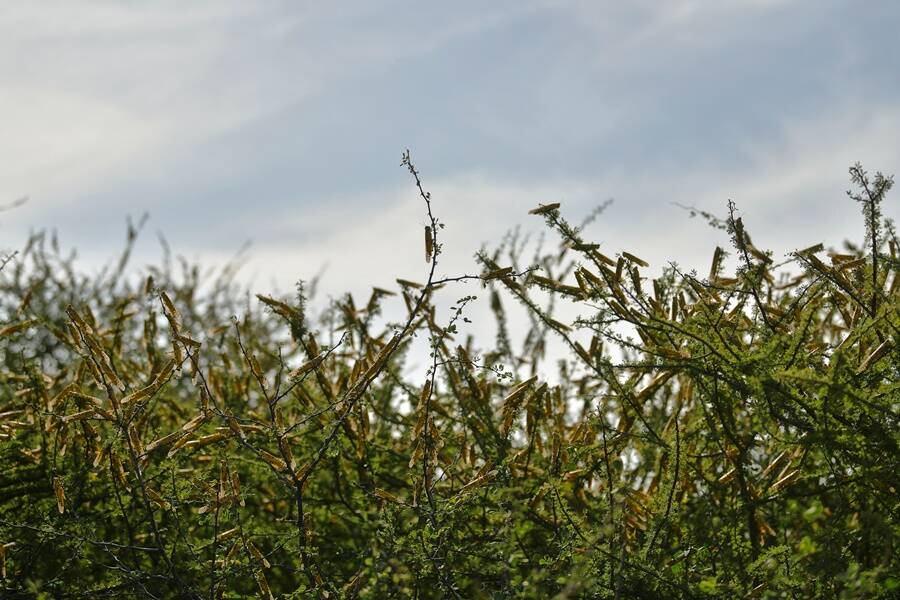 Tony Karumba/AFP via Getty ImagesThe warming of the Indian Ocean could have possibly caused the extreme weather conditions which have led to the severe locust invasion.

Guleid Artan, a representative of the regional expert group the Climate Prediction and Applications Centre (ICPAC), said that Kenya's horrific locust invasion could possibly be a result of the extreme warming of the Indian Ocean, a climate condition known as the Indian Ocean Dipole. The environmental phenomenon has caused extreme weather patterns around the regions, including a devastating drought and eight cyclones off East Africa last year.

Similar to the extreme environmental conditions that have rocked East Africa, the Indian Ocean Dipole also led to the devastating bush fires, and hail and dust storms in Australia.

Next, read about the huge crack that opened up in Kenya proving Africa is splitting up and how climate change and farming are depleting bone-thin Grizzly Bears of its salmon prey.