Had Georg Elser's bomb exploded 13 minutes earlier on November 8, 1939, Hitler would have been blown apart in a Munich beer hall just after the start of World War II. 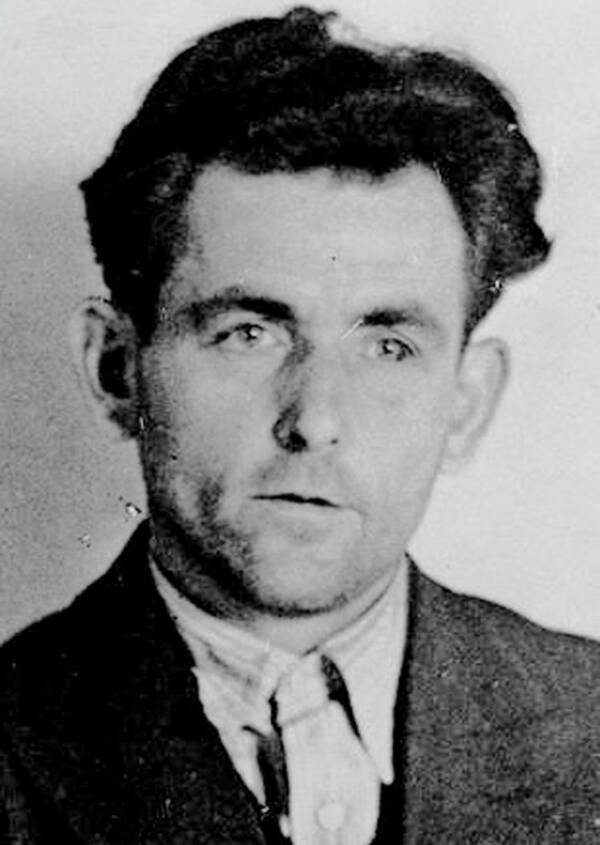 When asked by his Gestapo interrogators why he tried to kill Adolf Hitler, Georg Elser replied [PDF]: “The discontent within the working class, which I noticed since 1933, and the suspicion of an imminent war, which I had since fall 1938, was prominently on my mind.”

A shorter explanation adorned the top of a commemorative stamp issued in Germany in 2003: “I wanted to prevent the war,” or “Ich hab den Krieg verhindern wollen” in the original German. Georg Elser came within just minutes of doing exactly that.

Who Was Georg Elser? 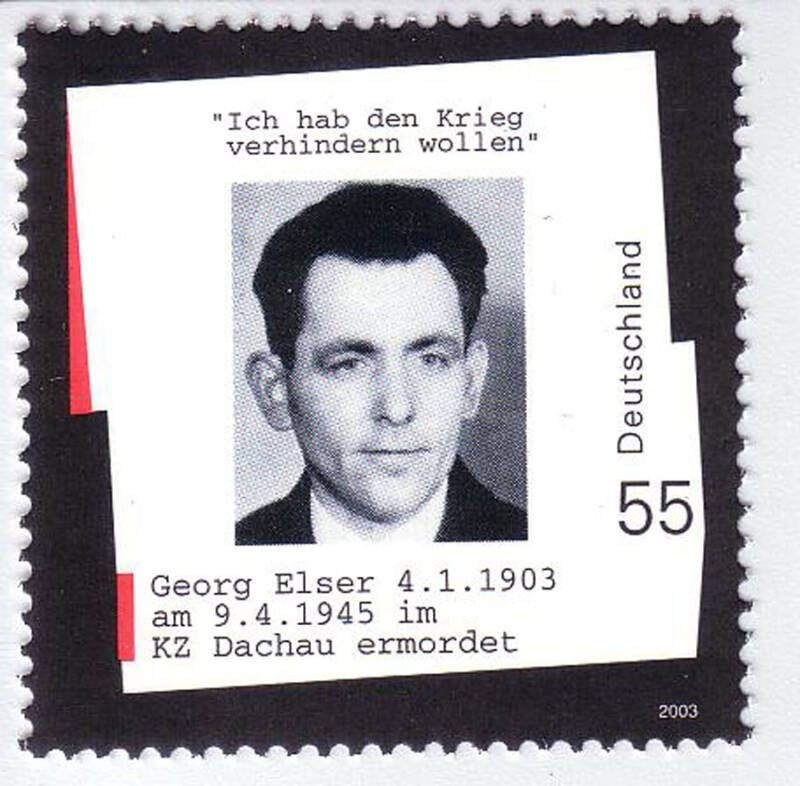 Johann Georg Elser was born on January 4, 1903, to Ludwig Elser and Maria Müller. Not known for his intellect, Elser was good at working with his hands and at the age of 14, he began working for his father in the timber business.

In 1919, he began working as a furniture maker and in 1925 he briefly worked at a clock factory. In 1930, those two careers merged when he moved to Switzerland and began making the wood housing used for wall clocks.

Then, in 1936, he began working at a Nazi-run Waldenmaier Armament Factory. This later proved essential to his assassination attempt as he basically had free run of the place, which included access to black powder, detonators, and fuses.

Elser rarely read newspapers and appeared to have little to no interest in politics for most of his life beyond its impact on the labor movement. He did join the Roter Frontkämpferbund — the Red Front Fighters’ League — a paramilitary organization associated with the German Communist Party during the 1920s. However, his tenure with the organization was brief, and reportedly he only joined so he could play in its brass band.

The one crucial exception for Elser was his hatred for the Nazi party, particularly their economic policies. Working hours were long and vacations were few under their rule. Additionally, wages were frozen, and — most importantly for Elser — trade unions were banned.

Elser was incensed that members of the Nazi party enjoyed benefits denied to ordinary citizens like himself. He reportedly refused to give the Nazi salute as far back as 1933 and didn’t listen when Hitler was on the radio. Likewise, he is said to have turned his back and whistled when a pro-Hitler parade passed through his hometown.

In early 1938, Elser made up his mind to take matters into his own hands and attack Hitler directly.

Asked by interrogators about that decision, Elser responded: “I considered that the situation in Germany could only be changed by the elimination of the current leadership. By leadership, I mean the brass, like Hitler, [Hermann] Göring, and [Joseph] Goebbels.” 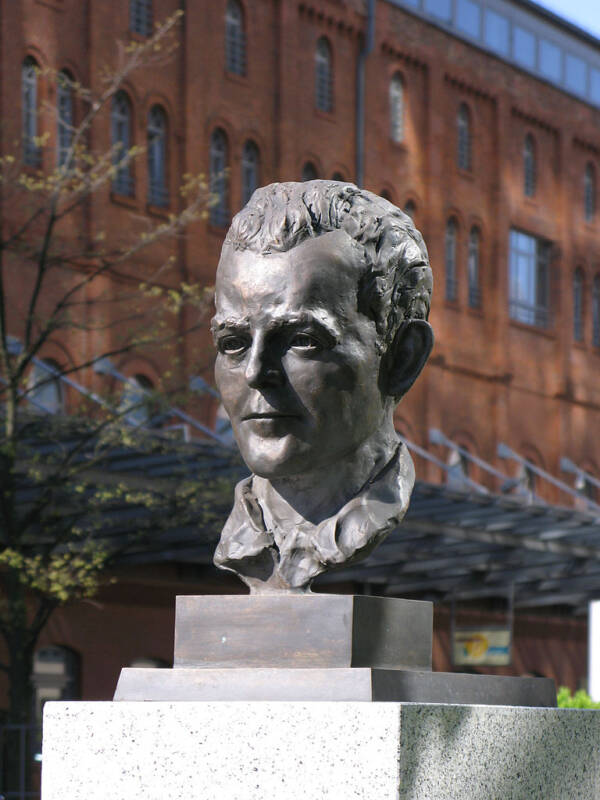 Wikimedia CommonsBust of Georg Elser in Berlin in front of the Federal Ministry of the Interior on the “Street of Memories”; Sculptor: Kay Winkler

Elser realized early on that he would need to know a specific time and location for Hitler in the future to carry out an assassination. Fortunately, there was one annual event that remained a constant fixture in Hitler’s schedule. Every Nov. 8, Hitler traveled to Munich to give a speech at the Bürgerbräukeller beer hall to commemorate the Beer Hall Putsch, the abortive attempt by Hitler and the Nazi party to launch a coup against the Weimar Republic in 1923 that set the stage for the Hitler’s rise to power.

So, in November 1938, Elser traveled to Munich to scout out the Bürgerbräukeller and began planning his attack. He made two important observations on that initial trip. First, security was lax at the beer hall, with Hitler opting to use rank-and-file members of the Nazi party instead of the Munich police. Second, he noticed a stone pillar located behind the speaker’s platform that supported a large balcony overhead.

By his calculations, a large bomb placed within that pillar was capable of bringing down the entire balcony. In this way, he could bury not only Hitler but also a number of his ministers and supporters. 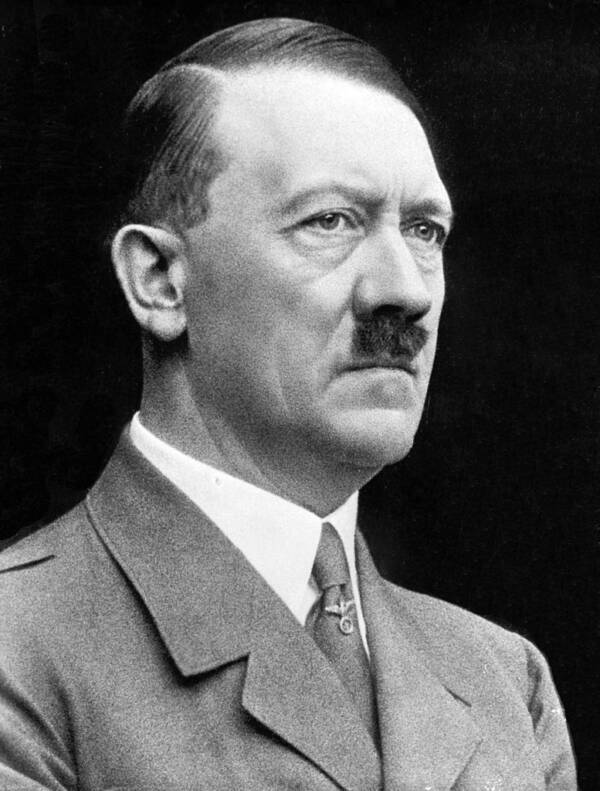 Knowing he only had a year to get ready, Georg Elser worked methodically, smuggling 110 pounds of high explosives from the Waldenmaier Armament Factory as well as high-capacity detonators.

Elser later told his Gestapo interrogators: “Before the decision to take my action in the fall of 1938, I had stolen neither parts nor powder from the factory.”

Preparing For The Bürgerbräukeller Bombing

In April 1939, Elser took another trip to Munich to take some photos of the Bürgerbräukeller and to measure and record the dimensions of the beer hall and pillar. He then started work on designing a sophisticated time bomb. In July, he tested a couple of bombs at an orchard his parents owned.

Satisfied with the results, he moved to Munich in August 1939 to begin final preparations. Already aware of the Bürgerbräukeller’s lax security, Elser became a regular customer at the beer hall, taking his dinner there nightly.

Next, he would hide in a storage room upstairs until the building was locked up for the night. He would then emerge from hiding and begin work on carving out a hole in the pillar for his bomb.

Work was painstakingly slow. He spent three full nights just removing some wood that surrounded the pillar. Next, he began carving out a hole in the pillar using a hammer and chisel. To conceal the noise, he timed his hammer blows to coincide with the automatic flushing of the building’s urinals and the passing of streetcars.

He was careful to sweep up every speck of dust and stone to leave behind no evidence of his work. He also had to carefully replace the wood before escaping out a side door early in the morning before the beer hall opened. In all, it took him 35 nights to complete this work.

Finally, he planted his bomb in the pillar. He armed it with two timers for added reliability and to minimize the noise of the clockwork he lined the cavity of the pillar with cork.

Elder knew from his research that Hitler started his speech every year at about 8:30 PM and spoke for about 90 minutes. So, he set the timer of his bomb to explode at precisely 9:20 PM, roughly the halfway mark of the speech.

And Then, Everything Went Wrong For George Elser 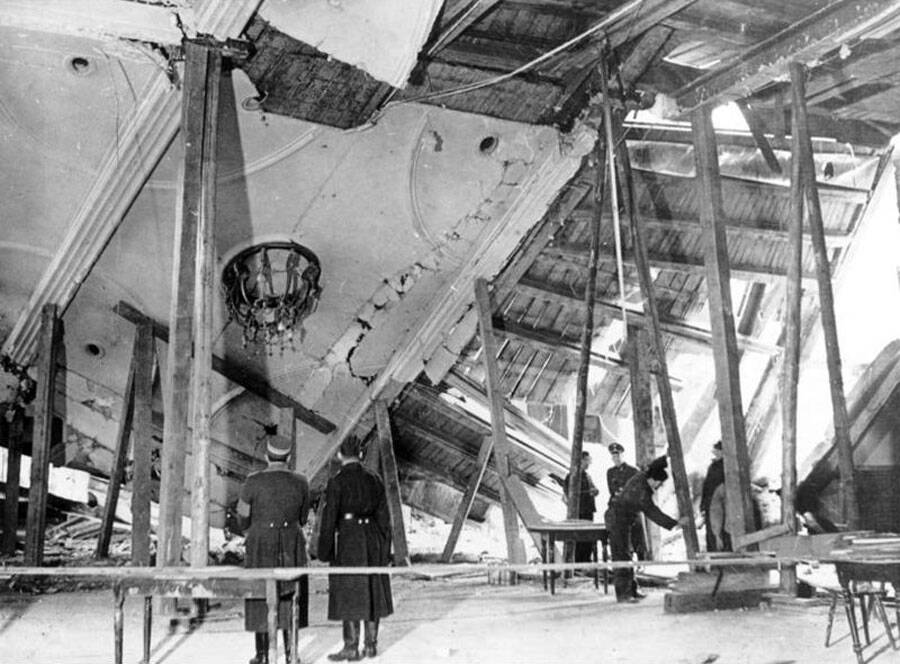 Adolf Hitler reportedly said that he had the “luck of the devil.”

Hitler had initially planned on flying back to Berlin after his speech to work on plans for the war now that it was officially underway. However, local weather reports called for dense fog on Nov. 8, making air travel hazardous. So, Hitler decided to return to Berlin using a private train. However, this necessitated moving the start time of his speech up to 8:00 p.m., and it was shortened to about an hour.

As a result, Hitler concluded his speech at 9:07 PM and quickly departed without his usual drink with local Nazi members. Elser’s bomb exploded as planned 13 minutes later and brought down the entire building, killing seven people immediately and injuring over 60 others. However, as the stage had been emptied, none of the bomb’s original targets were among them.

Elser took a train to Konstanz, a German town near the Swiss border the morning of Hitler’s speech. When darkness fell, he headed out towards the border on foot and attempted to cross, but was quickly stopped and arrested by border guards. 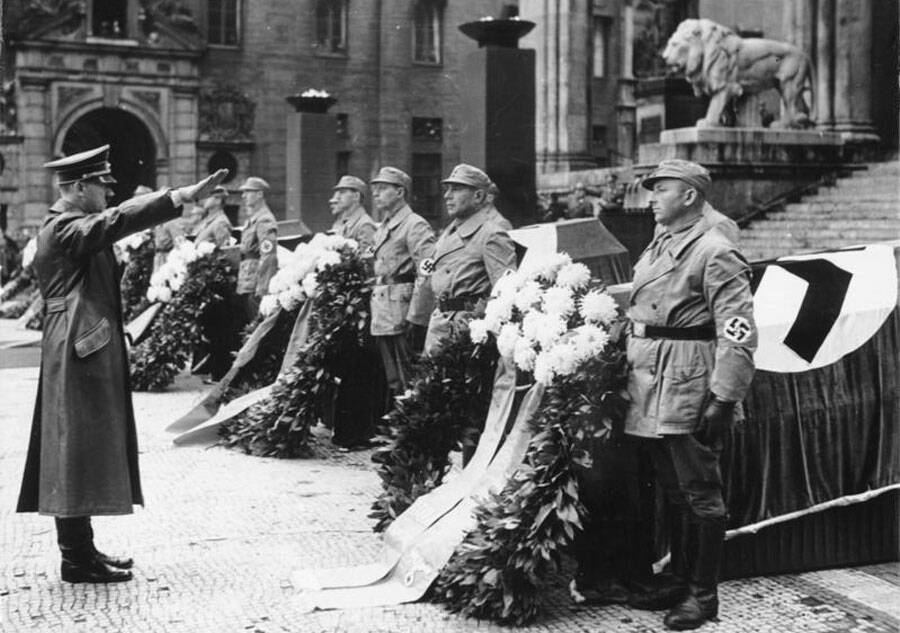 Concerned that the Nazis would try to blame someone else for Hitler’s assassination, Elser had planned on sending bombmaking components along with schematics of the bomb and his drawings of the Bürgerbräukeller.

When the border guards received news about the attempted assassination, they transferred Elder to Munich, where the Gestapo interrogated him.

Evidence was gathered that was overwhelming. For example, some of the clockwork found at the beer hall had a legible maker’s mark identifying it as coming from the watch factory where Elser used to work. Additionally, one of the waitresses from the beer hall identified Elser as did one of the men he purchased materials from in Munich. 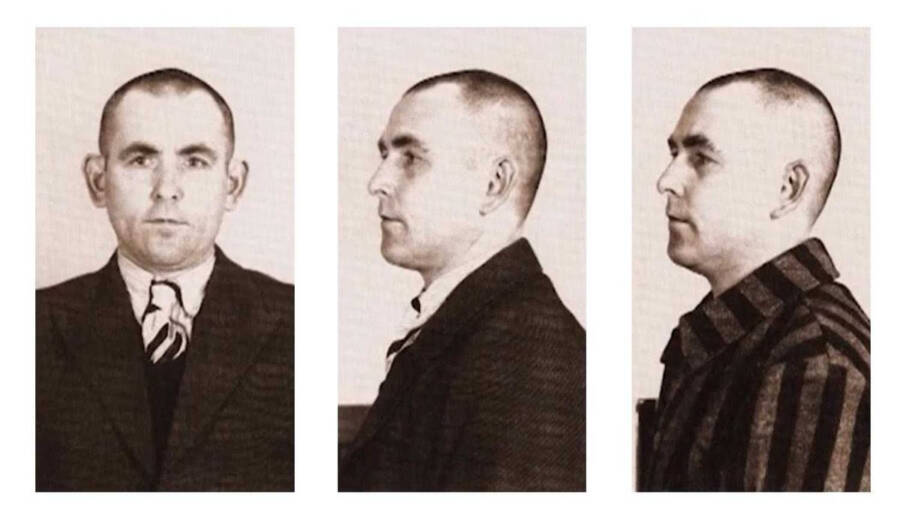 German Resistance Memorial CenterPhotos taken by officials at Dachau concentration camp after Georg Elser was transferred there in 1945. He was executed on April 9, 1945, just weeks before Germany would surrender to the Allies.

Georg Elser signed a confession on the 15th of November. However, his problems didn’t end there. For one thing, Hitler refused to believe that a German would dare attempt to assassinate him. Additionally, Hitler insisted that Elser was working for British intelligence services.

Elser was transferred to Berlin on the 18th of November for further interrogation to get the “confession” they wanted. Reportedly, he was interrogated by Heinrich Himmler, the dreaded head of the Nazi SS. He continued insisting that he acted alone, telling his interrogators that:

I also had the intention, and considered in detail, to write from Switzerland to the German police to explain that I was the sole culprit in the assassination, no accomplice or accomplices have I had. I would have also sent along an accurate drawing of my apparatus and a description of the execution of the deed, so that one could verify my claim. With such a message to the German police, I just wanted to ensure that under no circumstances would any innocent person be arrested in the search for perpetrators.

Elser never received a trial for the Bürgerbräukeller bombing. After spending a year in Berlin being tortured by Gestapo officers, he was transferred to Sachsenhausen concentration camp, where he was held until 1945.

With German defeat looming in the Spring of 1945, Elser was transferred to Dachau concentration camp in April, where he was shot dead on April 9, 1945, just four weeks before the end of World War II in Europe. 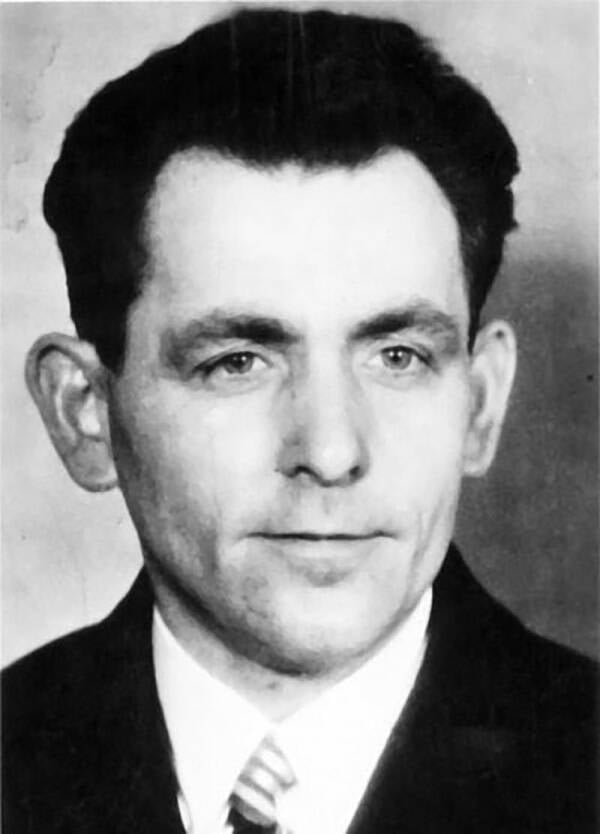 German Resistance Memorial CenterGeorg Elser is honored in Germany as a part of the German resistance to Nazism before and during the war.

German political journalist Claus Christian Malzahn wrote about Elser in 2005. “That he was for so long ignored by the historians of both East and West Germany, merely goes to show just how long it took Germany to become comfortable with honestly confronting its own history,” he wrote.

“Johann Georg Elser, though, defied ideological categorization—and for that reason, he is a true German hero.”

The theatrical trailer for the film 13 Minutes.

Now that you read the story of Georg Elser, the man who missed killing Hitler by 13 minutes, check out the story of the Edelweiss Pirates, the German youth gang of Nazi Resistance fighters. Then read about the last five remaining members of Adolf Hitler’s bloodline and how they are determined to be the last.